O'Neill proves it with a 15-12 victory over Aquinas 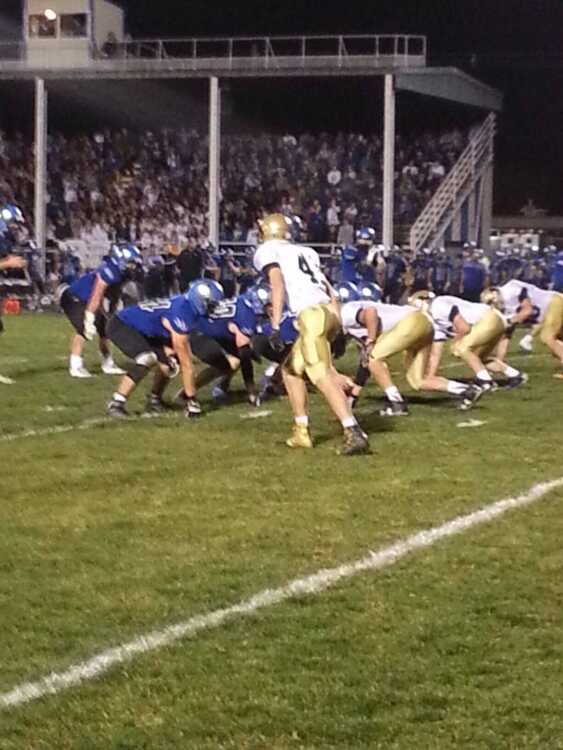 O'Neill proves it with a 15-12 victory over Aquinas

O'Neill, Ne. - The headlines around the state may tell the tale of O'Neill pulling the 15-12 upset over mighty David City Aquinas, but even the Monarchs know that this was not necessarily an upset.

Those who were lucky enough to witness this heavyweight battle, pitting two of the best Class C-1 football teams in all of Nebraska, saw what could very well have been a State Title matchup.

Fittingly, what proved to be the winning touchdown, came on an NFL-type, highlight reel, impossible 9 yard scoring catch made by O'Neill wide receiver Wyatt Liewer with 5:54 left in the game, and someone's season. Junior QB Alex Thramer delivered the perfectly timed pass.

So incredible was the catch, it is literally not possible to describe it words and do it justice.

One handed catch, covered like a blanket, one foot inbounds, falling down with a football that literally knocked the life-sustaining breath out of your body........that is precisely what Mr. Liewer, the 6-2, 160 pound junior pulled off, against one of the mightiest defenses in all of Nebraska high school football.

When I saw this O'Neill team beat Boone Central/Newman Grove earlier in the year and lay a running clock on the Cardinals to boot, I knew what caliber of football team I had just witnessed. Successful in both basketball and wrestling a year ago, this group was ready to do some damage on the gridiron in 2016.

A 6th place finish in wrestling, and a state basketball tournament game where they had eventual state champion Wahoo Neumann on the ropes for a while, signalled success signs with a majority of those young men returning for the 2016/2017 sports seasons.

If you follow high school football closely, you knew that both Aquinas and O'Neill have great defenses, but no team had done it better than Aquinas, now even allowing 150 yards a game all season long.

The Monarchs thrive on the run offensively, O'Neill can run too, but the Eagles air attack, led by Alex Thramer and a trio of glue-handed, basketball, high leading receivers, looked like that might make the difference in the dream matchup..........and it did.

Things certainly did not start that way for O'Neill quarterback Alex Thramer. The 6-3 junior connected on just 1 his first 4 passes in the first quarter. Things changed after that.

After forcing punts on the Monarch's 1st three possessions, O'Neill opened the 2nd quarter on their own 32 yard line. Thramer immediately found his throwing accuracy.

The junior nailed Wyatt Liewer with a 34 yard aerial, a leaping, acrobatic grab at the Aquinas 34. Three plays later, the rangy, tough to tackle signal caller, connected with Bryce Heiser for an 18 yard scoring pass. Liewer (of course) booted the PAT and the Eagles led 7-0.

The teams traded punts on the following possessions, then Aquinas did what they do well.....respond in crunch time.

Ron Mimick's offense took over on their own 23 with 2:58 showing on the clock. Not a problem.

The critical PAT kick sailed wide right and O'Neill took a 7-6 lead into the halftime break, but Lane Napier was already on his way to a great rushing night with 78 yards on 10 touches and a score for the Monarchs.

O'Neill came out firing up the aerial game in the 3rd quarter. Alex Thramer hit physical specimen Corbin Dean for 19 yards, then connected with standout junior Justin Appleby for gains of 8 and 16 yards, but Aquinas stiffened and forced an Eagles punt.

The defenses continued to prevail throughout the 3rd quarter, although O'Neill penetrated all the way to the Aquinas 19 yard line once before the Monarch sophomore Miles Eggleston sacked Thramer for an 8 yard loss on a 4th and 5 for that 19 yard mark.

Once again, with less than 3 minutes remaining in a quarter, the Aquinas offense kicked into gear, mixing the run and pass well.

A key play in that drive may have been when basketball star Tyler Regan spilled Lane Napier for a 3 yard loss at the O'Neill 47.

The play apparently did not set well with Napier because 2 plays later, the senior sensation ripped through the Eagles defense, shedding and shredding would-be tacklers on a 36 yard touchdown dash.

That gave Aquinas their 1st lead of the game, 12-7 with no time showing in the 3rd quarter.

All I can figure, is the Aquinas score must have produced the same results for O'Neill.

After muffing the ensuing kick return to open the 4th and money quarter, the Eagles began the possession on their own 10.

Alex Thramer and the Eagles air show then went to work.

Aquinas looked like they might stall the O'Neill drive at the Monarch 27 when junior LB Daniel Reiter broke up a Thramer pass. But Thramer came right back with a scrambling 15 yard strike to Appleby.

After a 5 yard false start penalty and a 10 yard run by Jake Young to the Aquinas 7 yard line, the Eagles had already drained 5 minutes off the 4th quarter clock.

Now the stage was set for the miracle catch by Wyatt Thramer.

Thramer again gave the ball to Jake Young, but the Monarchs rudely greeted 175 pound senior with a one yard loss, placing the pigskin at the Aquinas 9.

With the scoreboard reading 3rd and 7, Alex Thramer sent Wyatt Liewer on a "V" route, a pattern where Wyatt fakes inside, then cuts to the corner.

Thramer rolled right and lofted a picture perfect floater to Liewer, who was very well covered by Aquinas defender, Tyler Vavrina, one of the best. Liewer jumped to the moon, pulling the ball down with one hand, his foot coming down a inch from the out-of-bounds line for a dream touchdown grab.

Liewer remained on the ground for some time after the miracle catch, apparently having the wind knocked out of him.

Thramer nailed Justin Appleby for the double PAT, and O'Neill had a 15-12 lead with 5:54 left in the C-1 Quarterfinal playoff game.

Aquinas advanced the ball from their own 33 to the O'Neill 36 on the ensuing possession before Rech fired an incomplete pass on a 4th and 6.

O'Neill took over with 3:53 left in the 4th, but two straight great defensive pass coverage plays by the Monarchs gave the defending C-2 Champions one more shot with 2:28 left in the game.

Aquinas advanced to the O'Neill 30 before facing a critical a 3rd and 5. Rech fired a pass into tight coverage but Eagles defender Jake Young promptly broke it up.

One play later, with 1:22 left, Young went one better than a defended pass......he intercepted the Rech aerial, giving the ball back to O'Neill.

The Eagles Alex Thramer took a knee three times and the undefeated O'Neill football team had secured themselves a C-1 Semi Finals date with Boys Town at the Correl, on the Cowboy's campus west of Omaha.

Alex Thramer ended his night by connecting on 18 of 28 passes for 271 yards and two touchdowns. Game hero Wyatt Liewer led the receiving corps with 121 yards on 6 receptions and, of course, the miracle TD catch.

Justin Appleby and Bryce Heiser each had 5 catches for 64 yards.

Bailey Thompson led the ground attack with 44 yards on 10 carries, while Jake Young added 41 yards on the identical number of touches.

O'Neill piled up 393 yards of total offense for the night.

Jake Young led the Eagles defense with a slew of tackles, 17 to be exact. Sophomore Spencer Davis recorded 11, while the O'Neill "D" had 6 tackles for losses when it was all said and done.

For Aquinas, Lane Napier rushed 23 times for 136 yards and both Monarch touchdowns and was did his usual unbelieveable job defensively.

Aquinas ends their season at 8-2, while the Eagles improve to a perfect 11-0 and will face a Boys Town team that pitched a 25-0 shutout at Arlington in their quarterfinal game.