No. 1 Aquinas prevails in opening round C-1 "Dream Matchup" 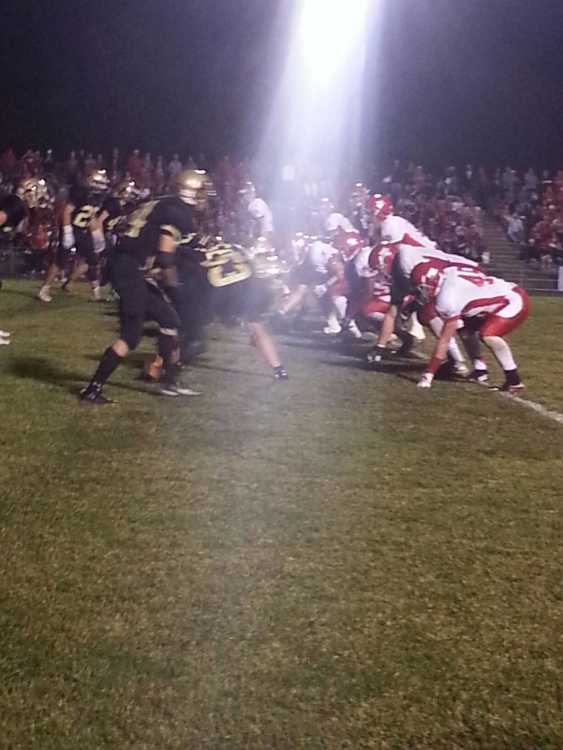 The Aquinas defense facing Norfolk Catholic in the shadow of their own goal post.

No. 1 Aquinas prevails in opening round C-1 "Dream Matchup"

You just do not want to take a halftime lead over Aquinas and force Head Coach Ron Mimick top to put his genius thinking cap on. I've seen it up close in the Wahoo game earlier this season, and at Hastings St. Cecilia 2 years ago in the C-1 Quarterfinals.

Norfolk Catholic opened up a 14-0 1st quarter lead on Mimick's Monarchs, then took a 17-14 lead to the locker room at the half.

That's all Ron Mimick and defensive coordinator Tony Smith needed to witness. The Aquinas defense went to work after that, two time All-State selection Lane Napier did his thing.....all over the field, and the #1 rated Monarchs pulled away for a 35-27 Opening Round playoff win over powerful Norfolk Catholic.

The Knights sent shockwaves through the Aquinas faithful when quarterback Myles Vrbka found Ethan Stech for a 50 yard gain on the 3rd play from scrimmage. Catholic was already in good shape after Trent Jorgensen returned the opening kick-off from the 1 yard line to the Knights 48.

The 50 yard gain advanced the ball from the Norfolk Catholic 47 to the Aquinas 6 yard line. All-State sophomore running back Dylan Kautz took it in from the 2 a couple of plays later to give the Knights an early 7-0 advantage.

On the Knights next series, Vrbka connected with speedy Christian Prim for a 36 yard hookup, then found the senior All-State candidate for a 26 yard TD just 5 plays later.

Before Aquinas blinked, Norfolk Catholic had a 14-0 lead.

But if you know David City Aquinas football, you also know this football team does not panic.

It took only 6 plays for Mimick's offense to cover 68 yards, with QB Gavin Rech taking it in from the one to complete the drive, and pull the Monarchs to within 14-7 after a quarter of play.

Aquinas opened up the 2nd quarter with a block in the back penalty, which must have forced Mimick to open up his bag of tricks. Facing a 3rd and 18 at the Norfolk Catholic 45, QB Gavin Rech pitched the ball to Lane Napier on an apparent sweep around the right side. Napier then suddenly pulled up and launched a perfect strike to junior end Tyler Vavrina, who slipped his defender, sprinting for a 45 yard TD.

BANG! Things are all square at 14 in this 1st Round Playoff Dream matchup.

The Knights had a chance to score before halftime, but Tony Smith's defense stiffened, forcing the visitors to settle for a 25 yard field goal from Dylan Cattau.

The Monarchs fashioned an old fashion, vintage Aquinas drive to open the 3rd quarter, complete with an astounding, but "nothing out of the ordinary" Lane Napier run on a 4th and 6 play.

The outstanding senior charged through the heart of the Knight defensive line, picked up 3 Catholic defenders along the way, and dragged them 10 yards for an Aquinas 1st down.

But the staunch Norfolk Catholic "D" held, forcing Aquinas kicker Trevor Siroky to attempt an 18 yard field goal, which missed to the right.

The Monarchs would not miss on their next possession........a one play possession at that.

Gavin Rech set the play in motion with a pitch to slotback Andy Lyons, who followed a crunching block by Lane Napier, racing 41 yards to paydirt.

The Lyons TD sprint gave Aquinas a 21-17 lead, an advantage they never relinquished.

Norfolk Catholic pulled to within a point later in the 3rd stanza when 180 pound lineman, Dylan Cattau put a foot into a frozen rope 44 yard field goal.

A terrific kick return set up the Monarchs at their own 44 to begin the 4th quarter, and it was once again time for another time consuming, vintage Aquinas ground attack drive.

This baby took 12 plays, burning 4 minutes, 30 seconds off the clock, before Gavin Rech scored his 2nd TD of the game from one yard out. Siroky added the PAT and the Monarchs had themselves a 28-20 lead with 7:26 left in the game.

Tony Smith's defense came up with another huge play when 222 pound Kyle Rupp pounced on a Knights fumble on the NC 45 yard line after a strange play that saw 2 or 3 Catholic players handle the ball.

The Aquinas offense ran another three minutes and change off the clock, but the stellar Norfolk Catholic held, forcing a Monarch punt that sailed in the end zone for a touchback.

What happened on the next play probably assured Lane Napier of another All-State selection and sealed the Aquinas win in the process.

On Catholic's first play after the touchback, Myles Vrbka lofted a lazy little flat pattern pass intended for Dylan Kautz, but Napier appeared out of nowhere, tipped the pass to himself, and rambled 20 yards for a touchdown.

I haven't seen a play like that since my middle school days. That upped the Aquinas lead to 35-20 with 2:42 remaining.

The Knights were not finished though. Vrbka marched his team straight down the field, nailing Chace Claussen for a sweet 19 yard scoring pass. That pulled the Knights to within 35-27 with 42 seconds left in the game after Cattau booted the PAT through the uprights.

Cattau tried the onside kick on the ensuing play, but sure-handed Tyler Vavrina was there to wrap it up for Aquinas.

Gavin Rech took a knee twice and the deal was sealed, sending the Monarchs up to O'Neill for a 2nd round C-1 playoff date with the undefeated Eagles next Friday.

I'm not certain, but it appeared that Tony Smith may have had All-Stater Lane Napier shadowing Norfolk Catholic's splendid State sprint champion RB, Dylan Kautz all evening. Kautz ran very well, but could only grind out 81 yards on 26 carries and a TD.

It seemed as though Napier made 20 of the 26 stops on the outstanding Kautz.

Norfolk Catholic QB Myles Vrbka had a terrific night throwing the football. The veteran signal caller completed 11 of 22 passes for 251 yards and a TD with one INT.

The Knights complete their season at 6-4. Their four losses coming to playoff heavies Aquinas, Wahoo, Bishop Neumann and O'Neill.