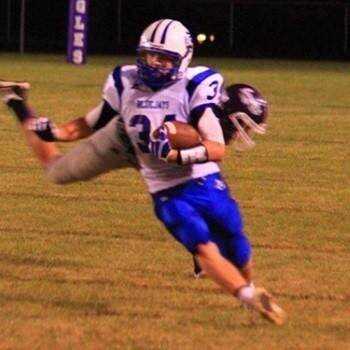 Ashland-Greenwood's Trevor Nichelson as a freshman back in 2013, One of C-1's best ever.

Trevor Nichelson-Ashland-Greenwood - We bid farewell to one of the greatest Class C-1 backs in recent history in the amazing Nichelson. Trevor finished the 2016 season with 1,917 yards and 27 touchdowns in only 8 games.

His statistics will speak for themselves. I will truly miss writing about this young man, who has been so capably tutored by super coach Ryan Thompson, one the very best.

*Moses Bryant - Elkhorn South - Junior sensation hit the 1000 yard plateau for the 3rd time with his 187 yards on 23 carries against Gretna. Big players come up big in Big Games, right?

The Storm swept through the 2016 season unscathed, by besting an outstanding Gretna team, 37-27 in the regular season finale last Friday. Moses parted the Green Sea for touchdown runs of 3 and 60 yards and raised his season rushing total to 1,150 yards with 27 TDs.

This special player has racked up 3,517 yards and 64 touchdowns in his 30 game career. And if you perceive this lad a just a flashy runner with a multitude of moves that enables him to avoid the tough yards, you must not have seen Moses run.

At 190 pounds and rock solid, this dude will explode into the heart of a defensive line and bury a linebacker if one stands in the way of the goal line. Moses is a tough son-of-a-gun.

The Storm has drawn the #1 seed in Class B and will host #16 Omaha Gross in the 2nd game of a double-dip at Elkhorn Stadium. The 8:00 start will follow the Elkhorn and Norris opener.

*Tanner Lamoree-Cross County - All I can figure out is Lamoree likes to begin the season with a bang and go out with one as well. The senior RB exploded for 320 in the Cougar's opening season win at Lutheran High NE then apparently wanted to top that one in the curtain closer with Shelby/Rising City.

Cross County finishes the season with a fine 6-3 record and will be on the far south side of the Class C-2 playoff bracket, garnering a 15th seed and a trip to 2nd seeded (8-1) Valentine next Friday.

Nice transition from 8-Man football to the 11-Man game fellas.

*Simon Otte-York - Flyin' Simon made mincemeat of the Northwest defense with 255 yards on 33 carries and 6 trips to the Viking end zone. The injury stricken Dukes rose to the occasion to take down Northwest 42-28, and earn a 9th seed playoff seed.

Otte broke loose for scoring runs of 4, 50, 36, 14, 1, and 11 yards in that big win. The terrific two-way player really came up huge when QB Damon Kaliff went down in the Seward game a week ago as well.. But then again, that's just the way Simon Otte plays the game.

The big outburst by Otte sails the junior over the thousand yard rushing mark, putting him at an unofficial 1,107 yards heading into the playoffs.

Also, hats off to Quarterback Nick Westkamp, who has filled in capably since Kaliff went down and will lead York the rest of the journey through the playoffs.

The Dukes get a rematch with Aurora in that opening Class B playoff game.

*AJ Hubner-Creighton Prep - The State's 11-Man passing leader completed 11 of 15 throws for a workmanlike 172 yards and 2 touchdowns in Prep's 56-12 stomping of Lincoln NE.

The 6-1, 180 pound senior fireballer has now completed 58% of his passes for 2,247 yards, 31 TDs and only 7 INTS in 2016. Hubner has thrown for over 300 yards three times this fall, including a 441 yard night in a 38-37 loss to Omaha Burke. You also remember, good quarterbacks coming out of this Creighton Prep program are not all that surprising.

If I recall, North Dakota State has a pretty fair signal caller by the name of Easton Stick.

The 7-2 Junior Jays have been seeded number 6 in the Class A playoffs and will face 12th seed Norfolk (6-3) in the 1st round Friday.

*Finest Hampton-Papillion La Vista South - Holy cow, it's been nearly impossible to even think of slowing down this guy the past 3 games. Wow!

Finest raced for 233 yards on 33 carries on the Titans 42-7 over Omaha Central last week. That raises Hampton's season rushing total to 1,720 yards and 19 TDs with 771 yards coming the past three games.

Papio South closed the regular season by winning three in a row after losses to Millard West and Creighton Prep. And speaking of Millard West, the 6-3 Titans get a rematch with the Wildcats Friday at Buell in the first round of the Class A playoffs.

Millard West won the regular season game 31-3 back on September 23rd. Finest had 132 that night. Does anyone remember these two teams meeting in the Class A quarterfinals a year ago?

Papillion LV South will want to avenge that 35-0 loss.

*Trevor Luzum-Exeter-Milligan - Talk about carrying a team that lost nearly all their firepower from the 2015 championship team. That's what Luzum has had to do this fall and he put an exclamation point on that one last week when the Timberwolves blasted Mead 57-30.

Luzum has done it all this season for Exeter-Milligan. In addition to his rushing yardage, Luzum has made 64 tackles on defense, scored twice on punt returns and once on a kick return to pace his team..

They will hit the long road to face 7-1 Bloomfield and try to find a way to slow down the great Quentin Moles, who has rushed for 1,966 yards this year.

*Tanner Crosley-Crofton - 213 yards on 24 carries, and scoring runs of 8, 71 and 5 yards lifted the Warriors to a 41-3 victory over Lutheran High NE of Norfolk.

Crosley will now carry his 1,084 yards and 15 touchdowns into the Class C-2 playoffs, which commence Friday.

This kid really, really packs a punch when he explodes at the point of contact. Man, Crosley runs hard. This isn't Tanner's first 1000 yard rodeo either. Last season he ripped off 1,323 yards and 22 TDs while leading Crofton to a 7-3 record.

The Warriors host a banged up Central City team to open the playoffs. The 7th seeded and 7-2 Crofton is on the bottom half of the bracket opposite Valentine/Cross County.

Stuhr, who is the leading 8-Man football rushing in the nation, rolled for 272 yards on 34 totes. I was there and personally can tell you every single yard Austin gained was difficult. That Kenesaw defense brings the wood on every play.

One word about Heartland. If you think this is a one man football team, you'd better think again. This is one tight knit, hard hitting, skilled group of football players.

Lane Huebert can, and will throw when he needs to do so. The talented QB has completed 30 of 54 passes for 362 yards and 13 TDs. That is dangerously close to every other completion going for a score folks.

And we haven't even talked about players like Hayes Oswald, Ben Driewer, Ethan Hall and Aaron Buller yet.

Heartland has a good draw in the D-1 playoffs in 3-5 Nebraska Lutheran. The Huskies are in that East bracket as the #4 seed. I like this football team.

*Kale Kleinschmidt-BDS - Good Lord. That is about all I say about this young man. In a game I took in Thursday, Kleinschmidt ran for 126 yards on a grueling 37 carries in the Eagles district championship win over a fine Lawrence-Nelson team.

The All-State back scored on runs of 1 and 3 yards in the 36-0 win over the previously undefeated Raiders. That raises the all-around senior's rushing total to 806 yards. Seems low, but Kleinschmidt does so much more and just simply will find a way to beat you.

The defending Class D-1 Champions dropped down to D-2 this fall and will be one of the favorites to come away with the title after the smoke clears in November.

The undefeated Eagles are seeded #2 in the East bracket, on the opposite end of #1 seed Osceola (7-1), who is a powerhouse themselves.

BDS will begin their playoff journey Thursday with a home game with 15 seeded Allen (4-4) .

*Bryland Mennicucci-Yutan - Had a big game in Yutan's 41-3 win over Lincoln Lutheran. The 5-7, 145 pound junior scored on runs of 14 and 19 yards in the win, but also added 65 yard punt return for another touchdown. The big thing about the punt return?

Mennicucci set a Class C-2 State Record for Most Punt Returns in a season with that baby. That was Bryland's 6th punt return taken to the house in 2016. That's a bunch.

These Yutan Chieftains, who get in the C-2 playoffs as the #16 seed, are a very dangerous crew. They are 6-3, and their three losses?

Yutan will have a rematch with Centennial in the opening round of the C-2 playoffs. Lookout.