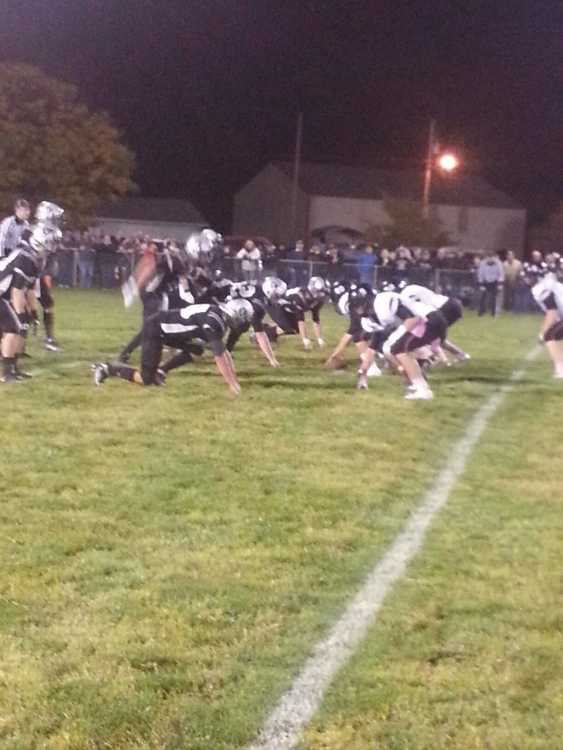 A week's worth of woodshedding on defense paid off huge dividends for BDS, as the Eagles completely shut down undefeated Lawrence-Nelson 36-0 in a classic matchup of Class D-2's top rated 8-Man football teams.

The #1 rated, and defending Class D-1 state champion Eagles put on a defensive clinic in front of a packed house in Lawrence Thursday night. BDS held the number 2 rated Raiders to 75 yards of total offense on a crisp, windless night and turned to All-State Kale Kleinschmidt to carry the load on the offensive side.

Carry the load, may be a gross understatement regarding Mr. Kleinschmidt, who had to be completely out of gas when the game ended.

The senior QB/DB, who has been a clutch player for BDS this season and all of last year, had a 2nd half running the football he will not soon forget.

BDS wasted no time going to work with their offense in the 1st quarter. After holding Lawrence-Nelson on their opening drive, that was their longest sustained drive of the night by the way, the Eagles promptly marched 56 yards on 7 plays to make it 8-0.

Kleinschmidt carried the ball 5 plays on the drive, but then found 6-2, 155 pound junior Garrett Schardt for a slick 31 yard touchdown pass. Kleinschmidt added the double PAT to stake BDS to the early 8-0 lead.

The Eagles were soon in business again when they picked off Raiders QB Corbin Biltoft.

Kleinschmidt again mixed the run and the pass perfectly, as the Eagles fashioned a 12 play 62 yard drive.

The 170 pound BDS quarterback nailed junior RB Thomas Mick for pass completions of 19 and 23 yards on the sustained drive, with Kleinschmidt taking it in from the 1 yard line for the score to finish it.

The real killer may have come however, when BDS took over on their own 35 with 2:08 left in the half, already leading 16-0.

Garrett Schardt took the ball on a reverse that Lawrence-Nelson had stopped in the BDS backfield. But Schardt quickly reversed his field, picked up some blockers, and dashed 25 yards down the L/N sideline to the the Raiders 20.

But a motion penalty, an incomplete pass, and a 12 yard Kleinschmidt sack by #52 Wyatt Heikkinen put the Eagles back on the Lawrence-Nelson 34 with only 4 seconds left until halftime. The Eagles then took a timeout and mapped out one final play before halftime.

Kale Kleinschmidt took the high snap, avoided the pass rush, then calmly fired a 34 yard touchdown pass to big 6-0, 210 pound sophomore Jon Christensen, who had turned his defender around in the process.

With Lawrence-Nelson still in the game, trailing only 22-0, you should have witnessed what transpired on Bruning-Davenport-Shickley's 2nd drive of the 3rd quarter. It was exhausting just to watch.

The entire scenario was set up following a 12 yard Kleinschmidt sack by Lawrence-Nelson's Anders Jensen at the Eagles 3 yard line. Kleinschmidt, forced to punt from the back of his own end zone, shanked it, sending the punt only to the BDS 27.

But the Eagles gained it right back 6 plays later when Garrett Schardt pirated a Biltoft pass, returning it to the BDS 15.

Now the Kale Kleinschmidt fun began. Kleinschmidt carried the ball 10 times on the ensuing 13 play drive, and had nothing to show for it when the Raiders sacked him on the Lawrence-Nelson 15 yard line.

The Raiders could not convert, but got off a terrific punt that sailed all the way to the Eagles 16.

With the clock reading 12:00 and the ball resting on the BDS 16 yard line, Kale Kleinschmidt actually looked stronger despite the 10 carries on the prior drive.

He then proceeded to every carry the football every single play of the Eagles 9 play, 64 yard scoring drive. Every single carry. Kleinschmidt, who had to be exhausted from the combined 19 carries during the previous drives, flew from the 3 yard line to make it a 30-0 lead with 8:08 left in the game. I wondered if he was going to get up.

Kleinschmidt was actually given a rest on the point after, as junior Caden Norder walked it in for the double PAT making it 30-0 with 8:08 left in the third. At that point the All-State quarterback looked completely spent.

BDS did score again following a fumble recovery after a center snap bounced off Corbin Biltoft's helmet and was gobbled up by a BDS defender at the L/N 15 yard line.

Co-Coaches Mark Rotter and Chris Ardissone mercifully kept Kleinschmidt on the sidelines, instead sending Caden Norder in to finish the job.

The 5-10, 210 pound junior pulled a "Kale Kleinschmidt", toting the ball 5 straight times, the last one being a 3 yard scoring run around his left side.

It was a dominating night on both sides of the ball for BDS in the 36-0 win over a great Lawrence-Nelson team. Kleinschmidt led the Eagles ground game with 126 yards on a grueling 37 carries, 19 coming on two drives in the second half.

The sharpshooter was also nearly perfect in the passing games, completing 7 of 8 throws for 137 yards and two scores. Thomas Mick caught 2 passes for 42 yards while Garrett Schardt latched on to three Kleinschmidt aerials for 40 yards and a TD.

The swarming, hard hitting BDS defense limited Lawrence-Nelson to a miniscule 62 rushing yards and 4 of 11 passing for 13 yards.

Meanwhile, BDS was racking up 323 yards off offense while the defense was gobbling up a fumble and pirating 2 Raiders passes.

And do not let this 36-0 setback fool you into thinking this Lawrence-Nelson is not a very good football team. Fundamentally sound in all phases of the game, Brian Blevins team will make some big noises in the upcoming Class D-2 playoffs.

Both teams now await the playoff seedings and will enjoy 1st round home games on Thursday, October 27th.