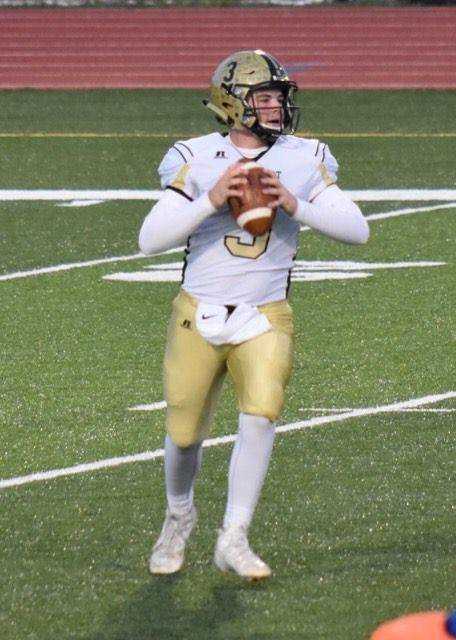 We are heading into the "crunch time" part of the regular season for many teams with playoff aspirations. It is certainly more critical in the 11-Man ranks, where the playoff fields were pared to 16 teams a few years back. Both 8-Man classes are still rolling with the 32 team format.

Things are most critical right now in Class B, where all district games are contested the final three weeks of the regular season. Lose two out of three of those babies and a playoff berth may be a very difficult ticket to punch.

Anyway, I present Part 1 of Friday Night Heroes. One of Three, as usual.

Carter Terry-Grand Island Northwest - Sophomore quarterback had his throwing arm lock and loaded Friday night at Seward. The Viking gunslinger came within 22 yards of breaking the Class B single game record for passing yards in the Northwest's victory over Seward.

Terry completed 25 of 40 passes for 406 yards and 4 touchdowns in the 38-17 win. One of Terry's completions was a state record tying 99 yard TD strike to Riley Schliep. Schleip also hauled in an 11 yard TD reception, while Jadyn Rodenbaugh latched onto a 34 yard TD pass from Terry. The other scoring toss was snagged by Preston Ellsworth and covered 23 yards.

The Vikings needed all of Carter's heroics in this game, trailing 10-0 after the 1st quarter and 17-7 at halftime. A 90 yard punt return by Tanner Lierman also helped fuel the Northwest rally.

After 7 games, the 5-11, 180 pound Carter Terry has completed 124 of his 228 passing attempts, good for 1,639 yards, 17 touchdowns and 7 interceptions. Terry also has the luxury of a terrific receiving corps with the likes of Schleip, Rodenbaugh, Lierman, and Brady Glause.

This receiving corps reminds me of that 2012 group of speed burners that went to Aurora and shocked the Huskies and the Class B world with their 54-0 rout. Remember Alex Larsen, Alec Waters etc. with Zach Rouzee at QB that year?

So, here is the scoop on Carter Terry. As a freshman, he had Christian Ellsworth in front of him on the depth chart. That limited his pass attempts to just 3 as a freshman, but he completed 2 of those for 18 yards. One of the two went for a touchdown.

And now.......what a difference a year makes. By the way, only Creighton Prep senior AJ Hubner has more passing yards than Carter Terry in the 11-Man football rankings. The Junior Jay sharpshooter has thrown to 1,724 yards this fall, 85 more than Terry.

*Lane McCallum-Norfolk - Set a modern day Class A record for most points scored in a football game with 44 in the Panthers 58-6 romp over visiting, and very tardy Omaha South team.

McCallum scored on runs of 4, 2, 38, and 2 yards, and caught scoring passes covering 5 and 14 yards from QB Tayen Meyer. McCallum also booted 8 PATS to reach his record of 44 total points scored.

McCallum ended the late night with 149 yards on 30 carries. The game did not get going until 8:45 due to Omaha South experiencing bus problems on the way. OR, maybe they arrived in Norfolk via the Sioux Falls, SD route.

*Treyson Bigler-Lincoln Christian - Junior QB had a night to remember last Friday. Not only did the 1-5 Crusaders thump a good Ashland-Greenwood team 43-14, but Bigler had himself a whale of game.

The junior set the tone by scoring from the one yard out on Christian's opening possession, then proceeded to complete and insane 22 of 29 passes for 339 yards and 2 touchdowns in the upset win over the Bluejays.

Bigler's favorite had to be Reid Houchin, who had 11 receptions for a whopping 180 yards. Alex Schriner had 9 receptions himself, for 134 yards and hit the end zone on two of those. One scoring catch covered 14 yards, the other being a 56 yarder.

Running back Joe Dworak did the ground damage with his 126 yards on 17 touches and a couple of 1 yard scoring blasts.

I couldn't locate Treyson Bigler's entire season passing stats, but I can tell you after three games he had completed 18 of 32 pass for 221 yards, a touchdown and seven interceptions. It appears to me Mr. Bigler may have just improved his accuracy by a ton.

*Trevor Nichelson-Ashland-Greenwood - And you thought Lincoln Christian maybe shut down Trevor Nichelson? No such chance. The virtually unstoppable senior still rambled for 172 yards on 29 carries and a touchdown despite his team losing 43-14.

Nichelson raised his season rushing total to 1,370 yards and his career rushing mark to 5,932 yards, placing him 9th on the All-Time Career rushing list.

Next in Trevor's sights is Jacob Morrill's (Creighton) career total of 5,981, Chad Koch's (Hartington CC) 6,017, and Mike Brower's (Fillmore Central) 6th place career mark of 6,099. Beat Ethan Skinner's (Hemingford) total of 6,139 yards and Nichelson gets himself a position in the Top 5.

*Diego Gutierrez-Ralston - Despite kicking field goals of 43, 32 and 21 yards, his Rams still ended up on the short end of a 21-16 score against Bennington.

This 5-11, 150 senior nails just about anything he puts his foot into. Gutierrez has made all 18 of his PAT kicks and nailed 9 of 11 field goals attempts this fall. Diego also booted 3 FGs a couple of weeks ago in a 23-22 loss to Columbus.

In his last 14 games, which includes last season, Diego Gutierrez has kicked 12 of 16 FGs and 34 of 36 PATS. Somebody at the next level may want to check this dude out.

In just three soccer seasons, this guy already has 77 goals and 34 assists.

*Tyler Kress, David Garcia-Grand Island - Quarterback/running back duo caused Lincoln Pius X all kinds of grief in the Islanders 35-20 win over the 'Bolts.

Kress connected on 12 of 18 passes for 209 yards and 4 TDs. The hard running 5-10, 180 pound Garcia gained 137 yards on only 14 carries and ripped off a spectacular 73 yard touchdown sprint, running over Pius tacklers at both 30 yard lines before scoring.

Kress, who has thrown for 1,111 yards this season, fired two scoring passes each to Payton Kinne and Will Nordhues. Kinne, who has 8 of the 11 TD passes Kress had thrown this season, grabbed TD receptions of 57 and 83 yards while Nordhues, the GICC transfer, had scoring catches of 14 and 74 yards.

David Garcia may be headed for a thousand yard rushing season, having already run for 683 yards. The Islanders have two regular season games remaining and should be a playoff team, which will aid those chances to reach the coveted 1000 yard mark.

*Jampe Gersen-Lincoln Southeast - 6-0, 175 pound sophomore quarterback did a very commendable job of filling in for the injured Jack Strong. All Gersen did was calm himself down after warmups and proceed to complete 10 of 13 passes for 258 yards and 2 TDs in the Knights 28-0 win over Bellevue East.

Jampe found all-state candidate Sterling Smith for a 60 yards TD pass in the 2nd quarter then hit Brian Meyer for a long distance 74 yards coring pass in the 3rd quarter.

Lincoln Southeast improves to a sparkling 6-1 record this season and appear headed for a District A 4 championship matchup in Grand Island on October 21st, the final game of the regular season.

*"The Drive" by Crofton - This baby will go down in Crofton's football history annals as one of the best ever. Maybe Thee best. Let me set the stage for this Class C-2 dandy.

Right smack dab at the 2:47 mark of the 3rd quarter, Cedar Catholic punter Matthew Schaeffer booms one, pinning Crofton on their own 1 yard line.

Crofton then embarks on 18 play, 9:10 second drive, culminating with an Ethan Poppe 2 yard TD run at the 5:37 mark of the 4th quarter.

Grant Wragge added the point and Crofton took a 28-20 lead with Cedar Catholic unable to answer.

Crofton did not throw one pass on "The Drive". Just for the record, Ethan Poppe, Noah McFarland, Tanner Crosley and Jaydn Janssen all carried the ball on the 99 yard drive with Poppe and Crosley doing a good part of the damage.

*Tanner Lamoree-Cross County - Exploded for 237 yards on just 19 carries and 6 touchdowns in the Cougars 70-19 drubbing of Fillmore Central.

Lamoree reached paydirt with runs of 28, 33, 40, 36, 7, and 34 yards as Cross County sprinted to a 55-12 halftime advantage. Lamoree has an unofficial season rushing total of 913 yards after missing some earlier playing time with an injury.

*Nick Boyd-Raymond Central - Let me tell you something, there must have been something bewitching in the Eastern Nebraska night air last Friday. I just told about Lincoln Christian's Treyson Bigler exploding against Ashland-Greenwood but you haven't heard anything yet.

Check this out. Raymond Central began the season 0-4, but rebounded to win their last 3 games, nearly evening their record. Nick Boyd, who missed the Syracuse game in week 4, had only completed 21 of 54 passes (39%) for 303 yards, 3 TDs and FIVE interceptions.

Enter last Friday evening against Milford-Dorchester. Raymond Central trailed the Eagles 31-7 at the halftime break before rebounding with 19 fourth quarter points to beat Milford-Dorchester. Boyd comes up huge for Raymond, throwing for 316 yards, 13 more than he has thrown for in his last 5 games combined.

I give up on finding an explanation for this one. Anyway, hats off to Nick Boyd and his Mustangs. They are 3-4 right now, but all three of their wins have been in District play.

*Will Wagner-Central City - This quarterback doesn't need anything weird in the air to have a great game. Wagner was lethal against the mighty Sutton Mustangs, shredding their pass defense for 227 yards and 2 TDs in a 35-0 win.

Of course then you have Division 1 prospect Jordan Paup, who already has 10 sacks, 25 tackles for losses. Paup has also dished out a gazillion Excedrin headaches to everyone he comes into contact with playing on the other side of Central City's defense.

This is absolutely my favorite defensive player in the entire state of Nebraska. Just the thought of putting on the pads gets this guy wound up. You just do not see high school football player that have the kind of passion for the game that Jordan Paup has.

*Fremont Bergan Defense - Held Tekamah-Herman to just 103 yards of total offense in the Knights 49-0 win over the Tigers. Nick Berger intercepted a 1st quarter pass which led to his own 42 yard TD pass to Hunter Logemann.

Later in the quarter, Dylan Kucera recovered a fumble, which led to another Nick Berger TD pass, this time a 23 yarder to Colby Boggs.

Bergan's lead swelled to 21-0 when Ethan Villwok blocked a punt. That led to yet another Berger to Boggs scoring pass, this one covering 21 yards.

Villwok then recovered an errant Tekamah-Herman pitch, which eventually led to a 3 yard TD run by Logan Brandt. Hold on Bubba, I'm not finished yet.

Murphy's Law, or Bergan's Law I should say, was there to bite the Tiger's tail again before it was over.

Logan Brandt blocked another punt in the 4th quarter, which led to a 2 yard scoring run by sophomore Nick Henrink. The pain finally for T/H when freshman QB Jake Ridder hit the end zone from 4 yards away with 7:52 left in the game.

*Drew Bessey-Palmyra - 6-0, 175 pound junior WR caught 3 touchdown passes and threw for another in the Panthers 44-6 win over Johnson County Central.