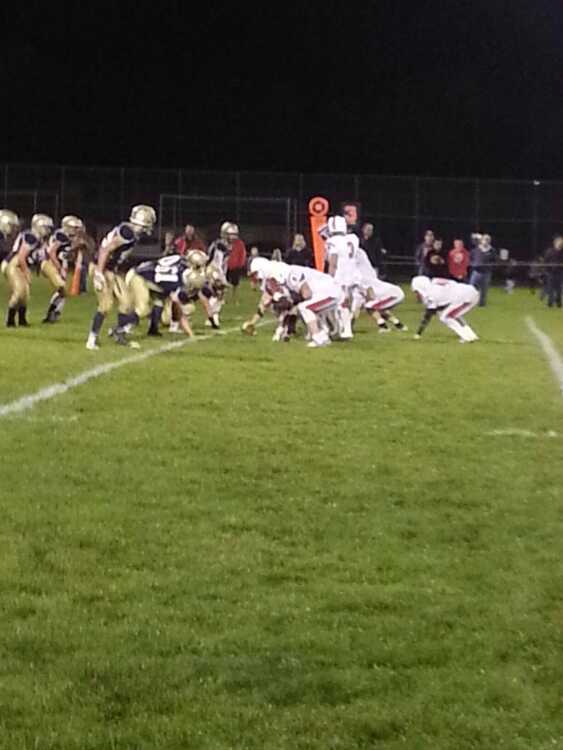 A double extra point pass to a player that hadn't logged one minute of varsity football this season was the difference in this great rivalry game matchup between two Class B rated teams.

Aurora quarterback Carter Thompson raised up and hit 195 pound junior Ian Boerkircher for a 2 point conversion following an 8 yard touchdown toss from Thompson to Jerad Snyder. That proved to be the difference as Class B's 8th rated Aurora knocked off No. 4 York, 15-14 at East Hills Park in York

The double extra point pass happened in such a rush, York hardly had time to get set, allowing the rookie Boerkircher to slip to the back of the end zone and make the grab.

Most of the scoring came in the first half of this brutal hitting rivalry matchup. After York's opening drive fizzled at the Aurora 26, the Huskies promptly took their initial drive of the game 74 yards down the East Hills park grass field to score.

Thompson hit Kubik for a 15 yard strike that carried from the York 21 to their 6 yard line. Two plays later the slick running Dibbern slipped in for the 6 yard TD run with 4:02 left in that opening quarter.

It took less than 3 minutes for Dukes quarterback Damon Kaliff to move his team 62 yards downfield to score.

A 23 yard toss for Kaliff to outstanding sophomore Garrett Snodgrass set up a 3 yard TD run by patient running Simon Otte. Jorre Luther sailed the PAT kicked through the uprights and over the fence to tie things up a 7 apiece with 1:25 remaining in the 1st.

Late in the second quarter, Otte took a pitch from Kaliff and skirted around his left end, dancing down the Aurora sideline for a sizzling 47 yard scoring sprint. It didn't appear that the speedy senior would break clear, but Otte kicked in the jets and took it to the house.

Luther booted the PAT and York took a 14-7 lead into the halftime break. It was a costly first half of football for the Dukes though. York's own all-state candidate Alex Kowalski, a fantastic two-way performer, exited the contest with a foot injury in that 2nd period and never returned to the field, coming out after the half on crutches.

Aurora's winning drive came in the 3rd quarter and ironically followed a streak on 8 straight incomplete passes, one of which was an interception, by QB Carter Thompson. But on this possession, the 155 pound senior signal caller spotted his multi-talented classmate Preston Dibbern for a big 35 yard gain, advancing all the way from the Huskie 45 to the York 20.

The York defense stiffened, forcing Aurora into a 4th and inches play on the Dukes 11 yard line, but Thompson followed his O-Line surge to get the 1st down. Two plays later, Thompson connected with Jerad Snyder for the first time all season, for that 8 yard TD.

The "in the blink of an eye" 2 point conversion pass to Boerkircher followed, and the Huskies had a 15-14 lead that they never relinquished.

The Dukes had a couple of chances in the 4th quarter, but could not convert. One was a golden opportunity when Garrett Snodgrass recovered a Preston Dibbern fumble at the Aurora 35. But the very next play, the opportunistic Huskie defense ripped the ball away from Simon Otte after a short gain to immediately snuff out that York opportunity.

York's offense outgained Aurora by a hundred yards, despite losing Kowalski, but still ended up on the short end of the score.

The Dukes Simon Otte led all rushers in the game with 129 yards on 22 carries and a touchdown. Damon Kaliff completed 13 of 23 passes for 201 yards, suffering one interception. Kaliff's favorite was Otte, who hauled in three passes for 90 yards, including a sweet 61 yard reception.

Aurora's 1000 yard man Preston Dibbern was held to 82 yards on 23 grueling carries, but the senior was so effective out of the backfield as a receiver. The elusive, shifty Dibbern had 5 receptions for 65 yards, some of which kept drives alive.

Aurora improves to 5-2 for the season and 1-0 in District play. The Huskies will return home to face bitter rival GI Northwest next Friday before closing at Seward on October 21st.

Meanwhile, the Dukes, who drop to 5-2, (0-1 in District action) and stay at home to face Seward next Friday before closing out the regular season at GINW on October 21st.