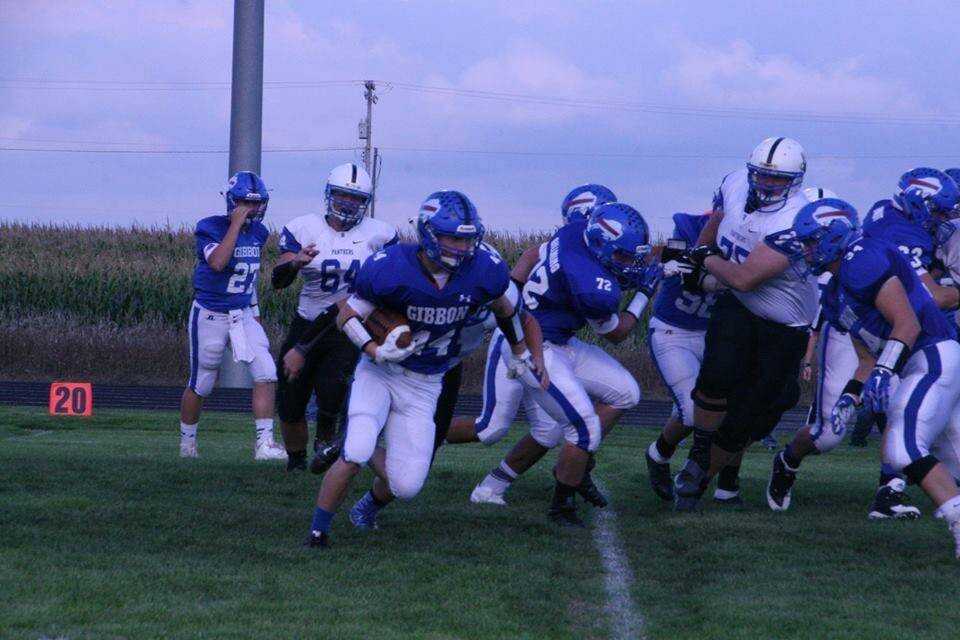 *Jacob Tracy-Gibbon - Broke Gibbon's single game rushing record with his 381 yards on 17 carries effort against Sandy Creek last Friday. Tracy jetted for 5 touchdowns in the Buffaloes 55-14 rout over the Cougars, averaging an unimaginable 22.4 yards a carry.

I hate to boast because hindsight is 20/20, but I could have predicted this was coming after watching Tracy play as a sophomore. What makes this even more incredible is the fact this record comes on the heels of heavy graduation losses for Gibbon coming into 2016.

This win was the first of the year for Mark McLaughlin's forces, but this certainly isn't Jacob Tracy's first rodeo. Last season as a sophomore, Tracy ran for 523 yards, made 68 tackles, and recovered 2 fumbles. Most of those yards came in a backup role to 1000 yard rusher Tanner Gideon.

As a freshman, Tracy rushed for 311 yards and made 19 tackles for a team loaded with upperclassmen talent.

The young man is a pure football player through and through and with Coach McLaughlin at the controls, a future All-State selection.

*Noah Mick, Cade Elwood and the Millard North "O"-Line - Shredded Kearney's defense to the tune of 391 yards rushing in the Mustang's 27-13 win over the Bearcats.

The superior Mustang offensive line of Center Cody Ritterbusch, guards Mason Bogacz and Cole Story and tackles Justin Pederson and Dylan Dittman did the plowing while Mick and Elwood hit the holes, then crashed for many yards after contact.

Defensive Coach Mark Chavez and his family of stoppers/defenders were equally impressive in the domination, limiting Kearney to less than 120 yards of total offense.

Zabel by the way, raised his 6 game rushing total to 794 yards. Schultz, who has 5 consecutive 100 yard rushing games, is not far behind with 675 yards for the season.

The poised sophomore completed 18 of 29 passes for 250 yards and 4 TDs to rally the Vikings from a 21 point deficit. Terry first found Coleman Cooper for a 4 yard TD strike with 2:38 left in the game. The Vikings then took over with a minute later on their own 38 and needed only four plays for Terry to hit Tanner Lierman with a game winning 12 yard TD pass.

Carter Terry, who threw only 3 passes in 2015 in a backup role to Christian Ellsworth, has already thrown for 1,233 yards and 13 TDs in 6 games for 4-2 Northwest this season. The sophomore has hit 53% of his 188 passes for the year and has a promising future for the Vikings, who seem to produce top notch quarterbacks.

*Quinten Moles-Bloomfield - Punished North Central by running for 292 yards on 23 totes and 5 TDs in the Bees 68-14 win last Thursday.

Moles, whose lowest rushing output of the season is 164 yards, also recorded 8 tackles on defense for the 4-1 Bees. The huge night ups Moles' season rushing total to 1,207 yards and 18 touchdowns (10.5/carry)

Chohon's yards were just a third of the Shamrock's 495 rushing yards for the night. Anthony Kosch added 95 yards on just 3 touches (87 TD run) while Matt Strecker ran 5 times for 87 yards in the romp.

*Jaden Johnson-Columbus Lakeview - Despite the 53-28 thumping by Scotus, Johnson managed to complete 7 of 14 passes for 218 yards. He also added 38 yards rushing and 2 touchdowns in the loss. Teammate Nick Dolezal caught 5 of Johnson's throw's, good for 124 yards.

*Kipp Hergenrader-Lincoln Southeast - 5-10, 175 pound senior ran 24 times for 166 yards in the Knights huge 38-19 win over Lincoln Pius X. The hard running senior scored on short blasts of 2 and 4 yards in the District 4 win.

Hergenrader is already up to an unofficial 604 yards on the ground after 6 games for the Southeast, who is currently 3-1 in District 4 play and 5-1 overall. Quite a nice turnaround for Ryan Gottula's Knights after a 2-7 season ago.

Reed, who is the leading 6-Man rusher in the nation, increased his season total to 1,318 yards with 25 touchdowns for 3-3 Hay Springs. The oustanding Reed was an All-Panhandle 8-Man football selection as a freshman a year ago.

*Keenan Stupka-Anselmo-Merna - Senior RB put in game into overdrive, tearing up Brady's defense for 319 yards on 19 carries (16.8 yards a pop) and 5 TDs. The Coyotes used a super-charged rushing attack to beat Brady 78-40.

Stupka's huge night swelled his six game total to 843 for the 3-3 Coyotes.

*Matt Neiman-Brady - Despite the lopsided loss to Anselmo-Merna, the 5-11, 185 pound bulldozer still rambled for 202 yards on 33 carries for the Eagles, scoring 2 TDs in the process.

Neiman, who rushed for 1,446 yards and 29 TDs and year ago, increased his 2016 ground total to 801 yards with a whole lot less blocking than he had a year ago when Brady was a 6-3 football team.

*Hunter Reimers-Palmer - Had his usual monster game on defense, recording 24 tackles in Palmer's 36-14 win over a tough Nebraska Christian team.

The talented senior also snared 8 passes from QB Caden Reimers for 129 yards and a TD for the 6-0 Tigers, who have risen to the occasion every single game this fall.

*Easton Clark-Hershey - Did his part and more in Hershey's heartbreaking 10-7 loss to Valentine. Clark rushed for 174 yards on a grueling 34 carries, scored a touchdown and picked off a Valentine pass before it was final.

The 5-11, 190 pound junior, who ran for 807 yards last season, is part of a talented returning class for Coach Ryan Smith's Panthers.

Hershey is currently 5-1, and 1-1 in Class C-2 District 8 action, with critical home game coming up with rival North Platte St. Pats and Bridgeport.

*Jack Rush-South Loup - Nothing like a quarterback that towers over both the offensive and defensive lines.

The 6-4, 170 pound junior QB put that to good use in the Bobcats 57-14 trouncing of Ravenna last Friday. Rush was madly efficient in both the rushing and passing game against the Bluejays.

The junior captain was 5 for 9 passing for 156 yards and three TDs. He also rushed only 8 times, but gained 63 yards and added another score. He also defended 2 passes, recovered a fumble and blocked a punt. Of course he did. Bob Jensen told me this dude would be good.

Only Hemingford (35-30) has come close to this 5-0 South Loup team (Callaway/Arnold) in 2016. I saw this coming a year ago when I saw Coach Andy Schwarz and the boys play at Central Valley on a gorgeous October afternoon in Wolbach.