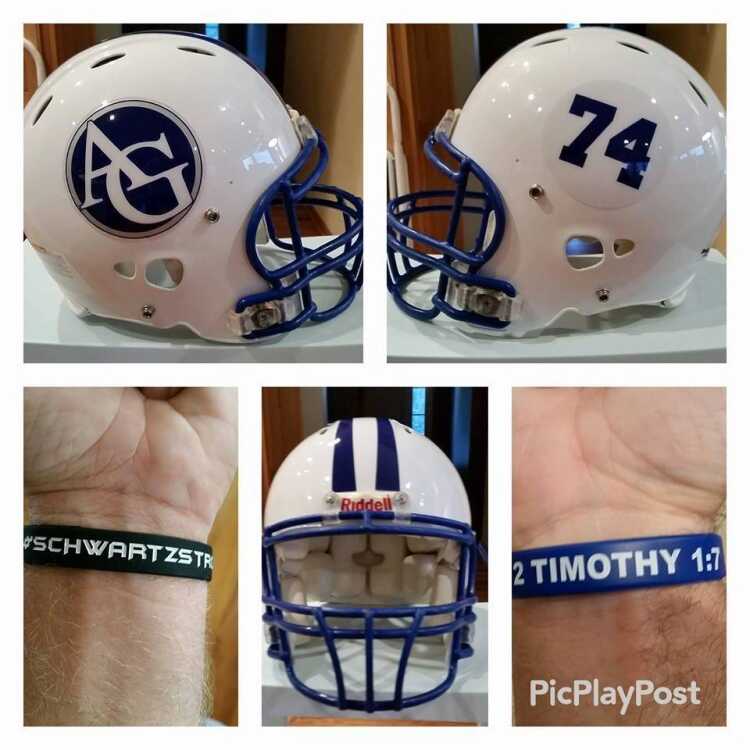 And, last but not least, we give a round of applause to these gentlemen who had themselves a heck of a game last Friday, plus a special opening deep bow to a great man.

*Coach Reed Schwartz Tribute-Jug Brown Stadium-Falls City - The Sam Foltz Tribute at Memorial Stadium was awesome, but the night before, both the Falls City Tigers and Ashland-Greenwood Bluejay football teams combined forces to honor A/G's beloved coach, who lost his 16 year fight with cancer this summer.

Coach Schwartz, who grew up in Falls City and played football there, was loved to pieces by both communities and to see this combined effort, reminded us all what Nebraska High School Football is all about.

The Ashland-Greenwood players had his #74 on their helmets and I was so heartstruck when I saw 10/11 Strong's film piece on that tribute. Great job Kevin!

It was so powerful to see A/G head coach Ryan Thompson keep things together when speaking of Coach Schwartz, but to witness players Brett Kitrell and Trevor Nichelson hold it together like grown men when being asked about their beloved coach, told us all something.

And the gathering at midfield to release A/G's blue and white balloons and the Reed's Tiger Orange and black ones was stirring.

*Trevor Nichelson-Ashland-Greenwood - After being held in check a week ago, Nichelson was off and running in the Bluejay's 48-34 win at Falls City. The senior phenom carried 21 times for 283 yards and scored on runs covering 39, 45, 5, 93 and 17 yards in the win.

Nichelson completed 1 of 2 passes just for kicks and was in on 14 tackles on defense before it was all over with.

The oustanding back will have to wait a week to attempt a vault over that coveted 5,000 yard career rushing mark because Ashland-Greenwood has a rare bye week this time around.

Want an unreal stat? Nichelson has averaged 7.4 per carry every single time he has touched the football on a rushing attempt......663 times. Find me a better stat.

*Trey Stutheit-Johnson-Brock - This 6-3, 180 senior quarterback is one outstanding athlete, I tell you. How can you fly under the radar with totals like this.

In J/B's 50-18 win over Nebraska Lutheran (Waco), Stutheit threw 19 passes, completed 15 of those for 283 yards and 4 TDs. He also rushed for 45 yards and scored two more TDs in the romp. He also added 10 tackles on defense and averaged 41.3 yards on three punts. No he didn't drive the bus home or launder the uniforms after the game.

Thus far this season, Stutheit has completed 21 of 36 throws for 428 yards, seven touchdowns with no interceptions.

Stutheit had some nice players to target in that win too. Jaxon Balm hauled in 5 passes for 72 yards and score, while Wyatt Nickels had 3 receptions for 128 yards and 2 TDs.

Trey Stutheit is no fluke friends. Last season as a junior, Stutheit was on target to the tune of 68% of his 162 tosses, good for 1,202 yards and 14 TDs for the 5-4 Eagles. He also ran for an additional 589 yards and 11 TDs, made 85 tackles on defense, intercepted 4 passes and recovered a fumble.

Oh yes, Trey also brought back fumble and an interception for a score in 2015.

It's a shame you never hear much about Johnson-Brock and I think it's because they're always tangling with Sacred Heart, Lourdes CC, Exeter-Milligan and now this season, Tri- County.

*Tyler Pecena-Wayne - How about this guy! In last week's 42-37 loss to Boone Central/NG, the 5-10, 170 pound senior ran for 245 yards on 22 carries, hit paydirt on a 42 yard run and caught a 13 yard pass for another. Tyler also made 11 tackles, picked off a Dylan Gentrup pass and pounced on a Cardinal fumble.

That's not the first time the power running Pecena has posted big numbers. In the opening game loss to Scotus, Tyler carried 15 times for 158 yards and scored 3 times as the Blue Devils put the Shamrocks on the ropes for a while.

Pecena in on track to gain a thousand yards this season, already rushing for 403 big ones. Why is this special?

Only 3 players in Wayne Blue Devil football history have ever cracked the 1000 yard mark.

Can one assume Wayne has favored the aerial game all these years? At any rate, this Tyler Pecena is top notch. Trust me, I've seen lots of film on this dude. The Real Deal.

*Milton Sargbah-Omaha North - Ran through Omaha Central for 185 yards on 25 carries and scored TDs on runs of 12 and 35 yards in the Vikings 30-0 conquest of the Eagles.

You should watch this kid play. Opposing coaches just hold their breath every time Milton gets the handoff or pitch. So much fun to see his talents on display, and that Omaha North Offensive Line.............Holy pancakes.

*Noah Vedral-Wahoo Neumann - Passed for 185 yards and 3 touchdowns in the Cavaliers 34-14 win over #2 Scotus. Noah also rushed for 49 yards and made 5 tackles in the game. And, the victory solidified Neumann's number ranking in C-1 into the road game at Syracuse this Friday.

If you want to see poetry in motion, watch Noah Vedral in warmups. I haven't seen too many high school quarterbacks throw a tighter spiral than does this young man. Just pure mastery. You know what's coming next too, right?

Noah could fire a pass through a carwash and not get the ball wet. True, as unlikely as it may seem.

*Tivon Phillips-Lincoln Northeast - The Rockets leaned on Phillips and he responded by carrying 36 times for 186 yards and 2 TDs in the loss to Lincoln North Star.

Phillips runs shorties of 4 and 3 yards, but the Rockets came up on the short end of the 34-24 score. However, Phillips elevated his 2 game rushing total to an unofficial 325 yards 4 TDs.

The Rockets have a good shot at cracking the win column this week when they travel to Omaha Benson.

*Ethan Cox- Blair - Well, best of luck stopping Cox on the ground or through the air.

So, did you catch the Blair/Elkhorn score last Friday? Elkhorn edged the Bears 49-42 so I knew what was coming on the stat sheet.

The senior QB cocked the rifle arm and launched 39 passes into that Elkhorn sky, completing 28 of them for 373 yards and 3 TDs. That is 72% folks. Cox also ran the ball 18 times for 84 yards and 3 more touchdowns.

By my calculations, that is a hand in 6 of 7 touchdowns Blair put on the board. Can you say Team Leader?

So, in two games Ethan Cox has tallied a staggering 748 yards of total offense. Nobody is close.

*Joseph Krause-Seward - Not far off Ethan Cox's 492 passing yards is this sophomore gunslinger from the land of fireworks. No need to ignite any when Krause is around. He be Da Man that supplies the fireworks when Seward takes the field.

In that 28-25 loss last Friday to a very good Waverly team, Joseph completed 14 of 22 passed for 193 yards and 2 scores. Krause also does the punting and is averaging nearly 40 yards a boot.

So.....after 2 games, the sophomore QB has registered 448 aerial yards and passed for 4 TDs with only one pick. 27 of 44 passing for a sizzling 61% completion rate isn't bad either. What a future for Mr. Krause.

*Evan Johnson-Adams Central - Friday past must have been Youth Quarterback Night around Nebraska because here is another young'un that lit the up the Friday Night skies.

The freshman signal caller must be settling in, and after all he should be....he can't even legally drive yet and he's had all of 2 games experience in his varsity career.

Each of Evan's 6 passes averaged 25 yards, and half of them went for touchdowns. And I'll just bet Coach Shawn Mulligan would take those averages any Friday of the fall.

*Dylan Gentrup-Boone Central/Newman Grove - Up north on that beautiful field with the gigantic Cardinal in the middle, I can just hear Gentrup saying "I can top that one Evan Johnson."

Mark Hudson's boys needed all of Gentrup's yardage output to turn back those formidable Wayne Blue Devils, 41-37. Gentrup rushed 31 times for 206 yards (3 TDs) and was good on 5 of 7 passes for another 118 yards and 1 score in the win. That's 324 yards of total offense.

In two games, the 185 pound junior QB has accounted for 595 yards of total offense and rushed/thrown for over a hundred yards each game. Good bloodlines here, man.

*Levi Krueger-Boone Central/Newman Grove - You didn't think Dylan could do it all himself, did you? Naaaah.

Those kids up in Albion, Petersburg and Newman Grove are tough, man. Heck, they've been known to climb up to the propeller of one of those wind turbines, hop on the wings and go around a couple of rotations just for kicks before dropping to the ground.

Oh, we're not finished yet, this is 6-Man football, ya know.

Reed also caught 5 passes for 112 yards and a TD, had 6 tackles on defense and had 32 yards in punt returns and another 32 on kick returns. And of course, he had to go back to the ranch and do chores after the game.

*Chance Engle-Stuart - Another sophomore! In the Broncos 46-26 win over Central Valley (Greeley/Wolbach/North Loup/Scotia), Engle toted the ball 17 times for 198 yards and scored 2 touchdowns.

Engle must always be around the ball carrier when he plays defense, because he logged 20 tackle assists in last Friday's contest. This kid is no fluke either, having rushed for over a 100 yards on three separate occasions as freshman a year ago.

*Will Huffman-Maxwell - McCormick's junior counterpart rushed for 147 yards on 26 carries and scored 3 touchdowns in Maxwell's triumph over Garden County.

*AJ Jenkins-Wilcox-Hildreth - Despite Wilcox-Hildreth being creamed by unstoppable Riverside 67-6, the 1000 yard rusher still managed 137 big ones on 16 carries and the Falcons only score.

The 175 pound sophomore has the rare opportunity to become a 4 time 1000 yard rusher if he can stay healthy. Only FOUR others have ever turned the trick in the entire history of Nebraska high school football.

Friday, I can't miss O'Neill's visit to Boone Central/NG and a chance to see my friend Cory Worrell.

And a rare Saturday night treat when powerful Aquinas pays a visit to Memorial Stadium to play GICC. It will give me a chance to introduce my beautiful one year old granddaughter Arianna to Aquinas coaches Ron Mimick and Tony Smith.

If Ari hangs out on that Monarch sideline for any length of time, she will see how high school football should be played.