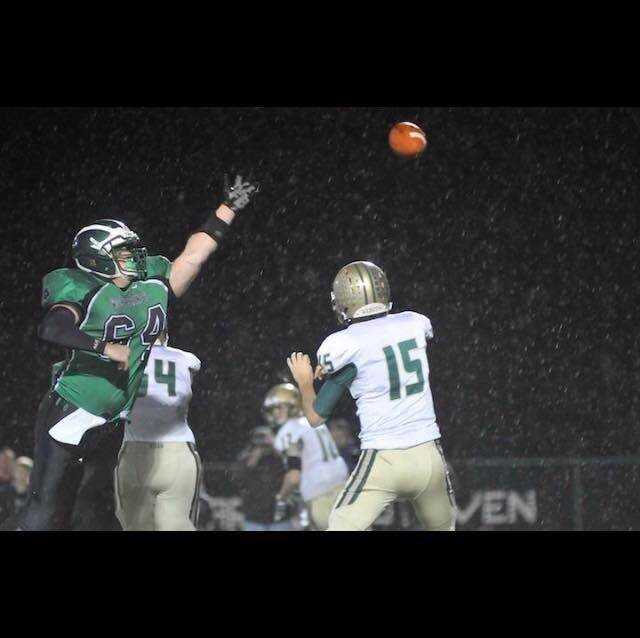 In Part One of of our Friday Night Heroes we spoke of the offensive explosions that occurred last Friday, but there were also some superb defensive gems turned in that were absolutely in the "total team defense" category.

So let us get things going with a dual salute to a pair of composite efforts. Just remember one thing as we move forward.

Defense wins games. And in common layman's terms, "they can't beat 'cha if they can't score on ya".

Wilber-Clatonia Defense - When the #2 Wolverines took on #1 Hastings St. Cecilia Friday, the unthinkable happened to the Bluehawks.

This stout defense of Wilber-Clatonia held the vaunted St. Cecilia rushing attack to a minus 25 yards and 67 yards of total offense in a totally dominating 42-0 whitewash of the Bluehawks. It is only fitting that we shout out the names of the defenders that put the halts to St. C's last Friday.

All totaled, the Wolverines registered 8 tackles for losses, had 3 sacks (Homolka with 2), Broz picked off a pass and Nathan Thompson (6-0, 225, Sr.) blocked a field goal attempt.

This defense is so formidable that there are players waiting in the wings to make tackles, as witnessed in Wilber-Clatonia's season opening 59-0 blowout of Sandy Creek.

Remember, this Wolverine team was a C-1 semifinalist last season with 5 starters returning on offense and 7 on the defensive side.

*Aquinas Monarch Defense - After blasting Raymond Central 48-0 to open the season, Ron Mimick's forces laid into a good Pierce team last Friday to the tune of a 47-14 victory. The lopsided win moved the Monarchs to 2-0 in the young season.

Although it's always a team effort at Aquinas, I would still like to mention a few names that anchor that Monarch "D".

And you just cannot give credit to the defense without giving some love to that Aquinas "O-Line". Svoboda, Urmacher, Ruth, Zach Chromy (5-11, 210, Soph) and Anthony Buresh (6-2, 190, Jr.) I believe make up the interior of that line.

One of the bookends is Reiter and I think maybe 5-10, 170 pound junior Sam Wisnieski may get some plays in that offensive line.

*Brayden Olson-St. Edward - Well, it appears that Mr. Olson had some real kicks in the Beavers opening 59-30 win at Harvard.

Olson, an All-Stater who ran for 1,403 yards a year ago, gained exactly one quarter of that 2015 total by rushing for 358 yards on 24 carries in that win. Olson not only scored 6 touchdowns in the win but also added 10 tackles on defense.

Another All-State player, Keenan Rasmussen aided the cause by bolting for 180 yards on just 9 touches, a part of St. Ed's 553 rushing yards against the Cardinals.

Rasmussen led the defense with 14 stops, while Evan Roberts chipped in with 12 crunches.

*Dylan Kautz-Norfolk Catholic - Sophomore speed demon needed only 10 carries to rush for 149 yards and 3 scores in the Knights 49-22 win over an improved Columbus Lakeview squad.

In the Broncos 30-6 stunner over Sandhills-Thedford, the sophomore RB ran for 187 yards on 36 totes and scored 3 TDs. Edis also made 6 tackles on defense and grabbed a 34 yard scoring pass in the win.

*Chris Stutzman-McCool Junction - After carrying the ball 10 times for a meager 2 yards a week ago in a 66-12 loss to Diller-Odell, Stutzman must have decided to take it out on Meridian.

The 155 pound back exploded for 375 yards on 34 carries and 8 touchdowns as the Mustangs crushed Meridian 60-26. Stutzman also made 15 tackles on defense and recovered a fumble.

*Garrett Snodgrass and the York "D" - Sophomore not only blocked a punt but recovered one of the Dukes 3 fumbles during the opening 5 minutes of the game at Lexington.

York went on to pitch a 35-0 shutout at the Minutemen. On offense, 201 pound senior Garrett Rediger was also a monster, clearing the running paths for QB Damon Kaliff and RB Simon Otte.

Reimers also had his usual monster night on defense, making 22 stops for Palmer, who is now 2-0 and looking forward to a banner season for terrific Head Coach for Nathan Glause.

Let me tell you something, these current seniors have waited 4 years for this opportunity to shine and they have the horses to do just that.

*Trenton Harbour-Stapleton - 214 yards and a TD on 28 carries in a 52-20 loss to Ansley/Litchfield for the Big Guy. In a rare win a week ago for Stapleton, the 195 pound Sherman tank blasted for 249 yards on just 13 carries in the Broncos 58-30 win over Hitchcock County.

Folks, Trenton Harbour is one big son-of-a-gun who is a load to bring down. Stapleton, who only suits up 13 players when everyone is healthy, had 538 points scored on 'em a year ago. Every single game was a blowout, yet Harbour still managed to rush for 749 yards and 9 TDs.

You just have to be a big, indestructible dude to pull that one off.

*Quentin Moles-Bloomfield - The 5-11, 180 junior carried the ball only 8 times in the Bees 62-20 win over Scribner-Snyder, but gained 164 yards and crossed the goal line 3 times. Moles also had 3 halts on defense.

Don't think Quentin can't carry the rock a bunch in a game though. In last week's 36-22 loss to Wynot, Moles toted the ball 42 times for 248 yards and a score.

You know, that's how they do things in Bloomfield, a school that has produced more 1000 yard rushers than almost any other school in the state. Oh, by the way Moles 2 game rushing total is 412 yards.

*Cody Thompson-Omaha Concordia - The 5-10, 170 pound senior needed only 10 carries to run for 173 yards and 2 TDs in the Mustangs 49-0 whitewashing of Conestoga. Concordia, who is still looking for their 1st winning season in their young school history, has a good start in 2016, sitting at 2-0 thus far.

The hard running Thompson, who has 304 yards in those 2 outings, will help this bunch work toward that goal while playing in the wars of Class C-1.

You just have to root for these D-1, 8-Man Lions. Last season's 3-5 record was a successful year for the school that has gone only 5-27 in the 8-Man ranks dating back to 2011. Prior to that the Lions had back to back winless seasons toiling in 11-Man Class C-2 and continuously being short handed and beaten up.

That dreaded losing streak reached 30 games at one point and at that time I'm thinking the Morrill faithful were wishing it was 2005 when the Lions had their only playoff team, going 8-2.