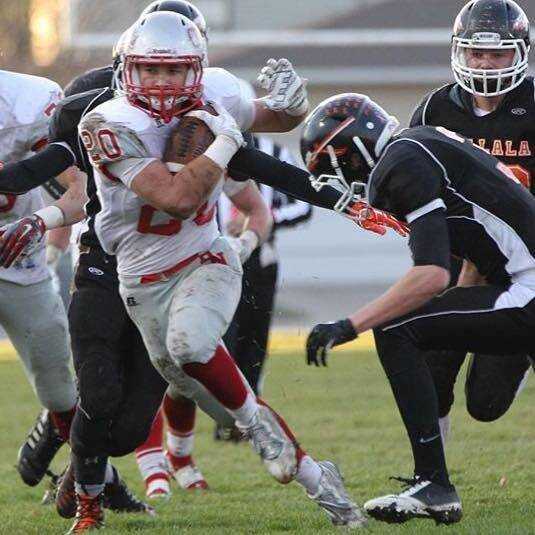 Class C-1 top rated Wahoo Neumann used 7 and a half minute span in the second quarter to score 21 points enroute to a 34-14 win over #2 rated Columbus Scotus at Pawnee Park in Columbus Friday night.

Central Florida recruit Noah Vedral fired a couple of 2nd quarter touchdown strikes, then added a third passing score in the 3rd quarter to propel Neumann to the road win.

Vedral found RB Trevin Rezac for an 11 yard scoring strike on the Cavs 1st possession of the that 2nd stanza, then hooked up with the 188 pound senior again to open the final quarter on a 10 yard TD pass.

In between touchdown receptions, the deceptive, hard running Rezac would add two rushing TDs to nail down player-of-the game honors with 4 TDs on the night.

Defending C-1 state champion Scotus, who had been hit hard with graduating seniors, actually had a chance to take the lead in the opening quarter after freshman Eric Mustard pounced on a Neumann fumble.

The Shamrocks would drive to the Neumann 24 before Cavs forced a 4th and 4 situation. A 41 yard field goal attempt by Evan Chohon sailed just right of the crossbar to end the scoring opportunity.

Defenses ruled that 1st quarter that ended in a scoreless deadlock.

On the ensuing Scotus possession, sophomore Eli Vedral picked off freshman quarterback Tyler Palmer's aerial at the Shamrock 42 to set up the 3rd touchdown of the quarter.

Following the interception by his younger bro, Vedral then broke loose on a 22 yard run, Trevin Rezac ran for 9 more, then went in for the touchdown standing up from the 2 yard line. Sophomore Thomas Benes (pronounced Benish) added his 3rd PAT boot of the quarter and the #1 Cavaliers had a 21-0 halftime advantage.

Neumann would add another touchdown with 2:30 left in the 3rd quarter on a strange play. RB Trevin bolted through the Scotus defense for an apparent 18 yard TD scamper, but was stripped of the ball at the goal line.

The ball popped straight up in the air but Rezac, who was already on the ground, immediately got up and magically recovered his own fumble in the end zone for a Neumann touchdown.

Rezac then added the 4th quarter TD reception from Vedral to make it 34-0 after Scotus senior Mitchell Halligan burst through to block Bene's PAT kick attempt.

The Shamrocks hit the board for the first time in the contest with 8:22 left in the game following some tough running by Evan Chohon.

Freshman QB Tyler Palmer lofted a beauty of a throw to Luke Jarecke, who out leaped Neumann's Ryan Dailey then continued on a 45 yard TD journey.

With just 1:27 left in the contest, Palmer hooked up with Evan Chohon for a 17 yard scoring pass against the Neumann subs to make the final count 34-14.

Unofficially, Noah Vedral was 11 of 27 passing for 187 yards and 3 touchdowns and also added 69 yards on 11 totes. Vedral's passing stats, by the way, are a little misleading because of good coverage by Scotus defenders, forcing the senior All-State candidate to purposely overthrow his receivers. Thomas Lilly, courtesy of a sparkling 48 yard run in the 4th quarter, finished as the game's leading rusher with an even 90 yards on only 5 carries.

Evan Chocon paced the Scotus ground attack with 54 yards on 9 touches, while young, promising quarterback Tyler Palmer was going 6 of 13 passing for 95 yards with a TD and an interception.

Bishop Neumann should remain at the number one slot in Class C-1 after the win, a week after knocking off #1 Norfolk Catholic. The Cavaliers will travel to 0-2 Syracuse next Friday, while a 1-1 Columbus Scotus will regroup to face 0-2 Pierce in a home meeting the same night.