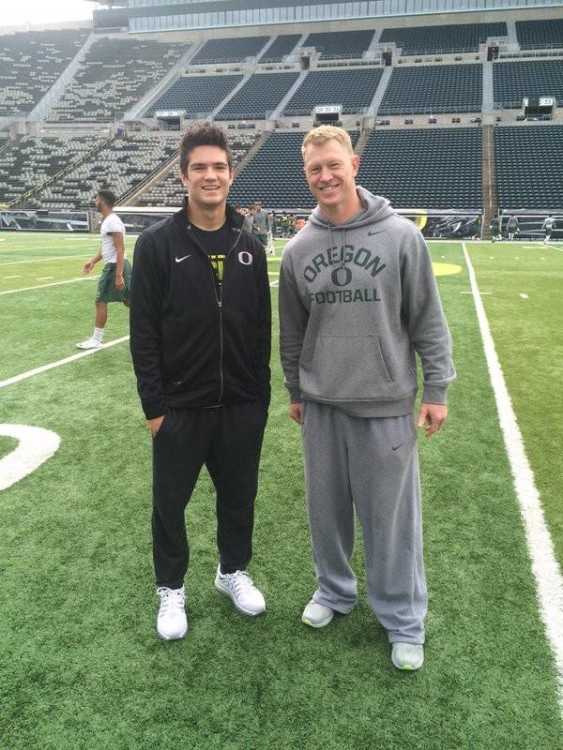 Traditionally this the toughest class of all when it comes to competing for the right to play in Lincoln for all the goods. 2016 will be no different and with the addition of Aquinas moving up from C-2, things become more difficult.

Perhaps it just me, but this year seems like more of a challenge to come up with a clear cut top 5 teams so we're going to give you a real pre-season treat and have a look at an even dozen C-1 teams that have a shot at making some noise in the playoffs this fall.

Noah Vedral-Wahoo Neumann - 6-2, 185, Senior (QB/DB) - Already committed to play Division One football for Scott Frost at Central Florida. That was just one of several offers at the D1 level for Vedral.

The gifted all-around athlete has not even come close to reaching his full potential despite the fact Noah threw for 1,527 yards (16 TDs) and ran for 823 (12 Tds) a year ago. The thing is, the way the great Tim Turman runs his offense, Vedral is more of a dual threat quarterback than just a straight pocket type passer and many teams at the collegiate level want that type of QB.

The handsome senior had a monster summer touring the camp circuit and turning heads with his ability to play that dropback QB style of game. Vedral will rarely show that side of his game at Neumann, but you can bet your last dollar he will hit the ground running with those tools when he hits the turf at Central Florida.

In my humble opinion, Noah Vedral is the top QB in all of Nebraska.

Where do you go from there?

Point is, Trevor Nichelson is good enough to be flirting with that 6,500 yard career mark, which would eclipse the great Mike Brower's (Fillmore Central) C-1 career rushing mark of 6,099.

I just cannot find enough superlatives to describe how good Mr. Nichelson is on the gridiron. And on either side of the ball, I might add.

Brett Kitrell-Ashland-Greenwood - 6-4, 280, Senior (OG/DT) - After missing nearly all of 2015, how badly do you think this Minnesota Gopher commit wants to get back on the football field? Brett Kitrell will simply make his hulking presence known in 2016 and you'd better pray he doesn't get mad at ya if you happen to be across the line for him.

The kid has has a phenomenal off-season in the weight room and now, at last report, is up to benching 350 pounds (yeah) and registering 465 in the squat.

How would you like to be in the shoes of super coach Ryan Thompson and have Kitrell and Nichelson as team leaders? And, by the way, nobody sane human being would tell Kitrell he's not a team leader.

Mr. Kitrell may make Nebraska sorry for not offering.

Lane Napier-David City Aquinas - 5-11, 185, Senior (FB/LB) - The thing that is so frightening about Lane Napier is that his name is being mentioned in the august company of "best players of all-time" at Aquinas.

That just leaves me speechless knowing how many great players have passed through those locker room doors for Ronnie Mimick at that coveted football school. And the funny thing about is, the fact those names may not be of the household variety down there in the Bohemian Alps South because Coach Mimick preaches the team concept.

Gee, you think that just may have worked that past several years?

Anyway, Napier has been a force both fullback and linebacker the past 2 seasons and has about the best football sense you'll ever find. The kid just longs for the Friday Night Lights.

Pure football player through and through. This dude could start for any Class A program in the state and shine.

I heard some say Heckenlively rushed for a "quiet" 1,501 yards (20 TDs) a year ago for the Tigers, but boy did he blow that "quiet" statement out the door with his selection to the C-1 All-State backfield, and as a junior to boot.

Not only can the multi-talented Heckenlively shine on offense, the kid is spectacular on defense as well. Zane made 79 stops a year ago (10 for losses) while also intercepting 3 pass and recovering a couple of fumbles.

I think Zane Heckenlively is the best back Falls City has ever had, although Cameron McNabb (1,501 yds/1990) may dispute that.

All comparisons aside, expect a huge season from this young man in 2016.

Norfolk Catholic - Yeah, well only 5 returning starters on offense and 2 on defense and no David Englehaupt, but you have the incomparable Jeff Bellar as a head coach (330-60 career mark), the prediction seems easy.

Remember, the Knights went 12-1 a year ago and lost a heartbreaker to Scotus in that Class C-1 final, but still have players back like sophomore Dylan Kautz and classmate Ethan Piper (6-4, 255), to soften the graduation losses.

Throw in quarterback Myles Vrbka, a 3 year starter at that critical position and you have the makings of another run at a title in C-1.

Jeff just reloads up there in the Magic Circle.

Wahoo Neumann - 6 starters back on each side of the ball from last year's 7-3 squad and the top QB in the state in Noah Vedral equals Success with that capital S.

Like Coach Tim Turman pointed out, the Cavaliers finally have some size in the line this season. I mean, Neumann is about like Aquinas every year, linemen that are under 200 pounds that just simply play with heart and grit.

This season will be different. And guess who Neumann opens up with at home next Friday? Just look above.

Columbus Scotus - Defending state champions lost a bundle of talent from last season but still return 4 starters on the "O" side and 5 on defense, plus a terrific group of seniors.

Tell you what, head coach Tyler Linder know his stuff and just may be be the best line coach in C-1, maybe the state. Last season the 'Rocks just crushed you with their line depth on offense and defense......especially defense. They simply wore opponents down with that depth and the players in there were relentless with their ball pursuit.

With names like All-State defender Evan Chochan, basketball whiz Dalton Taylor and a superior lineman that ran under the radar last year by the name of Wyatt Gutzmer, Scotus will again contend for a C-1 title.

Apparently Gutzmer wasn't that far under the radar because South Dakota State has already offered the 6-3, 225 pound lineman, who is also an outstanding wrestler.

Hey, teams like Columbus Scotus just do not go away a year after winning a state championship. Trust me on that one.

Ashland-Greenwood - You saw the two names Trevor Nichelson and Brett Kitrell above and outstanding coach Ryan Thompson as well. You also must know that the Bluejay family lost 18 year coach Reed Schwartz to brain cancer this summer. This beloved man will never be forgotten and the things that can be accomplished in memory of someone as cherished as Coach Schwartz cannot be measured by mere humans.

That fact alone will make this Ashland-Greenwood football family a scary opponent in 2016. Things like this cannot be measured by statistics or final scores and if you know the tight knit chemistry that exists in this wonderful community, you just know the upcoming football season will be special for the team that Bleeds Blue.

Ron Mimick's forces have played in the last five C-2 finals, winning 4 of those. They could have done the same in C-1. It's that simple.

The Monarchs have 6 returning starters on each side of the football going into this season. Names like Lane Napier, Brandon Svoboda and a dozen others you have never heard of, will make Aquinas a force in this class also. I can guarantee that.

One of the true football powers of Nebraska high school football and with the great Tony Smith directing the defense, not many points will be scored on the black and gold fellas.

Wahoo - If you go 7-3 in 2015 and return 8 starters on both sides of the ball, you're gonna be a talked about football program in Class C-1.

Then there is all-state candidate Jake Ruzicka (29 rec/482 yds) to toss the ball to at tight end. Jake is also an all-state type player at LB where he made 48 tackles.

The Warriors have another player that is an all-state type guy in lineman Sam Lindgren, who is tougher than nails at 5-11, 270.

The secondary is patrolled by junior Dylan Egr (5-9, 155) who made 63 tackles a year ago and pirated 2 passes.

Good grief, this Wahoo team opens the season @ Ashland-Greenwood, closes it at home with Neumann and has Norfolk Catholic and Aquinas sandwiched in between.

Boys Town - Never know about Kevin Kush and the Cowboys for sure until the season starts, but one thing I can promise you is Boys Town with have athleticism galore. Remember names like returning All-Stater Dominic Barrett, Dashawn Bates, Mike Mitchell, and TJ Davis (QB this fall?)

Falls City - Tigers of Coach Darin Fritz return 8 starters on offense and 6 on defense and have All-State RB sensation Zane Heckenlively back plus 6-5, 275 Ben Bauman in the line.

Good enough for me to think they can win 8 regular season games.

O'Neill - This may be the best O'Neill team in years with 17 of 22 starters back for Brock Eichelberger, who is not only an outstanding football coach, but one of the toughest football players I ever saw play. A terror when he played at Beemer.

Pierce - I told Chuck Micek this summer I felt bad for Pierce in 2016 because of the loss of so many talented seniors from that 2015 crew. The former all-stater advised not to feel sorry for the Bluejays.

Despite returning only 4 starters on both sides, Coach Mark Brahmer's Bluejays will be chomping at the bit to make the playoffs after missing out for the 1st time in 16 years, despite their 6-3 record.

The O-Line does return three starters and a dandy of a running back/linebacker named Caleb Sullivan will make some noise this fall for Pierce.

As usual, the Bluejay schedule is brutal with Aquinas, Scotus and Norfolk Catholic coming up in weeks 2, 3 and 5 and O'Neill in week 7. But then again, that is the kind of "sink or swim" schedule Pierce is accustomed to year in and year out.

Kearney Catholic - Rashawn Harvey takes over for the departed Dave Colling, but the former assistant has been around long enough, those Stars will hardly notice the transition.

This team is going to really tough in 2016 with 8 starters back on offense and 7 for the "D". You have to start with all-state candidate Matt Masker returning as field general.

Masker will have three first rate wideouts to target in Eric Pacheco, John Husmann and all-state contender Brady Holtmeier, who can and will play multiple offensive positions.

Holtmeier and Nathan Williams are very capable linebackers and the O-Line has anchor Brandon Merz (6-5, 250) to build a line around.

These boys from KC are always going to be contenders on the football field. Many of them have had bros who came before them and started for 4 years, just as they have. Lots of tradition here!

Chase County - Eight starters back on either side of the ball for the 'Horns out there in Imperial. Dan Lenners handles the head coaching duties out there and very well, I might add. 129 wins and 39 losses looks pretty impressive to me.

Dan will have one of the toughest pound per pound players leading the way for Chase in 2016. And that would be Bryson Fisher, a RB/DB that loves contact. Fisher rushed for 1,396 yards (12 TDs) a year ago and is a dandy defensive back.

The Longhorns will not throw the ball much, which could hinder them in the playoffs, but their line play on both sides of the ball is strong with 4 returnees back for more this fall. Oh, I nearly failed to mention that Chase has a pretty salty FB/LB dude named Dakota Wallin. Some of the 6-2, 190 pound Wallin's blocks and hits looked like they would send a defender halfway to one of the Dakotas.