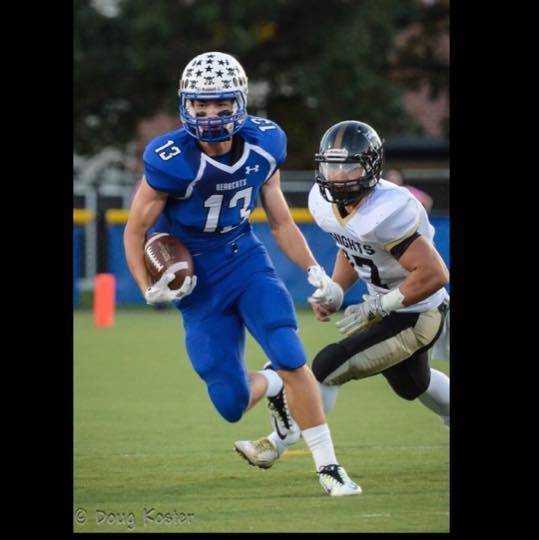 Today we salute a couple of players who excel on one side of the football and a couple that come right at you on both sides of that scrimmage line.

No time to waste, so let's get right to it. Oh, and by the way, the countdown to Opening Night 2016 stands at 27 days with the first day of practice set for a week from Monday.

Can you feel it?

I've been talking about Noah Urbanek since his sophomore season and for good reason. How confident is a guy that dares to wear #13 on his jersey? One of the better 2 way players in the state, regardless of class, Mr. Urbanek had 9 offers to play college football at last glance.

Last season Noah ran for 553 yards and 3 touchdowns in addition to catching 18 passes for 206 yards and 2 more scores for the 5-5 'Cats, who nearly pulled a 1st Round playoff upset win over Millard North before Freddy's boys rallied to pull it out 30-21.

But it was on defense where Urbanek did major damage to Kearney opponents. #13 made 56 stops. 36 of those were solo tackles and 10 were for losses, and that's in 9 games. Noah missed the September 4th win over Lincoln Southwest.

Urbanek also recorded an 84 yard Pick 6 'Cats 25-14 victory Lincoln East and just for good measure, returned a kickoff 88 yards for another TD. Big player that comes up big when it counts.

The Kearney ace is also very dangerous as a receiver out of the backfield, owning a beautiful stride like a 49 flat 400 meter track man. And talk about being disruptive on defense when he lines up outside the tackle. Ask Millard North about that. Urbanek was a royal pain to the Mustangs in that playoff game a year ago.

Look for an huge season for Urbanek this fall. Pure football player, this #13.

I'm telling you right now, you keep this youngster healthy the entire season and he is the most feared back in Class A. If the Viking line creates lanes like I think they absolutely will, Sargbah could go off for 1,800+ yards. And yes, I know Jordan Strong is back there.

All Sargbah did a year ago was step into the lead role as North's premier ball carrier after projected starter Tavion Seals was lost for the season before it even began. The speedy sophomore ripped off 865 yards and 8 Tds in his first 5 games.

But Sargbah ran into Omaha Central's #1 rated defense in Week 6 and exited after gaining only 22 yards. Milton would carry the pigskin only 8 more times after that, missing most of month of October. What could have been for the kid who bolted for 304 yards on 29 carries in the 2nd game of his career?

I can tell you right now, Sargbah has worked hard and enjoyed a great offseason for Larry Martin's Omaha North football family. The dude already runs a sizzling 4.3 forty so I'm wondering how much stronger and faster #7 is right now?

Here's the scoop on this Sargbah kid. The young man looked totally relaxed the very 1st time he played, and that was against eventual state runner-up Millard West in the televised season opener. Milton lined up 7 yards deep in the Viking backfield and was dead still until the snap count. And remember, the shoes he was filling belonged the first Nebraska running back ever to rush for over 3,000 yards. (Calvin Strong).

Sargbah's opening step out of that backfield is lightning quick and he gets to that hole before the D-Line can react. Much, much more powerful than you think, Sargbah packs a wallop when he makes contact with a defender. Quick and nimble with his foot plants, the speedy Viking can deep cut and change direction with one deceptive, fluid motion, leaving defenders with a hand full of air.

So, how does Omaha North come up with these runners who seem ready to bolt out of the gate the minute they hit the field as sophomores? Milton Sargbah has most of it already. Speed, great vision, patience, and power, and with Jordan Strong around, plus so many other name players, this Omaha North football bunch looks downright frightening entering the 2016 prep football season.

Didn't hear a peep about this kid last year until he made my 1000 yard list and then I watch some film, lots of film. Bryson Fisher is good........really good.

Two thoughts come to mind when you watch Fisher play defense. Either he is a rough/tough rodeo cowboy or a very fine wrestler. Wrestler it is.

The 175 tough guy rambled for 1,395 yards for the 8-2 Longhorns a year ago, recording 13 Tds. On defense, this hombre was just plain mean. Bryson made 49 tackles, 8 for losses, forced 3 fumbles and picked off 3 passes. And you talk about breaking up passes!

Bryson Fisher doesn't just bat passes away from the receiver he's covering, he separates the receiver from the ball before it arrives.......and how. Good lord, I don't know how many potential pass receivers I saw just get laid out an instant before the ball arrived. Man oh man, this kid can bring the wood.

This fall Chase County has 4 returning lineman so Fisher will get his yards rushing. You see, Chase doesn't employ the forward pass much. And talk about a coach who knows the game.....that would be one Dan Lenners, who owns a career 129-39 record while coaching the Imperial, Nebraska school.

Pardon my slang, but there "ain't" no way this Fisher boy will be overlooked by the time all-state comes around this November. Awful tough dude for 175 pounds. Benches 255, squats 270, and can deadlift 405 pounds. Add to all this is the fact Bryson has near perfect tackling mechanics. Honest to goodness, you could make a tackling clinic film and Fisher would be the perfect man to demonstrate how it should be executed.

Man, woman and child, you talk about someone with a nose for the football. Mr. Wallace be Da King of picking off passes in Class A. Josh has one of those hard-to-find radar chips only the great DBs possess.

If I'm not mistaken, Wallace pirated 8 passes in 2015, playing a huge role defensively for the 12-0 Wildcats as they marched their way to Memorial Stadium, losing a heartbreaker to rival Millard North. Wallace had 6 stops in that game.

The Metro Conference had a handful of pretty salty junior defensive backs last season and Wallace was one of the best. Not many top Millard North's Jack Begley, but Josh Wallace is one of the finest cover men I saw in Nebraska high school football last season. The dude just doesn't let receivers get behind him. And reflexes......Wow. Last season against Kearney, Wallace stole a Bearcat pass and brought it back 71 yards for a touchdown.

Considering the fact Millard West only allowed 213 yards a game defensively during that 12-1 season, 2016 should be a near repeat with 8 starters returning on that side of the ball for super coach Kirk Peterson.

So you can pencil in the name Josh Wallace on your pre-season list of solid All-State candidates. After all, he was 2nd team All-Nebraska and 2nd team All-Metro a year ago. Pretty tough to top 9 interceptions, but if anyone can pull it off, it's #20.