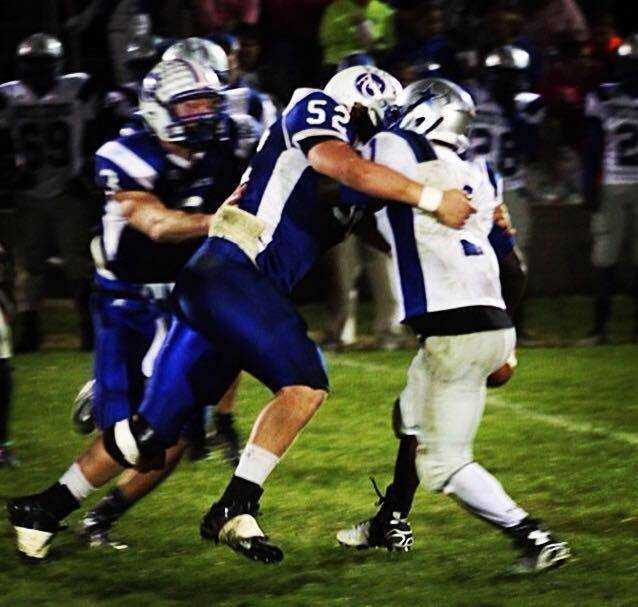 This thought just crossed my mind. Man, would I hate to be the man across the line of scrimmage from Brett Kitrell this fall. Let's face it, the young man was way above average as a freshman. Even better as a sophomore in 2014, and after having the summer of his life in the weight room and track across the street from his house, the kid goes down 6 quarters into his junior season. BANG! Torn ACL and it's done.

Shortly before halftime of Ashalnd-Greenwood's 2nd game of the season versus Syracuse, Brett hurdles a defender, lands awkwardly on on one foot while attempting a cut, and the unthinkable happens. Torn ACL. Junior season is history.

Personally, I have been through it. Tears your guts out. But there are bloodlines and smarts running through this Kitrell bunch and Brett toughed it out, was patient during his recovery and now is ready to dominate in 2016. And THAT, my friends, is why you do not want to draw the short straw and line up across the line from #52.

Earlier today, Ashland-Greenwood's Brett Kitrell committed to Minnesota for football. Nebraska may have assumed they could take their time recruiting this lad because brother Bo Kitrell is already a Husker. I won't get started on this subject again, but I feel Nebraska could have used this young man, who is a force on either side of the ball. End of short rant.

Brett Kitrell started as a freshman for the proud Ashland-Greenwood program, logging 63 tackles. 9 of those were for losses including 3 in that State Final loss to Cozad at Memorial Stadium.

As a sophomore, Mr. Kitrell was a beast. No other word to describe it. #52 applied the hurts to opposing ball carriers 104 times in 2014. A staggering 17 of those were for losses. Once again, Kitrell was a force in A-G's State Final appearance (loss to Boone Central/NG), making 7 tackles.

A year ago, Brett already had already crunched 14 tackles (3 for losses) in the Bluejay's opening season loss to Wahoo. Then came the heartbreak, but that's all ancient history and now the Minnesota recruit is ready to rock and roll in 2016.

On the defensive side playing tackle, Kitrell sheds blockers like water off a duck's back, getting to the ball carrier in a heck of a hurry. It almost appears that Brett has a radar chip in his brain that is programmed to get to anything shaped liked an oval and colored brown. I believe the correct terminology is "nose for the football." And the kid never stops pursuing the football until the play is over. Never, ever.

On offense, the dude is an overpowering figure handing his defensive man, especially when he pulls. Good lord, the defensive man awaiting the sweep play with Trevor Nichelson carrying the ball, frequently ends up on his sacroiliac. That has to be my favorite play, watching #52 raise up, pull, and lead the way around the left side. Crunch!

In my humble opinion, Brett Kitrell is as talented as any lineman in the State. And that includes Tyler Ciurej, Rudy Stofer, and Patrick Arnold.

You'd better have more than two hands full of fingers to count the Division One offers Logan Strom has received when you combine both football and basketball. And like Brett Kitrell, Strom has missed an entire season of football. A broken bone in his foot cost the 6-8, 240 pound Stom his entire sophomore gridiron campaign, so consequently it took awhile to catch up last season on the gridiron.

The exceptional, multi-talented Strom played almost exclusively on offense (TE) a year ago for Coach Tom Olson's Panthers. At 6'8" tall, Logan is an easy target for any quarterback and with his outstanding footwork and ability to catch the ball in traffic, the young guy is the kind of difference maker that means wins to that Norfolk football program.

Strom was a force on the basketball floor as a freshman and that ability on the hardwood can be seen on the football field. Besides catching the football, another one of number 87's talents is his blocking ability. Tight ends are supposed to block and I can assure you Logan Strom can execute that task. In fact, you can see that the Panther offensive staff puts big Logan in motion sometimes to give him a chance to really lay the wood on a block. And you know, it's no secret that a high school aged youngster may just shy away from the action a bit after one or two of those crunches applied by Mr. Strom.

Is it safe to assume Logan Strom will play both ways for the Panthers in 2016? Of course I'm a football guy so you know the answer to that if I was coaching. Wouldn't that be a terrible waste to have a 6-8, 240 pound natural watching the action from the sidelines when Norfolk was on defense? As the old saying goes, "you can't coach 6-8, 240." I'm betting the dude is playing "D" this fall.

Norfolk lost a great senior group to graduation last season, but with players like Strom and Lane McCallum, the upcoming football season just may be a great success for the Panthers.

And what sport will Logan Strom choose to play at the D-1 level in college?

My guess is basketball, but for right here, right now, that Panther football program can enjoy #87 and his top notch talents and I can't wait to see how the season unfolds for Logan and his gridiron buddies.

Mother of Mercy can this kid go. Last season the jet propelled junior rambled for 1,805 yards and 28 TDs for the Plainsmen, leading his team to the 2nd round of the Class D-1 playoffs.

Sis, who runs a :10.9 hundred meters in track, looks like he owns :10.5 speed on the football field. I'm telling you, this dude gets even a sliver of his shadow past the defense, he is off the races and pulling away with every step. Derek Sis may have the sweetest stride in all of 8-Man football. He looks like a 48 flat four hundred meter runner when he gets it rolling with those long, pretty strides.

Sis has been a force for the run happy Perkins County team since his freshman season. He introduced himself that year by running for 584 yards. Derek ran for 1,002 as a sophomore and has accounted for 3,391 yards rushing during his 3 year career and seems headed to the very prestigious 5,000 yard career rushing club.

Last season Carlie Wells had his Plainsmen rolling, averaging an amazing 68 points a game during the regular season. Perkins disposed of Twin Loup 60-14 in the opening round of the playoffs, then were edged by Andy Kerkman and his Clearwater-Orchard buddies 38-36 in a 2nd round home playoff contest in Grant. That baby stung.

This fall, Perkins County returns 6 starters on offense plus 5 on the defensive side, so another great year is in store. The Plainsmen also may very well have the swiftest backfield in 8-Man football with Sis, and junior flyers Charlie Johnson (QB) and Josh Johnson. And remember, Derek Sis needs only a tiny crease in that line to break a long scoring run. Toss in the fact that Sis has a terrific stutter step, plus a sliding/gliding running style, you have an athlete that is capable of breaking a long scoring jaunt every single time he touches the football.

Simply put, this dude is good and headed to a 4th consecutive all-district selection and repeat all-state performance. One of the best in 8-Man football for sure.

Boy, did this guy take the team on his shoulders during Aurora's 2015 playoff march to the Class B finals. All Dibbern did was rush for 899 yards the last 5 games of the season. The tough running junior averaged 33 carries and 180 yards a game during that crucial stretch for the Huskies.

Dibbern tormented an outstanding Gretna team in the quarterfinals with 180 yards on 42 grueling carries, then turned right around and toted the ball 40 times for 196 yards the following week in that semifinal win (21-14) at McCook.

In Aurora's heartbreaking 32-21 Class B championship loss to Elkhorn South, Dibbern actually out rushed the amazing Moses Bryant, coming away with a game high 166 yards on 29 carries.

The astounding thing about Preston Dibbern is the fact he played in only 9 and a half games for Aurora in 2015. After running for 131 yards in the Crete opener, followed by a 141 yard performance against Alliance, Dibbern departed with an injury after only 37 yards in a week 3 (Sept. 11th) win over Adams Central. He was out for a month before returning on October 9th vs. Seward. Long layoff, but the amazing junior bounced back with terrific success.

Preston Dibbern's running style? Well, #23 has 4.5 speed in the forty, an :11.3 hundred time, and scoots along at around 23 flat in the two hundred. The kid has incredibly strong leg strength and possesses tremendous vision with a very patient running approach. Preston follows his blockers very, very well and seems to never, ever be stopped without lunging for extra yards after contact.

Although not used a ton as a pass receiver, Dibbern is lethal on flare out throws coming out of that coveted Huskie backfield. The dude is tough as nails as witnessed by his ability to run right into the heart of the defense, dragging defenders as he lunges forward for those precious yards after contact. And I might add that Preston has terrific balance that was on brilliant display in McCook in that Class B semifinal contest..

With any blocking whatsoever, Preston Dibbern will have an outstanding senior season and I have never known an Aurora team that didn't have an O-line that failed to open holes for a back like #23.

Final prognosis, this young man should shine in 2016 for an extremely proud and tradition rich Aurora team. Dibbern is right up there with Class B's best running backs and that Huskie bunch should be right in the thick of that wicked Class B title chase.