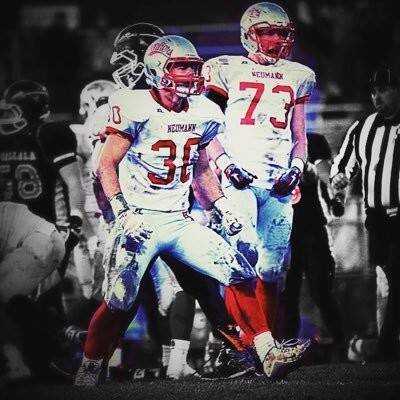 The countdown to Nebraska high school football's opening night 2016 is at 47 days. We have now arrived to Part 6 of our player profiles with many more to follow in the coming weeks.

Today we will tell the story of a running back who burst on the high school football scene like a 4th of July rocket and never let up. We'll also salute a quarterback that performed a minor miracle just to make it through a brutal schedule, let alone post the outstanding numbers he produced.

Our final pair of athletes are without a doubt, two of the best defenders in all of 11-Man football. These two gentlemen bring the wood with such tremendous force, the offensive player with the football may think again as to whether they want another meeting with either of these defenders.

Let's meet the foursome of players that should be gracing the gridiron headlines this fall.

Holy smokes, last season it was almost like Colby Ensz was transformed into Superman in game 4 against Freeman. The first 3 games of 2015, Ensz carried the ball 38 times for 99 yards and one score. I can understand that total, considering that the Trojans were playing the likes of HTRS, Wilber-Clatonia and Sutton, especially the last 2.

But against Freeman, the compact runner escaped for 272 yards on 23 carries and 5 touchdowns. Funny thing was, Tri-County did not appear to change formations offensively, although the blocking schemes plus the addition of more pitch plays may have played a role.

The following week versus a pretty decent Malcolm team, Colby Ensz unleashed a fury from beyond that nobody will ever forget. #21 carried the football 25 times, rushing for an incredible 420 yards and another five touchdowns.

Two games, 692 yards, 10 TDs, and it continued until rugged Hastings St. Cecilia finally held the Colby to 60 yards in the first round of the C-2 playoffs.

Colby Ensz also added over 300 yards on kick and punt returns, swelling his total yardage figure to 2,130 for the year. That's only half of this kid's talents.

On defense, Colby made 68 tackles from his linebacker post, 6 of those going for losses, while 4 were quarterback sacks. He also intercepted 3 passses and hit the man with the football with such great force, he caused 4 fumbles, recovering one.

It isn't like Colby Ensz didn't have talent from the get-go. As a freshman, he ran for 518 yards, but the transformation I saw from game 4 going forward last year was borderline unbelievable.

Yes, the blocking improved, but Colby's cuts became sharper, the blocking reads were crisper, his speed seemed to kick into a higher gear and the dude just kept shedding tacklers. He pulled off some terrific cut back against the grain runs and really packed a punch at the point of contact, which was not new, but more noticeable.

A huge transformation will take place at for Tri-County football this fall. The Trojans drop down to 8-Man football. I'm not certain what Tri-County returns for 2016, but the drop to 8-Man should make Mr. Ensz even more lethal if he has any blocking up in the trenches.

Keep an eye out for Colby Ensz this upcoming season. The Trojans open up with 2 other schools dropping down to the 8-Man ranks, Superior and Thayer Central. That should set the tone for Ensz and company before they run into powerful BDS.

Honest to goodness I cannot figure out how this kid made it through Shelby/Rising City's 3-6 season and still threw for 1,751 yards. This may not be the case every game, but it seemed like every time Hoatson took the direct snap out the spread formation, the poor guy was running for his life. You know, like Sheldon Cooper on the Big Bang Theory episode where he was chased by the "hound from hell" because he had a pocket full of hotdogs for Penny.

OR better yet, Jake seemed like the little kid that walked to school and was chased by the same big ole' mean dog every single day, but always made to class in one piece.

The Huskies first two seasons in the 11-Man ranks were certainly no picnics. In 2014, they went 0-9, Hoatson throwing for 343 yards. But last go-around in 2015, things improved to 3-6, even with Hoatson on the run. And Jake's 1,700+ passing yards and 12 TDs signalled this guy was for real. Yes, he tossed 10 interceptions, but the good numbers still speak volumes.

But things may be a changin' for the Huskies in 2016, folks.

It would be a huge understatement to say the NSAA wasn't kind to the Huskies with this year's scheduling, but the boys from Shelby may be more prepared than ever for the onslaught.

Hoatson has some serious help returning this fall, including both his favorite targets in Nate Grossnicklaus and Austin Coffman. He'll have 3 returning offensive linemen to help with that pass blocking (Carter Smith, Jase Lloyd and Alex Luchsinger) and a pretty solid runner in Drew Schultz. The defense also returns a wealth of talent as well.

Jake Hoatsons forty time of 4.98 won't light things up, but his ability to scramble and throw on the run with 67% accuracy overrides that. Yeah, I said sixty seven percent completion rate.

All kidding aside about Hoatson running for his life on every play, many of Shelby/Rising City's plays were designed roll-outs. But don't be fooled here, Hoatson can drop back 3 or 4 steps and nail a receiver as well as nail a teammate while on the roll. Actually, I haven't seen too many quarterbacks in C-2 that have the ability to spot an open receiver and deliver the ball as accurately as Jake Hoatson. And you certainly do not want #5 to take off running as witnessed by his 477 yards rushing (4 TDs).

On defense, the tough-as-nails Hoatson was in on 91 tackles for the Huskies from his middle linebacker position, and remember the dude only tips the scales at 165 pounds.

Another big plus for this football team is their playing their home games at a beautiful state of the art football complex, complete with brand spanking new artificial turf.

My old buddy, Superintendent Chip Kay does things right down there in God's Country South.

Here is a bit of solid advice concerning Mr. Blum. If you happen to have a football in your hand, make a concerted effort to avoid #30. Run the other way, plant your best move, whatever. This gentleman eats ball carriers and spits them out.

I'm telling you, this kid is a thrill to watch. His feet are actually running in place a couple of counts before the opponent's ball is snapped. It isn't even 1 full tick after that snap is delivered and Theo Blum is off pursuing the man with the football. The kid has built in radar that is directly connected to the football. I kid you not, one would think that Blum actually knows the offensive play before it happens.

The dilemma facing any offense playing Neumann is how to block Theo Blum. As stated before, his feet are moving before the snap and #30 is off on a beeline straight to the ball carrier and he seems oblivious to anyone in the way. He has thrown would-be blockers out of the way, bowled them over, or simply hopped over them to get to the football.

I'm not sure who the defensive coordinator at Wahoo Neumann is, but this man has to be tickled to death that Theo Blum is on his side.

Oh by the way, the lad does play offense. Noah Vedral must not have targeted Blum much last season because he only caught 10 passes for 213 yards and a score. Could that change this fall?

My last question is this? How much weight Theo Blum can push doing leg extensions? Infinity? Good lord the young lad has powerful legs. Is some college looking at this kid, because I can guarantee Mr. Blum would be a sure-fire All-State linebacker for any Class A school in this state.

Oh man, how about this complete football player! All Begley did a year ago was help lead his Millard North Mustangs to a Class A State Championship. 89 tackles, 7 pass breakups, 3 interceptions, 3 forced fumbles and all 3 recovered. Out of those 89 tackles, 70 were solo stops.........70.

Incidentally, Jack Begley had 10 tackles from his free safety slot Millard North's 21-14 state title win over Millard West. How clutch is that?

Before I proceed, I'm wondering what the Huskers knock on Begley might be? I realize the kid runs a 4.49 forty and I'm guessing perhaps they think he cannot cover a D1 receiver that burns a 4.3 or so in open spaces. Is that it? Does Begley absolutely have to play free safety in college? Couldn't he play somewhere in the middle and play some run support and have somebody else cover the speed demons?

Anyway, Jack Begley is about as sure a tackler as you'll find in Class A. He has a nose for the ball and there may not be a better cover man on kick-offs than #3. Begley absolutely reminds me of Ben Eisenhart when he played for the Huskers. Begley and Eisenhart, Head-Hunters, Inc. Has a nice ring to it doesn't it?

This guy also started as a sophomore, logging 45 tackles and an interception. So, Begley has gone from 45 tackles to 89 in just one season. What will 2016 bring for the Super-State standout?

As witnessed by some of his offers, it is reasonable to say Jack Begley is a very intelligent football player. Princeton, Harvard, Yale, Cornell, Colgate do not offer full ride scholarships to dummies, so what more could you ask if you are a Division One institution?

No worries here, I see Begley having a senior season that opens even more eyes (doors) and impresses a few of the big boys. Nose for the football, sure tackler, that God-given built in radar for knowing the whereabouts of the football at all times. #3 has it all.