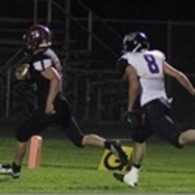 On this day, why not salute one of the toughest son-of-a-guns in the 8-Man ranks. This guy is not only a fabulous running back, but a feared linebacker that also happens to be one of the fastest sprinters in the state.

We'll also introduce you to an 8-Man gunslinger who is getting some looks in the D1 ranks and an 8-Man TE/DE that just dearly loves to give bear hugs. Nice guy.

Last but not least, you need a lineman in this group and I choose this guy as my personal body guard when I'm in his area. We'll cover that later.

Man, Henderson and Heartland high schools have had some terrific athletes over the years but this young man ranks right up there with some of the very best. If I were choosing a team for the 8-Man All-Star game, Austin Stuhr would be one of my 1st picks.

Last year, a season after Heartland graduated most of it's players from one of their best teams ever, Austin Stuhr took the reins and led the Huskies to a 4-5 record against very tough competition.

All Stuhr did was rush for 1,511 yards on 194 carries (8.8/carry) and score 20 times on the ground. The fleet junior also caught 8 passes for 79 yards, two of those going for TDs. On defense, the fast pursuing, cracking middle linebacker made 114 tackles, 53 of those solos. Austin also brought back three kick-returns for touchdowns and blocked 2 field goals, both in the Blue Hill game.

On the track, Austin Stuhr nearly won the Class D championship by himself, winning the 100 meters, grabbing 2nds in the 200 and 400, plus anchoring the 400 meter relay to a runner-up medal. The Huskies ended up losing to rival High Plains by a mere 3 points in Omaha last May.

What makes this guy click? Well, first of all, if Austin gets around the end as a ball carrier, it's over. With :10.9, :22.9, and :51.1 speed, pick your poison. The view of his behind will be in clear focus. Want to feed Stuhr the ball and send him up the gut? Not a problem. Stuhr loves playing "bowling alley", knocking defenders over like pins.

Number 25 will often times take the direct snap and really complicate things for the defense. Stuhr also has good hands, so he's a weapon on the receiving end of a pass. And on defense!

This kid can sense a ball carrier the minute the ball is snapped, and man can he pursue. Austin loves contact, so the man with the ball must seem like Huskie bait to #25. The dude can bring the wood big time and apply the hurts, making it stick in your memory bank.

I told you about Heartland going through a "rebuilding" year last season. Well, they made it through that year and learned a ton. This season the Huskies return Six starters on both side of the football. 12 of 16 starters from last season's pretty nice 4-5 squad are back for more.

Remember, Stuhr isn't all by himself in the backfield either. Junior QB Lane Huebert returns after running for 520 yards and passing for 582 as a sophomore. I believe they call that a "dual-threat" quarterback. Throw in Class D Pole Vault champ Ben Driewer, who gained over 400 yards and also caught some passes, and you have a superior backfield that is very difficult to cover.

Add Kyle Ott, who missed all of 2015, to an already good offensive and defensive line and things look really promising for those boys from Henderson.

Keep your eye on Austin Stuhr and those Heartland Huskies this fall. I'll be watching, that's for sure.

Lord above, where do you begin with this kid? All-American boy going into his 4th season as a 2-way starter for Josh Deines and his Sandhills-Thedford squad. Jacey Nutter went from a freshman throwing off his back foot to a senior-to-be drawing some D1 attention.

Despite throwing off his back foot, Nutter still threw for 1,009 yards as a 9th grader and hasn't stopped improving since.

The poised lad from Thedford guided his team from 4 wins as a freshman to 8 wins his sophomore year to 10 victories and a step away from the finals a year ago. Last season, Jacey Nutter completed nearly half of his 202 throws for 1,447 yards, 27 TDs with only 10 interceptions. He also ran for 501 yards, scoring an additional 7 touchdowns. The Knights main man ended up scoring 77 total points a year ago and 29 of those came on point after kicks. 29 of 36 to be exact. He also punted the ball 19 times for an average of nearly 38 yards a boot. That's All-State material in 8-Man football.

On defense, the ball hawking junior pirated 9 passes, which led the entire state in that category. More impressive was those 9 picks totaled 121 yards in INT returns. Not bad for a guy already tired from covering a receiver.

Nutter was just all over the place defensively, making 92 tackles. 66 of those stops were solos too. His Knights team came within one game of making a trip to Lincoln but unfortunately ran into an outstanding CWC team led by a once-in-a-lifetime athlete named Brenden Pelster.

On defense the splendid sandhills athlete has made 167 solo tackles, added 137 assists for 305 total tackles. He also has 18 career interceptions and 5 recovered fumbles. And the dude may be on the verge of his finest season yet. Wow.

So here are the particulars on Jacey Nutter. He is listed at 6'0" and plays around 6-3. Forty time is down at 4.7. Nutter runs more like a 4.5 guy. His bench is listed at 245 and squat around 350. Fact is that Jacy Nutter plays a ton stronger than that.

On offense, this young man has the poise of a college drop back QB but can throw on the roll with tremendous accuracy. Very strong arm, but uses his body motion with very high ability. Nutter can also flash great strength and accuracy while retreating in the pocket and good lord, you do not want the kid to take off across the line. That 4.7 turns into 4.5 with power.

Be fully aware this Sandhills-Thedford bunch could garner a D-2 State title this season. Besides Jacey Nutter, the Knights have Junior Riggen Anderson, who rushed for 1,122 yards and 18 TDs as a sophomore. Colby Collier, another back, ran for 793 yards and 17 scores in 2015. Think the Knights backfield is set?

Yes, S/T lost some pretty good stoppers on defense in Cole Hewett and Greg Schukei, but with hitters like Austin Coffman, Tyler Swisher, and Cade Pokorny coming back to join that backfield bunch on the "D" side.......scares me just to talk about it.

This football guy sure wishes Thedford wasn't so far away. Can I talk Jacey Nutter and company into coming to Grand Island and playing a game? Not a problem, I'll catch you fellas in Lincoln.

Big dude. Really big, solid, quick fella that will run over you after catching a pass or come up and give you a friendly bear hug on defense. Alright, I lied about the friendly part.

Tyler Gideon was a key figure in that 2015 Longhorn machine that found it's way to Memorial Stadium for the Class D-1 finals opposite powerful BDS. The 'Horns came within a whisker of dropping BDS had it not been for the late game heroics of Riley Tegtmeier.

Big Tyler was nearly impossible to take out from his defensive end slot last year. Gideon was in on a gigantic 92 tackles, 13 behind the line, including a sweet 13 yard sack in the title game.

On offense, no defender wanted to see Tyler Gideon in open spaces. #4 was like a runaway streamliner after he pulled in one of Victory Sikes pinpoint passes. All kidding aside, there is only one area on Tyler Gideon's body you have a shot at making a tackle. His ankles. It is an absolute waste of time and an invitation to injury to tackle this man high.

Years ago I saw a video clip of an angry black rhino charging a moving train engine in Uganda and actually knocking it over. Honest to goodness I thought of this video when I saw Gideon roll a defender in that State D-1 final.

Tyler "The Rhino" Gideon. Believe it.

Once again, I couldn't find any particulars on Gideon, but I wonder if Coach Luke Gideon even cares about bench press, forty times, pro agility time. Luke just grows em big and toughens 'em up in Longhorn Country and Tyler is a shining example.

All you have to know is Mr. Gideon is fast enough to sack your quarterback in a heartbeat and drill him into the ground. Nimble enough haul in a pass and mow half your defense down on the way to the end zone, or give your ball carrier a sweet little Burwell hug and say night, night.

Sure-fire All-State player for the 'Horns this fall.

This kid had to be the most imposing looking high school center in all of 8-Man football a year ago. Man, has Miller improved since I saw him play as a sophomore, especially on defense.

After playing 8-Man football the past three seasons, Miller and his Cross County pals will move up to the 11-Man ranks for 2016. Miller had his way with most players at the 8-Man level and is receiving some Division One looks because of his size and athleticism, but partially due to his handling of the Center position.

Here are the particulars of Big Hunter. 5.38 forty time. Does the pro agility drill in 4.62, benches 300, squats 425 and the big fella can deadlift 500 big ones. Miller's wingspan is obviously huge and he can get off his defensive position in a hurry for his size, and if you happen to have a football in your hand, that isn't real good.

What really caught my eye is how quickly he gets after his block after he snaps the football. Sure looks like the kid has worked his tail off on that technique.

As I said, Miller has really caught fire since I watched him perform a couple of season back, but the thing I like about this dude is that he shows emotion on the field, especially after making a tackle. It's controlled, but that type of thing fires up the troops.

Speaking of troops, Cross County has a group of seniors that have played together, many as starters, since their freshman year. Yes, they took some awful lumps, but you could see signs of what was to become of this bunch last season despite the 3-5 record.

The Cougars have a 1000 yard rusher returning in Tanner Lamoree, a terrific pass defender in Alex Dubas (6 INTS, 3 fumble recoveries), and some fine lineman to compliment Big Hunter. We'll see how 11-Man football treats Cross County as they battle in rugged District 5 with the likes of Centennial, Sutton, Fillmore Central, and Shelby/Rising City.

**And so it is, that I choose big Hunter Miller to be my personal bodyguard when I head to Stromsburg for a game. Actually, I've never needed a bodyguard in nearly 50 years of watching high school football but it sounds kind of impressive to have a guy like Hunter in case a bevy of 75 year old ladies decide they want to kidnap the old guy.

What a vivid imagination......hasn't happened yet.

(inside story that would take too long to relate)