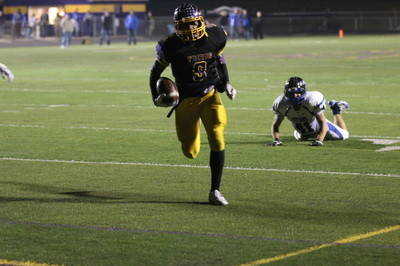 Bellevue West RB Jaylin Bradley (#9) scores one of his 20 TDs in 2015. Bradley may be the best RB in Nebraska high school football.

Today, how about featuring Class A's leading rusher, a high caliber quarterback that will bedevil Class C-1 defenses for the next two years, a wide-receiver from Millard North, yes you heard right, and the dude that opens some Mack Truck sized holes for our featured RB.

Really tempted to anoint this kid the best running back in the state. The improvement Bradley made from his sophomore to junior seasons was incredible. The fluid running Thunderbird not only increased his rushing total from 601 yards to 1,712, but seemingly developed into a top notch player in just 9 months.

Bell West came within one skinny point of playing Millard West in the Class A finals a year ago and Jaylin Bradley was the main reason for that. Number 9 simply made the T-Birds into more than a one-dimensional offense with his homerun rushing capabilities.

It's a whole lot easier to defend a team that throws a gazillion passes a game and offers no running attack to speak of, but with Bradley back there racking up 11 consecutive 100 yard rushing games, Bellevue West was dangerous, and will be again in 2016.

Jaylin Bradley rushed for 1,712 yards on 195 carries a year ago, scoring 20 touchdowns. Many of those scampers came from long distance as witnessed by his nearly 9 yards a pop.

What type of runner is Bradley? Let's put it this way. He makes multiple cuts only if necessary and his sweet ability to accelerate in and out of those cuts makes this dude extremely lethal.

Jaylin also wastes no yardage on his runs. Shortest route to the end zone, Bubba, that's Bradley, and when he sees the space has opened up, the jets kick in. Bradley has also been known to take a direct snap from center and take off. That is when you see the weaving and gliding ability of this kid. And.....don't think for a moment that Bradley couldn't launch an aerial after that snap........and will this fall.

Not certain about his forty. I'm guessing around a schoch under 4.50, but you certainly would not want to let this guy get even a half step past you.....He gone.

You would have to get up into the Class A ranks to find a more accurate quarterback. Last season as a sophomore, Masker completed 62% of his 208 throws for 1,724 yards and 24 touchdowns with a mere 6 picks.

You throw over 200 passes and complete 62% of those tosses, you are a top notch 11-Man high school QB. Matt's average yards per completion was 13.4 yards a pop so the dude will pick your defense apart little by little. Remember Florida State back in the day?

Last season Kearney Catholic missed qualifying for the postseason for the time in 13 years despite beating a 7-1 Holdrege 21-20 in overtime the final regular season game. Missing the playoffs at that school just doesn't usually happen.

Here's the deal on Matt Masker. Pretty much a straight drop back type QB that has an incredibly quick release. I mean, this youngster gets rid of the ball in a hurry and has 4 of his favorite receivers coming back for 2016. Erik Pacheco, Brady Holtmeier, John Husmann and Brett Kaiser accounted for 1,160 yards and 14 TDs for Stars in 2015 and Mr. Masker knows their pass routes like the back of his hand.

With his size, Masker has the look of a stereotypical type QB that never flinches after he drops back to throw. Despite a 4.84 forty time, the Kearney Catholic dandy can scramble in the pocket and throw on the run with precision. One thing that has not happened is Matt Masker taking off on the run. No need to thus far when you release the ball in less than 3 seconds and complete the pass at that 62% clip.

It will be a new era for Stars football this fall with longtime assistant Rashawn Harvey taking over for the very fine Dave Colling, who moved on after 10 seasons with Kearney Catholic. Harvey has been the offensive coordinator in recent seasons. They won't skip a beat with Coach Harvey, who is a big, tough hulking figure of a man. Rashawn Harvey's day gig is Asst. Director of Student Services at UNK, but I'll guarantee you he can coach football and I'm wagering he prefers to be called "Sir".

Matt Masker, by the way, will be a 5,000 yard career passer when his football days are over at Kearney Catholic.

This little dude is one dangerous, All-State football player for Kurt Peterson's state runner-up Wildcats. Last season, the slippery Wyatt caught 52 passes for 701 yards and 11 TDs. And, you want to know something amazing about those 52 receptions?

Shae Wyatt was targeted 56 times. So this means the young man missed hauling in only 4 passes all season a year ago and three of those came in a road game in Kearney.

So, in the remaining 11 games Shae Wyatt played, the splendid wide receiver missed only 1 out of 53 times he was targeted by Millard West QBs. How unreal is that?

I'll tell you another thing about Shae Wyatt. This kid comes up big in big games. How about 5 opportunities, 5 catches for 121 yards in the Class A title game against Millard North? Wyatt also completed a pass for 24 yards in that contest and averaged 24 yards each on 2 kick returns that night.

Here is another staggering statistic on Wyatt. He carried the football 12 times in 2015 for 130 yards. No great shakes right? Wrong. Every 3rd carry went for a score. Yep. One against Millard South, 1 vs. Kearney, and one each in the state quarterfinal game against Papio South and the in the semis vs. Omaha North. Big Time.

This fall the Cats return 4 offensive starters and 8 on defense, so expect another solid season for Millard West and some huge input from Mr. Big Time, Shae Wyatt.

I know one guy that dearly loves this big guy and that's Jaylin Bradley. And well he should considering the fact Taylor Ciurej serves up more pancakes than IHOP on a Sunday morning.

Big Taylor already has offers from South Dakota, South Dakota State and Liberty and is simply one overpowering offensive guard. I'm telling you right now, once Ciurej establishes contact with his "victim" (aka defensive lineman), it's over. The 288 pound hulk drives 'em downfield into the turf with such brutal force, only their feet are sticking out when he's finished.

Ok, I do agree he may want to keep those feet churning a bit more on pass blocking but my guess is you will see that happen before Bellevue West hits the field against Papio South August 26th.

It may be difficult to argue that this lad might be the best lineman in the state. And the scary thing is that Taylor's teammate Sam Vanderslice is no slouch himself. So how good is Bell West's O-Line going to be when late August rolls around?

Hate to keep harping on this, but Huskers, perhaps you should take Coach Bowden's advice and amp up your in-state recruiting. But what do I know.