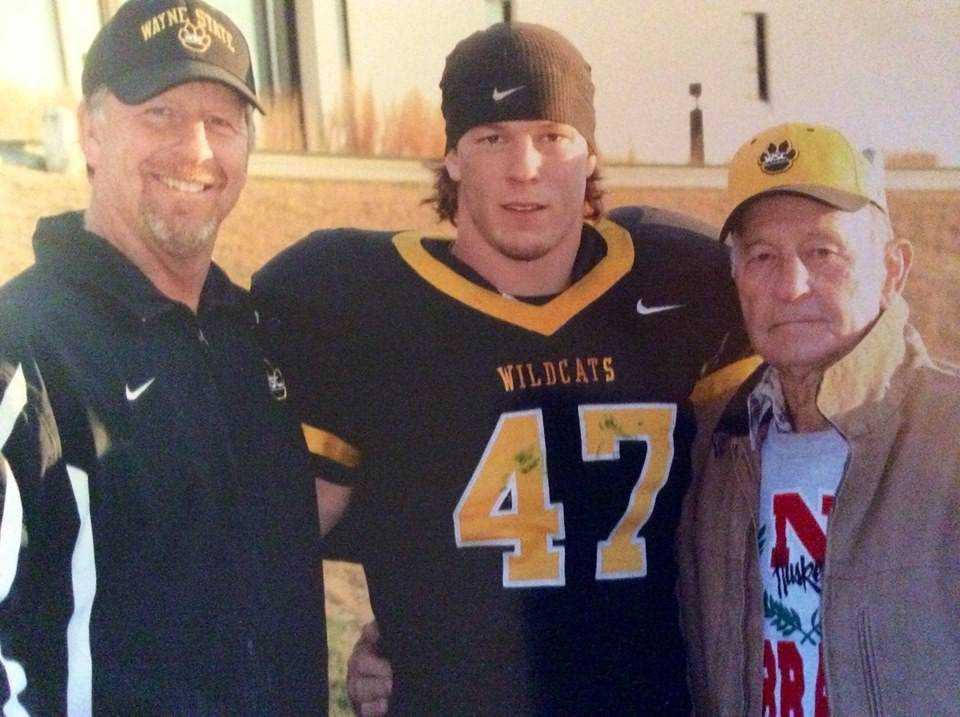 Donny Baker during his Wayne State playing days. His is flanked on the left by his father Dave, an all-state back from St. Edward and grandfather Don, a legendary All-State FB,BB and Track star from Genoa (1942).

Donny Baker, a third generation all-state athlete from St. Edward high school, has formulated a great setup for testing high school football athletes statewide. Young Baker, not only comes from great athletic bloodlines, but was raised in a farming community with small town ideals that focus on hard work.

Donny played football at Wayne State College after his playing days at St. Edward, and eventually saw not only a need for testing high school athletes around the state, but also creating a website that contained those results. One of Donny's goals was to make it simpler for college coaches and recruiters to find much needed, tough to find information.

So many young men are overlooked year in and year out because this information is not available. I know how difficult it is for me to choose an All-State football team in each class without nomination sheets from coaches, and often times it is difficult to get the stats that just might make the selection process a bit easier.

It has been said many times that in this age of high technology, if you are good enough at a sport the colleges will find you. I'm sorry, but this is not always the case. Potential D-1 football players in Nebraska may have a decent shot at being discovered, but what about a young guy from a Class A school that has little varsity experience, but pulls off terrific testing results and has simply been buried behind some all-state upperclassmen? Ditto for the smaller class players that may not be D-1 material but certainly could easily play at a smaller college and do well.

Hey, any kind of help paying for a college education is what every athlete hopes for and not every player is Division One material either.

Here is what Donny Baker has formulated. He calls it The Nebraska High School Football Combine. The slogan is "Train 4 The Next Level." Simply, "T4NL."

Baker has purchased some very high tech testing equipment that will produce very accurate, electronic results. Donny has set up four locations for the initial testing.

The locations will be in Omaha, Lincoln, Grand Island and Boone Central high school in Albion. All Combines will be run on artificial turf and will consist of testing in 40 yard dash, Pro agility, Vertical jump, and broad jump.

Additional information such as weight max outs will be acquired from coaches to be posted Donny's website along with the testing results, giving the athlete a ranking against other Nebraska, based on all classes, year in school, postion or a specific testing area. Obvioulsy, this initial testing process will be focused on High School Football.

Now you know why this caught my eye.

Here is another very cool thing about this entire process. After this initial round of testing, Donny and his Advisory Board will take the results, along with the player's 2015 football stats to identify the top 100 athletes in Nebraska. However, every athlete's testing results will appear on The Nebraska High School Football Combine site.

Honestly, I think this Top 100 list will serve as a motivational tool for players not on that list, to improve their own skills throughout the season, not only on the field, but in the weight room.

Here is the best part of Donny Baker's idea. The cost per athlete is only $10. Ten bucks. For that price, it may be cost effective for a coach to send their entire team to one of these Combines rather than take the time to do it themselves. And remember, these results will provide college coaches and recruiters an easy way to see Nebraska prep football talent in one click.

I have no vested interest in this other than being on the Advisory board. It just seems to me that young Mr. Baker has come up with a cost efficient, very effective means to measure a football athlete's testing results that are usually not available anywhere. And the entire Combine is not a long, drawn out process either The entire Combine testing should take around two hours and the fact all are on artificial turf gives equal results due to a uniform surface.

If you are a high school football player or coach, I think this thing would be worth a website click.

Here is a link to Donny Baker's site which conatins all the information.

There is also a Facebook page......t4nl nebraska high school combines.