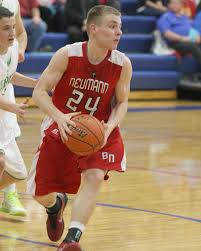 Bishop Neumann's Ben Simons, part of the Cavalier backcourt, which may be the best in Nebraska.

Here is a glance at the Class C-1 District Finals to be contested Monday evening.

(17-6) Wilber-Clatonia vs Louisville (16-10) - No previous meetings between these teams during the regular season. It's been 9 years since Louisville has been to Lincoln and 5 seasons for the Wolverines, who have never notched a win in it's three appearances there.

W/C has 2 losses in its last 5 games, one coming at the hands of a 9-13 Centennial squad. Meanwhile, the Lions have won their last 6 straight. Neither team boasts a killer schedule.

Wilber-Clatonia has a dandy junior in 5-11 Brice Broz, who averages 15.5 ppg. Senior Matt Petracek will take the majority of the long distance shots and is nailing the three at nearly a 40% clip this season.

(18-8) Lincoln Lutheran vs. Columbus Scotus (23-2) - Scotus defeated Lincoln Lutheran 53-41 in the Centennial Conference semis back on January 29th, then suffered through a little rough spell, losing 3 games. The Rocks lost to C-1's #1 Wahoo Neumann and a red hot Wahoo team before dropping a 61-52 decision to Adams Central in the Heartland Hoops Classic.

In that A/C loss, Cody Mroczek was held to just 3 FG attempts and it's a little concerning that in the Shamrocks 2 sub district wins, Dalton Taylor scored 22 and 18 points respectively and did not receive a ton of scoring help. It has also been reputed that the splendid all-state Taylor may be playing with a broken bone in his non shooting hand. Nonetheless, Dalton Taylor needs some scoring assistance.

Lincoln Lutheran has been playing solid defense all season and former GINW standout Jason Glines has done a superb job of coaching the Warriors.

All but one of Lutheran's losses have been to top notch competition (Neumann, Scotus, St. Cecilia, Skutt) and the Warriors avenged an earlier 15 point loss in the sub-district final by besting 20-4 Milford, 49-44. This appearance in the District final is huge for Lincoln Lutheran for the simple fact the Warriors have only been in this position once in school history, back in 2008 when they made it to the State Tournament.

This team knocked off a fine Ft. Calhoun (18-6) team 40-34 in the sub-district finals. Moxness, along with senior Darnell Sims each had 15 in the win and do not discount the fact the 6'5 Moxness can hit from beyond the arc.

Meanwhile, Bishop Neumann may just have the best front court in the entire state in senior Ben Simons, his junior brother Jaxon Simons, plus junior Noah Vedral, a Division one Quarterback prospect in football. The Cavaliers only loss was to Class B power Aurora in the Heartland Hoops Classic on a last second slam by Austin Allen.

Neumann will run Logan View/SS to death if they want to get into a fast paced game and I think Coach Forbes will want to avoid that scene. Wahoo Neumann my choice to win the C-1 crown.

The Eagles boast 6'-6 St. Mary's transfer, Tyler Regan, who has been money in the bank for O'Neill this winter. Regan, Jake Young and Justin Appleby are known as the Cash Brothers for O'Neill and their stats prove it. Money in the bank, baby.

Regan leads the way with his 13.4 ppg and 7.3 rebounds an outing. His sophomore teammate, Justin Appleby adds 11.9 ppg, while junior Jake Young, the 3rd "Cash" bro, chips in nearly 11 a game. And lest we not forget floor general Tyler Hostert, who has been on the floor for the Eagles since his freshman season.

Anyone facing veteran Pierce coach Mike Emory, knows defense is the Bluejays calling card. Only two teams have scored 50 on Pierce this season........TWO. Defending C-1 champion Winnebago hit half a hundred when they beat the Bluejays 51-39 in the semis of the Shootout on the Elkhorn right before New Year's Eve, and Norfolk Catholic scored late in a 75-58 loss to Pierce on January 9th.

Seniors Brady Starkel and Taggart Bailey lead the scoring parade for Pierce and are nifty shooters from beyond the arc too. Add Austin Freeman and Mason Buckendahl, and you have a heck of a basketball team that is also deadly from the charity stripe. GICC type DEFENSE is still the ticket to Lincoln for the Bluejays and they perform it well.

(13-12) Grand Island Central Catholic vs Adams Central (22-4) - GICC advanced to the District final with a shocking 43-40 win over a much taller and more physical 16-7 Boone Central/NG team. Adams Central won the rubber match over Kearney Catholic with a grind-it-out 50-39 victory over the Stars to arrive here.

I swear to the heavens, Coach Zac Foster's Patriots launch more three point attempts than any team in the entire state of Nebraska. A/C made a believer out of me when they beat Columbus Scotus by 9 in the Heartland Hoops Classic. The knock that Adams Central plays a weak schedule and are not physical is not true. The Patriots schedule included Aurora, Bennington, GINW, all Class B schools.

And if you think the Patriots can't play physical, think again. The biggest knock was on junior David Bohlen, who is a non-footballer, but tougher than nails. Bohlen is as deadly from beyond the arc and is absolute money from the charity stripe and plays great defense. Add in tremendously crisp ball movement and nice scoring from Kyler Wormstadt, Garrett Sittner and Luke Goldenstein, you have a very good basketball team, as witnessed by their #2 rating in C-1.

How about this youth movement on Tino Martinez and his GICC team? Not one senior in the bunch but Ryan Bernal, and maybe the shortest team in captivity that plays ferocious, in-your-face defense that frustrates opponents into mistakes.

One thing to remember about the Crusaders......DO NOT let this team score 40 points. Central Catholic is 12-0 when they surpass the 40 point mark. ONLY ONE player averages double figures for GICC and that would be sophomore Mayra Almyra, who is a big time undersized low post player at 6'2. The high leaping Almyra averages just barely over 10 ppg.

Another player that has blossomed this winter for the Crusaders is cool-headed freshman, Jack Goering. The 5-10, 140 pound Goering, who looks like a middle schooler, buried 19 big ones in the win over Boone Central/Newman Grove and is the Crusaders #1 ball handler. Junior Aidan Anspauch, whose parents were both coaches, can also score and rebound despite his 6 foot frame. Anspauch exploded for 28 points against Lexington back in early in January.

Key to this game will be GICC's ability to break the Adams Central trap, which was a key to the Partriots 41-31 win over the Crusaders back on January 23rd. The key for Zac Foster's A/C squad? Prevent GICC from reaching the 40 point mark.

(20-7) Gothenburg vs Gordon-Rushville (18-5) - Joel Nelson's Gordon-Rushville boys made it to the District final by avenging a couple of earlier losses to Chadron.....and they weren't that close either. But in that final last Thursday, Mustang dandy Ryan Schwarting nailed 5 of his 12 three point attempts enroute to his 19 points in G/R's 42-39 overtime victory over Chadron.

Schwarting leads the way in scoring for the Gordon-Rushville, averaging nearly 16 ppg this season and has been held under double figures only 3 times this winter. Jared Nelson, a slick sophomore guard, adds 11.6 ppg for Gordon-Rushville, which scores at a 56 ppg clip.

Besides the two Chadron losses, Gordon-Rushville's only other setbacks were to Class B Alliance (twice) and C-2 power Ainsworth.

The Swedes from Gothenburg are the real deal, man. It took a buzzer beater three shot by Winnebago's D'Von LaPointe with 2.9 seconds left to beat this bunch in the Heartland Hoops Classic. The impressive thing was Gothenburg's ability to recover from deficits of 33-19 (1st quarter) and 49-31 (halftime) to come within 80-78 of the then 24-0 Indians.

The Swedes, who nearly knocked off GICC in the District final a year ago at Kearney High, are led by one of the state's top scorers in junior sharpshooter, Dawson Graham. Graham scores at a 20.3 ppg clip and can hit the outside shot as well as the shots inside the arc.

Graham is nailing his 2's at a 56% clip this season and cannot be left unguarded. Gothenburg also has a force in the paint with 6'7 junior Ty Clement, who averages 12.3 a game. Yet another junior, Collin Hahn, contributes 10.7 ppg and can also nail the trey.

DO NOT let The Burg's 7 losses fool you. The only mysterious setback was to crafty David Oman's Centura squad (70-62 in OT). That was Gothenburg's 3rd game in a week and can honestly be thrown out for the simple fact the Swedes other losses came at the hands of Class B teams Gering and Hastings, C-2 power Ainsworth (twice) and another C-2 power, Southern Valley (21-3).

The Swedes also were impressive in defeating Ogallala for a third time this season in the C1-12 sub-district final, 61-38.

As far as the C-1 Wild Card standings are concerned, here is the current situation entering these District finals. Two teams from this list will be added to fill the 8 team Class C-1 State Tournament field.