This year's Heartland Hoops Classic may be the best yet. 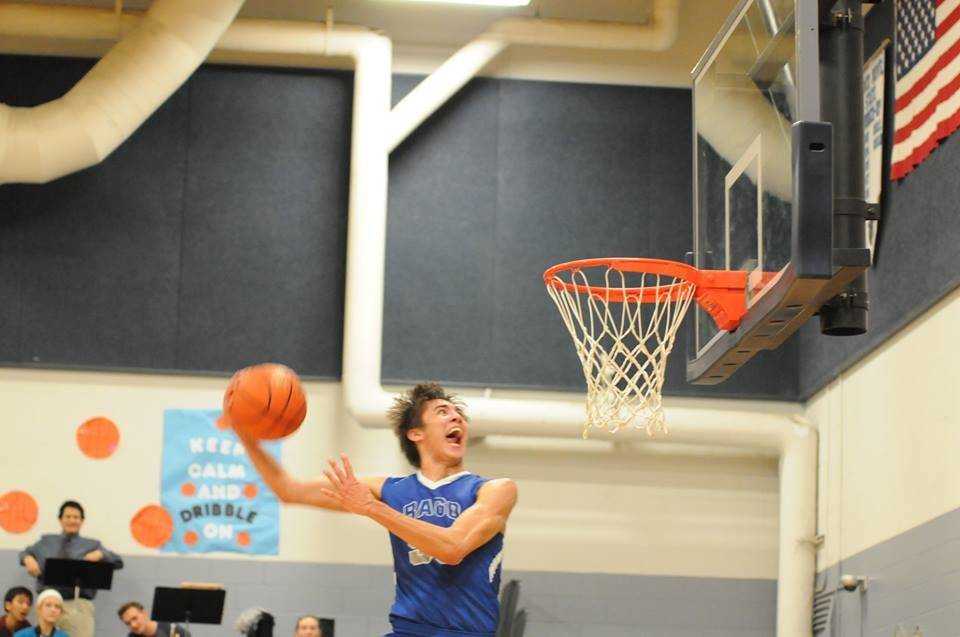 Winnebago's 6-7 David Wingett (#50) prepares to execute another power dunk. The junior Bago ace will take your breath away when you see him perform on the hardwood.

This year's Heartland Hoops Classic may be the best yet.

Check out the lineup of teams for this year's Heartland Hoops Classic, which will be showcased tomorrow (Saturday) at the Heartland Events Center in Grand Island.

Among the 16 teams to play Saturday, there are Three #1's, Three #2's, Four #3's and a total of 13 teams currently rated in Nebraska or Colorado. And with a State Tournament type atmosphere like the Heartland Events Center offers, it promises to be a day of high school basketball that cannot be matched anywhere.

Here is a look at the 8 games to be contested this Saturday. Oh, and by the way, thank you Tino Martinez, for making this 9th Annual Heartland Hoops Classic possible.

9:00 AM - BDS (18-2) vs. Amherst (20-0) - What a way to open up this splendid day of basketball. BDS has lost only to unbeaten Humphrey St. Francis and once beaten High Plains, and will get a chance to avenge that High Plains loss tonight at home.

What a contrast in styles this game will present. Amherst will run the legs off you and BDS is about a patient as a Bill Gavers GICC or Jim Weeks Beatrice team out of the past.

Kale Kleinschmidt and Riley Tegtmeier lead a very balanced BDS attack that has come up huge in big games......like the D-1 Football finals a few months back. The Storm won that baby with a 44-30 win over Burwell that day. Veteran players like Ben Christensen, Stuart Rohr and Ben Elznic make this group a tough draw for anybody.

10:45 AM - Riverside (17-2) vs. Clearwater-Orchard (14-7) - Another great matchup you normally would not see during the regular season. Both of Riverside's blemishes have been to unbeaten Humphrey St. Francis. The Chargers are led by super coach Joey Imus and have 6-5, 215 pound Tanner Hudson, who led the entire state in scoring a season ago. Hudson, who is deadly from beyond the arc, is averaging 20.5 ppg and pulls down 7.4 boards a contest this season. Hudson needs just 4 more points to reach the 1000 point career milestone. Junior Noah Valasek is popping in 15.2 a game to add some added scoring punch for the Riverside school, who is comprised of Spalding High and Cedar Rapids.

Don't let Clearwater-Orchards record fool you. This is a very good basketball team led by a terrific female basketball coach in Shelly Mlnarik, and one of the best big men in the entire state in 6-7, 235 pound Augustana commit Andy Kerkman. The two time all-state football and basketball star is averaging a double-double every time he laces up the shoes.

Kerkman is dumping in 21 points a contest, while pulling down 14.6 rebounds a game. The past 3 seasons, Andy has scored 1,361 points and probably could have landed a football scholarship if he had chosen that route. 5-10 senior Jagger Smith adds 13.6 ppg for the Cardinals. Clearwater-Orchards losses have been to unbeaten St. Francis, twice to 16-6 Neligh-Oakdale, twice to 16-7 West Holt, and to 15-7 Niobrara-Verdigre and 12-6 Osmond. No shame there and besides, the Cardinals are playing in C-2.

By the way, Kerkman and Riverside's Tanner Hudson were teammates last summer on an AAU team, the Omaha Sports Academy and are good buds.

12:30 PM - Gothenburg (16-5) vs. Winnebago (24-0) - Let's face it, lots of fans will make the trip just to see Winnebago star David Wingett. The 6-7 junior, drawing Division 1 attention, already has 664 points this season (28.9 ppg) and will dunk the basketball anytime he gets the opportunity. The Indians are defending Class C-1 state champions and are about as exciting as it gets for a Nebraska high school basketball team. Their play resembles a little Harlem Globetrotter style at times. The entire state learned that this bunch could play with and beat anybody in Class C-1 a year ago and could probably have beaten most Class B schools.

And if you think 'Bago is a one man team.....think again. The Indians have 3 other players that score in double figures, including Class A South Sioux City transfer, senior Aspen LaPointe (11.7), his sophomore little bro, David LaPointe (10.4) and junior Drake Gorrin (10.5).

Meanwhile Gothenburg, C-1's #9 rated team, boasts sharpshooter Dawson Graham. The 6-2 junior is averaging 20 points and outing and exploded for 35 points just 12 days ago against a very fine Ainsworth team. Graham nailed 8 treys in that 63-52 loss. The Swedes also have a dandy post player in 6-7 Ty Clement (12.5) and 6-2 junior Collin Hahn, who is averaging 10.9 an outing.

Seward is led by senior guard Brevin Sloup, who became the Bluejay's all-time scoring leader after he burned Falls City for 35 last Friday. The 5-10 senior now has 1,089 points after that win. Seward boasts wins over good York and Wahoo teams this season.

After suffering huge graduation losses from their 3rd place finish at the C-1 state tournament a year ago, the Crusaders are setting up their young players with some valuable experience for next season. Coach Tino Martinez forces have also beaten a good York squad and have wins over a surging Kearney Catholic team (15-7), Fillmore Central (17-3), and were in the game until the 4th quarter against Columbus Scotus and Adams Central.

This game may very well be the most evenly matched contest of the day. I smell overtime here.

4:00 PM - Columbus Scotus (18-2) vs. Adams Central (16-4) - Class C-1 #2 Scotus against C-1 #3 Adams Central. You can't ask for a better matchup than this. I do not recall these teams ever meeting on the hardwood and given the fact both teams are blessed with outstanding junior classes, this baby should be a barnburner.

Scotus, the runner-up to Winnebago in last year's C-1 state tournament, is led by junior Dalton Taylor, while A/C is paced by junior David Bohlin, a deadly 3 point shooting artist. Both squads are far from being a one-man show, and can get up and down the court in a rush.

The Patriots will shoot a gazillion shots from beyond the arc, while the 'Rocks will work a little more for a good shot, although Taylor and classmate Cody Mroczek can nail it from 3 point land. Adams Central needs to prove it can play with the elite in Class C-1 before it can be considered a serious contender in that class if it should make to the state tournament. This is a perfect opportunity for Zach Foster's team to prove that it can play with the big boys.

5:45 PM - Hastings St. Cecilia (16-4) vs. Sidney (20-1) - You want to see two physical basketball teams go at it, stay for this baby. Sidney's only loss to Scottsbluff was avenged last Saturday when they beat the 'Cats 43-41. St. Cecilia has two losses to Columbus Scotus, one to Class B power Beatrice, while the other was to C-1's #1 Wahoo Neumann, a loss they avenged in the Centennial Conference semifinal. The defending C-2 state champions are suring right now, as are the Red Raiders.

Both teams play in your face, suffocating defense but have definite firepower on the offensive side.

Sidney, a Class B finalist a year ago, is led by all-state Tyler Winholtz, a 6-4 senior, 6-3 senior Cutter O'Connell, and football rugged Jake Heeren, a 6-4 senior that just simply casts an imposing shadow when he steps on the court. The Red Raiders also have 6-6 junior Zach Means and 5-9 senior Brady Radcliff, a sharpshooter whose buzzer beating trey sunk Gering last Friday.

Meanwhile, with the Bluehawks, it's pick your poison. Kevin Asher has his son Brooks Asher, senior classmates Dayton Sealey, 6-6 Zach Kitten, 6-4 Derek Boyd and Seth Kirkegaard, who can all kill you from all points on the half court side. The go-to man when the game is on the line for St. Cecilia? Once again, pick your poison.

Strap on those seat belts tight for this battle.

7:30 PM - Wahoo Neumann (17-1) vs. Aurora (18-1) - This game could be the be the fastest paced contest of the day. Both teams love to push the pace and nobody does it better than Bishop Neumann. The Cavaliers may have the best front court trio in the state below Class A, and possibly the finest in any class.

Aurora has one of the state's best bigs in junior Austin Allen. The 6-9 post player will hurt you with his moves to the hoop and defensive boards, while junior floor general Tommy Leininger, the 6 footer whose father Tom is the head coach, is a driver and a superior ball distributor. Junior Cade Moural proved he can bury the trey in the Central Conference Tournament and the Huskies passing game is about as swift and crisp as it gets in Class B, often times catching opposing teams in the dust attempting to guard their man.

The question that just keeps lingering in my mind is this. Does Aurora want to get into a running contest with Neumann? While not pretending to play basketball expert here, I'm wondering if it would be the best game plan to try and run with Class C-1's top rated Cavaliers? This team just ripped a terrific Columbus Scotus to shreds, 75-42 last Friday and ran the Rocks to death that night. We'll soon find out if the Huskies pursue this game plan.

Regardless, this is a premier matchup you would never see anywhere else but in the Heartland Hoops Classic. The only word for this matchup is......Sweet.

All three of Overland's losses are to Colorado teams, but the Trailblazers have a trophy in their case that just sparkles like a rare diamond. Overland went to Las Vegas in mid December and won the the Tarkanian Classic while competing in the Platinum Division, the largest grouping in the prestigious get-together.

The Trailblazers beat 4 of the nation's better prep basketball teams to nab that crown. Overland's wins came over Long Beach Poly, Ft. Lauderdale (Fla) Dillard, South Jordan (Utah) Bingham and Las Vegas Bishop Gorman, the host school. Go ahead and google those four schools and be sitting down when you see their histories and rap sheets.

Meanwhile, Omaha South comes in undefeated with Nebraska recruit Aguek Arop (6-5, Jr.) leading the charge. Arop, who signed with the Huskers as a freshman, is averaging 16 points and outing with 7 boards a game. Just a year ago in the Hoops Classic, Omaha South led the might Oak Hill Academy 47-46 after three quarters before falling 59-54. And let's be honest, Packers head coach Bruce Chubick has, and still remains, one of the best in the business.

The Heartland Hoops Classic tickets are for all day and are $16 for adults, $8 for students, and $75 for floor/courtside seats. Tickets are available at the door, the Events Center ticket office, or through Ticketmaster.com.