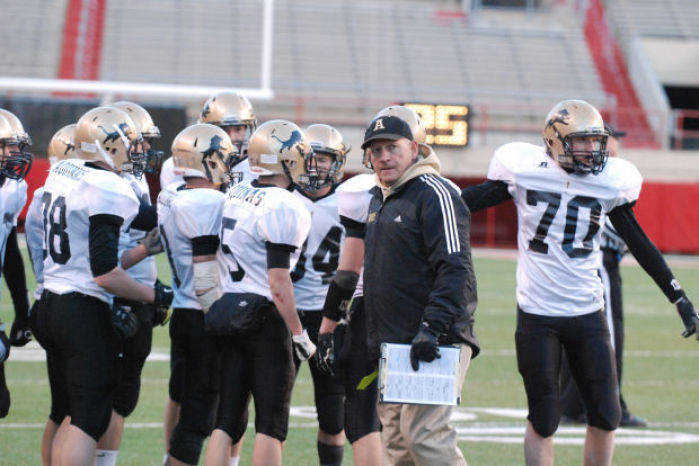 Defending C-2 State Champion David City Aquinas left left little doubt who was going to win this semifinal matchup with unbeaten Hastings St. Cecilia. The Monarchs took the opening drive 68 yards in 6 plays to post a 7-0 lead. Noah Pelan scored his first of 4 touchdowns on the night when he swept 6 yards for the score. Aquinas even survived 3 motion penalties on the drive.

The well-oiled Aquinas ground game was in high gear, scoring on of 5 of their 6 first half possessions to go up 36-7 at the half. By the halftime break, both FB Lane Napier and wingback Noah Pelan had 121 yards rushing. Conner Kranda, the other Monarch WB, added 80 yards on the ground.

It was a long night St. Cecilia, who had lost 1000 yard rusher Hunter Fischer a week ago. The Bluehawks other back, Dayton Sealey played, but was swarmed under by the relentless Aquinas defense every time he touched the football. The swift Sealey could muster only 14 yards on 6 carries for the night.

The St. Cecilia offense was also marred by what seemed like countless motion and offside penalties.

Aquinas zoomed out to a 21-0 1st quarter lead with Lane Napier scoring on a 1 yard blast, and the jitterbugging Noah Pelan adding his 2nd score on a zig-zag, no- wasted-yards, 27 yard touchdown run. And the Monarch offensive line? Just business as usual, clearing holes and blocking downfield. A sight to see for those who appreciate what goes on in the trenches.

David City Aquinas tacked 2 more TDs on the board in the 2nd stanza. Noah Pelan repeated his weaving, sharp cuts, touchdown with 6:44 left in the 2nd quarter. Several defenders had a shot at Pelan, but the 5-8, 168 pound senior hit paydirt from 30 yards away, making the score 28-0.

St. Cecilia did infuse a little life in the home Bluehawk fans on the ensuing drive when QB Grant Schmidt floated short pass to 175 pound junior Zach Glass, who then took advantage of a missed tackle, and a Monarch defender who had slipped on the wet turf. Glass flashed some speed, motoring 79 yards for a Bluehawk score with 4:20 left in the half.

Aquinas, who seemed disappointed by the long TD pass, stormed right back on the following possession, going 58 yards on just 4 plays. The drive took a miniscule 1:08 and concluded with Pelan's 5 yard touchdown run, his 4th of the half.

The Monarchs held St. Cecilia to a 3 and out to begin the 3rd quarter, then promptly scored on a drive that took all of a minute. Conner Kranda scored his 2nd TD of the evening on pretty 8 yard run, making it Aquinas 44-7, kick starting the running clock with 9:21 left in the 3rd.

The Aquinas subs got into the act before the 3rd quarter came to a close when 5-4, 123 pound Matt Nadrchal scooted around his left side, tightroping the Bluehawk sideline for a bit, for a 40 yard touchdown dash. Place kicker Nolan Helgoth booted his 5th PAT of the night to give his team a 51-7 lead, a margin that would not change.

Even powerhouses like Cambridge under Danny Keezer couldn't even match Aquinas feat. Nor could teams like the Norfolk Catholic, who made 4 straight C-1 championship apperances between 2009-2012 under Jeff Bellar. Ditto for the great Grant teams of the 70's and 80's and Chuck Mizerski's Lincoln Southeast football powers back in the Class A day.

It's a Big Deal friends, and the cool thing is that may be somewhat expected these days from Head Coach Rom Mimick, defensive coordinator Tony Smith and assistants Ken Pelan, Matt Mimick, Dan Mettler, Marv Pelan, Jason Lavicky, and Jack Klosterman. Just the way they do it down there, man. I would give anything to carry the ball one for time, following that Monarch line.

......Footnote: It is customary for me to go back through my blogs and update the stats to "official" stats as recorded by the winning school. When doing so this morning, I discovered that Conner Kranda scored the Monarchs 1st touchdown and not Noah Pelan.

This brings up an interesting point that was being discussed with both Aquinas and St. Cecilia coaches and stat people during last nights game. Stat people can be off a bit when it comes to rushing, receiving, and passing yardage, not more than 4 yards is usually acceptable among those who do it right. But when it comes to what player scores a touchdown, you should always have that correct.

I brought up the point that I am rarely fooled when it comes to who carried the football on a rushing play, but one team that has confused me more than a few times is Aquinas. That is a tribute to Ron Mimick and his insistence that these handoff repetitions and play fakes become so deceptive that even a stat person can be fooled.

If I was confused as to who carried the football for this Monarch offense, think about how confusing it looks to a linebacker on the other side of the ball. That's why Aquinas football is tops year in and year out.