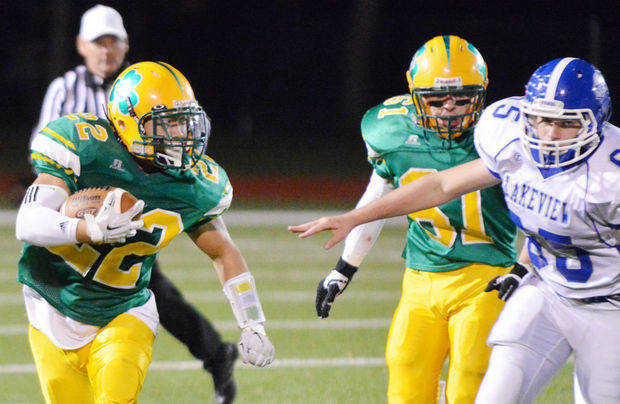 When I put together Part I, I was truly amazed how many players surfaced to come through in clutch situations. These were young men that had not played a ton of minutes prior to being thrust into key situations. The uniform thing I found out was that every single one of these newborn heroes came from programs headed by great coaches. Head men that simply had his players so well prepared that when the time came, if and when, those players would be ready for that moment in time. Great coaches do that, you know.

Now I present to you, Part II.

AJ Jenkins- Wilcox-Hildreth - Added some history in the Falcons 47-18 playoff loss to St. Edward in the opening round of the 6-Man football playoffs. Jenkins ran 24 times for 214 yards in the loss, raising his season total to 1,297 yards with 22 TDs. The actual history was made the week before against Maywood/Hayes Center when AJ rushed 42 times for 394 yards and 6 touchdowns. You see, AJ Jenkins is only a FRESHMAN. In fact, AJ is only the 7th FRESHMAN in history to rush for over a 1000 yards in a season. Here are the others:

Let us not forget the boys up front that clear the way for this freshman. Triston Farley, who also rushed for 810 yards and caught passes for another 267. Parker Sturgis, Jackson Vanlangingham, and fullback, Jason Campbell.

*Logan Duryee- Omaha Westside - Papillion LV had the state's leading rusher bottled up pretty well in the first half, limiting Duryee to 49 yards. With the Warriors trailing at halftime, Coach Brett Froendt made some adjustments and Mr. Duryee ripped off 124 yards and a couple of touchdowns and the rest is history in Westside's 28-27 thriller over Papio. Logan ended the night with 162 yards on 26 carries and 3 TDs (3,4,1 yards runs), swelling his season rushing total to an even steven 1,600 yards.

The Warriors (8-2) will meet a rapidly improving and healthier Omaha North team Friday in the Class A quarterfinals. Westside beat Omaha North a couple of weeks back, 42-28.

*Gavin Buschkoetter- Lawrence-Nelson - Tough as nails junior rambled for 195 yards on 27 carries to propel the Raiders to a 38-22 victory over Lyons-Decatur NE last Thursday afternoon. After being relatively quiet on offense in an 8-8 first half, Buschkoetter shook things up in a hurry early in the third quarter. Lawrence-Nelson had just held Lyons-Decatur NE on their 4 yard line when the Raider junior exploded. Gavin rushed into the middle of the line on a simple iso play, drug some bodies about 4 yards, appeared to be stopped, then shot out the pile like a cannon, zooming 76 yards for a touchdown. The play reminded me of Tommy Frazier's stunning run against Florida in the National Championship.

Not sure how many yards Buschkoetter has to date because head coach Brian Blevins seems to never publish stats (which is OK), but I can tell you this Lawrence-Nelson football team is very, very sound fundamentally and makes few mistakes. The Raiders will be on the road Wednesday to face 8-1 Wynot. Lawrence-Nelson probably left this afternoon to make that baby by game time on Wednesday (2:00).

*Jaydn Kowalski- Bellevue West - 6-4, 210 pound senior sharpshooter was good on 15 of his 23 passes for 273 yards and 3 scores in the Thunderbirds 55-7 throttling of Lincoln North Star. Kowalski hit Trystn Ducker with TD passes covering 23 and 27 yards in the win, while also connecting with junior Chris Finn on a 63 yard touchdown. Jaydn also hit paydirt on a 13 yard run in the easy 1st Round win.

*Omaha Skutt Defense- These gentlemen are just downright mean, man. Waverly found that out in their 1st Round playoff loss (50-3) to the Skyhawks. These dudes held Waverly to 41 total yards for the entire game. Skutt is giving up around 155 yards a game on the defensive side of the ball this season, a good 30 yards better than anyone else in Class B. It just isn't advisable to run up the gut with 6-3, 265 pound Trent Hixson there. If you slip by him an inch, 6-2, 230 pound Christian Peters will have you for a snack. Big 6-7 Nick Bouda had a sack for a safety in that Waverly game too. And the Skyhawk secondary is very capable also.

Matt Turman just simply knows how to teach the game folks. Skutt gets a rematch with Lincoln Pius X Friday in a quarterfinal game in Lincoln (7:00) The Skyhawks won a 31-24 three overtime thriller earlier in October.

*Logan Bunger- McCook - Both of his receptions went for touchdowns of 23 and 6 yards in the Bisons 14-8 playoff win over Beatrice. Bunger is the tight end on offense and in light of this game, defenses had better keep an eye on #89. Bunger is also a dependable long snapper on punts and is a valuable cog in the Jeff Gross football machine. McCook will hit the road in the quarterfinal round of Class B Friday, making the long journey to face unbeaten Plattsmouth. Game time is 6 bells.

*Emmitt Knight- Gretna - The Knight Rider was a shining star in the Dragons 42-28 win over visiting Scottsbluff. Knight rushed for 146 yards on 22 carries against the Bearcats and scored five touchdowns in the playoff victory. Emmitt scored from 7, 5, and 8 yards out in the first half, staking Gretna to a 28-14 lead. Knight added scoring runs of 16 and 22 yards in the critical 4th stanza. The rushing yardage raised the 186 pound senior's stats to 1,353 yards with 22 touchdowns this season.

Gretna will travel to unbeaten Aurora Friday in a 7:00 matchup that is about as good as it gets in Class B.

*Gabe Haney- Hyannis - Gabe 'da horse" Haney galloped for 292 yards on 22 carries, scoring five touchdowns in the Longhorns 59-24 win over Arthur County in the opening round (quarterfinals) of the 6-Man playoffs. In only 7 and a half games, Gabe has exploded for a State leading 2,164 yards, 39 TDs and a mind-boggling 18 yard a carry average. Hyannis will host St. Edward in a Friday semifinal game scheduled for 2:00 MST. Winner advances to UNK for the 6-Man State Final to be played Friday, November 13th.

*Columbus Scotus Ground Attack - Riddled O'Neill for 439 rushing yards on a rainy night 62-14 playoff win at Pawnee Park last Friday. Baeley Pelster, who surpassed the 1000 yard plateau mark against Lakeview in the regular season finale, ran for 106 yards on 9 carries and scored 3 times in the first half (60, 3, 22 Runs). Cole Harrington actually led the ground attack with 129 yards on just 8 touches. Cole also scored on a 36 yard run and booted 5 PATS. Marcus Dodson added 60 yards, and Jake "The Boss" Boz chipped in 53 in the blowout. The Scotus defense wasn't bad either, holding the Eagles to just 13 yards rushing for the entire contest. The 'Rocks also recovered 3 O'Neill fumbles. Evan Chohon, Tate VunCannon, and Josh Hergott got in on the fun there.

Scotus will face Ashland-Greenwood Friday in that huge C-1 quarterfinal game. A win against the Bluejays would be somewhat of a milestone for the Rocks. Scotus has not advanced past the second round of the playoffs since 1994 when they bested Gretna and Norfolk Catholic before losing to Aquinas.

*Trey Taubenheim- Amherst - Connected on 13 of 18 passes for 276 yards and 5 touchdowns in the Broncos 65-8 win over Sutherland. The All-State sharpshooter has now thrown for 2,330 yards and 42 touchdowns this season with only three interceptions. That puts Taubenheim at 4,790 yards for his career with 89 TDs and only 9 INTS. Impressive? Ya Think?

Amherst will head North to Litchfield on Wednesday to face a vastly improved Ansley-Litchfield squad (5-4). My friend, Brad Kjar has taken the reins up there and has fashioned a terrific football team. Game time in Litchfield is set for 7:00. We'll be there.

*Garrett Allemang and Grant White- Neligh-Oakdale - This dynamic duo was absolutely too much too handle for Pender last Thursday. In the Warriors 75-32 spanking of the Pendragons, Allemang rushed for 144 yards on 17 carries, and 5 TDs. Garrett also caught 7 passes for 119 yards and 3 more scores. That's 8 touchdowns, friends and that ties the Class D-1 record for TDs in a single game. For good measure, Garrett made 12 tackles on defense, with 2 going for losses. Meanwhile, White completed 16 of his 25 throws for 291 yards and 5 TDs.

Neligh-Oakdale (7-2) will face a stern test in the quarterfinals when they travel to Bruning to meet powerful (9-0) BDS, a 52-22 winner over Cross County. Kickoff is slated for 5:00 PM.

*Logan Hoyt- Plattsmouth - This hulk is one of the reasons Plattsmouth is undefeated. Check out the stats on this 6-1, 270 pound lineman and these are not misprints. This kid bench presses 360 pounds, and Squats 690! Yeah. His deadlift is 560. Thus far in 2015, Hoyt has made 44 tackles, 12 of which are for losses. He also has 3.5 sacks. On offense, he simply plows his man into the ground or knocks him off his feet and moves on to the next victim. It's actually funny to watch him on film road grading over people, or better yet in person, however, the guys that get pancaked or tackled probably find very little humor in the entire deal.

*Rayce Riecken-Ashland-Greenwood - Riecken is a little dude and I'm thinking his value may be overlooked by teams who haven't seen Rayce play. Not sure if Riecken weighs more than 140 pounds, but number 7 has pirated eight passes this season, returning 2 of them for TDs. He's made 35 stops from that cornerback position on defense too.. Just another cog in that Bluejay machine.

Trystn Ducker- Bellevue West - Actually eclipsed the 1000 yard mark with his 6 receptions for 93 yards in the Thunderbirds 55-7 playoff win vs. Lincoln North Star. Trystn's receiving total is currently at 1,030 yards. If you throw in Ducker's punt and kick return yardage, his total offense for the 2015 season stands at 1,317 yards. The lightning fast wide receiver also has 18 tackles on defense and is just waiting to take one of those punt or kick returns to the house in the playoffs. The state's top receiver.

*Edhel Escandon- Gibbon - 5-4, 120 pound sophomore booted a 23 yard field goal early in the Bridgeport playoff game just when the Buffaloes needed the points the most. Escandon was also a perfect 4 of 4 in his PAT attempts in the rainy game. The past 2 games, Edhel has true on 10 of 11 extra point tries and is 1 for 1 in field goal attempts. Valuable weapon for Mark McLaughlin's troops.