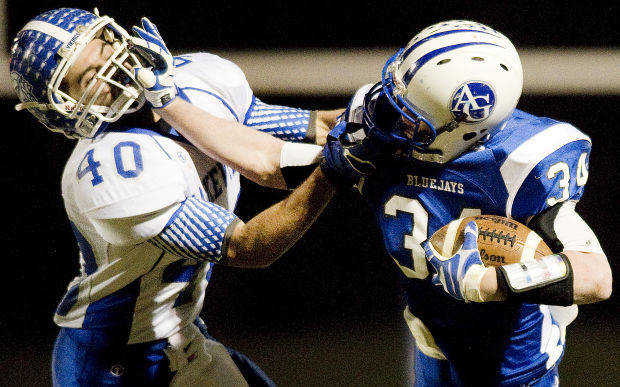 Second wave of Friday Night Heroes is coming right at you. These guys were Good.

*Trevor Nichelson-Ashland-Greenwood - Getting tired of seeing this name? Think of how Ashland-Greenwood's 9 opponents feel, and they knew Trevor was going get the ball. In the regular season finale, 62-13 win over Douglas County West, Nichelson was given the ball only 11 times, but the sensational junior still rushed for 224 yards and 5 touchdowns. And Trevor's TD runs rarely come from close in. Friday's TD trips came from 24, 29, 48, 32, and 58 yards out. The rushing explosion places Nichelson at the #1 spot in rushing yards in Nebraska, with 1,962 big ones and 25 TDs. The elusive junior also sports a 9.9 per carry average, incredible for Class C-1. Nichelson has also made 82 tackles on defense.

It's dizzying to think that Trevor Nichelson has rushed for 4,382 yards in his career and his junior year playoff season hasn't even begun. Is it also mind blowing to think this young man could reach the coveted 5,000 yard career rushing plateau before he gets to his senior season?

*Colby Ensz-Tri-County - Here we go again, and when it really counted. The junior sensation ran for 209 yards on 26 touches and hit the end zone with 12 and 64 yard runs in Tri-County's big 14-0 win over Centennial. That lands the Trojans in the C-2 playoffs for the first time since 2012. This is an extra sweet deal for Tri-County because this team started the season with three losses, then bounced back with 6 straight wins to finish 2015 with a 6-3 mark. Ya think Colby Ensz wasn't a key player in this run? Check this out.

The 160 pound junior carried the ball 38 times for a whopping 99 yards in those three losses, 2.6 yards a tote and one touchdown........ONE. For the life of me, I couldn't tell you what transpired between week 3 and week 4, but Colby ripped of 272 yards on 23 carries against Freeman that 4th week and scored 5 TDs. The blitz has never stopped. The last 6 games of the regular season, the amazing Ensz has bolted for an unheard of 1,668 yards and 20 touchdowns. Mind boggling. The Trojans will travel to Hastings to meet the always powerful St. Cecilia Bluehawks (9-0) in a 7:00 Class C-2 first round game at historic Duncan Field.

*Zane Heckenlively-Falls City - The Tigers crushed Conestoga 55-19 in a tuneup for the playoffs last Friday and Heckenlively had a ball. The 5-9, 170 pound senior ran for 193 yards on 16 carries and scored from seemingly everywhere on the football field. Heckenlively reached the end zone with TD runs of 21, and 18 yards, returned a punt 56 yards for another, and blocked a Conestoga punt, taking it back 67 yards for yet another score.

Those rushing yards put Zane at 1,451 yards for the year, plus 23 touchdowns. Falls City will face a stiff First Round playoff road challenge when they take a trip to Norfolk Catholic (9-0) Friday. Game time is 2:00 at Veteran's Memorial Field in Norfolk.

*Omaha Central Rushing Offense - Wow! Who lays 362 rushing yards on Bellevue West? Not only that, but five ball carries contributed to the blitz at an 8.2 yards a clip. The Eagles offense outgained the Thunderbirds 521 to 489 Friday night in the battle of the unbeatens. Yes, Central lost the battle on the scoreboard 41-25, but not many teams have dented Bellevue West for that many yards on the ground. James Jackson led the way with 127 yards on only 9 carries. That's 14 yards a touch. Austin Robinson followed with 95 yards on 8 totes and the average there is 12/carry. Tay Sanderson added 71 yards, QB Jordan Flowers chipped in 35, and Corbin Foster had 34.

So, what does this tell us? For one thing, it tells me Omaha Central rushed for a hundred yards + over their per game rushing average (245/game) against the top ranked team in the state. That team, Bellevue West, normally doesn't give up that many. The Eagles have the top rated defense in Class A, so that kind of ground game against a team like Bell West indicates Omaha Central just may be more of a major player in the upcoming Class A playoffs.

However, one certainty remains. Can anybody outscore the Thunderbirds? All in all though, I think Omaha Central's playoff chances may have just improved with that Bellevue West rushing performance.

*Tanner Crosley-Crofton - 6-1, 190 back rushed for 187 yards and 3 touchdowns (3,23,9 Runs) in the Warriors 34-13 regular season finale win against Atkinson West Holt. That puts Crosley at 1,234 yards and 22 TDs for the season. One thing opponents know, and have for ions, is that Crofton is going to run the ball down your throats, passing only about 8 times a contest. The Warriors double wing formation may be the tightest I have seen in years. Looks like a gigantic rugby scrum rolling over defenses like a 1,600 pound bowling ball.

The 7-2 Warriors draw the #10 seed right above St. Cecilia and will travel to 7th

*Cody Feist-Yutan - Benny The Jet, baby! Ran all over Omaha Brownell-Talbot's defense to the tune of 253 yards on 27 carries and 3 touchdowns. The Jet raised his rocket-fueled season rushing total to 1,560 yards with 30 TDs. Feist also reached the 3,000 yard Career rushing mark in the win (3,029). The Rocket Man has also made 73 stops this season, and 56 of those were solo tackles. As stated above, Yutan will play Crofton at 5:00 Friday in that 1st Round Playoff contest.

*Jake "The Boss Man" Bos-Columbus Scotus - The Boss Man was kind of a pain in the neck to cross-town rival Columbus Lakeview. Bos carried the ball only 15 times but every third one went for a score. Jake hit the end zone from 3, 4, 3, 1, and 34 yards away. The Boss man also sacked Viking quarterback Dylan Johnson for a Scotus safety in the Rocks 42-18 win. Scotus garners the #1 seed in the Class C-1 playoffs and open with 6-3 O'Neill on Friday at Pawnee Park in Columbus in with kickoff set for 7 PM.

*Baeley Pelster-Columbus Scotus - The most exciting runner in C-1 football blasted for 175 yards on 16 carries in that Lakeview win to lead all rushers. Pelster scored on a 35 yard run in the Shamrock win and should be a force in the upcoming C-1 Playoffs.

*David Englehaupt-Norfolk Catholic - Big time players come up big time in big time games, man. The Wyoming commit was a man in the Knights big 42-14 win over a very good Boone Central/Newman Grove team. Englehaupt exploded for 180 yards on just 13 carries and scored touchdowns on runs of 9 and 50 yards. David has unofficially rushed for 986 yards during the regular season, plus making an unofficial gazillion tackles. The #2 seeded Knights will host Falls City in the first round of the C-1 playoffs. It will be a 2:00 kickoff at Veterans Memorial Field.

*Bradley Bunner, Kobe Paprocki-Clarkson-Leigh - Led Clarkson-Leigh to an impressive 50-26 win over a tough Nebraska Christian team. Bunner, the junior RB, paved the way with 167 yards on 36 carries and 19 tackles. Paprocki, the quarterback, added 107 yards on 12 touches in the victory. That gives the Patriots twin 1000 yard rushers in Bunner (1,315) and Paprocki (1,100). Clarkson-Leigh will be seeded #7 in the Class D-1 East Bracket and draw #10 Diller-Odell (6-2) in a Thursday 5:00 game. The 7-1 Patriots are opposite Creighton and Fullerton in the bottom of that bracket.

*Thomas Young and Josh Demers-High Plains Community - Big Thomas Young was good on 7 of 10 passes for 107 yards and rushed for 106 more on 13 touches, while Demers dented Fullerton's defense for 127 yards on just 12 carries. High Plains dumped the Warriors 62-14 and advanced to the First Round of the D-1 Playoffs beginning Thursday. The 6th seeded Storm draws a 3-5 Howells-Dodge team that has been riddled with injuries to key players most of the year.

*Aundra Gilbert-Lincoln High - Pulled off the best game of his career in the Links 45-21 win over Omaha NW. Gilbert hauled in 5 passes from QB Anthony Evans, three of them going for touchdowns (13, 36, 12 yard receptions). Gilbert concludes the 2015 season with 432 receiving yards and 5 TDs.

......Sad Deal - For the first time in 20 years, Mark Wortman's Elkhorn Antlers will be absent from the post season playoffs in Class B. Elkhorn lost their final 4 games to teams with a combined 30-6 record. The Antlers finish the 2015 season at 4-5. The last time Elkhorn missed the playoffs was 1994, and since then have won three Class B titles, and finished runner-up three times. Wortman's lifetime coaching record stands at 316 win and only 71 losses. Only St. Cecilia's Carl Tesmer and retired Creighton Prep mentor, Tom Jaworski are in front of Wortman in career wins.