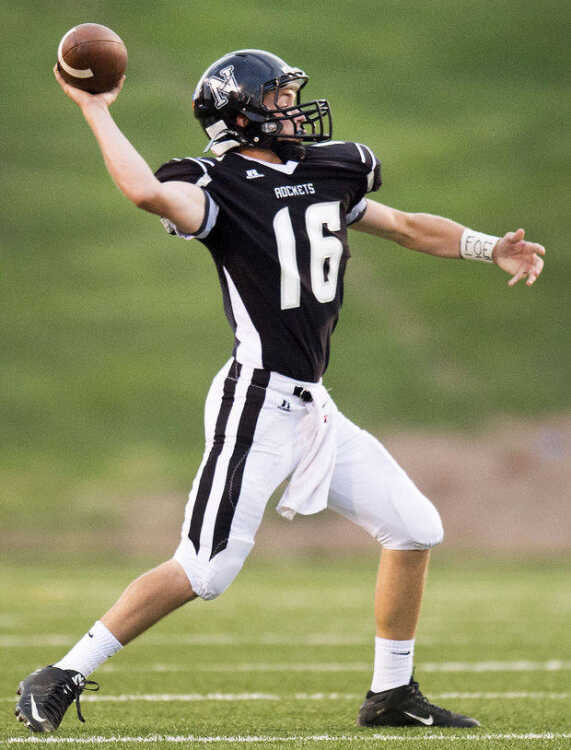 The 3rd wave of Week 7 Heroes is on the way. 1000 yard rushers are starting to surface, quarterbacks are reaching the 1000 yard passing plateau, and new faces are starting pop up. Many of those new faces may just be some of the stars during the postseason, which is right around the corner. This season is going by far too quickly. I wish it would never end.

*Zane Heckenlively-Falls City - Here is a true Friday Night Hero, friends. Heckenlively, who surpassed the 1000 yard mark last week, has Type 1 diabetes and if you know how much attention that demands, you realize what this outstanding junior RB/CB does day in and day out, just to keep himself healthy. And that means on the football field during practice and under Friday Night Lights as well. When we are feeling sorry for ourselves because our day isn't going well, think of what this young man goes through every hour of the day just to play the game. My friend Darin Fritz, Falls City's head coach and his staff have done an incredible job monitoring young Zane every step of the way.

Oh, by the way, Heckenlively made our list once again by rushing only 8 times in a 62-11 win over Johnson County Central. Zane galloped for 175 yards and scored touchdowns on runs of 57, 78, and 17 yards. For good measure, the 170 pounder returned a punt 51 yards for another TD. Zane Heckenlively has only carried the ball 115 times this fall for the Tigers, yet has managed to rush for 1,177 yards, 18 touchdowns and leads the defense with 46 tackles, 5 for losses. A true Friday Night Hero.

*Cody Ensz-Tri-County - Aw c'mon, you didn't think Cody Ensz would cool off anytime soon did you? In yet another close nail biting win for Tri County, the amazing Ensz rushed for 258 yards on 30 carries and scored on a 15 yard run in the Trojans 28-22 overtime win over highly regarded Fillmore Central. 6-4, 205 Shane Jirska was the hero in the game, scoring the winning touchdown in overtime, while Steffan Hotes added the 2 point conversion. Jirska actually ran for 101 yards in the thriller and scored 3 TDs on short bursts of 2,1 and 7 yards.

Unofficially, Cody Ensz has rushed for 1,291 yards and 16 touchdowns through 7 games for Tri-County. The mind-boggling fact is that the 5-8, 160 pound senior has accumulated 920 of those the past 3 games, and 1,192 the last 4 outings. Since Ensz has started his ground assault, the Trojans are 4-0, after starting the season with three straight losses.

*Noah Kasbohm-Nebraska City - 6-3, 210 pound senior pulled off a double-double in a heart pounding 35-32 loss to Waverly. Kasbohm completed 15 of 26 passes for 203 yards and a couple touchdowns. The Pioneer quarterback also did it on the ground with his 126 yards on 24 totes and TD. Despite playing for a 2-5 football team, Noah has managed to throw for 1,017 yards and 10 touchdowns. He was just short of that thousand yard passing mark a year ago, narrowly missing the mark by 13 yards. On defense, Kasbohm has intercepted 3 passes and recovered 3 fumbles in 2015.

*Ryan Mckeeman-Maxwell - I think it's safe to say the Wildcats did not treat their rivals from Paxton very hospitable last Friday night. Mckeeman and his Maxwell football team raced to a 57-17 halftime lead and kept the heat on till the scoreboard nearly shorted out, showing a 94-23 final winning margin. The 5-7, 150 pound senior, who has already run for 1,278 yards and 20 TDs in 2015, hit the end zone in 3 different categories in the 1st quarter alone. Mckeeman opened the scoring for the 'Cats with a 37 yard run, picked up a loose fumble and returned it 17 yards for a score, then ran under a 65 yard scoring pass from QB Blake Morrissey.

Mckeeman scored for 45 and 42 yards out in the 2nd quarter, then opened the 3rd quarter with a 35 yard scoring jaunt to complete his scoring evening. Ryan also made 8 tackles in the game. You just cannot ask much more from a player. Coach Ryan Jones really has his Maxwell team going in 2015 after losing one of the finest 8-Man runners in the state to graduation. Can the Wildcats make it all the way to the D-2 semis again?

*Kobe Paprocki and Bradley Bunner-Clarkson-Leigh - Two headed rushing monster in the Patriots 36-30 loss to a scary and improving Humphrey/Lindsay HF team. Paprocki, the Patriot quarterback, toted the ball 30 times for 182 yards, scoring from 35 and 13 yards away. Kobe also completed 5 of his 12 passes for 53 yards, but 2 of those throws went for touchdowns. Meanwhile, Bunner, who has 927 yards this fall, rambled for 149 yards on 23 carries and caught a 15 yard TD pass from Paprocki.

*Trevor Peterson-Lincoln Northeast - 6-0, 180 pound QB led his Rocket football team to a near upset road win over Norfolk before Northeast fell, 35-33. All Peterson did was complete 25 of 44 passes for 319 yards and 3 touchdowns, 2 coming in the opening quarter. The Rockets let Norfolk know they meant business, scoring on their first three possessions of the football game. Norfolk made some 2nd half adjustments and it's a good thing, because Peterson had burned the Panthers, going 20 for 29 with 246 yards and 2 touchdowns. Trevor Peterson will get his chance to bedevil Grand Island at Seacrest Field this Thursday.

I wonder if outstate Nebraska knows just how good Trevor Peterson really is? After 7 games, Peterson has completed an unofficial 148 0f his 247 passes (60%) for 1,880 yards and 16 touchdowns and 9 INTS. His 1,880 yards is 226 more than Papio's Chad Lechtenberg, whom MaxPreps lists as Class A's top passer. Lincoln NE is currently 12th in the wildcard race and could certainly be a dangerous draw should they make the playoffs.

*Lane McCallum-Norfolk - Buoyed Norfolk to that 35-33 come from behind win over Lincoln NE. The do-it-all athlete rushed 30 times for 207 yards and scored on touchdown runs of 33 and 4 yards. But honestly, that is just a fraction of what this 190 pound junior contributes on any given Friday night. In that Northeast game, McCallum, a linebacker on defense, swatted away a two-point conversion pass attempt by Rocket QB, Trevor Peterson. That eventually would be the difference maker in the game. McCallum also kicks off, boots PATs and is on the "good hands" upfront crew that is in when an onside kick is suspected. Of course, after Northeast pulled to within 35-33 very late in the contest, it was McCallum that recovered Lincoln Northeast's onside kick. You just knew it, didn't you?

When the Panthers need to quick-kick, who do you think gets that job? McCallum. Difference maker on the football field and on the hardwood come hoops season.

*Brad Johnston-Scottsbluff - What a player! After the stout Aurora defense held him to 14 yards on 12 carries, the powerful, speedy Bearcat RB was ready to roll when Scottsbluff hit the field in Sidney. Johnston took it to the Red Raiders with 203 yards on 20 carries and scored on runs of 1, 40 and 14 yards in the Bearcat's 46-14 romp. The 5-11, 210 pound senior now needs only 71 yards to notch his 2nd straight 1000 yard rushing season. I sure like this kid.

*Ryan Schlueter-Centennial - After being held 43 yards rushing by Malcolm's stingy defense, Thayer Central was the unlucky next opponent for Mr. Schlueter and his Bronco buds. The 5-7, 160 pound scooter darn near ran for 300 big ones against Thayer, going off for 275 yards on 24 carries and 3 touchdowns (2, 3, 1 yard runs). Hey, this dude is really a solid runner, having gained a cool 819 yards as a sophomore. From his outside linebacker position, Ryan has logged 39 tackles thus far in 2015 while also recovering 3 fumbles.

*Trevor Nichelson-Ashland-Greenwood - Made this list every single week thus far in 2015. In the Bluejay's 48-13 win over Omaha Concordia, the junior sensation rambled for 212 yards on 20 carries, scoring 3 times on runs of 10, 28 and 55 yards. After 7 games this fall, Trevor has rushed for 1,433 yards on 159 carries (9.0/carry), scored 19 touchdowns, made 61 stops on defense (8 for losses), recovered 2 fumbles, returned a kickoff for a touchdown and completed both passes he attempted. For his career, Nichelson has rushed for 3,853 yards, scored 59 touchdowns and been in on 170 tackles, 27 of which were for a loss........and he is just a junior. Do you suppose he likes football a little bit?

*Cody Nickel-Axtell - 190 yards on 35 carries in 33-14 win over Shelton. Hard running senior has 860 yards for the year. Yards after contact specialist.

*Troy Huffman-Burwell - 119 yards on 15 carries in the Central Valley win.

*Victory Sikes-Burwell - 115 yards on 11 carries for the QB in the Central Valley win. Nope, that's it for Longhorn 100 yard runners in the game.

*Adin Stiles-Elkorn - 121 yards on 19 totes with TD jaunts of 1 and 18 yards in the Antlers 49-28 loss to Elkhorn South. WR Alex Schiefelbein also hauled in 7 receptions for 120 yards, including a neat 71 yard scoring catch.

*Riley Tegtmeier-BDS - Witty quarterback ran for 106 yards on just 5 tries, scoring on 3 of those totes. Tegtmeiers scoring runs covered 14, 73, and 61 yards. This is a great football team, friends.

*Cody Byers-Lawrence-Nelson - 168 yards on 9 carries and 3 TDs in the Raiders 68-0 blanking of Meridian.