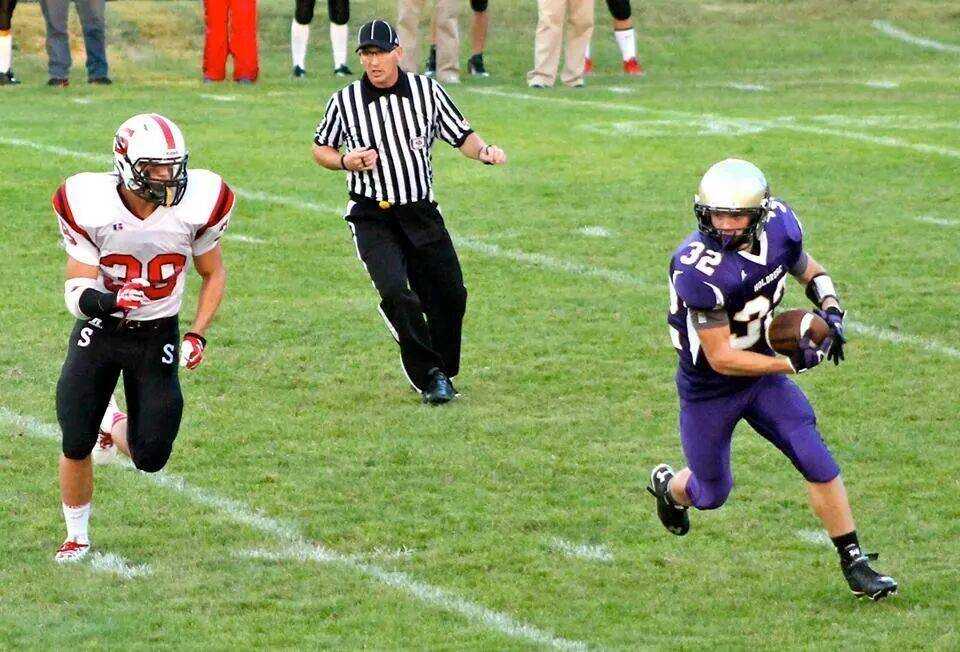 Holdrege flyer Cooper Rogers (#32). Without a doubt, one of the state's best running backs.

We now present the 2nd wave of football stars from week 7. They could just as well been in the first installment, no big deal. My one hope is to salute as many top notch performers as possible and simply gets better every week.

Lights, camera, action..........well, actually no camera. I'll go with the keyboard on this trip.

*Cooper Rogers-Holdrege - Was I ever impressed with this young man after I saw him perform against Central City last week. After the Bison defense held the :10.6 sprinter to 13 yards on 13 carries in the first half, the Duster offensive started opening those holes and Mr. Rogers showed what he could do. Back to back runs of 54 and 80 yards set the tone for a 29 carry, 227 yard night. The blazing Rogers scored a third touchdown on a 9 yard run that featured the 175 pound senior dragging half the Central City defense the final 6 yards for the score. Not only that, but Cooper also tossed a 52 yard halfback touchdown pass to splendid wideout Jackson Berney.

For the season, Cooper Rogers has piled up 1,354 yards (7.0/carry), and scored 18 touchdowns. You must remember that Rogers missed all of last season with a horrible knee injury. You can still see that Cooper cannot make super sharp cuts, and maybe that isn't his running style, but what impresses me is the fact most of Roger's carries are right, smack dab into the heart of the defensive line. And I'll guarantee you, if there is just a sliver of daylight, there isn't a defender in Class C-1 that can catch this lad if he gets even a half step behind them.

*Millard South Defense - Holy upset, man. The Patriot defense came to town and forced the mighty Islanders into 5 turnovers, coming away with a 13-10 shocker last Friday. The always staunch Grand Island was just that, limiting the Millard South offense to a meager 4 first downs and 53 yards, but when the Patriot offense needed it most, their defensive counterparts came through. The killer may have occurred when 6-2 senior free safety, Jordan William pirated a Trey Kissack pass and returned it 87 yards for a Pick 6. It's guys like the senior trio of Adam Crampton, Barrett Mcdonald, and Bryce Cooney that make the Millard South defense go. Best I also mention Williams and the Patriots tackle for loss artist, Alex Cloyd.

*Kyle Wemhoff-Humphrey St. Francis - Was "The Man" in the Flyers 40-8 victory over a very top notch, and unbeaten Osceola team that had been averaging 60 points an outing. Wemhoff ripped off 195 yards on 35 carries and scored on runs of 9 and 24 yards. Kyle also caught a 9 yard scoring pass in the big win. Is there ever a season where Eric Kessler's Flyers are not a postseason contender? It's been 20 consecutive years Humphrey St. Francis has been a playoff team and only twice have they lost a first round game in those 20 appearances.

*Garris Karr-Arlington - Where in Heaven's name has this guy been hiding? Karr is listed as a wide receiver one place and a fullback by another publication, but all I know is Garris Karr seemed to jump out of nowhere and explode onto the scene. Probably a simple explanation for all this, but a week ago, after having carried the ball a grand total of 8 times for 17 yards all season, Coach Steven Gubbels must have decided to get Karr the ball a little more.

The result was a 37 carry, 204 yard performance in the Eagles 34-6 victory over Omaha Concordia. Last week, all Garris did was run for 155 yards and score 5 touchdowns as Arlington trounced Douglas County West, 44-13. Karr's scoring jaunts covered 9, 39, 1, 5, and 3 yards. That's 355 yards and 6 TDs the last two games. Keep feeding Karr that football, Coach!

*Chad Lechtenberg-Papillion LaVista - Man, did the 6-3, 190 pound quarterback look good in the Lincoln North Star game or what? In the Monarch's 21-6 win over the Gators, Lechtenberg completed a sizzling 27 of 36 passes for 349 yards and 2 touchdowns. That's hitting the old target at a 75% clip, my friends. That nice little performance catapulted the Papio sharpshooter right to the top of the Class A passing charts after 7 games.

For the season, the Monarch ace has nailed 138 of his 232 passes (59.5%) for 1,654 yards and 13 TDs. Lechtenberg is really, really accurate on his short, flare throw, out patterns. Are you watching, Tommy? His release reminds me somewhat of a MLB pitcher with that high, outstretched arm movement. Very good high school quarterback.

*Wilber-Clatonia Defense - The defenses were out in full force last week. The Wolverine defense was apparently not overly impressed with Fairburys sensational sophomore running back, Jacob Johnson, and his stats. Not only did the green and black clad boys from the Bohemian Alps South drill the Jeffs 48-0, but that swarming "D" limited Johnson to just 9 yards on 15 carries. Meanwhile, Wolverine QB Connor O'Toole was running for 117 yards on just 7 carries and a touchdown (41 yard run) I'm beginning to think this Wilber-Clatonia football team is a pretty solid outfit, especially in light of the fact they lost one of the best senior classes they had in years to graduation a year ago. That tells you right there what a fine job Coach Lynn Jurgens does year in and year out for that school.

*David City Aquinas Offense - In what has become a trademark for a Ron Mimick coached Monarch football team, eighteen, yes 18 different backs carried the football in the 78-0 win over Tekamah-Herman. I can almost guarantee that if I would have been there, Coach Mimick may have considered letting me get a carry........well, Ok, maybe not. The Monarchs threw only 2 passes all evening, and the Monarch defense held Tekamah-Herman to a minus 1 yard of total offense for the game. All in all, twenty six, yes 26 different players either made a tackle or logged an assist for Coach Tony Smith's "D". That's just the way those boys do things down there, folks. Pure Class.

*Wyatt Svara-Wahoo Neumann - 5-9, 210 pound fullback caused all kinds of problems for Columbus Lakeview last week. Svara carried 13 more times than he has in any previous outing this and the result.....22 carries for 175 yards and a TD in the Cavaliers 38-20 win over Lakeview. The burly FB displayed some quickness, hitting the "A" gap on both sides of the center for several big gains. Svara also caught a 22 yard FB screen pass and made 5 tackles from his LB position. The senior, incidentally, is the 2nd leading tackler for the Cavs, logging 42 stops this fall.

*Dayton Sealey-Hastings St. Cecilia - Jiminy Christmas, could Dayton have scored in any other way in the Bluehawks 66-14 win over Superior? Sealey scored on runs of 1 and 80 yards, pirated a Wildcat pass, turning it into a Pick 6, and returned a kickoff 87 yards for a TD and another one for an 81 yard touchdown. Ok, he didn't bring a punt back or catch a scoring pass. Good grief, give the kid a break.

*Trey Stutheit-Johnson-Brock - 6-3, 180 pound junior QB completed 7-10 passes for 109 yards, rushed 13 times for 123 yards and 2 touchdowns (14, 42 yard runs), intercepted a pass, and made 9 tackles. Stutheit also picked up a fumble and returned it 30 yards for a TD in the Eagles 52-18 win over Lincoln Parkview Christian. For the season, Trey has completed 72 of 104 passes, an incredible 75% completion rate, for 753 yards and 8 TDs. The do-it-all junior has also rushed for 355 yards and 7 more scores. On defense for 4-2 Johnson-Brock, Stutheit has been in on 61 tackles, recorded 3 sacks, pirated a pass and returned a fumble for a touchdown. Pretty solid, consistent performer.

*Tucker Pinyan-Lincoln Parkview Christian - You didn't think I'd leave the Patriots out, did you? I like this football team, who suited up only 15 players when I saw them at Kenesaw. Positive coaching staff really impressed me. Anyway, Pinyan, a sophomore quarterback, was good on 17 of 28 passes in that Johnson-Brock loss. Those 17 aerials were good for 197 yards and 3 touchdowns. Standout hoops player, Henry Tanksley caught 6 of those throws for 61 yards and 2 TDs. Senior Isaac Branting also hauled in 6 receptions for 54 yards, and 6 foot 9 inch, Nosawema Iyagbaye caught 2 Tucker Pinyan passes, one going for a 37 Yard TD. Yeah, Iyagbaye is a basketball player!

*Brayden Schuppan-Doniphan-Trumbull - Just another day at the office for Schuppan. 25 carries, 200 yards and an 80 yard scoring run in the Cardinals 40-0 pasting of Sandy Creek. Brayden's rushing total for 2015 now stands at 1,213 yards. The senior speedster has also scored 9 touchdowns.

*Derek Renner-Battle Creek - Eclipsed the thousand yard mark by rushing for 119 yards on 22 touches in the Braves 35-0 whitewashing of Atkinson West Holt. Renner scored 3 TDs in the win and helped put Battle Creek at 7-0 for the season. Make no mistake about it, the Braves are one of Class C-2's elite squads, right up there with Aquinas, and Hastings St. Cecilia. Is Gibbon in that group?

*Travis Holcomb-Centura - Went over the 1000 yard mark by a yard in the Centurions 8-6 overtime win over rival Wood River. The 6-4, 210 pound all-around, Mr. Everything athlete, rushed a grueling 47 times for 197 yards after sitting out the Gibbon game with an ankle injury. Holcomb, also one of the top tacklers in Class C-2, had 9 stops in the Wood River game, giving him 65 for the year. This dude is one heck of a football player. Ask any coach who has seen him play or watched one minute of film on this kid. Solid, Jackson!......er, Travis.

*Jaylin Bradley-Bellevue West - Talk about coming through in the clutch! In Class A's Battle-of-The Year vs. Millard North, the air oriented Thunderbirds turned to the run game and Bradley was money. The talented junior exploded for 270 big ones on 28 carries, scoring touchdowns of dashes of 39 and 6 yards. That gives Jaylin an even-steven 1000 yards right on the button this year. Oh, don't think Bellevue West completely abandoned the passing game in the 35-28 win. If you read Part I of my Friday Night Heroes, you'd know that Jadyn Kowalski completed 14 of his 22 attempts for 154 yards and 2 Tds. Cade Johnson led the receiving corps with 4 catches for 93 yards. Two of those went for scores in the first quarter. The scoring receptions covered 54 and 19 yards. Speed merchant Trystn Ducker was also a major player in the game with 8 receptions, good for 50 yards.

*Gage Orton-Plattsmouth - 5-11, 190 pound dynamo went over the 1000 yard mark with his 11 carries, 101 yards and 2 touchdown performance against Platteview. That gives Orton 1,047 yards for 2015 to go along with his 19 touchdowns. The Blue Devils are cruising along at 7-0 with only Nebraska City and Waverly standing in the way of a perfect regular season mark. Plattsmouth has proven they can play Big Boy football in Class B. Coach Bob Dzuris is just simply one of the top coaches in Class B. No doubt about it.

.......up next, Part III of Friday Night Prep Football Heroes.