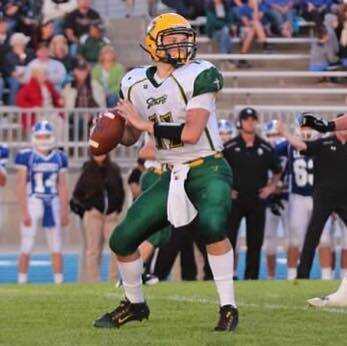 What a productive week for individual stats in high school football. Football is a team sport, but sometimes there just appears to be something in the water, the stars align just right, or somebody is in a "right situation, right time" deal and the statistics just sem to pile up for a player. Nonetheless, it was a banner week for outstanding marks and if we don't cut right to the chase, this group might take a solid week just to salute everyone that deserves some props. This looks like another 3 section Friday Night Prep Heroes week.

*Kyle Francois-Nebraska City Lourdes - Ok, this dude is a 5-6, 165 pound junior. Plenty solid, but tough to track coming out of the backfield. Francois has enjoyed a pretty successful 2015 thus far, running for 645 yards, 14 touchdowns, and 8.3 yards a carry. But Friday against Mead, Francois must have located a phone booth and changed into Superman.

On defense, it was reported the junior had 9 solo tackles and 20 assists. That would be a little rare, however, Francois has already made 78 tackles in 5 games, including a 23 tackle night against Sterling, so it just may not be a misprint. In addition to his 14 rushing TDs, Kyle Francois has that Pick 6 for a score and has taken a kickoff back for a TD in that Sterling game. So now, all of a sudden, Mr. Francois rushing total goes from 645 to 1,061 yards. Welcome to the 1000 Yard Club, Kyle!

*Ryan Moritz-Omaha Skutt - Junior quarterback stepped into the shoes of graduated All-State QB Isaiah Ramsey and took control. In a definitive 42-10 thumping of Gretna, the 6-0, 180 pound signal caller rushed 7 times for 135 yards and 2 TDs (39, 51 runs) and completed 5 of his 8 passes for 119 yards. Not far off Ryan's pace was Skutt's big fullback, all 217 pounds of him, Ian Urban. The power running Urban bulldozed his way to 100 yards on 21 carries, scoring touchdowns on runs of 3, 17, and 2 yards. The Skyhawks are rolling along with a 7-0 record, with the only close shave coming in the 31-24, 3 OT win at Lincoln Pius 2 games back.

*Bradyn Snell-Gibbon - All-State candidate was on target for 16 of his 25 passes for 249 yards and 4 touchdowns in the Buffaloes big 40-6 win over a tough Arcadia/Loup City team. The calm, cool, and collective senior leader has already thrown for 1,272 yards in 7 games, 9 more than all of 2014. Snell, 160 pounds, smart, and quick, has completed 64% of his 130 throws for 20 TDs with only 4 interceptions. Bradyn can also kill you with his legs, having rushed for 306 yards and another 6 scores this season, including 71 on the ground in that Arcadia/Loup City game.

Coach Mark McLaughlin's 2015 Gibbon football team has captured the attention of every coach in Class C-2 and would certainly be an unwanted draw anytime in the playoffs.

*Matt Masker-Kearney Catholic - Poised sophomore quarterback helped the Stars get back on track following a heartbreaking loss to Central City. Masker embarrassed GICC by completing 17 of 25 passes for a whopping 334 yards and six touchdowns in a 64-21 route. Masker and Kearney Catholic roared to a 45-14 halftime lead and never looked back. Matt threw touchdown strikes to 5 different receivers in the laugher. Brady Holtmeier caught 2 TD passes, while Bryce James, Grant Buschkoetter, John Baack and John Husmann hauled in one each.

Thus far in 2015, the outstanding sophomore Masker has completed 100 of his 169 passes for 1,274 yards and 18 touchdowns. This dude plants his feet and gets rid of the football in about 2 seconds if he's not rushed. Looks like a senior back there.

*Logan Duryee-Omaha Westside - How sweet it is for this young man to be having a heck of a senior season this fall. After breaking his jaw in game 4 last year and living on a liquid/soft food diet for nearly 6 weeks, Logan Duryee went through a wicked rehab program for nearly 11 grueling months. The intelligent 5-11, 175 pound senior has now run for 1,175 yards on 168 carries with 12 touchdowns. In the Warriors 55-14 win at Columbus last Friday, Logan racked up 136 yards rushing on just 12 carries, hitting paydirt from 41, 28, and 10 yards out. Just in case you're wondering if this dude is fast? :11.2 hundred meters, friends and a low pad level when he runs to boot.

*Alex Kowalski-York - In the Duke's 26-24 win over once-beaten GI Northwest, Kowalski rushed for 129 yards on 24 tries and scored on a 2 yard run. Kowalski is a 190 pound junior by the way, so this isn't the last opponents will see this kid. 6-1, 180 sophomore Simon Otte added 2 more rushing touchdowns on short bursts of 2 and 8 yards in the game. York is currently 7-0 and rated # 3 in Class B. It also helps when you have one the finest coaches in the entire state running your program in Glenn Snodgrass.

*Omaha Central Defense - Held bellevue East to 120 yards of total offense in the Eagles 49-6 thrashing of the Chieftains. 23 different players were in on either a stop or an assist in that football game. Senior Johnny Whelan leads the way in that tackles department with 59 stops. The 5-8, 200 pounder also has 8.5 tackles for losses. Not too far behind him is big 6-4, 260 pound defensive end Elijah Wilson, who has 50 tackles, 11 of those for losses. To show what kind of balance this Eagles "D" has, no less than eight players have 20 stops or more thus far in 2015.

Omaha Central is currently #3 in the Nebraska Top 10 World-Herald ratings.

*Moses Bryant-Elkhorn South - The sophomore sensation finally got some carries against rival Elkhorn and responded with 245 yards on 20 totes and scoring runs of 4, 57, and 60 yards. After holding a slim 14-7 halftime lead, the Storm "stormed" back after intermission to post an impressive 49-28 victory and remain an unblemished 7-0 in 2015. QB Brandon Wright also had a big rushing night, going for 166 yards on just 12 touches. The 175 pound junior scored on runs of 3, and 57 yards in the "W". Wright has 408 rushing yards on the year, while Moses Bryant has accumulated 775 yards and 12 TDs thus far. Elkhorn South is currently rated #2 in Class B behind Omaha Skutt.

*Aiden Stiles-Elkhorn - 5-10, 180 junior ran for 120 yards on 19 carries, and scored a couple touchdowns on runs of 1 and 18 yards in that 49-28 loss to Elkhorn South. Stiles has rushed for 681 yards in 2015 for Mark Wortman's Antlers. Teammate Alex Schiefelbein pulled down 7 receptions in the game for 120 yards, including a nice 71 yard TD catch. The junior receiver, who averaged 22 yards a reception as a sophomore, currently has racked up 20 receptions for 327 yards and 3 TDs in 2015.