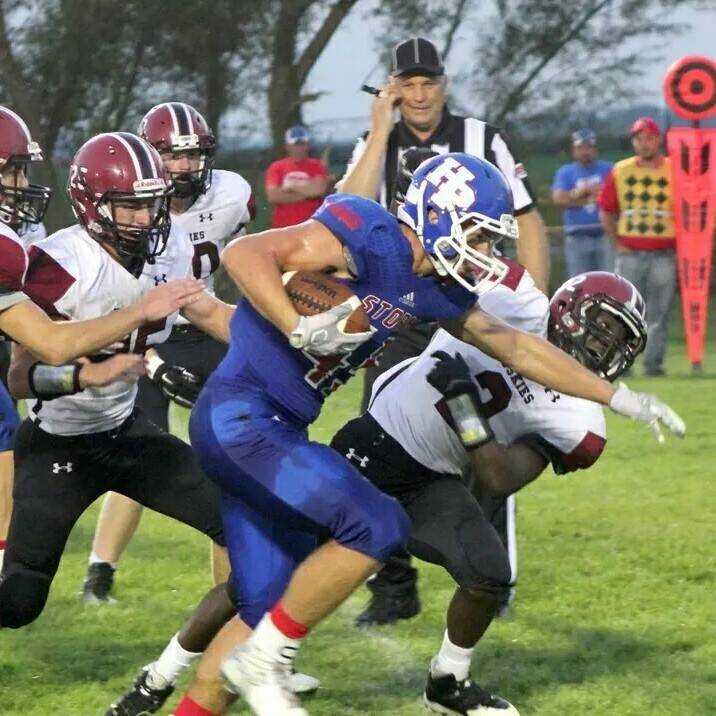 Round two of the Friday Night Heroes that keep us coming back to those high school football games. Is there any way to slow this season down? It just flies by so quickly and the season just never lasts long enough for this old guy.

*Josh Demers-High Plains - This is one of those "once you try this, you'll never go back to that" stories. So here stands Josh Demers, solidly entrenched at his tight end/linebacker positions. All-District linebacker a year ago, so you know he's good. The third game of the year, starting RB Garret Lesiak breaks his arm after 1 carry against powerful BDS. High Plains has to turn to QB Thomas Young for the running game and he is stuffed to 19 yards on 19 carries. Nothing High Plains could do in that 40-26 loss.

The next week in practice, the 195 pound Demers volunteers to give the RB position a whirl. Now, it's not like Demers never logged a carry. The Storm would give him the ball from that Tight End slot a couple of times a game, but no more than that. That Friday, Demers carries 7 times and bolts for 83 yards in High Plains 53-14 win. The big guy scores three times. Now it's time to take even more pressure off Thomas Young and let him concentrate on throwing the football too.

So last Friday, against a vastly improving and very quick Cross County team, Josh Demers is fed the ball 18 times. The result.....179 yards and 4 touchdown runs of 12, 54, 10 and 21 yards. Demers also caught a 42 yard TD pass from Young in the Storm's 51-14 win over the Cougars. And Quarterback Thomas Young? Well, Demers rushing success freed up the junior star so he could throw the football a little bit. The result was 12 of 16 passing for 222 yards and 3 touchdowns.

No disrespect to Mr. Lesiak, but I think an already potent High Plains football team just got a whole lot better and I'm relatively certain Josh Demers may not miss his old tight end position a ton.

*Noah Pelan-David City Aquinas - Scored on touchdown runs of 4 and 12 yards, and shocked an already stunned Omaha Brownell-Talbot team with a 90 yard kickoff return TD. The Monarchs went about their usual business and crushed the previously undefeated Raiders 49-0. Aquinas played their usual offensive game, distributing the ball to multiple running backs during the contest.

*Colby Ensz-Tri-County - The 5-8, 160 pound junior continued his assault on opposing defenses. In the Trojans 27-24 cliffhanger win over Shelby/Rising City, Ensz rambled for 242 yards on 36 carries and scored touchdowns on 13, 30, 9, and 22 yard runs. Colby has now rushed for 934 yards the past 3 games alone, and added to his 1st three outings, the amazing runner has accumulated 1,033 yards, 15 TDs, and 38 tackles from his free safety position. Whatever you're doing Colby Ensz, just keep right on doin' it!

*Trey Taubenheim-Amherst - Had his normal field day throwing the football in a 49-0 win over South Loup (Arnold/Callaway). Taubenheim, 8-Man football's leading passer, completed 15 of his 20 throws for an even 300 yards and 3 TDs. Trey also ran the ball 5 times for 67 yards and another score. On defense, he also made 3 tackles and 2 of those were for losses. In 5 games, Taubenheim has thrown 108 times, completed 73 of those (67.6%) for 1,343 yards with 22 touchdowns with only 3 interceptions.

In his 22 game career at Amherst, Trey Taubenheim has completed 201 of 304 passes for 3,803 yards, 69 TDs and only 9 picks. The outstanding senior has a chance to hit the 5,000 yard career passing mark should his team advance deep into the playoffs. What a quarterback.

*Preston Schnitzler-Kenesaw - In the Blue Devil's 71-14 win over Lincoln Parkview Christian, the 183 pound QB made it appear as if he was playing against a group of middle schoolers. Schnitzler ran unscathed, 65 yards to paydirt on the game's opening play. His 2nd carry went for a 59 yard TD. The 3rd touch of the afternoon was a "boring" 18 yard gain. 4th carry, a 17 yard TD, 5th carry, a 53 yard touchdown sprint, and his 6th tote, another "boring" 33 yard gain. His 7th and last carry of the 1st Quarter, and the game, was a 9 yard TD scamper. His father, head coach Craig Schnitzler, thought maybe that was sufficient, so he stopped having Preston tote the pigskin after 7 carries, 5 TDs, 216 yards and a 50-6 1st quarter lead. What a spoil sport. Only kidding.

In just 4 games, (Preston missed one with an injury), the solid senior has rambled for 724 yards on only 51 carries, scored 15 TDs, and made 17 stops on defense. Here is a young man, who had he been healthy throughout his career, would be in the record books. Preston nearly became only the 5th freshman in history to rush for a 1000 yards in 2012 when he ran for 965 yards. In his final game against Bertrand, Preston was on his way to a big night when he was knocked out of the game after only 5 carries and 19 yards.

He missed his entire sophomore season with a torn ACL, suffered in the pre-season. Despite all the setbacks, Preston Schnitzler has still rushed for 3,499 yards on 382 carries, a 9.2 per carry average, and scored 67 touchdowns. He has thrown 43 passes, completed 21 for 419 yards, and 9 TDS. On defense, where he could easily be an All-State linebacker, Schnitzler has made 189 crunching tackles, of which 93 were solos and 17 were for losses. This kid will take your head off when he hits you too.

Hey Coach Schnitzler? Ever consider having a couple more sons? You just don't get much better athleticism than those 3 Schnitzler boys from Kenesaw.

*Drew Gilliland-Mitchell - What s success story here! Gilliland has toiled for a Mitchell Tiger team that has won NO games the past 2 seasons. Nadda. Zilch, Zip, Zippo. But this season......different story, matter of fact, a 360 degree turnaround. The 2015 version of the Tigers is currently 5-0 and QB Drew Gilliland is one of the main reasons. The 5-9, 145 senior has already rushed for 1,101 yards on just 94 touches and 14 TDS. The Mitchell rocket sports an 11.7 yards per carry and can throw the ball when he has to, completing 73% of his 26 throws for 318 yards, 4 touchdowns and no interceptions. 2 weeks ago Mitchell beat a 3-1 Gordon-Rushville team 37-28. Gilliland rushed for 17 times for 241 yards and 4 TDs. He also was on target on 3 of his 4 passes for 69 yards and another TD. In last week's 27-15 victory against a normally tough Chadron team, Drew piled up 220 yards rushing on 24 carries and another 3 touchdowns. In the passing department, he completed 7 of 8 for 119 yards and another score.

Starting to get the picture here? The Tigers play only 8 regular season games in 2015 and will close with 4-1 Ogallala and a currently 5-0 Chase County squad.

*Trey Kissack-Grand Island - First year starter continues to play smart and play well for the unbeaten Islanders this season. In last week's 49-7 victory against a good Fremont team, Trey riddled the Tiger defense by hitting 16 of his 21 passes for 213 yards and 4 first half TD passes. Thus far in 2015, Kissack has completed 94 of his 143 aerials for 1,198 yards and 12 TDs with only 4 picks. When Trey Kissack has to run, the young man knows precisely when to slide. It's called self preservation folks. Smart kid.

*Chris Doty-Grand Island - This dude is small as a freckle and tough as a 200 pound fullback. Throw in quick-as-a-wink and you have one heck of a Class A running back. Amazing is the fact Chris Doty is only 5-8 and 150 pounds and takes the ball right to the heart of the defensive line at times. The heart-of-a-lion senior enjoyed the finest offensive night of his career against Fremont, scooting for 163 yards on 22 carries and escaping on TD runs of 8 and 87 yards. What a job Doty has done picking up the rushing slack left when a season ending injury left a gaping, Adan Redwine hole.

Brady Bamesberger-Central City - All-State wide-out deflated Kearney Catholic with his 10 receptions for 171 yards night last Friday. A splendid 85 yard TD pass from QB Mitch Carlson really lit up the crowd. In 5 games this season, the lightning fast Bamesberger has hauled in 36 aerials for 522 yards and 5 TDs. The 5-11, 165 pound senior has also booted 18 of 21 PATS and nailed his only 2 field goal attempts, good for 24 and 44 yards. Brady also normally boots his kickoffs into the opponent's end zone for a touchback.

From his safety position, #8 has made 17 tackles and picked off 3 passes, one a Pick 6 against Ord. This guy is one of my favorite players in all of 11-Man football. Brady "Breakneck' Bamesberger.

*Bradyn Schuppan-Doniphan-Trumbull - The speedy Schuppan surpassed the 1000 yard plateau against Sutton when he ran for 134 yards on 25 carries. The senior dandy has now rushed for 1,013 yards on 127 touches in 2015 and has not been held to under a 100 yards yet this season through 6 games. Bradyn has become a dangerous pass receiver the past 3 weeks, catching 6 balls for 77 yards, including 3 for 36 last week in that Sutton loss (16-13). This kid is also an open field tackling machine on defense, already logging 18 solo stops from his safety position.

*Trevor Nichelson-Ashland-Greenwood - You just knew it, didn't you? Nichelson notched his 2nd consecutive 1000 yard rushing season by running for 277 yards on 30 carries in the Bluejays 41-21 win over Ft. Calhoun. Right now, Trevor is at 1,221 yards for the season and 3,641 for his career and throw in 70 touchdowns and you have one amazing Junior Running back!

Norfolk Panther "D" - Is there a such thing as a positive in a 13-3 loss? If you play defense for Tom Olson's Norfolk team, there certainly is if that loss is to #1 Millard West. Holding that explosive Wildcat offense to 13 points is a positive indeed. Led by Rory Fernandez 13 tackles and recovered fumble, Lane McCallum's 11 stops, and Josh Kohl's 8 tackles plus an interception, that Panther defense is the best in Class A. You can't forget lineman James Walton-Thoene (5-11, 220) and Josh Taylor (5-11, 220) either.

You have to applaud Head Coach Lynn Jurgens for the job he has performed at Wilber/Clatonia this season. The man had 2 starters returning on offense and 2 on defense. The Wolverines lost 16 seniors a year ago, yet have compiled a 6-0 mark, and outscored their opponents 248-44. No team has scored more than a touchdown on them in 2015.

*Jordan Wenzl-Sterling - 6-3, 165 pound speed merchant escaped for 182 yards on 22 carries in a heartbreaking 32-30 loss to Johnson-Brock last Friday. The fleet-footed Wenzl is also a dangerous return man, having already brought a kickoff back 75 yards for a score against Pawnee City. Jordan nearly took one to the house from 78 yards out on a kickoff against Exeter-Milligan, but was tackled a few yards short when his heel was clipped.

Cody "Benny The Jet" Feist-Yutan - Didn't need many carries in a 67-6 laugher vs. Tekamah-Herman to get his 211 yards. It took only 8 touches to run for 5 touchdowns and those 211 yards as the Chieftains bolted to a 60-0 first half lead against Tekamah-Herman. Benny the Jet now has 922 yards on 93 carries (9.9/carry), 20 TDS, and 45 tackles on defense and an incredible 36 solo stops. Tremendous football talent!