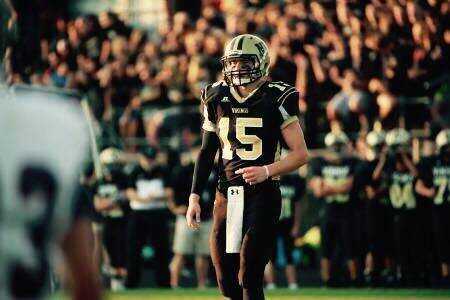 Heavens to Murgatroyd, I 've never seen many wild performances by quarterbacks like last week. The air must have been just as light as it is at Coors Field. Hey, I don't mind giving a high 5 to the Gunslingers. Without those guys, the plays would never get started.

*Christian Ellsworth-GI Northwest - This outstanding young man is getting scarier by the week. On Friday, Ellsworth got it all done in the 1st half, then stood on the sidelines encouraging the reserves the rest of the way. Check out these numbers:

For the year, Ellsworth has completed 61 of his 98 passes for 795 yards, 7 touchdowns and only one interception. Now for Christian's career statistics. Make sure you are sitting down for this.

In just 11 career games, Christian Ellsworth as completed 163 of 251 passes for 2,021 yards, 21 TDs and thrown only 4 interceptions. That is a completion percentage of 65%. And some are wondering if this kid is Division 1 material?

*Dillion Hike-Bellevue East - Riddled Omaha Bryan by completing 32 of 52 passes for 379 yards and 2 Tds. The Chieftains won the game 36-14 and Hike's stats for the year elevated him to the #1 slot in Class A for passing yardage.

Thus far in 2015, the junior star has been on target with 78 of his 127 throws, good for 918 yards and 6 touchdowns. The Chieftain sharpshooting expert is hitting those passes at a 61% completion rate. For his career, Dillon Hike has thrown for 1,997 yards, including 1,083 a year ago. The good looking QB has already improved his completion percentage for 49% a year ago to his current 61%. Is anybody taking notice in the college football ranks? Better start right now.

In the past 2 games alone, Emmitt has averaged 11.3 yards a pop, rushing 31 times for 347 yards. He be leading Class B in that department, friends.

*Logan Anderjaska-Millard West - In the Wildcats 49-14 win over a good Lincoln East squad, he Logan decided to show the prep football world he still could run the ball. Against the Spartans, Anderjaska rushed only 8 times, but gained 176 yards and scored 3 TDs. A 168 of those rushing yards came before halftime. Thus far, the 6-1, 190 senior has rushed for 388 yards and passed for 448, while leading Kirk Peterson's 'Cats to a 3-0 record and the number one ranking in Class A.

*Trevor Peterson-Lincoln Northeast - Fired 29 passes in the Rockets 33-14 win over Columbus, completing 21 of those for 274 yards and a couple of TDs. In three outings, Peterson has been good on 48 of 83 passes for 638 yards and 5 scores.

*Hunter Fischer-Hastings St. Cecilia - Didn't like the fact Fillmore Central took the ball 56 yards down the field and scored on the very 1st possession of the game with the Bluehawks last Friday. Fischer, who had the running back chores all to himself due to Dayton Sealey's ankle sprain, bolted for 204 yards on 16 carries and 2 touchdowns. In fact, that opening drive bugged St. Cecilia so bad, the 'Hawks reeled off 58 straight points and buried the Panthers 58-7 on their Geneva home turf.

*Nathan Smith-Beatrice - Somebody must have made the Orangemen mad too, because they turned Smith loose to the tune of 246 yards on 25 carries in a very impressive 27-17 win over Mark Wortman's Elkhorn team. Beatrice ran for an unheard of 406 yards against the Antlers. You just don't do that to Elkhorn. By the way, Nathan Smith is a 5-9, 165 pound senior. In 2 prior games for the Orange, Smith had only rushed for 61 yards on 26 carries. Welcome to the big time, Nate.

*Jacob Simonson-Grand Island Heartland Lutheran - Hallelujah, the Red Hornets are 2-0 for the 1st time in the school's football history! Matter of fact, Heartland Lutheran has never won more than 2 games in a season. Well, Head Coach Preston Gehle and Mr. Simonson are out to change that in 2015.

*Jared Bubak-Lincoln Christian - Rushed for 209 yards and passed for another 146 in the Crusaders 40-21 win over Omaha Concordia. By the way, Lincoln Christian was behind 21-16 at halftime in that baby.

*Justin Lawrence-Waverly - Proved that Waverly can run the football too in the Vikings 38-21 win over Omaha Gross. Lawrence broke loose for 175 yards on 22 carries and scored from 6 and 2 yards out.

*Dylan Ruelas-Waverly - You certainly didn't think Waverly stayed on the ground the entire game in that Gross win, did you? Naaaa. Ruelas threw for 230 yards and two more scores in the 38-21 win, increasing his 2015 passing yards total to 832 big ones.

*Taylor Murph-Ralston - Poor kid finally broke loose a little in the Rams 24-7 loss to Lincoln Pius. The outstanding running back rushed for 128 yards on 21 carries and scored his team's only TD on a sparkling 75 yard scamper. It's been a tough year for the Rams (0-3) and Murph, who only has 162 rushing yards. Shame.

Drone sighting! - My good friend Ken Hambleton (Ham Bone) reported that, and I quote "Giltner may be the first high school football team, or any football team in Nebraska to use a drone. The high-flying, gyro-stabilized drone owned and operated by Perry Hosier, a local electrician, hovered about 50 yards away from the end of the east end zone.

The drone sent a live feed to the Giltner coach in the press box.

"They asked us if it was OK," Rotter said. "We thought, what the heck?"