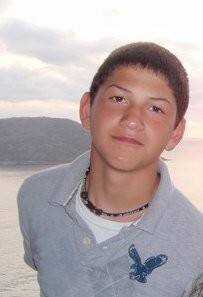 Fairbury sophomore Jacob Johnson is one of the best young backs in 11-Man football.

*Tyler Polacek-Howells-Dodge - Did it all in the Jags exciting 28-26 win over a much improved Cross County football team. The senior whiz rushed for 176 yards on 22 tries and scored on huge first quarter runs of 17 and 54 yards to boost Howells-Dodge to an early lead. Polacek came up big in the 4th quarter with what proved to be the winning score, by returning a punt 44 yards for a TD. He also completed 8 of 9 passes for 32 yards and that included an 11 yard TD strike to Zach Beyer. The 165 pounder also had 16 critical tackles on defense.

*Alex Goracke-Giltner - Sophomore signal caller kicked things off with a bang for the Hornets. Goracke connected on 18 of 36 passes for an astounding 417 yards and 5 touchdowns in Giltners 62-32 opening game win over an improved Palmer team. Christian Leichty caught 8 of Goracke's tosses for 167 yards and 2 touchdowns, while Brett Good pulled in 9 aerials for 146 yards and 2 scores as well. Will Jeff Ashby ever run out of good quarterbacks? Not while he's the head man for the Hornets. Ashby is one sharp cookie.

*Jacob Johnson-Fairbury - 6-0, 182 pound sophomore was a huge force for the Jeffs in a 22-19 loss to a very fine Falls City team. Johnson, who rushed for 721 yards as a freshman, gorged the Tigers for 239 yards on 33 carries and 2 touchdowns. Johnson is one of the finest young running backs in 11-Man football, combining speed, power, a great stiff-arm, and consistent yards after contact to give the Jeffs a full package. This Fairbury team is a ton better than they were in 2014 and feature another sophomore talent in quarterback Alex Wasserman.

*Jaydn Kowalski-Bellevue West - It would be a pretty safe bet to say Kowalski will make this list nearly every week of the 2015 season. Last Friday against 5th rated Papio South, the skilled marksman drilled 17 of his 23 passes into the hands of his Thunderbird receivers for 280 yards and 4 TDs. Three of his scoring tosses ended up in the capable hands of Caden Johnson, whose touchdown receptions covered 3, 34, and 64 yards. All Kowalski has done in the Thunderbirds disposing of two top ten Class A teams, is complete 65% of his 46 passes for 624 yards and 6 TDs.

Nebraska HS Football chief Mike Sautter told me Bellevue West may be a cut above the rest of 'em in Class A right now. In case you're wondering, the Thunderbirds do not meet Millard West (#1) during the regular season in 2015.

*David Englehaupt-Norfolk Catholic - Wyoming commit scored 4 TDs on runs of 8, 28, 3, and 40 yards as Catholic brought Wahoo back down to earth with a 38-10 defeat last Friday. Englehaupt and his buds will host the other Wahoo team this Friday when Neumann visits the Knights.

*Daniel Stohlman-Louisville - Ran for 156 yards and scored on a couple of 1 yard plunges, and also had a 34 yard scoring reception in the Lions 34-20 win over Omaha Concordia.

*Cody Feist-Yutan - "Benny the Jet" ripped Elmwood-Murdock for 178 yards on only 16 carries in the Chieftains 54-28 win. The Yutan senior, who ran for over a 1000 yards in 2014, has already rushed for 364 yards on only 33 attempts. "The Jet" has tallied 8 TDs in 2 games while averaging 11 yards a crack. Next time I play with the Glenn Miller Orchestra, I'm going to have bandleader Nick Hilscher call me "Bobby the Jet". Is that Ok, Cody?

*Nick Burger-Fremont Bergan - Took over the starting quarterback when Luke Kerkaert went down a week ago and didn't lose a step in the Knights 52-13 win over Freeman last Friday. Burger connected on 16 of 19 passes for 239 yards a 4 TDs in the romp. The sophomore's scoring tosses covered 6 yards to Robert Steed,a 27 yarder to Austin Otis,a 49 yarder to Steed, and a 41 yarder to Hunter Logemann. Burger opened the scoring in the game with a 59 yard TD gallop. Burger's backfield buddy, Logan Brandt added rushing TDs of 1, 15, and 57 yards in the win.

*Bladen Ahl-Diller-Odell - This dude missed most of last season with an injury but was apparently ready to rock and roll in the Griffins 44-12 win over Lewiston. The 5-10, 170 pound Ahl carried 17 times for 151 yards and scored 5 touchdowns on runs of 11, 7, 5, 17, and 3 yards. Bladen also caught all 3 passes thrown his way, good for 57 yards and also recorded 13 tackles on defense. Ahl also does the handles the punting chores, and returns all the punts and kick-offs. I did some checking and he does not drive the team bus.

*Gavin Bushkoetter-Lawrence-Nelson - Carried the ball only 5 times in the Raiders 20-8 win over Kenesaw and scored twice on runs of 35 and 48 yards. Gavin rushed for 153 yards for a nifty average of 30.6 yards a pop. Sure like to see him get that yards per carry average up.

*Jake Hubschman-Omaha Roncalli - Ran for 196 yards on a tiring 41 carries in a 29-15 win over Nebraska City. The 160 pound junior hit the end zone on runs of 71, 1, and 26 yards in the win. On both Hubschman's 71 and 26 yard runs, the slick running tailback took the handoff, bolted through the B gap hole, made a cut right, then another cut right to the outside, and simply outran the Pioneer defense. Jake had another pretty 37 yard run that featured some great cutting back against the grain action. Hubschman emergence is sweet because the kid didn't even receive a mention in some preseason capsules for Roncalli.

*Brock Wordekemper-Lincoln Pius X - Ran through the Omaha Benson defense for 209 yards on 23 carries and 2 touchdowns (9, 58 runs). The 185 pound junior benefits greatly from the line blocking of Alex Kerr and big Taylor Angele.

*Jake Waller-Kearney - Tore up Lincoln Southwest's defense with his 197 passing and 112 rushing yards Friday afternoon in the Bearcats 26-14 win.

*Trevor Nichelson-Ashland-Greenwood - In the Bluejay's 35-21 win over Syracuse, the speedy junior ran for 161 yards on 25 carries and made 11 tackles on defense. In just a little over 2 seasons, Nichelson has rushed for 2,787 yards. This season Trevor already has 367 yards on 59 carries and 5 TDs.

*Noah Vedral-Wahoo Neumann - Junior was instrumental in the Cavs 71-12 drubbing of Lincoln Christian. The outstanding junior completed 5 of 8 passes for 125 yards and 2 scores and rushed for another 126 yards on 8 carries and an additional 2 TDs. Vedral has been a sparkler through Neumann's first 2 contests, hitting 62% of his passes, not one pick, and no lost fumbles despite being sacked a few times. Impressive, Mr. Vedral.

*Jarrod Fedorchik-Bridgeport - Listed as a Guard, yet rushed for 188 yards on 27 carries in a loss to Chase County. The 175 pound junior is Bridgeport's leading rusher after 2 games and the Bulldogs have 2 time 1000 yard rusher Wyatt Pankowski in the backfield.......Huh?

..........and some other nice performances around the state: