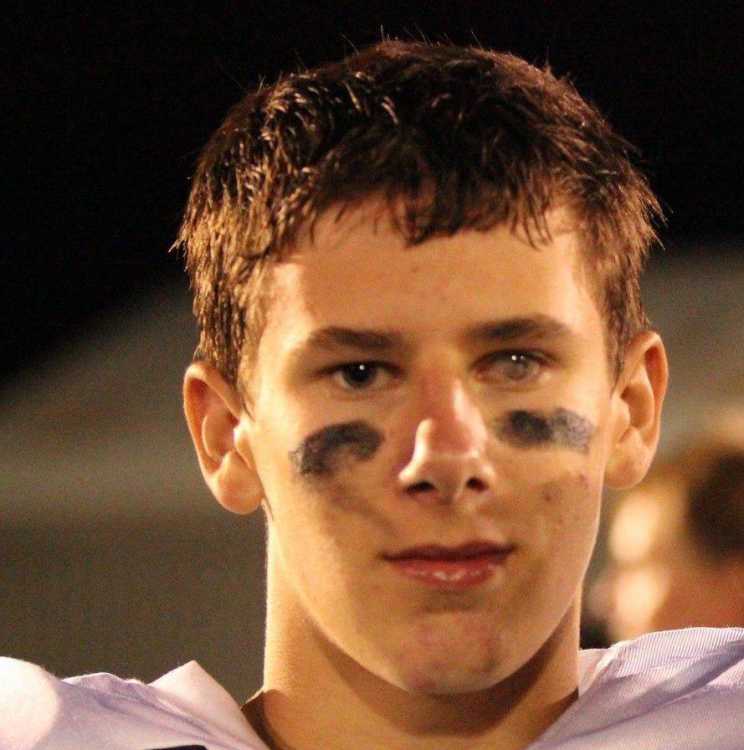 It was a hot time in the old town tonight, well, actually Friday afternoon in St. Edward for the season opener for both the Beavers and Hyannis. With temperatures hovering around 92 degrees and humidity that felt about the same, St. Edward spotted Hyannis a 12-0 lead, then reeled off 26 straight points en route to an impressive 44-18 victory. It was a crazy contrast in offensive styles, but in particular the fact the Beavers threw only 3 passes, all incompletions, coming very early in the contest.

Hyannis came into town boasting one of the best running backs in all the Panhandle in Gabe Haney. Haney, a swift, hard running 195 yard back with great power and sharp cutting ability, ran for 1,583 yards and 29 touchdowns a year ago, including a 2 TD, 88 yard rushing day in the 38-0 home opening win over St. Edward. Haney looked like he might be on track for a 300 yard rushing day yesterday when he bolted for 205 big ones on the first half, but some key adjustments by the Beavers snuffed out that idea in a hurry after the halftime break.

Haney made it look easy in the first quarter when he shook loose for 144 yards on 7 carries and touchdown runs of 40 and 61 yards. But it didn't take long for St. Edward to execute some key blocks from big Blake Merrell and Jesse Osantowski to shake those Beaver running backs loose around the ends. The clock was only 22 seconds into that 2nd quarter when speedy junior Keenan Rasmussen sped 48 yards for a score. Haney still had some good runs in that 2nd stanza, but the Beavers never let him break loose for a score.

Brandon Miller decided to outdo Rasmussen when he escaped for a 52 yard sweep for the game tying score with 1:33 left in the half. Miller's PAT kick (which is worth 2 points in 6-Man football) was short and the teams were knotted at 12 at the half.

It took only a minute 6 seconds into the 3rd quarter for St. Edward to take the lead for good and the go ahead touchdown may have been more mentally damaging to Hyannis than anything else. An 8 yard Brandon Miller touchdown may look simple on paper, but the incredible balance the 6-2 senior displayed on the run was an ego deflater for any defense. Miller scored again 4 minutes later on a 23 yard run to give the Beavers some breathing room, 26-12, but the sweet thing about it all was Miller actually booting the ball through the uprights for the 2 point conversion.

Hyannis ace Gabe Haney may have topped Miller's earlier TD effort with just 26 seconds left in the 3rd quarter when the all-state whiz turned a complete somersault in the air, landing in the end zone for a 4 yard TD. With 3 quarters in the books, we had a ball game with St. Edward leading 26-18.

The 4th quarter was a heat related nightmare for the Hyannis Longhorns. St. Edward effectively put the stops on Gabe Haney, while 210 pound Beaver defensive lineman Bryce Hoffmeister was making life miserable for Hyannis quarterback Austin Anthony, sacking the 6-2 senior four times. And with 285 pound Blake Merrell running down ball carriers, along with Jesse Osentowski, the 'Horns simply ran out of energy and confidence. With the Longhorn tank running on empty, St. Ed took advantage and made it a runaway with three 4th quarter scores.

Brayden Olson, a 5-11, 155 pound junior, added TD runs of 11 and 36 yards in the final stanza, and Keenan Rasmussen, who started the scoring for the Beavers, scored the final touchdown on a nice 69 yard sweep around the 'Horns tired defense.

The thing that made this game unlike any other 6-Man game I ever witnessed was the fact St. Edward struck to the ground game almost exclusively this entire football game. Never saw this before. If you've ever seen a 6-Man game, it seems nearly impossible to run the ball almost every single play. Following the 3 early passes, St. Ed quarterback Jonah Micek merely took the center snap and handed the ball off to either Rasmussen, Olson, or Brandon Miller. That is tough to do, friends, in this wide open version of football. But when you have lineman the size of Blake Merrell (285), Hoffmeister (210) and Jesse Osantowski, who plays much larger than his 175 pound frame, you can pull it off.

After my tweets following this game, I realized I had added only part of the final stats. So, after some addition, it was Hyannis Gabe Haney that led all rushers with 272 yards on 23 carries and all three 'Horn TDs. The Beavers held Haney to 68 yards in the 2nd half. St. Edward's terrific ground game was paced by Keenan Rasmussen's 168 yards on 8 carries and 2 scores. Braden Olson added 92 yards on 11 carries and 2 TDs, and Brandon Miller chipped in 82 yards on 6 touches and three trips to the end zone.

The Beaver defensive trio of Bryce Hoffmeister (17 tackles), Keenan Rasmussen (16 stops), and Blake Merrell (16 tackles) was simply outstanding on the steamy Friday afternoon. I was also impressed with sophomore Tanner Trube (#22) and his special teams play, seemingly making every tackle on kick-offs.

For Hyannis, QB Austin Anthony, Gabe Haney, and Bo Holthus combined to complete 10 of 26 passes for only 110 yards, suffering 2 interceptions. Hoffmeister and Rasmussen did the honors on the picks.

The Longhorns suffered from bad center snaps and some shoddy tackling plagued them all afternoon. I'm sure head coach Lance Braun will get those problems ironed out in no time.

I wanted to add something on a personal note here. St. Edward benefitted greatly this fall with the addition of a couple of young, super assistant coaches in Donny Baker and former Beatrice assistant, Darren Luebbe.

Luebbe came on board this summer and brought a ton of knowledge from a very successful Class B Orangeman program. And Baker? All you need to know is this. Bloodlines.

Donny Baker was an all-state TE/LB a few years back for the Beavers and probably the best 8-Man linebacker in the state. His dad, Woody, was a terrific player and 1000 yard rusher in his day for St. Edward. The most impressive piece of this Baker football family tree is Donny's grandfather, Don Baker.

In the early 1940's, Don Baker was simply a legend in football, basketball, track, and baseball for Genoa. The elder Baker, who is 90 years young and still living in St. Edward, was one of the best athletes Genoa ever had. Don Baker played and excelled in baseball AND basketball all over the state well into his 40's.

With the infusion of the young Donny Baker and Darren Luebbe, this Beaver squad displayed great football fundamentals in tackling, blocking, and just plain smart football technique. This 2015 St. Edward team might just be a pretty salty 6-Man squad.

Next Friday, the Beavers will welcome in Cody-Kilgore for a 6:00 Homecoming game while Hyannis will host tough Spalding Academy.