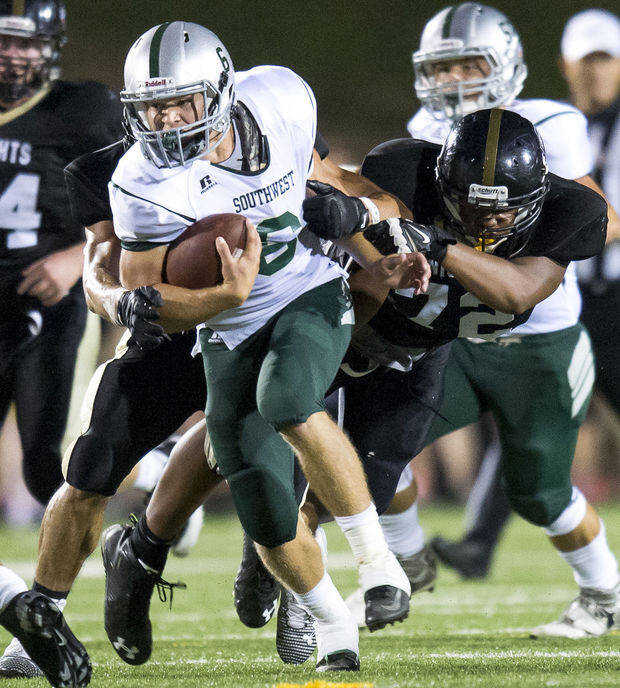 A junior running back, whose pre-season bio read "may add some depth at RB", not only opened the scoring for Lincoln Southwest, but buoyed a 3rd quarter rally that ended with the winning score in a hard fought 17-14 Silverhawk victory over Lincoln Southeast. Playing in front of a crowd that appeared to near 7,000 in the late starting nightcap at Seacrest Field, 190 pound junior RB, Braeden Hartwig looked like a seasoned veteran when he took the ball. Hartwig, in his first ever start, took the ball, turned the corner, and tore up the outside to the tune of 129 yards on 24 carries and the two touchdowns in the contest.

The two defenses flashed some expertise on their first trip to the field to begin the game and the 2105 season. Silverhawk defensive back Joseph Vampola, son of assistant coach Scott Vampola, pirated a Jack Strong pass on the Knights game opening possession into a stiff breeze. Southeast returned the favor on the 'Hawks first shot with the ball when DB Brady McDonald pounced on a Nick Lenners fumble after his 9 yard reception.

The Silverhawks got things going late in the 1st quarter when senior QB Bo Els nailed wideout Hunter Dowse with a perfectly thrown 48 yard pass. A few plays later, Hartwig swept around the right side for a Southwest touchdown with 3:57 left in that opening stanza. Jed Stonacek drilled the PAT through the uprights with ease against the stiff wind and the Silverhawks had a 7-0 lead.

A couple of possessions later, the Knights would answer despite 1000 yard rusher Martiez Prather being bottled up the entire 1st quarter. Austin Johnson, who replaced starting quarterback Jack Strong after the sophomore threw 2 interceptions, reeled off an 11 yard gain from the Southeast 35 to their 46. The very next play, Johnson dropped back, used the wind advantage, and lofted a perfect spiral that found a streaking Sterling Smith down the home sidelines. The ace receiver was not to be caught as he sprinted 54 yards to the promised land. Alden Bennett added the point after boot and things were knotted at 7 with only 1:22 off the clock in the 2nd quarter.

The teams took the 7-7 deadlock into their halftime locker rooms.

Lincoln Southwest moved their opening 3rd quarter drive to inside the 30 before Southeast held on 3 downs. On 4th down, Stonacek again flashed his kicking skills by booting a 31 yard field into the stiff breeze for the Silverhawks. Southwest again took the lead 10-7 with 9:19 left in the 3rd. But lightning was about to strike even though there wasn't a thunderstorm within 200 miles of Seacrest Field.

On the ensuing kick-off, Southeast running back Martiez Prather ran up on the kick but apparently misjudged it because of the wind. Prather suddenly stopped, watched the ball bounce, then scooped it up and waltzed his way through a stunned Silverhawk defense for an electrifying 84 yard kick return touchdown. In a quick-as-a-wink 12 seconds, Lincoln Southeast was back on top 14-10.

Prior to the stunning kick return the Southwest defense had made life tough for the all-state RB candidate. Prather, who rushed for 1,101 yards a year ago, had been held in check to 35 yards on 13 carries prior to the kick return. A season ago, Prather ran for 93 yards against Southwest in the season opener.

Enter the Silverhawks #22, Braeden Hartwig and his heroics at the 3:49 mark of the 3rd quarter from the Silverhawk 49 yard line. Hartwig took a pitch from Bo Els, swept to his left, then quickly cut up field when he saw Division 1 recruit Nick Lenners blocking in front of him. It was a twisting, turning, smashing 16 yard run to the Southeast 35 yard line. The next play, Knight DB Devon McClain was whistled for pass interference and the ball was moved to the 17 yard line.

The powerful legged Hartwig then ran for 5 yards, then 7, and finally going in for what would be the winning score from 5 yards out on a sweep left. With 1:25 left in that 3rd quarter, Southwest took a 17-14 lead, which would hold up for the victory.

The Knights did get something going on a drive that started on their own 13 with 6:42 remaining in the game. Southwest was called for holding, then QB Austin Johnson broke free for a 19 yard scamper, then Michael Wilson added 14 more to midfield. The drive however, was stalled when the Knights suffered an illegal substitution penalty and the Silverhawk defense stiffened.

Lincoln Southwest's Braeden Hartwig led all runners with those 129 yards and two touchdowns. Hard running quarterback Graham Garvin, who spelled Bo Els in the second half, chipped in 51 tough yards on 11 carries.

Southeast was paced by Martiez Prather's 42 yards on 17 tries. Nick Lenners led all receivers with 84 yards on 5 grabs. Hunter Dowse caught 3 passes for an additional 66 yards as Silverhawk quarterbacks combined for 145 yards on 8 of 15 passing.

Expect more out of Dowse this season, as he was targeted for 3 more throws in the game.

Lincoln Southeast QB's Jack Strong and Austin Johnson weren't far behind in the passing game, combining for 135 yards on 9 of 15 passing. Knight all-state candidate Sterling Smith caught two passes for 65 yards and a score while Prather ran under 3 tosses for 39 yards.

It was a game that lived up to it's billing. I was impressed at Southwest's ability to overcome some bad snaps in the game and put the mistakes in the rear view and continue on. Both of these squads should enjoy fine seasons and will be in the serious running for playoff appearances.

Lincoln Southeast will make a trip to Grand Island next Friday to face the 1-0 Islanders, while the Silverhawks will entertain Kearney, the 20-12 loser to GI. The SW/Kearney contest will be the 4:30 game next Friday at Seacrest.