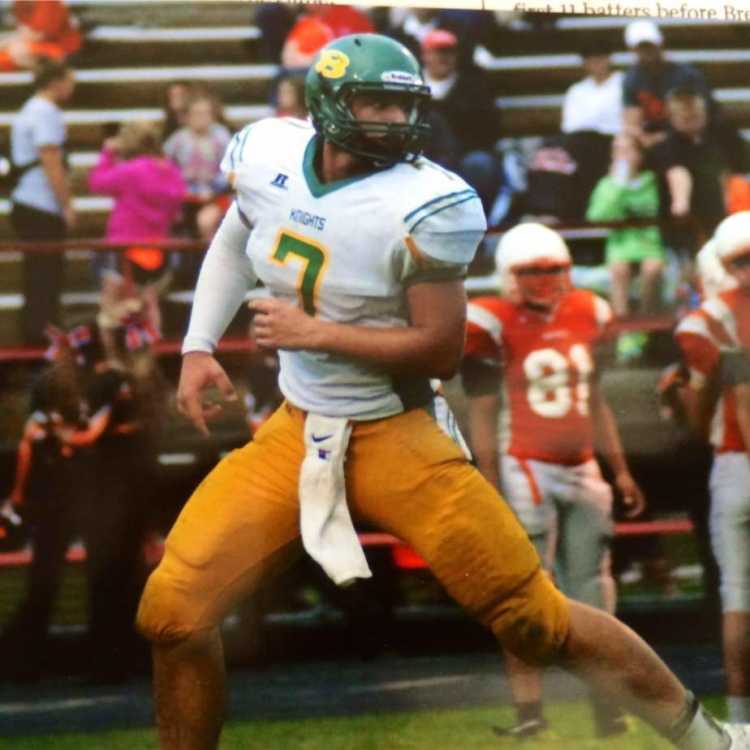 *Jacob Hoff-Bayard (#8) - 6-2, 195, (Sr.) - 131 of 257 - 1,549 Yards, 7 TDs (9 INT) - Big son-of-a-gun, man. Hoff has pretty darn good solid mechanics and is a very good 5-step, drop back gunslinger as well as a very good roll out QB. Jacob can throw the ball 20 miles in the air and with 51% accuracy. Really had unbelievable stats for a team that won only 2 games. Hoff won't run on you but is tough to sack because of his quick trigger release. 8 returning starters on offense and 7 on "D" will make the Tigers way better in 2015. And..... if you want to see a matchup featuring two of Class C-2's finest quarterbacks with very contrasting styles, pack up the kids and hit Gibbon's beautiful facility on Friday, September 4th.

This is also a gentleman that means business when he throws a pass. Big Luke connected his strikes at a 60.7% clip and has a rocket arm for a launcher. Let it also be noted that Kerkaert missed the entire Brownell-Talbot and Yutan games late in the season with an leg injury. Bergan needed him in that Yutan squeaker (21-12) too.

You want to see an outstanding all-state caliber linebacker, check out this guy. Luke may be the best hand-fighting, block shedding guy in C-2. Not exaggerating a bit. Also never saw a kid anticipate a quarterback count to get a head start on the play like Kerkaert. Suppose he knows a little about QB cadences? Yeah, I know he had 7 picks. Forget it, he is still a tremendous QB.

I wonder what would happen if Head Coach Seth Mruz would turn Luke loose with the aerials this fall? He did it against a fine 8-2 Malcolm squad and Kerkaert torched 'em to the tune of 26-40 for 329 yards and 3 TDs........and that's after a 2 week layoff for the big guy.

This fall, Snell has all-state WR Korbin Hynes coming back and all Hynes did was run under 56 of those Snell throws for 615 yards and 10 scores. Snell also has another outstanding receiver returning in Oscar Cuellar, who missed all of 2014 with an injury after starting the year before. The senior dual threat also has two very solid tight ends that can catch the ball in Cristian Tamayo (129 yards/1 TD), and Wyatt Kee (132 yds/1 TD).

No doubt about the fact Bradyn Snell is one of C-2's most electrifying players.

Mazour ran for his life at times last fall but still completed 50% of his throws enroute to a credible 5-4 year and a playoff berth. Tate has a fine returning running back in Brady Schuppan, plus Tom Pfeiffer. Mazour can run very well and the Cardinals, with that very good overall team speed should be pretty salty this fall. Brutal district though, with St. Cecilia and Sutton always lurking.

*Wyatt Zaugg-Yutan (#12) - 6-0, 170, (Sr.) - 69 of 125 for 887 Yds, 9 TDs, 6 INT. - Zaugg is a pretty well rounded athlete, being a very good quarterback and an honorable mention all-state basketball star. Wyatt boasts a 56% completion rate and is a 2 year starter that knows what competition feels like, facing teams like Aquinas, Fremont Bergan, and Freeman. Zaugg will have a terrific All-State RB in his backfield in Cody Feist (Benny the Jet) and some high caliber young players that should keep the Chieftains in contention for not only a playoff spot, but maybe a win or two in the postseason.

Zaugg is a smart field general and don't kid yourself, this Yutan football team is good, very good.

*Grant Schmidt-Hastings St. Cecilia (#3) - 6-2, 185, (Jr) - 46 of 77 for 862 Yds, 9 Tds - Just a junior, but capable of directing the Bluehawks all the way to the C-2 finals this year. Schmidt is a good sized lad that is a bullseye thrower who completes 60% of his tosses. With Dayton Sealey and friends in that St. Cecilia backfield, Schmidt didn't have to run a ton last season, but #3 will tear you apart if you forget about him taking off out of the backfield. You don't play quarterback for Carl Tesmer if you aren't capable of taking the 'Hawks to the promised land. Schmidt can do it.

*Korbin Hynes-Gibbon (#3) - 5-9, 145, (Sr.) - 56 Rec, 615 Yds, 10 TDs. (*ALL-STATE*) - If you are Braydn Snell's favorite target, you have to be special. A solid Class C-2 All-State selection a year ago, Hynes, all 145 pounds of him, is a dynamo on either side of the football and on special teams. On offense, he and Bradyn Snell form C-2's most feared QB/WR duo. Hynes can catch any ball thrown within his reach....great hands. On defense, Korbin knows where that football is every second of the game. This guy recorded 43 tackles a year ago, pirated 2 passes, recovered a fumble and knocked several enemy passes away that could have been touchdowns.

Hold on. Hynes may also be C-2's most feared punt and kick return man. Check this out. 12 kick returns with at 25 yards a pop and 8 punt returns at 30 yards a crack. That's a sky high 564 return yards in 2014, two going for TDs. You do not want Korbin Hynes bringing back kicks if you are playing Gibbon. Looks like another all-state type year for this kid.

*Travis Holcomb-Centura (#14) - 6-4, 210, (Sr.) - 29 Rec, 472 Yds, 4 TDs - Tremendous all-around athlete for the Centurians a year ago. Those 472 receiving yards came in just 6 games I think. Holcomb will be a shining star and a team leader for a young, young squad that was 1-8 in 2014. Holcomb is a standout on the hardwood and a fine 300 IH and triple jumper in track so there is no question about his athleticism. Hunter Casperson should be able to get those passes to him this fall which could push him to the 600+ receiving mark.

*Nick Goudie-Elmwood-Murdock (#) - 5-10, 155, (Sr) - 22 catches for 415 Yds, 2 TDs - Nick will once again be on the receiving end of Brandon Frates passes this fall and should at least duplicate his lofty statistics from a year ago. Goudie is also an all-state type punter, averaging nearly 42 yards a boot, along with being a very effective cornerback. As if that weren't enough, Nick Goudie is the Knights punt and kick return specialist. Don't tell he me also kicks off. The lad needs a breather once or twice a contest.

*Dalton Tremayne-Ponca (#1) - 5-9, 150, (Soph.) - 35 catches for 343 Yds, 4 TDs - All you need to know about this young man is that Wyatt Tremayne was his older brother. Of course Wyatt was a standout Quarterback and superior linebacker at Homer a year ago where he and Dalton played. Dalton transferred to Ponca this fall and will immediately add a super-charged boost to the Indians football team.

Young Dalton will be a shining star before his career is over and already has a heck of a head start. Tremayne made 67 tackles from his defensive secondary position and 46 were solos. Dalton also knocked away 5 passes (seemed like 25) in that Homer secondary and might have been one of the most dangerous kick return guys in all of NE Nebraska. Homer ran a kick return formation that almost looked like a rugby wedge that kind of waited for Dalton to receive the kick and reach that wedge. The wedge then moved as if in slow motion, hiding young Tremayne. Then before you knew it, Dalton would spurt though the wedge, using his 4.6 speed to fly past the bewildered defense. Pretty slick.

Dalton Tremayne is a safe bet to be an all-state pick before it's all said and done. Oh, and by the way, Dalton's father Randy played professional football for the Sioux City Stampede just last summer. How many high school kids in Nebraska can say their Dad played football the same time they did?