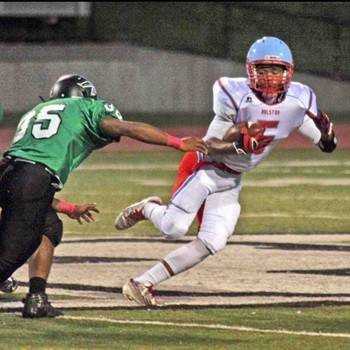 Three Class B runners that eclipsed the 1000 yard mark a year ago are back on the gridiron in 2015 including an Elkhorn South sensation that topped the magical thousand yard rushing mark as a freshman. That is a rare occurrence in Class B, or any class for that matter, so opposing defenses will grow weary of hearing the name Moses Bryant the next three seasons. Moses will strive to continue the success he enjoyed in 2014 as his Storm teammates enter 2015 as one of Class B's better squads.

Assumed the role of Go-To Back last season with big shoes to fill. It came as a bit of a surprise to many when coach Jason Fink called on Taylor Murph to fill the shoes of departed senior Isaac Wallace, a 2 time 1000 yard rusher, who moved on to South Dakota State. Up to that point, Murph had almost exclusively played quarterback position for Ralston, and that in a reserve role. Not only did Murph make the transition to running back, but the junior carved out 1,251 yards and 15 touchdowns rushing to easy Fink's worries.

The slender Murph has a lightening quick first step and gets to the hole in a hurry. For his size, Taylor Murph is Ram tough running between the tackles and possesses some of the best vision I've seen when he maneuvers through traffic. Number 5 plants his feet quickly and shifts directions in a heartbeat, using short strides. As Coach Fink put it "he can give a hip, and take away a hip quickly".

It took only two games a year ago for Taylor to get the RB thing down pat. The last 7 games of the season his lowest output was 125 yards rushing, and he ended the season with a bang, blasting for 257 yards on 26 carries against Omaha Roncalli. Murph also scored 4 touchdowns in Ralston's 35-3 win over Crimson Pride that evening.

Swift enough to run on Ralston's state qualifying 400 meter relay team, Taylor Murph truly has breakaway speed and can run away from most Class B defenses if he gets a step behind them. Surprisingly enough, the Ralston coaching staff wants Murph to work on his top end speed. That is a scary thought when the lad already flashes above average football speed although his fastest 100 meter speed is right at :11.6.

To say Moses Bryant plays the game of football well beyond his years is an understatement. Bryant became only the second freshman in 11-Man football history to crack the 1000 yard rushing plateau in this state. A couple of backfield injuries gave young Moses a chance to start a year ago and the speedy, fluid running freshman made the most of his opportunity.

After running for 175 yards through the first 4 games of 2014, Bryant exploded for 1,011 yards the final 6 contests for Elkhorn South and turned the heads of football fans around the state. Not only can Bryant run like a seasoned back, he is a constant threat to catch a pass out of that Storm backfield.

Blessed with 4.4 forty speed and tremendous cutting ability, Bryant has the kind of football smarts every coach dreams about. Elkhorn South loves to establish the run like most teams do and has had the backfield talent to move players like Bryant around so one player doesn't have to tote the ball 28 times a game.

Moses Bryant can be a slider and glider, but can certainly cut on a dime and change directions in a heartbeat. Very adept at cutting back against the grain, Bryant follows his blockers very well. Just not normal to see a youngster with this type of football maturity, especially considering the fact he didn't grow up in this country watching the game. If Bryant stays healthy, he will etch his name in the stone files of the greats who played the high school RB position in this state.

Elkhorn South did lose a very good group of seniors, but should reload and sport a very good defense and some quality lineman on offense to help spring Moses Bryant.

Last season was a shock for the Patriots with veteran head coach Bill Carlin deciding to step down. The venerable Spalding Academy graduate coached Adams Central for 24 years, compiling a record of 192-57, qualifying for the playoffs 19 times. Carlin nearly always had a 1000 yard back during those years and last season, a rebuilding one to say the least, it did not appear the Patriots would have one of those in the stable. The first 3 games of the season, junior Kyler Wormstadt did carry the ball plenty, but not like a normal Adams Central work load/go-to I-Back.

Through 3 games, Wormstadt compiled only 112 yards on 46 carries. To be honest, there just wasn't much blocking, which resulted in three losses for the Patriots. But in week 4 against rugged Scottsbluff, new coach Shawn Mulligan decided to give the ball to the 175 pound Wormstadt and it paid big dividends. The Patriots lost 36-16 but Kyler racked up 167 yards on 30 carries and scored twice. Adams Central had unveiled another 1000 yard running back. Wormstadt would go on to rush for 892 yards the final 6 contests and score six touchdowns.

Kyler Wormstadt is a typical tough running Adams Central back and with a season under his belt, head coach Shawn Mulligan and his forces should give Wormstadt more opportunities for the big yards this fall considering the fact AC has 15 starters coming back.

Johnston came very close to being Scottsbluff's second 1000 yard rusher a season ago as the Bearcats raced to a banner 10-2 season. Running in the same backfield with 1,500 yard runner Ty Benson, the 210 pound Johnston added the bruising yards Scottsbluff needed to go along with Benson's breakaway speed. Brad Johnson is money inside the 10 yard line and nearly automatic inside the 5. Blessed with tremendous balance and leg strength, #22 simply bowls over defenders like duck pins, scattering them in every direction.

For a big man, Johnston hits the hole in a hurry, taking the ball lined up directly to one side of the other of the quarterback. Nice quick, compact cuts when he needs them, the hard running Bearcat possesses enough speed to get downfield, gaining momentum as he goes. And Johnston is awful tough to bring down. Brad Johnston is also a brutal defender from his defensive end slot, as witnessed by his ability to shed blockers and rack up 55 tackles and a fumble recovery in 2014. Sure-fire All-State candidate this fall.

Here is one tough hombre, ladies and gentlemen. Pure football player. Jake picked up the slack a year ago in that Sidney backfield when 1000 yard runner Chance Anglin went down. Heeren put together back to back 200 yard ground games against Scottsbluff and Alliance and was a daunting figure coming out of the Red Raider backfield.

How would you like to see a 6-4, 225 pound steam liner rolling toward you with 4.5 forty yard dash speed? That had to be a frightening sight for any defense Sidney faced a year ago. When Heeren took the handoff and built a head of steam, the dude was just simply too difficult for one defender to bring down. Talk about yards after contact, good grief. On 4 occasions, in person, I watched as two tacklers grew to half a dozen before #4 was wrestled to the ground. Leg strength, plus power at the point of contact, Jake Heeren is pretty much nothing but money inside the red zone.

Heeren will be also be a force on defense this fall from his defensive end slot. If you also recall, the 6-4, 225 pound Red Raider was instrumental in leading Sidney to the Class B finals in basketball last March too. Jake was also good enough to grab a 2nd place in the shotput in Class B at the State Track Meet a few months ago.

And wouldn't you know it, Jake is one of the top punters in the state, averaging over 43 yards a boot. That's all-state credentials at the Punter position, folks. Would have been on my all-state team had it not been for the presence of McCook standout Bryce Lyons.

As I said, pure football, and pure all-around athlete. The Huskers might want to keep closer tabs on Mr. Heeren come late August.

Have to root for this kid, no doubt about it. And you also have to hand out high props to a wonderful single gal from Benedict, Nebraska who adopted this young man from the brutal West Humboldt Park neighborhood of Chicago back in 2011. The story is too long to tell here, but a single teacher and former successful junior college basketball coach and pure angel named Wendy Hirschfeld decided to take on parental duties of Emmitt Knight the rest is history......well almost.

You see, Emmitt Knight is a pretty darn good football player for these Gretna Dragons. Last season, the fleet footed junior ran for 775 yards and 10 touchdowns, plus catching 19 passes for another 223 yards and 2 more scores. Running at 180 pounds a year ago, Emmitt Knight ran out of the I-Back slot in the Dragon backfield. Knight does not hit the line as quickly as other 4.4 backs, but has the ability to accelerate into his 2nd gear when he gets past the first wave of tacklers, otherwise known as the defensive-line.

Emmitt is a subtle type of jitterbug runner, always looking for that outside route. And when he gets there, Knight is difficult to catch when he runs on that angle leading to the pylon at the corner of the end zone. #1 seems to hop out of tackles with his high stepping leg movement.

Look for more yards from this young man in 2015. Knight has an outstanding quarterback to work with in Jared Samuelson too. Mr. Samuelson threw for 1,309 yards a year ago, so his passing should keep defenses honest enough to spring Mr. Knight, who is 10 pounds heavier and just as swift this fall.

The Billy "White Shoes" Johnson of Nebraska Class B football. At a mere 5-5, and a buck 40, Connor "Super Gnat" Hudson is just plain tough to locate coming out of that Blue Devil backfield. Lined up 7 yards deep behind Plattsmouth's quarterback, Hudson just bursts through the opening so rapidly, he is weaving his way downfield before the defense catches a glimpse of #1.

Connor Hudson owns tremendous football speed. Not many, if any in Class B defensive backs will run Super Gnat down if he breaks free. This lad can stop on a dime and regain his speed in an instant. Stop and go expert for sure. Hudson averaged 7.28 yards every time he touched the football and alternated with his classmate Gage Orten at the RB position.

Not sure about Plattsmouth's plans for the two running backs, but Connor Hudson will be a force in that backfield in any case. Better not blink, or #1 will be on his way to the end zone before you can pivot and run him down.

Other backs to watch:

Another back toiling for a team that hit the win column only once (against winless Schuyler). Played in 8 games a season ago.

Alternated with Connor Hudson at the RB position for the Blue Devils. Actually had carried the ball in only 7 games in 2014, but was also a standout at linebacker for Plattsmouth, accumulating 58 tackles. Pretty decent kick returner too.

Seacrest's 9 touchdowns came in Sidney's first SIX games. Tough nosed football dude who made 70 tackles for his middle linbacker position. Six of those were for lost yardage. Should play a bigger role on offense for the Red Raiders in the fall. Also a good receiver out of the backfield.

Ran for THREE touchdowns in the Huskies playoff loss to Scottsbluff. May be in line for more rushing yards in 2015.

Watch out for this kid. State 138 pound Wrestling champion for the Red Raiders as a freshman. He ran for 156 yards on 6 carries in a 48-0 win over Gering and scored 3 times. On defense, he played enough in the defensive backfield to log 28 tackles with an interception to boot. All this as a Freshman in Class B.