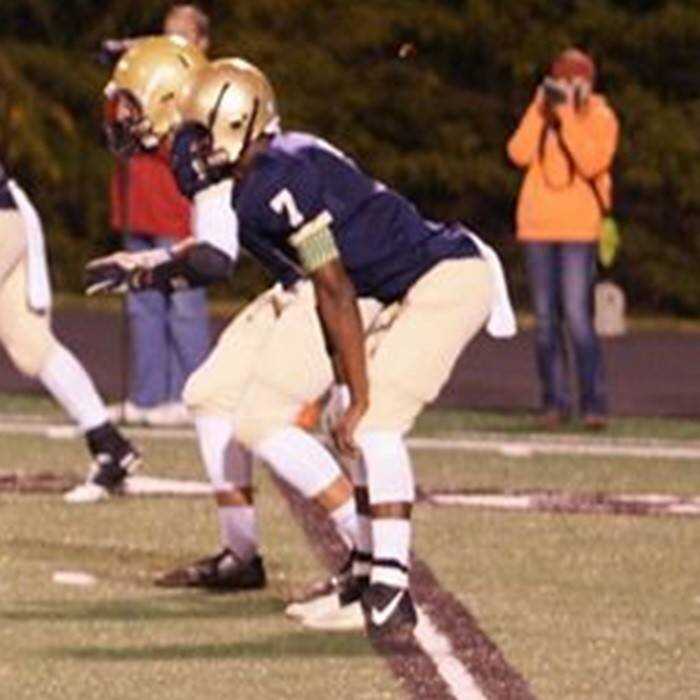 According to Jewish biblical history, an 80 year old man named Moses raised his staff and parted the Red Sea, leading his Israelite people out of Egypt. That was in the late 1300 BC's.

Now, a gazillion years later, in a land with no seas in sight, a just-turned 15 year old lad from a land 5,531 miles away from Elkhorn Stadium is parting another type of "sea". With a "sea" of blockers leading his way, it is a sight to behold.

And such a young lad.

Moses Bryant came to the United States at the age of 7 via the long route........The Republic of Sierra Leone, South Africa. Bordered by Guinea on the north-east, Liberia in the southeast, and the Atlantic Ocean in the south-west, the country is about half the size of Illinois. Like any other small lad growing up in Sierra Leone, Moses Bryant played soccer. That would soon change.

The first year Bryant was in the US, his new parents wanted him to try our version of football. During the fall of his 7th grade year playing middle school football, a 13 year old Moses apparently caught on to the game and was hooked for good. Just a short 24 months later, the Elkhorn South football staff inserted the name "Moses Bryant" on their 2014 varsity football roster. The Sierra Leone transplant was just 14 years old and not even old enough to drive.

In a 42-0 win in the 2014 season opener against Omaha Gross, Moses Bryant took the ball for the first time ever in a varsity football game. Lined up to the immediate left of QB Collin Point, Moses took the handoff, nearly bobbled it, then skirted around the right side for 15 yards, slipping two tackles in the process. Bryant would go on to carry 4 more times for 62 yards and snare a pass for another 6 yards.

The following game, a 27-14 win over Bennington, Bryant carried only 3 times for 10 yards. But the following week, a 42-0 win over Omaha Benson, Moses Bryant's 7 totes for 75 yards and two TDs may have helped mature the youngster. The next week Bryant touched the ball only 5 times for 28 yards, but had a rushing score in the 45-14 romp against Norris. The win, however, was costly for Elkhorn South as starting star running back Chad Carlos broke his arm. Ace junior back Connor Childs, another standout runner, was banged up too. That meant a 14 year old freshman who didn't even have a drivers license, was going to have start against Ralston and compete with the big boys in Class B's toughest and most brutal district.

Three days after Moses Bryant celebrated his 15th birthday, the 175 pound 9th grade runner stepped into a starting role and rushed for 175 yards on 17 carries, scoring all three touchdowns in a 21-14 win over Ralston. The last touchdown, an electrifying 63 yard dash with less than 5 minutes left in the game, sealed the win for the Storm. The next 4 games Bryant's lowest rushing game was a 152 yard, 3 touchdown effort the following week vs. Elkhorn Mt. Michael.

After running for 175 yards and 3 scores the first four games in a reserve role, Moses Bryant exploded for 1,011 yards and 14 touchdowns the final 6 games of the season. Not only that, but the freshman sensation caught 9 passes for 239 yards and 2 more scores. The highlight of the season had to be in the Storm's season finale against Gretna. After going undefeated the first 6 games of 2014, Elkhorn South dropped their next two games, one to rival Elkhorn, the other to eventual Class B state champion Omaha Skutt. Then came Gretna.

Facing the last unbeaten team in Class B in that regular season finale, the Storm bolted out to a 35-14 lead before Gretna rallied to tie it at 35 with a little over 2 minutes remaining. With the clock reading less than 2 minutes left in the game, Moses Bryant caught a 10 yard crossing pattern pass and cut back against the grain, streaking 76 yards down the sideline for what would prove to be the winning score. Toward the end of that contest with the Storm trying to run out the clock, Bryant caught another pass. Gretna defenders charged toward the freshman, trying to force him out of bounds to stop the clock. But the young 15 year old kept his balance, used his senior like strength, and stayed in bounds to keep the clock moving. That play may have just defined what this Moses Bryant is all about.

Bryant went on to run for 178 yards on 10 touches and 2 score in that Gretna victory, plus snaring 3 receptions for 132 yards and another 2 scores. Bryant also became the first Class B freshman in history to surpass the 1,000 rushing mark in that game, and only the second 11-Man back in history to turn the trick. The rest is recent history as Bryant and his lineman, Shane Henderson, Dixon Loeffler, Brandon McDonald, Brett Stinson, and James Morgan carved their names in Nebraska prep football history.

Moses Bryant and his 1,186 yard Freshman season is in the books. What lies ahead for Coach Guy Rosenberg and his Elkhorn South football team is three more wonderful years of having this outstanding, humble, hard working young man in the backfield.......and on the edges......and in the defensive backfield.....and any other spot they wish to insert him. To watch this kid play the game is similar to watching a modern day Moses parting the Red Sea, only these Friday Night seas are green. Moses honestly plays with the intelligence of a senior and possesses moves to match.

The Freshman sensation can line up in the Storm backfield or split out with the other wide receivers. Blessed with 4.4 speed and powerful bursts when he encounters contact, Moses Bryant always seems to be at full speed when he hits the line of scrimmage. The way he cuts back against the grain with his glassy smooth glides, he appears as if he is parting the deep waters and creating waves......waves of tacklers grasping thin air. To play the game with the actual smarts of an 18 year old senior that has 6 years of organized school football under his belt, is difficult for me to comprehend. You just don't see this kind of thing very often, especially at this level of football.

I'm sure this thought may have crossed the mind Elkhorn South head coach Guy Rosenberg. "How do I keep this special talent focused for THREE more years?" But I'll tell you something. This man is a smart coach.....really smart. Rosenberg knew exactly what he had when he watched Moses Bryant come up through the middle school ranks. He will have no trouble keeping this sterling young man focused. Only injuries, a lack of line blocking, or a change in offensive style will prevent Bryant from being a 4 year thousand yard rusher, unheard of in Class B. And a lack of blocking "ain't" likely happen at Elkhorn South. The recruiting will begin to get hectic in a hurry as far as Bryant is concerned and that could factor into staying focused for Moses, but Rosenberg and his staff are too smart for that to become a distraction.

The opening game of the 2015 season is only around 50 days away. Watch Moses and his blockers part the Green Sea. This young man needs no staff, no miracles, just blocking. Moses is a special player and all of Class B knows it. But the slides and the glides, the keen vision, the razor sharp cuts, the stiff arms, the sweet cut backs, the efficiency, the juggling catches and the crunching blocks to spring a teammate........defines #7, Moses Bryant of Elkhorn South.

He was born to part Green Seas of Nebraska, otherwise known as high school football fields. He has......and he will.