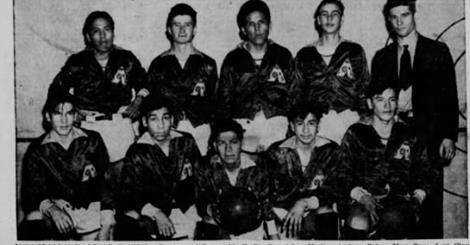 75 years ago a high school basketball team from the Winnebago Indian Reservation charged into Lincoln Nebraska like a raging, prairie dust devil cyclone and came away with a State Basketball Championship. On a snowy St. Patricks Day in 1940, a team without it's top all-around athlete overcame the doubting odds of the big city sports cynics of that era and came away with a Class B State Title.

A team of nine young men, playing out the cinderella role, never let the clock strike midnight, never losing the glass slipper enroute to a 4 game survival of the fittest that resulted in that school's only state basketball championship.........ever. None before, none since.

75 years later, nearly to the day, a storied basketball team from that same reservation will be on it's way to the Class C-1 State Basketball Tournament in Lincoln. Same gig, different hotel, but in a sharply contrasting electronic age where nothing is hidden, thanks to the magic of the Internet. But there is something eerily similar to the current Winnebago basketball team and the Ruben Whitebeavers, Jack Wolfs and Eugene St. Cyrs of that 1940 season.

The same shroud of mystery surrounds this current group of fearless young men that enveloped that 1940 Winnebago Redskins squad. Despite all the statistics, game film, and scouting reports of this age that did not exist 3 quarters of a century ago, no high school sports mortal really knows what to make of this modern Winnebago Indian basketball team.

This 2014/2015 'Bago squad rambled through the current season like that 1940 team, mowing down everyone from the 3-21, Class D-1 Allen's to the mighty, tradition-rich Norfolk Catholic Knights of the C-1 world. But it's the Indian's lack of competition in C-1 that has left the Doubting Thomases of high school hoops with comical cynicism.

Still, this current Winnebago team was ineligible to play in the 2015 state tournament prior to entering sub-district play. The NSAA rule states that in order for a team to participate in it's class state tournament, it must have played at least FOUR games against teams in that class. In the Indian's case, that would be C-1. Prior to it's opening sub-district game, Winnebago had played only TWO C-1 schools, Wisner-Pilger and Norfolk Catholic.

The Indians would have to beat Wisner-Pilger AND Wayne (as it turned out) just be eligible to gain entry into the upcoming 2015 Class C-1 Big Dance.

The rest is history, but a mysterious dark cloud still surrounds this magnificent, running, gunning, sharpshooting team from northeast Nebraska, primarily due to it's small school scheduling in the Lewis and Clark conference.

This current Winnebago basketball team may have served quiet notice a year ago when it gave Fremont Bergan a huge scare before falling to the Knights, 65-58 in a C-2 District final. This season, led by the high leaping Wingett brothers, Matthew and David, and the locked and a loaded deadly 3 point wizard named Zay Medina, the Indians have struck fear into Class C-1. In a class fortified by Centennial conference powers like Wahoo Neumann, Grand Island Central Catholic, Columbus Scotus, and Lincoln Christian, the Wahoo's, Chadrons, and Fall City's of the C-1 world are there to spook the new kids on the block. But will the bright lights of Devaney Sports Center send it's spirits desending down on the nerves of this upstart group of kids from the proud Winnebago nation?

A quick look back to the Wisner-Pilger Holiday Tournament around Christmas of last year and what transpired the following January 1st and 2nd at Midland College in Fremont actually cleared the picture a bit.

'Bago swept through a usually strong Lutheran High NE team, a 16-10 C-1, Wisner-Pilger squad, and a powerful 21-5 Battle Creek group, to take home the hardware. In fact, Winnebago crushed Battle Creek in the finals by a convincing 75-63 count. The next week at Midland, the Indians crushed a very, very good Hartington Cedar Catholic team, 82-64 before dropping a heartbreaking 54-46 championship game to Fremont Bergan.

The vicious rebounding, fast breaking, deadly accurate boys that had been doubted by many, made it be known they would back down to nobody. The Indians, who love to run and run, then run some more, would not be pressed again this season. Following the Archbishop Bergan loss, not one team, including Norfolk Catholic (twice) has come within 13 points of the Indians. The average margin of victory in that stretch was 76-47.

But once again, the shroud of mystery descends on Winnebago because of their relatively "easy" schedule. That dark, ominous cloud though, becomes less threatening to many who have seen them play. They love to run, and this youthful, fearless group takes running to a different level. The Indians are long, quick, and can leap like gazelles and if you can't keep them in front of you in transition it may be a long game for any C-1 opponent in Lincoln this week.

6-4 Sophomore David Wingett leads Winnebago with 18.4 ppg, followed by older brother, senior Matthew Wingett, who is dropping in 14.8 a contest. A Houdini-like sophomore, Isiah Medina, also averages in double figures, scoring at a per game pace of 10.6. This basketball team subscribes to the old Jim Karhoff way of thinking. Karhoff, who coached a 1960 Polk to an undefeated, Class D-1 state championship, subscribed to the "every shot is a rebound to yourself" philosophy. And that 1960 Polk team could have competed in Class B that year and beaten most teams in the state, if not all. They were that good.

The hard-to-the-glass rebounding Indians snare boards after shots and either put it back up, or quickly turn and nail the now-you-see-me, now-you-don't Medina, who pulls his lightening quick trigger release and drains a trey from downtown. In the first Norfolk Catholic game, David Wingett connected on 8 of 9 field goals, pulled down 6 boards, had 6 steals and blocked 2 shots, while scoring 27 points.

Against Laurel-Concord the first time around, Matthew Wingett scored 24 points, pulled down 11 rebounds, dished out 3 assists and had 2 steals. The ice water veined sophomore Medina has averaged 4 treys in the Indians last 6 games and is lightening quick, elusive, and a nightmare to guard. 6-4 junior Coby Smith had scored 13 points, grabbed 10 rebounds, blocked 2 shots, dished out 3 assists, and had 3 steals vs. 21-5 Battle Creek, a state tournament qualifying team.

The "quiet" member of the team, 6-2 senior Cory Cleveland, is as slippery as it comes, contributing when opponents least expect it. Anything but quiet in huge games, Cleveland came through big time against an undefeated Bancroft-Rosalie team. In 'Bago's 94-58 laugher against Bancroft-Rosalie, Cleveland drilled 21 points, had 6 rebounds, and dished out 10 assists. In a win over sub-district foe, Wisner-Pilger (16-10) Cleveland scored 23, had 5 boards, 10 assists, 2 steals, and a block.

The Indians have drawn Wahoo in the 1st round, a game that will open the C-1 State Tournament festivities in an early morning 9 AM matchup. On the same side of the bracket is a Chadron team that is short on height but also loves to run but is lacking a big man. Also, a team that could pose problems to the Indians on that side of the bracket is Grand Island Central Catholic. The Crusaders deliberate style of play and suffocating defense has brought many teams to it's knees and the inside play of rugged, nimble footed Wyoming football recruit, Yohanna Ghaifan, could pose matchup problems for 'Bago.

I cannot recall a more anticipated presence of a team in recent years that that of these Winnebago Indians. Can this team, tabbed a Cinderella team by many, fight their way through the toughest class, top-to-bottom, in the state of Nebraska? Will this team succomb to nerves when it hits a stage it has never seen before? The last appearance in Lincoln was in 1994, and before that......1941. And the year before? That Winnebago Redskin Class B title team of 1940.

Will Winnebago be able to relive that run that took place 75 years ago when stars like Jack Wolf, Ruban Whitebeaver, Eugene St. Cyr, Neil McCluhan, and Levi Claye took it upon themselves to replace their all-around star Lewis St. Cyr, who turned 20 right before state and was ineligible to play? Will the halftime magic of a 7 year old dancer named Lightfoot Blackfish, a Hochunk dazzler who drew fans away from the Creighton Prep/Fremont game to watch that magic, come back to life in Lincoln this week?

Can this group from Winnebago, tabbed as the David of the Class C-1 field duplicate the magic of that snowy tournament three quarters of a century ago?