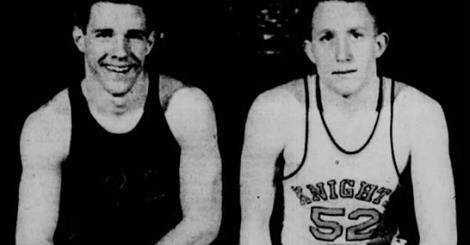 I'm going to throw you a curve ball here and it was not my wish to do when I started this project. My access to these all-state teams is stuck at 1976. They will be in my possession shortly, so until that information arrives, I am going to take this journey back to 1960 and work ahead, covering the years leading up to the starting point of my project....1964. By that time I should have that priceless information spanning the years of 1977 to the present time.

Now, the 1960 State Basketball Tournament and what transpired in Lincoln that season. Remember, things were still going strong at the NU Colesium as far as the finals were concerned.

*In Class D, a team won the state championship that does not even exist today. Tiny Garland, located just bit north of Malcolm and a little west of Seward, defeated Amherst 48-42 at the NU Colesium. Garland had a male enrollment of only 18 but EVERY boy in school went out for basketball. Honest to goodness truth. The Panthers ended a perfect 21-0 to go with their perfect student particpation basketball numbers. 5-11 senior Don Beckmann was, without a doubt, the shining star for Garland that state finals day, scoring 29 points and 21 of his team's first 25 to get things started in the "D" title game.

Amherst never recovered as Beckmann was all over the court, stealing passes, blocking shots, and cleaning rebounds off the glass. Garland ran over everybody they played except Uehling in the district final.

*In the Class C, a 23 year old head coach guided Seward Concordia to an easy win over Niobrara in that final 55-36. The youngster from Texas had just added a state baseball championship while coaching Concordia the previous spring. Seward Concordia jumped on the Northeast Nebraska team 17-5 after the first quarter and never looked in the rear view mirror after that. Concordia had a schedule dotted with Class B teams in 1960. Very Balanced team.

* The Class B final was a game matching defending State Champ Syracuse against perennial powerhouse Omaha Holy Name. It also pitted super stars Neil Nannen of Syracuse and Holy Name standout, Chuck Sladovnik. There were no better players below Class A than these two lads, but it was Syracuse that built an apparent insurmountable 20 point lead in that title match. Syracuse led by 20 with 4:33 left in the 3rd quarter, but the 6-4, 195 pound Sladovnik was nearly unstoppable in that closing 12 and a half minutes, playing with 4 fouls the entire time.

He took over in that 2nd half, moving outside from his usual post position, drilling long range shots to nearly pull off the improbable comeback. Sladovnik finished with 27 of his team's 53 points as Syracuse took the 55-53 win. Neil Nannen, who fouled out with 2:47 in the contest, led the Rockets with 21 points. Nannen lost the battle with Sladovnik, but won the game and with it, the Class B crown for the 2nd straight year.

*Class A's title game Omaha South made amends for their 10 point loss to Lincoln High in the 1959 state championship game by whipping Lincoln Southeast, 53-47. It was the Knights 1st ever appearance at the Big Dance and their main objective was to attempt to shut down South's supeman, Bill Vincent. Southeast did "hold" the 6-8 phenom to 17 points, but teammate Wendell Wiksell picked up the slack with his 17 tallies. Lincoln Southeast's burly 6-2, 200 pound senior, Keith Sieck took game honors with his 18 points. 10,000 fans witnessed the evening session that featured the Class B and Class A battles. Ron Kellogg Sr. father of Ron Kellogg Jr. (Kansas FB) and Ron Kellogg (former Husker football player) was also on this team plus a little 5-7 guy named William Rose Jr. who could dunk a basketball without too much trouble. You see, basketball boys of this current day and age......there were small players that could dunk back in the day.

*The standout on this group was State "D" Champion Garland's Don Beckmann. EVERY player on this team made the All-State Class E team in 1959 except Indianola's Phil Krous. Yes, there was a Class E as late as 1959.

*Huskerland Prep Report's Bob Jensen would be proud of Arnold's Paul Croghan. After all, Jensen is an Arnold grad. Croghan owned the court for Arnold, scoring at a 26.3 ppg clip and grabbing 22 boards. The 6-2 whiz also scored 40 points on three different occasions. Her is something to think about. Brainard head coach Ernie Behne said that his star player, Larry Riha was the most impressive athlete in that area since Bob Cerv. Yeah, THAT Bob Cerv, former Major League Baseball star.

Seward Concordia's Bredow simply led his team to the Class C state chamapionship....that's all. A very good rebounder and playmaker, Bredow was also a clutch shooter when it mattered most for the Raiders. And Linn Johnson could just falt out put the ball through the cylinder for Elkhorn's state semi final squad. In the 2 state tourney games, Johnson scored 35 and 22 respectively.

Milford's Schirmer played much taller than his 6-1 frame.

*Well, we certainly know about the feats of Bobby Hohn and Chuck Sladovnik, so let's shine the light on the remaining Class B all-staters.

Minden's Bjorkland compiled a unique record during the 1959-1960 season for the Whippets. Warren scored 415 points and pulled down an identical 415 rebounds. Think about it. 21 ppg and 21 boards. Pretty solid, Jackson.

*The remaining two players that were not selected to the overall All-State team that were on the Class A Dream Team were Omaha South's Kamphuis and Omaha Central's John Nared. Both Kamphuis and Nared were members of the 1959 Class AA all-state squad. The AA class was dropped after the 1959 season but nevertheless, the two were good enough to be repeat selections. Kamphuis was a perfect compliment to Bill Vincent for the South High Packers. He was nearly as good a rebounder as was Vincent despite the fact he was FIVE inches shorter. If it hadn't been for Gerry Kamphuis and his 20 boards against Alliance in the 1960 semis, South may not have pulled out the 58-56 win over the Bulldogs.

Nared was definately the sparkplug for Omaha Central's 1960 team who nearly knocked off South twice that year.

*Back in this day there was probably no more noteworthy basketball family than the Nannens of Syracuse. Neil was the 4th brother to standout on the hardwoods for the Rockets, and the 3rd to be named to an All-State squad. Older brother Lyle Nannen was an all-state selection in 1954, and brother Gene was a Class B all-state player in 1959. The 6 foot 4 inch Neil Nannen was just a magician with the ball. His dribble drive wizardry and clever faking maneuvers near the basket were a sight to see. And don't let that 6-4 frame fool you, Nannen could be effective from the outside and could jump like a gazelle.

The other non Class A player on the squad was Omaha Holy Name's Sladovnik. I saw Sladovnik play against Columbus St. Bons that season and left the gym in awe. At 195 pounds, you just didn't dare even think about pulling down a rebound when he was in area. A vicious rebounder, Sladovnik was also a deadly shooter inside, as well as outside. The firey 6-4 Rambler poured in 40 points against Ralston for his season high.

The basketball only player that stood out the most to me on this team was Omaha South's Bill Vincent. The 6-8 Packer may have been the first player I saw in high school that had....AND USED....a sweet hook shot. Nearly impossible to defend, the shot was usually money if Big Bill was in position. Vincent could also go outside the paint and drain 'em with steady accuracy too. Bill Vincent just simply directed Coach Cornie Collins' Omaha South team to a state title in 1960. Vincent was very, very heavily recruited his senior season and ended up earning a letter for Nebraska in the 1962-63 season. Sadly, Bill was killed in an auto accident after his junior season for the Huskers. He was driving a bread truck when he lost his life. Sad.

How special was Lincoln Southeast ace Keith Sieck? The 6-2, 200 pounder didn't even join the Knight basketball team until January after recovering from a football injury. Sieck not only led Southeast to the state tournament but led all of Lincoln in scoring! This guy was a long range shooting specialist and would have been even more prolific had there been a 3 point shot in 1960. Sieck was also a rugged rebounder and a vicious defender. By the way, Lincoln SE was only in it's 5th season of existence in 1960. Hard to imagine.

Easily the most impressive all around athlete on this team was the incomparable Bobby Hohn of Beatrice. Twice all-state football and basketball, the Beatrice Bullet won 4 all-class Gold Medals at the State Track Meet and set a state record in the 180 Low Hurdles. Hold on....we're only getting started with Bobby's feats.

Hohn went on to to be named Athlete-of-the Year in both the Lincoln Journal-Star and Omaha World-Herald in 1960. In the Shrine Bowl that summer, Hohn was named Most Valuable Player after rushing for 171 yards and 3 Tds.

Bobby played football for Nebraska from 1962-64 and was named captain his senior year for Bob Devaney's Huskers. Hohn was on three Husker bowl teams and went on to play in the NFL and was the starting cornerback for the Pittsburgh Steelers from 1965 to 1970.

Probably the greatest athlete Beatrice ever witnessed, the great Bobby Hohn was diagnosed with Lou Gering's disease in 1999 and lost his battle in late November of 2003. Bobby was inducted into the Nebraska High School Sports Hall of Fame in 2001.

Back to his 1960 basketball skills, the most impressive thing about it was the fact Bobby led his Beatrice team to the 1959 Class A title and was the only returnee the Orangeman had after Hohn's spectacular teammate and all-state buddy, R. Brown lost his life before the 1960 season began.

There may never be another from Beatrice the likes of Bob Hohn. I was deeply saddened when I heard of his battle with ALS in 2000. Not many like Bob Hohn.