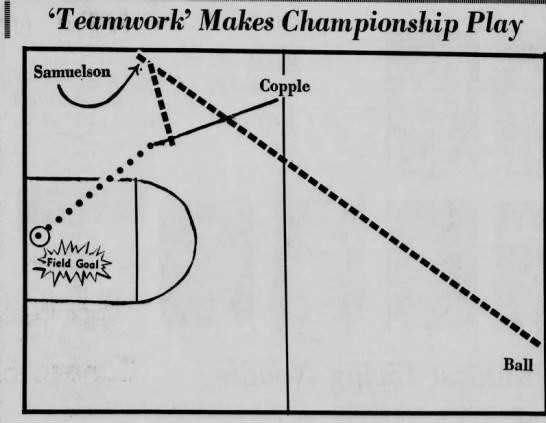 Now, I present to you the 1971 All-State Basketball teams as chosen by the Lincoln Journal-Star. But first, here is how each class played out in 1971:

*In Class D, Benedict's defensive wizards swept to the title by putting the stops to Hildreth's high scoring offensive juggernaut by a 53-45 count. The Eagles finished 25-0 to earn the distinction of being the only undefeated team in the state of Nebraska. And it was sweeter yet because Benedict had not even qualified for the state tournament in the past 30 years, dating back to 1941. Benedict's defense was so clean and it sent Hildreth to the free throw line only 15 times in that championship game while the Eagles were busy connecting of 19 of 29 shots from the charity stripe.

Bendict entered the tournament as the fields lowest scoring team, but defense wins games, folks and the Eagles proved he point in 1971.

*The Class C championship went to Pawnee City, who was led by an absolutely marvelous head coach by the name of Larry Ribble. The Indians turned back Elkhorn 49-43 for the title to finish the season 25-1 after going 26-0 the season before. 51-1 over a 2 year span.....not bad Coach Ribble. All-stater Roger Theimann came through for Pawnee City, but it was freshman Steve Glenn, who came in after senior starter Kendall Binder went down with a serious eye injury in a practice prior to districts, that was a shining star.. Binder's eye injury required surgery and Glenn stepped in his first game and drilled a 20 spot for Ribble's team and started the rest of the way through the championship game. That's just the way it was for Pawnee City in '71.

*In Class B, Cozad's bid to win a 2nd straight state "B" title fell short when Fairbury's fabulous sophomore Bob Siegel calmly sank two free throws in the waning moments to put Fairbury ahead for good, 65-64. Cozad did have two more chances, but turned the ball over both times. The Bill Ramsey coached Haymakers, making their THIRD consecutive appearance in the "B" finals, actually outrebounded Fairbury, but Coach Charlie Moore refused to think his Jeffs were out of it. The Siegel boys, sophomore Bob, and junior Tom, led Fairbury not only to the state championship victory, but also to a heart pounding 81-80 win over Aurora in the semis. That, my friends, was one golden coaching macth-up between Cozad's Bill Ramsey and Fairbury's Charlie Moore. Ironically, both were inducted into the Nebraska High School Sports Hall of Fame in 2011. So well deserved. Two of the very best ever.

In Class A, nobody will ever, ever forget Lincoln East's Scott Copple and his 20 foot shot at the buzzer to lift the Spartans to a 74-72 over Papillion and 6-10 center Mike Heck. I thought the building was going to explode at the NU Coliseum that day. It was like a bolt of lightening hit the place. What a match between East's Kent Rekeway and Papio's big Mike Heck. It was Coach Dennis Hanson's Monarchs, the kings of the 4th quarter comebacks in 1970-71, that staged a furious 2nd half rally after trailing by 13 at the break. Papio actually drianed the clock down from 41 seconds to 11 ticks before calling a time out and mapping out a play to get the ball to the 6-10 giant, Heck. As time ticked away, Monarch guard Steve Fleming had the ball in the deep corner, but as he turned along the baseline, he stepped on the on the end line and turned the ball over to Lincoln East with 2 seconds left.

Here is how the next 2 seconds played out. East's Jack Ball took it out underneath the Papillion basket. He heaved the ball the length of the court but was off target and the pass was headed out of bounds. Had it not been touched, it would have been Papillion's ball. But......East's sophomore center, Rick Samuelson leaped from inbounds into what seemed like the 3rd row to me, and flicked the ball blindly back into play. Copple came from nowhere on an all out, dead run, scooped the ball up after one bounce and in one fluid, frozen in time motion, let it fly. The ball sailed through the hoop like it had been suctioned through by a reverse tornado. BANG! History!

I can still see the shot today. How blessed was I, and all who were in attendance, to witness that. I'm relatively certain Papillion wasn't too thrilled.

*Lincoln Journal-Star Prep Sports Writer Virg Parker placed 3 juniors, a very unusal move, on the Class D All-State team and all 3 were deserving. But it was State Champion Benedict's Richardson that led this group. The senior was a sparkler in Lincoln, averaging 26.3 ppg during his 3 day stay there. All tolled, the 6-2 all-star scored 434 points during 25-0 campaign (21.7 ppg) and was the state champs top rebounder. Litchfield's Bacus was one tough hombre, garnering all-state football honors as well. John Bacus was a splendid back for the Trojans and averaged 22 ppg not only his season on the hardwood, but for his entire 3 year hoops career at Litchfield.

Adams Kim Veerhusen was also one of the most dead-eye shooters of his day. After averaging 22 points an outing during the regular season, Veerhusen peaked during districts. He exploded for 53 points in an Adams 117-87 triumph and scored 49 points in 2 state tournament appearances. This will not be the last you hear of Mr. Veerhusen. And Earl "The Pearl" Spitsnogle was simply a paint dominatind jim-dandy. Spits hit 57% of his shots during the year and averaged 25 ppg, twice exceeding 40 points in a game. Mead's junior star, Mike Couch, led his team to an unbeaten season until they lost at state. Although Couch usually played in only half of the game due to big leads, he averaged 21 ppg and pulled down 14 rebounds.

*I'm biased here, man. Bob Martin was the "Man" on this team, but of course I'm a football dude. Martin was the all-state fullback selection and used his lightening quickness on the court to intimidate opposing defenders with his slick hands, body positioning, and hustle. Martin, whose David City team faced 11 Class B scholls during their 14 game slate, averaged 21.3 ppg and snared 200 boards thorughout the season. The red headed 6-4 Thiemann led Pawnee City in scoring in both of their state title seasons, making 52% of his shots. His favorite shooting spot was the deep corner and Thiemann hit 23 ppg when it counted.......in the Indian's 3 game state tourney drive to that 2nd title in as many years.

Wesolowski led the Elkhorn Antlers to the state tournament all 3 years he started and to the finals his sophomore and senior campaigns. Big Jake scored 848 points during his career and was a rugged rebounder for Coach Gene Kruger's club. Ansley's Elton Roland, although an unselfish player for Coach Dale Sampy's team, still poured in 27 ppg for the Warriors on 56% shooting. Tallest of the dream group was Sutherland's Paulman. The 6-6 pivot man knocked in 193 of his 307 field goal attempts for the Sailors, good for 63%.

*This is just plain and simple, a pretty impressive group of athletes. Aurora's Kropp, an all-state football choice again (as well as basketball), averaged a hefty 32.7 ppg during his senior season and dropped in 80 points in two state tournament games in 1971. The rock solid, 225 pound senior scored 57 points in a game in '71 and scored 1,488 points during his career at Aurora, leading the Huskies to a 66-18 record during that 4 year stint. Laurel's Erwin, a Class B repeater from a year ago, scored 21 ppg and grabbed 12 rebounds while leading his Laurel Bears back to the state tourney after a runner-up the previous year. Steve Erwin was definately Laurel's quarterback on the basketball floor, orchestrating the fast break. Erwin did it all.

Arlington's Tom Anderson was an impressive player indeed. A Class C selection in 1970, Anderson's team moved up a class in 1971 and the 6-4 senior never missed a beat. He averaged 20 ppg during his senior season and cracked the 1000 career scoring barrier with his 1,089 points. It was the 6-4 Anderson who was called on often to bring the ball up for Arlington to break a full court press. And Cathedral's Howard.....just plain fun to watch. The 6-7 dandy 468 points for 21-2 Omaha Cathedral and Coach Roger Higgens stated Howard may have been one of the easiest players to coach ever. Hilary also cleaned the glass to the tune of 335 for his career.

And Bob Siegel! What can you say? A sophomore that is 6 feet 5 inches tall and weighs a solid 200 pounds and scores an amazing 501 points after dumping in an unheard of 499 as a FRESHMAN. Good Lord. Of course you know, this article will not be the last you ever hear of the fantastic Mr. Bob Siegel. Not by a long shot.

One player that stands out the most and DID NOT make this team is GICC's Gary Schmidt. The all-around splendid athlete that was good at anything he tried, finished 2nd in Class B to Aurora's Tom Kropp with an 24.8 ppg scoring average. Had GICC not gone 12-9, Schmidt probably would have made this dream Class B team. Gary, wrong place in time, my good friend. Those who knew the sport knew how good you were.

*Plain and simple. Awful difficult to beat the feats of Lincoln East's Kent Reckeway. At the time, State Tourney records were kept in 4 catagories, and Reckeway had his name in all 4 marks. During the 1970/71 regular season the 6-1 senior scored 472 points in 18 games for a 26.2 ppg average. He scored 46 against Hastings in the Trans-Nebraska Conference Championship game. During the state tournament, Reckewey averaged 39.3 points a game. In the opener against Alliance, he dropped in 45 points (a single game record) and made 23 of 25 free throws...another mark. Reckewey scored 35 in the semis versus Hastings and added 30 in the finals against Papillion. In the championship game, he tied the single game field mark with 16, and set a state tournament scoring record with his 118 points in the 3 game span. Top that.

Hastings Thomas was one of the state's best rebounders and his patented turn-around jump shot in the paint was a thing of beauty. Thomas hit 186 of his 326 field goal attempts, and not always from short range, while hitting 57% of those shots. Columbus ace Klutman led the Discoverers in scoring, steals, assist and rebounding....is there anything else? He averaged 18 ppg for Columbus.

Omaha South's Cunningham could play anywhere on the floor and did just that for Packer Coach Cecil Stutzman. The 6-3 star started out at forward, then moved inside to play a double post. Cunningham was such a great ball handler that Stutzman finally switched him to guard where he could handle the ball all the time. Cunningham ended up averaging 19 ppg and 12 rebounds for the year. And then there was Mike Heck, a the giant of his day in 1971. He certainly one was of the keys to Papio's march to the state finals and his 11 2nd half buckets nearly pulled the Monarchs to the win that afternoon.