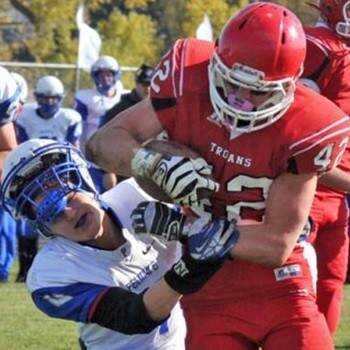 These two teams clashed to begining the year and now they will end the season facing each other with a State C-2 Championship on the line. You have to wonder if either coach visualized this being the scenario when the season began, but Aquinas has been in this position the past 13 years, including the past three C-2 title games. The Monarchs lost to Doniphan-Trumbull 32-14 last year, but won the C-2 crown in both 2011 and 2012. Cedar Catholic has been in the C-2 playoffs the past 15 seasons, grabbing runner-up in 2001 and 2009.

Both of these excellent teams are coming off highly impressive semi final wins. Aquinas scored on their first 5 possessions to hand Battle Creek it's first defeat of the season and send the Braves into basketball season. Not many who follow high school football ever dreamed Battle Creek losing before they reached Lincoln. All Cedar Catholic did was travel to Oakland-Craig and shutout a Knights team that had throttled a very good North Platte St. Pats squad 41-21. In the process the Trojans shut off one of the finest runners in the state in Nick Arlt to the tune of 87 yards.

One has to wonder in amazement when thinking about Aquinas head coach Ron Mimick. An undersized Columbus Scotus player who was all guts and heart......and all-state football, Mimick has been at the Monarch helm 24 years, compiling a record of 212-64. Coach Mimick has guided Aquinas to 20 playoff appearances, winning 5 state titles which include C-1 in 1993, '94 and '97, and as we mentioned, C-2 in 2011 and 2012. In all, Mimick has had this club in the playoffs 20 times, won those 5 titles, and 2 runner-up finishes. And the venerable Coach Mimick does with with NO star status players, very seldom a 1000 yard rusher, and rarely a player over 200 pounds in the starting lineup.

This season Aquinas' offense is guided by QB and 3 year starter Trev Semrad. Only 5-8' and 145 pounds, Semrad already has one state championship under his belt, leading the Monarchs to a title as a sophomore in 2012. Trev's older brother Trey quarterbacked Aquinas when when the younger Semrad was a freshman and I have a feeling Trev learned a thing or two from his older sibling. In addition to being an outstanding QB who knows the offense inside and out, Semrad is also a very good defensive back and is the team's place kicker and punter. Semrad just doesn't miss extra points by the way......41 of 42 is the stat.

On defense, a unit led by one of the best defensive minds in the state in Tony Smith, Aquinas is led by a trio of linebackers that are simply the best in C-2. Mitch White, Trent Smith (Tony's son) and Lane Napier are as good as it gets, compiling an eye-popping 307 tackles between the trio. Not a misprint. The Monarchs also have two of the top lineman in C-2 in Matt Kindler and Trev Steager.

This defensive unit allowed only 7 Tds during the regular season and just flow to the ball like a swarm of angry killer B's.

And is there anything left to say about Hartington Cedar Catholic? Are you kidding me? This Chad Cattau coached football team is sprinkled with so many fine football players it makes your head spin. They also have a defense that flows to the football, creates turnovers, and can flat out change the complexion of a game in the blink of an eye. On offense you have a 2 year all-state basketball player running the offense who is a converted wide receiver and also a player who never missed a beat at his new position.

Senior James Kaiser runs the show and knows the offense, improving with each game this fall. Kaiser has thrown for over 1,200 yards and is a game changer from his defensive back position also. Running back Ryan Becker, a three time 1000 yard rusher, is as punishing a runner I have seen this season. Becker also leads the Trojans in tackles from his linebacker slot. Cedar also has one of the best 2 way ends in 11-man football in Tristan Steffen.

Hartington CC's dominance of Oakland-Craig is still an eye opener considering the fact the Knights quarterback Cole Mitchell was back and healthy for that game, along with the imposing Arlt at running back. Consider this stat line for Mitchell. Prior to that game, the O/C signal caller had just returned the past 2 games to complete 20 of 33 passes for 421 yards and 7 Tds. Against Cedar Catholic, the Trojan defense held Mitchell to 13 of 27 passing and forced him into 4 interceptions and only 142 yards and NO POINTS to show for the night. That's how efficent this "D" unit plays.

When the game commences on Tuesday morning, there could be as many as 9 all-state Class C-2 football players on the Memorial Stadium turf participating in this game. Does that tell you anything about whether the best 2 teams are playing for this championship? If this baby is anything like the opener in David City, the state is in for a real treat and a clinic on how to play the game of high school football. This one could be a game for the ages.