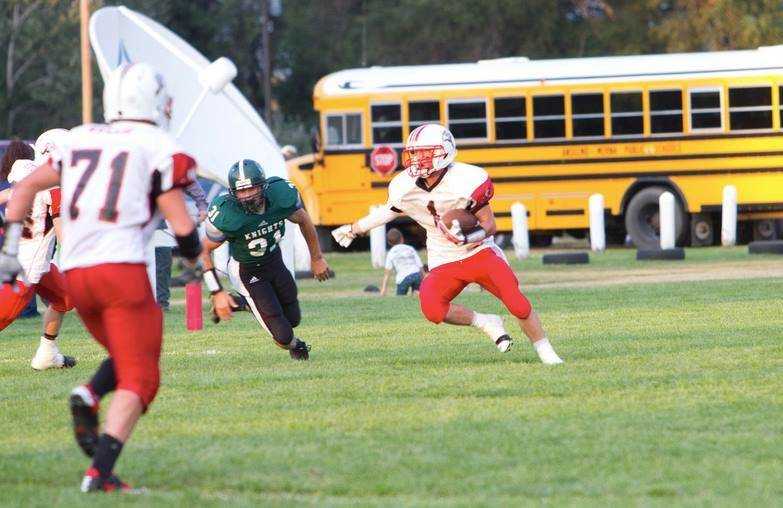 The Buffaloes took advantage of 5 Creighton turnovers to take down the #1 seed Bulldogs. Elm Creek's Christian Best overcame a leg injury to rush for 189 yards and a touchdown in the win. The stout Buffalo "D" held the high powered Creighton offense to 250 yards in the game and advanced to the semis to face unbeaten Hemingford in a Monday road match-up.

Hemingford's Ethan Skinner blasted his way to 342 yards on 34 carries and 5 scores as the Bobcats continued their march to Lincoln. Fullerton, hampered by all-state RB Garrett Sonderup's foot/ankle injury, could never get going and just couldn't hold back Skinner and the Hemingford line. Skinner, unofficially reached the 5,744 career rushing mark in the frigid afternoon contest. The Hemingford defense was so staunch it nearly held Fullerton to under a hundred yards of total offense for the day. The Warriors managed only seven 1st downs for the game.

Guardians Angels took over a back and forth game in the 4th quarter, scoring the final 26 points of the contest to take the win over the surging Bulldogs. The Bluejays overcame 6 turnovers and 234 yards from Friend 2 year 1000 yard back, Zemua Baptista. West Point GACC's Tanner Hass returned to the field after missing nearly the entire season, and returned a kick-off 75 yards for a score to give his team a 28-26 lead, their first of the game. WPGACC never looked back and Hass went on to amass 250 yards, leading the Bluejays to a semi final road match-up against BDS. Guardian Angels had nearly 460 yards of total offense for the evening.

Finally back at full strength, BDS rode the arm and legs of quarerback Grant Norder to the victory over penalty ridden Heartland. The Eagles took a 24-14 lead midway through the 3rd quarter, then held off the Huskies charge for the win. Heartland has their chances late in the game, but were hampered by the penalties. Norder ran for 136 yards and passed for another 133 to pace the Eagles and set the tone for the game by escaping for a 64 yard Td run of the contest's 2nd play. Jordan Heinrichs, a 4 year starter for Heartland, led the way for the Huskies with scoring runs of 1, 37 and 9 yards.

In a classic battle of 8-Man heavyweights, the defending state champion and #1 seeded Timberwolves rallied with 2 touchdowns in the last 6:44 seconds to take the 2 point victory. It looked like Exeter-Milligan might be in trouble when hard running 5,000 yard career runner J J Oltmer scored on a 17 yard run to put the Flyers up 26-14. Oltmer, who scored all 4 St. Francis Tds, rushed for 275 yards in the game. Even when the Timberwolves were up 28-26, reserve St. Francis QB Weidner drove the Flyers all the way from their own 19 to E/M's 28. But on the game's final play, 2 time all-state player Kyle Jensen jetted in front of a Flyer receiver at the goal line to pick off the sophomore QB's pass and preserve the win. Jensen, who has been the offensive star all season for Exeter-Milligan, finished the night with 157 yards on 29 carries and 2 Tds. Jensen also had 8 tackles on defense. Exeter-Milligan will have a rematch with Falls City Sacred Heart next Monday at home. The Timberwolves won the October 10th game going away, 46-20. JJ Oltmer finished the night, and his career with 270 yards rushing on 31 carries.

Sacred Heart capitalized on 4 Kenesaw fumbles, turning every one into scores in a wild 62-46 scoring fest at Jug Brown Stadium in Falls City. The Irish, who had 11 first downs compared to Kenesaw's 24, never trailed in the game but had to hold off the running of the Blue Devil's junior QB, Preston Schnitzler. Schnitzler rambled for 295 yards, his 3rd straight game over 200, and scored 3 Tds. Sacred heart's twin 1000 yard rushers, QB Austin Malone and RB Sawyer Keen each ran for over 170 yards in the game. Keen, who ran for 1,534 yards a year ago, missed some time early this fall with injuries and is back peaking at the right time for Doug Goltz. Kenesaw, who finally had both Schnitzler boys back healthy, made a great run in 2014. Preston will be back next season for the Blue Devils.

Trent Geiser and Troy Gilligan, both thousand yard runners, led the Coyotes past Sandhills-Thedford this afternoon. The Knights, who gave A/M all they wanted in a 34-29 loss back on October 3rd, couldn't get sophomore QB Jacie Nutter's passing game on track with the strong, icy winds howling out of the North. Geiser rushed for 188 yards on 35 carries and 3 scores, while QB Geiser went over the 1000 yard mark for the 2nd time by bolting for 144 yards on 29 carries and 2 scores. Anselmo-Merna charged to a 28-0 halftime advantage and never looked back. Gilligan and Geiser also had 11 tackles each on defense. Anselmo-Merna will travel to Maxwell next Monday in the Class D-2 semi finals.

Maxwell turned things over to the amazing Jaylon Sturdivant and the do-it-all senior responded with a whopping 378 yards on 46 carries and 4 touchdowns. The Wildcats avenged a September 12th 30-27 loss to Garden County and advanced to D-2's Final 4. Garden County sliced the Maxwell lead to the final count of 32-28 with less than 5 minutes on the clock in the 4th, but the amazing Sturdivant pounded his way through the Eagle defense to drain the clock for the win. Sturdivant has rushed for 2,643 yards thus far in 2014. State record is 2.971.