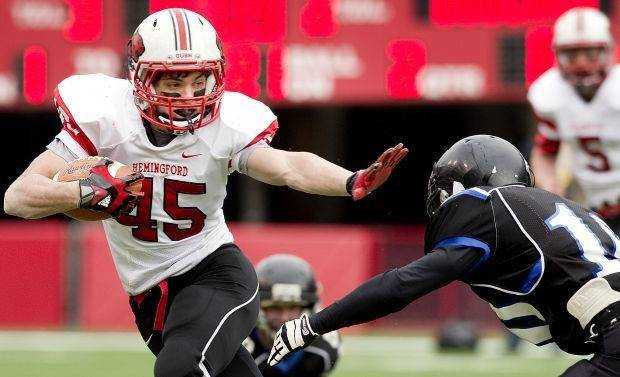 In a battle of undefeated Class D-1 football teams and a head to head clash between two career 5,000 yard rushers, Hemingford saddled up senior Ethan Skinner and rode the 195 pound college football prospect to a 56-6 quarter final win over Fullerton.

Just as the Bobcats did a year ago in the semis against Overton when they gave Skinner the ball 52 times for 325 yards, Hemingford just fed the ball to #46 and let him follow his talented line.

On a frozen football field that resembled Lambeau Field in Green Bay, Hemingford pulled away from a 22-6 halftime lead, exploded for 26 third quarter points, and shut the Warriors football season down with a sad ending.

Ethan Skinner pummeled the Fullerton defense for 342 yards on 34 carries and scored 5 touchdowns, 4 of them coming in that 3rd quarter explosion. Fullerton's incomparable Garrett Sonderup, hampered by a serious foot injury, gutted out the entire game but just couldn't get untracked against the swarming Bobcat defense. Sonderup, whose status was up in the air since last week's Amherst injury, just couldn't ignite his flashy, quick start and execute his sweet cuts. But it was the almost "all-star" Hemingford defense and Skinner's running that proved the difference on a day when the wind chill struggled to make it to 5 degrees above zero.

It was ironic. On Hemingford's first play from scrimmage, Garrett Sonderup broke through the Bobcat line, met Ethan Skinner head on, lifted him and planted him on the frozen Fullerton tundra to a 1 yard gain. Before the half was over, Skinner had his way with the Warrior defense to the tune of 190 yards on 23 carries. Sonderup looked his "normal" self on his 3rd carry of the game, sprinting for a 23 yard gain, but reinjured his foot on the run and seemed even less able to go after that on offense, while playing well on defense.

Hemingford pushed across the only score in the first quarter when powerful fullback Brady Turek took one in from 18 yards out with 5:54 remaining. After a failed 4th down conversion by Fullerton in their own territory, the Bobcats scored again with 5:32 left in the 2nd quarter when Quarterback Matt Wood snuck in from the 1 yard line. 56 seconds later, Sonderup picked up a Hemingford fumble and rambled 55 yards for a score, cutting the lead to 22-6. That is where things stood at the halftime break.

Hemingford basically put things away in the third quarter when Ethan Skinner scored touchdowns on 3 out of 5 carries in a span of 3:52 seconds. Skinner followed the crisp, powerful blocking of Asa Carlson, Denton Payne, Tanner Benge, and Colt Foster to TD runs of 25, 15, and 65 yards. On the 2 longer runs, Skinner took the ball straight into the heart of the Warrior defense, was nearly stopped, but did a flashy spin and simply outraced the Fullerton defense to the end zone.

With 4:46 left in the 3rd stanza, Fullerton could feel their unbelieveble season slipping away, trailing 40-6. Skinner would tack on yet another score on a 10 yard run to extend the lead to 48-6 with 1:24 remaining in the 3rd quarter. Just like Fullerton had done on so many occasions the past 3 seasons to their opponents, the 35 point running clock kicked in and signaled a sad conclusion to the Warrior football season.

Just 11 seconds into the final quarter, Hemingfords Matt Wood picked off a Will Meyer pass and sprinted 39 yards to the house for the final Bobcat score, making it 56-6.

For Hemingford the march to Lincoln and another appearance in the D-1 finals continues. This team is clearly on a mission and looks awfully focused right now. With a defense that resembles an 8-Man all-state team, it is difficult to see this group going down. Let me introduce you to this relentless, swarming defensive group of Bobcats:

Maybe the best 8-Man defense in the state.

For Hemingford, it was Ethan Skinner leading the way with 342 yards on 33 tries and 5 Tds. Unofficially, Skinner now has 2,290 yards and 42 Tds for the season. His career rushing total swelled to an amazing 5,744 yards and 108 touchdowns. Fantasy numbers.

Garrett Sonderup unofficially had 53 yards on 12 carries and ends his storied career with a 2014 rushing total of 2,324 yards and a career total of 5,683 yards. Sonderup has drawn comparisons to Cory Eikmeyer of Dodge, who is the career rushing leader in Nebraska with 8,330 yards.

Hemingford will return home to face Elm Creek, who went up to Creighton Tuesday and stung the #1 seeded Bulldogs 30-8. Game day is next Monday, November 17th with the winner advancing to Lincoln for a D-1 Finals appearance.