Fullerton guts it out with 40-39 playoff win over Amherst. 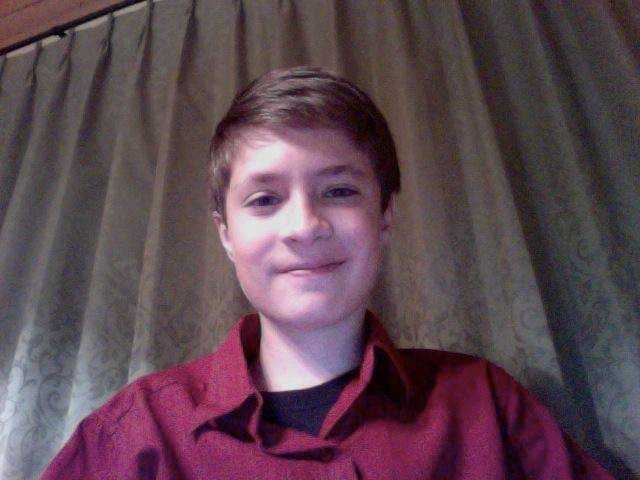 Fullerton's Josh Wetovick should be smiling after 3 interceptions against Amherst Wednesday night.

The undefeated Fullerton Warriors had to do something Wednesday night they haven't had to do all season. Play without all-state, 2,015 yard rusher Garrett Sonderup with the game on the line. The Warriors dug deep to pirate 3 Trey Taubenheim passes in the final 4:58 seconds of the game to hold off the hard charging Broncos.

Fullerton made it look easy in the 1st quarter, turning the sensational Sonderup loose for 3 touchdowns and 3 double point conversions and a 24-0 lead. Another Sonderup touchdown with 6:31 left in the 2nd quarter stretched the Warrior lead to 32-0 and it looked like smooth sailing for 9-0 Fullerton. But when Sonderup went down with an injury with 3:29 left in the half, things would never be the same for Fullerton.

Coming in to tonight's contest, Fullerton head man Ryan Haughton knew this Amherst team would be a test. Slippery quarterback Trey Taubenheim, a 5-10, 175 junior, had started heating up the last 2 games for the Broncos. Taubenheim completed 30 of 48 passes for 499 yards in games against Burwell and Ansley-Litchfield, throwing for 9 Tds with NO interceptions. But I wonder if Haughton had any idea Amherst coach Ron Evans would have his sharp shooting junior take to the airways 42 times in this 2nd round playoff game? Things may not have been so critical for the powerful Warriors, but when you not only lose your star offensive player, who just happens to be your defensive leader as well, the intestinal fortitude of your football team comes into play about as big as it gets. So here's how things played out on a night where the loser goes home and checks in the football gear for the season.

Fullerton gets the opening kickoff, starts from their 15 and 4 plays later Garrett Sonderup performs his usual magic and scores on a 33 yard TD jaunt. 2 plays prior, the 185 pound sensation breaks loose for a 26 yard dash to set up the score.

Amherst responds with a nice 13 play drive that fizzles at the Fullerton 13 when junior Josh Wetovick picks off a Taubenheim pass. 5 plays and 57 yards later Sonderup makes it look easy with a 32 yards TD run. 16-0 Fullerton.

Fullerton would get the ball back after an Amherst punt. 3 plays later Sonderup breaks loose for a 33 scoring yard burst. Fullerton 24-0....33.3 seconds left in the opening quarter. The stands are filled with Warrior faithful thinking "2nd half running clock", an all too familiar scenario when the Warriors take the field.

Garrett Sonderup escapes for a 26 yard dash with 6:31 left in the 2nd and it's 32-0 and the route is on right? Amherst quells some of those thoughts by constructing a nice 65 yard drive culminating with a 4 yard TD pass from Taubenheim to junior End/DE Ty Hadwiger. It's still a 32-8 Warrior advantage. No cause for alarm, right? Hold on.

On a 2nd and 9 at the Amherst 37, Sonderup spins one way, takes a pitch and is swarmed by Bronco tackers after a 3 yard gain. The 5,000+ yard career rusher doesn't get up. The entire crowd goes deathly silent as Sonderup is helped off the field. Etch it in stone, man, 3:29 left in the 2nd quarter, 32-8 Fullerton lead. Replacement Josh Wetovick is stopped cold on a 4th and 1 at the Bronco 29. The opportunistic invaders from the west take full advantage and march down the Fullertonall turf to score with :13.7 seconds left in the half. A Trey Taubenheim/Ty Hadwinger pitch and catch does the trick. Fullerton 32-14 at the half.

Amherst makes an immediate statement to start the 3rd stanza when the speedy junior Breyden Eckhout fields a kick-off at his 4 yard line and takes off untouched on a sweet 74 yard journey to the promised land. 18 seconds off the clock to start the second half and it's suddenly a 12 point Fullerton lead at 32-20.

The Fullerton trainer wraps the outside of Sonderups with tape, says he has turf toe but can play and Haughton sends him back on the field with a slight limp. 2nd play Sonderup is loose again on a 32 yard blast from his 33 all the way to the Amherst 15. Two plays later, Garrett Sonderup bolts around left end for an 8 yard gain and hits grass with pain, this time much worse. The cog that makes this Fullerton team go is helped off the field and is done for the night.

The Warriors do score 3 plays later on a 6 yard Seth Wetovck run to extend thir lead to 40-20, but now Fullerton had to play defense. 9 minutes, 28 seconds of the 3rd quarter and all of the 4th remained.......with no Garrett Sonderup.

The 4th and money quarter was a splendid test of never-say-die wills.....Amherst on offense and Fullerton on defense with their back against the dreaded "lose and you go home" wall.

The Warriors do march nearly the length of the field with some gutty running by QB Will Meyer but the swarming onslaught of the Amherst defense stuffs the drive at the Bronco 10.

Five plays, 70 yards, and the Broncos are down by only 1 when Taubenheim finds Eckhout for a 44 yard TD strike. On the all important, crucial extra point, Amherst cooks up a little trickery. Lining up for a point after kick attempt, the holder takes the snap, picks it up and tosses over his head blindly as sophomore QB Trevor Adelung fields the perfect pitch, runs left but meets up with 6-4, 215 pound Fullerton DE Gage Horacek and is promptly stopped in his tracks. The tie is averted by the Warriors and it's still 40-39 Fullerton.

The final 10:30 seconds couldn't have been scripted any better by a Hollywood screen writer. Amherst stops Fullerton, is driving down the field and Josh Wetovick comes up with his 2nd interception at the Warrior 38. Tragedy averted.

The Amherst defense is relentless, led by Devin Dibbern (#20), Hadwiger and Taubenhiem. But Fullerton gets a break at the Amherst 10 yard line when big Tyler Prososki picks off a pass right then and there. The Bronco defense says NO when Eckhout intercepts a Will Meyer pass in the end zone and takes over at their 15 yard line.

The very next play, Taubenhiem finds a streaking Breyden Eckhout for a 42 yard gain to the Fullerton 23. We're hitting crunch time here as the clock has drained down to 1:48 in the game. 3 plays later, Josh Wetovick pirates his 3rd pass of the game and saves a touchdown at the Warrior 4 yard line.

Fullerton just has to eat up the final 1:36. They have one time out as does Amherst. The brutal Amherst "D" stuffs 3 straight running plays and calls time out. Now things get interesting. 39 seconds left in what might be your season if you can't get the punt off. The normal long snapper..........Garrett Sonderup. The 2 previous snaps to the punter for the Warriors have been short and this time Fullerton coach wanted to make sure the snap was true. Sonderup limps back on the field, centers a good snap to Tyson Hellusch who boots the ball all the way to the Amherst 26.

Game over right? Are you kidding?

Clock reads 28.4 seconds. Taubenheim misfires on a pass. Now it's down to :19.4. Next play Taubenhiem connects on the throw to Eckhout who then executes the Hook and Lateral to Devin Dibbern. Dibbern goes all way to the Fullerton 28.

:10.5 remains on the clock. Taubenheim retreats to throw and launches a potential game winner but Warrior defender Seth Wetovick leaps high in the Fullerton night air to pick off the 5th Taubenheim pass of the night. With one play left, Fullerton QB Will Meyer kneels down and the game is over. A courageous comeback by a very well coached Amherst football team falls short and Fullerton....minus Garrett Sonderup until that critical punt snap.....lives to see the Quarterfinals.

Amherst finishes a great season at 8-2 and returns many of it's top players next season. Fullerton moves to a spotless 10-0 and will face Hemingford next Tuesday in Fullerton in a 2:00 afternoon match-up. Temps that day are forecast to be a high of 34 degrees.

In what amounted to 2 quarters of play, Garrett Sonderup rushed for 256 yards on only 15 carries and scored 4 Tds. That moves Sonderup's unofficial season rushing total to 2,271 yards and swells his career rushing yards to 5,630, which places him 10th on the all-time career rushing yardage list of 5,000 yard runners. There have only been 34 backs in history to reach that plateau.

Amherst quarterbacks completed 24 of 42 passes for 356 yards and 5 TDs but suffered 5 interceptions. Ty Hadwiger caught 7 aerials for 104 yards a 4 TDs, while Breyden Eckhout hauled in 10 Taubenheim passes for 192 yards and a score.