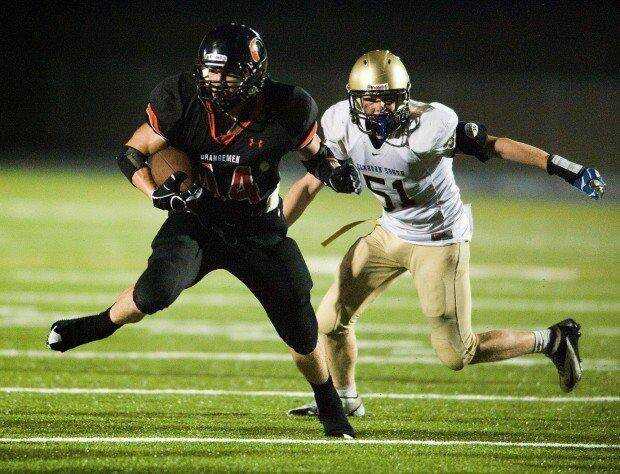 Jessup Workman of Beatrice (#44)is one of Class B's best.

One year ago in the Orangemen's 1st round playoff game against Elkhorn South, RB Jessup Workman carried the ball 43 times for 219 yards and 5 touchdowns. Beatrice lost that 2 overtime battle 38-37 and packed in the football gear for the season. But Friday night under the bright lights of Elkhorn Public Stadium, the 6-1, 200 senior had 5 less carries, scored 2 less touchdowns, but gained 21 more yards and led his team to a wild and woolly 42-35 win over that same Elkhorn South team. Workman was virtually unstoppable on offense and defense as well, as his Orange buddies answered each and every call when they had to. It was a game for the ages that featured some crushing hits, crunching blocks and two of the finest running backs in the entire state.

It was the type of game that just ripped the heart out of your body knowing that someone's season had to come to an end. Despite the final count on the scoreboard, there were numerous defensive plays that could have made any high school football highlight reel. Not even the slightest whisper of a wind was in the air above that Elkhorn artificial turf despite it being the crispest, coldest night of the 2014 high school football season. In all seriousness, I doubt if anyone of us down on the field even noticed the cold. It was that good. Now stick with me and let me tell you about this classic.

It was the battle between Class B's number 2 Elkhorn South and unranked Beatrice. Not many folks that follow high school football, especially Class B, had the feeling the Orangemen were going to play like a team on the outside of the ratings looking in.......and they didn't.

This clash not only featured the amazing and fresher Jessup Workman from Beatrice, but showcased Elkhorn South's 15 year old Moses Bryant. The freshman sensation, who was born in the west African country of Sierra Leone, has been a terror on offense since taking over at running back since an injury to Chad Carlos at the end of September.

The game actually began with both teams having to punt on their first possessions of the game. But on the Orangemen's 2nd time with the ball, junior quarterback Alec Cromer hit Heath Hovendick with a pass completion. As Hovendick was squirming for extra yards, Storm defender Zach Kenyon ripped the ball loose and raced the other way 44 yards for an Elkhorn South touchdown. That was with 5:15 left in the first quarter. The scoring really never let up after that.

On the very next possession, Beatrice wasted little time marching 56 yards for a score after an excellent kick return by senior Riley Krause. The 175 senior was a thorn in the Storm's side all evening with his kick returns......124 yards worth. The Orangemen took only 6 plays with RB Chase Nelson carrying the final 17 yards for the score. The 1st quarter ended with things square at 7 apiece.

Beatrice would score the next time they touched the ball and it was a dandy. Jessup Workman, who is known for his powerful running into the heart of the defense for short bursts, broke off tackle this time and out sprinted the entire Elkhorn South defense 45 yards to the end zone. That stretched the Beatrice lead to 21-7 after Hovendick booted the point after through.

Elkhorn South came right back with a 9 play drive that finally turned freshman Moses Bryant loose. The fabulous freshman began to show why he is more than worthy of all-state consideration. Moses did some serious dancing with gains of 13 and 15 yards that reminded me of Omaha North's Calvin Strong, maybe even shiftier. The Storm concluded the drive with a 6 yard TD pass from QB Collin Point to junior Tanner Meyo. That made it 21-14 Beatrice.

The Orange took it the length of the field in 1 minute 24 seconds but were stuffed on a 4th and one at the goal line by the Storm defense. Elkhorn South averted disaster and remained a TD behind at the half.

It was freshman Bryant's time to shine to begin the second half and most of this carries were right in front of me on my side of the field. Moses carried all but one time in the Storm's 70 yard scoring drive including the final 10 yard dance to the end zone. Jeremy Baker's point after boot tied things at 21.

Beatrice would then score again on Chase Nelson's 2nd TD of the game, a 12 yard run. Elkhorn South answered right back with an 11 yard TD sprint by QB Collin Point and the 3rd quarter ended with things all knotted at 28 each.

Beatrice had a pretty looking, efficient drive to start the 4th and money quarter. Mixing the run and pass perfectly, the Orangemen rode the very accurate arm of QB Alec Comer and the tireless, powerful, pile driving legs of Jessup Workman on an 11 play scoring drive. Workman did the honors with a parting-of-the Red Seas 4 yard blast up the gut. Beatrice led 35-28.

Elkhorn South took advantage of a short 50 yard field on the following possession. Moses Bryant broke loose on a spectacular 19 yard dash that showcased some stop and go moves that took my breath away. Point then found 6-3' senior Chase Denton for a 23 yard completion, then it was Point running for 11, then taking it in for the final 3 yards for the score that again tied things, this time at 35-35. The clock read 8:54 in the 4th.

Elkhorn South had plenty of time to score, 4 minutes 55 seconds, but on a 2nd and 9 from the Storm 32, the Orangemen defense did what they did all night.....keep Collin Point on the run when he attempted to throw. This time Point sailed a pass out of bounds and was called for intentional grounding. On a 4th and 20, Point again dropped back, fired a pass over the middle and had it knocked away by.........Jessup Workman. Wouldn't you know it.

Beatrice still had 3:57 to drain off the clock to preserve the win and Jessup Workman and Alec Comer took care of that with runs that carried all the way to the Storm 18 before time ran out. Unranked, but surging Beatrice had pulled the "upset" and completed payback from a year ago.

For Beatrice, it was Jessup Workman who led the way. The hard working senior back rushed 37 times for 241 yards and 3 Tds. Orangemen coach Bob Sexton apparently lightened the load this fall for Workman, who had been ridden hard a year ago, carrying the ball 28 times an outing for 1,693 yards. In 10 games this season, Workman has only 188 carries, good for 1,343 yards, but seems to have fresher legs. Chase Nelson added 118 yards on 18 carries and 3 scores for Beatrice. QB Alec Comer completed 9 of 11 passes for 140 yards. The junior basketball standout is completing an amazing 70% of his passes this year and has 12 TDs with only 1 interception.

On defense, 6-3, 235 pound senior linebacker Tanner Lusk was a monster, making 10 tackles. 7 were solos. Workman wasn't far behind with 6 solos and 8 total stops.

For Elkhorn South, who finishes the season at 7-3, it was the freshman Moses Bryant who led the ground attack. Bryant danced his way to 164 yards on 19 carries, 148 coming in the 2nd half. QB Collin Point added 83 yards on 13 carries and 2 scores. On defense for the Storm it was an outstanding evening for junior Tanner Meyo (#44) who had 16 total tackles, of which TEN were solos. LB Cole Butler (#6) added 10 stops.

Beatrice will advance to the Class B quarterfinals and meet Scottsbluff in a 4:00 game in Beatrice. The Bearcats defeated Aurora 41-33 and feature outstanding 2 year 1000 yard back Ty Benson.

Moses Bryant ended his initial high school football season with 1,186 yards and 17 touchdowns. He is the only the SECOND freshman in 11-Man football to rush for 1000 yards in a season. Mike Brower of C-1 Fillmore Central was the other. This young man will cause this guy some sleepless nights thinking about his runs Friday night. What a talent.