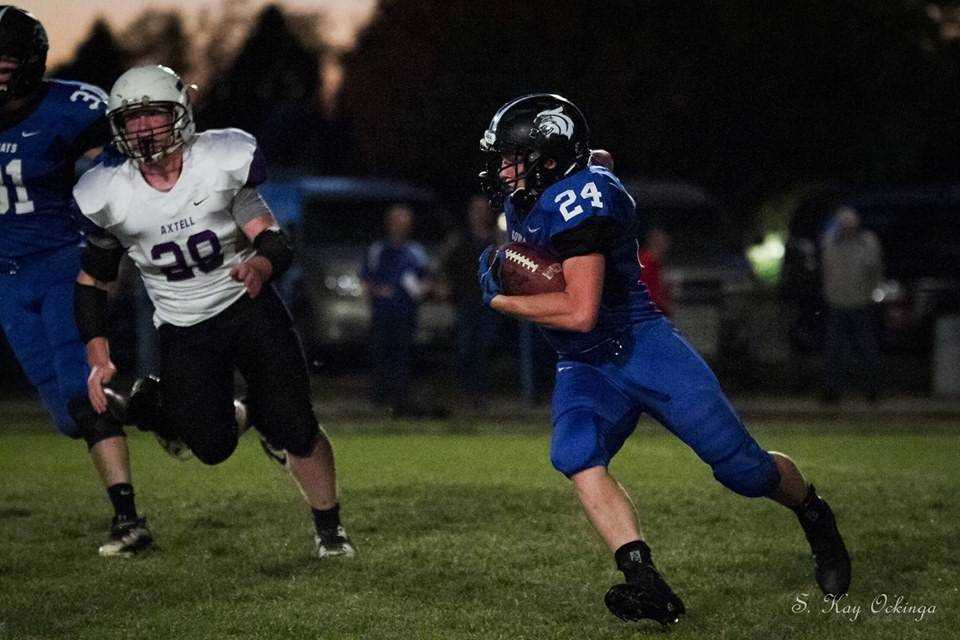 It was a windy double dip trip for this guy today, a warm breezy afternoon, but darn right cold blustery night. Let's check out the game summaries.

No doubt about it, tjis was the Keithen Drury show. The 2 time 1000 yard rusher put on the show of his career by running for 385 yards on 28 carries and scored 7 touchdowns in the Bobcat's 28 point win over the invaders from Bassett. Before the 1st quarter had come to a close, the 5-10, 185 pound star had already bolted for 172 yards on 10 touches and scored on TD jaunts of 4, 49, and 64 yards, all three coming on dashes around the left side. Blue Hill raced to a 26-6 halftime lead but North Central closed to within 26-13 on a 2nd half opening drive 29 yard TD pass from Tyler Knox to speedy Fb Andrew Hollenbeck. The 180 pound Hollenbeck had already scored in the first quarter on a nice 66 yard kick return.

That would be the closest the Knights would get as Blue Hill once again sprung the shifty, elusive Drury for 3 third quarter touchdown runs of 65, 17, and 68 yards against the tightly stacked North Central defense.

North Central just couldn't get their offense untracked as the Bobcats were tough as nails no matter what the Knights cooked up. QB/LB Tyler Knox was a standout on defense for the visitors but Blue Hill was just a cut above in all phases of the game.

Bobcat quarterback Jason Poe, a 6-1, 180 senior, added 91 yards on 13 carries and rarely had to take to the air in the afternoon contest.

Blue Hill will travel to Hemingford to meet the 2013 Class D-1 state runner-ups in a Wednesday 2nd round contest that very well may be another afternoon game. Hemingford bolted to a 64-0 halftime lead enroute to a 71-14 win over Shelton Thursday afternoon.

The Blue Devils had to do some reshuffling with ace running Austin Schnitzler on the shelf with concussion like symptoms, and little brother Preston stepped up and turned in an outstanding performance on both sides of the ball as Kenesaw pulled away from Meridian to post the 55-26 win on a very raw night. Preston Schnitzler took over the quarterback controls and promptly rushed 30 times for 250 yards and 6 touchdowns. The speedy, fearless junior scored on runs of 52, 1, 4, 1, 37, 43 yards and turned in 15 tackles from his linebacker position to spark the Devils.

The real turning point of the game came at the beginning of the 2nd quarter when 220 pound junior Carson Woodman broke through and blocked a Meridian punt at the Mustang 11 yard line. Junior Jake Brunk recovered the block in the end zone for a score, which pulled the Blue Devils into a 14-14 tie when Schnitzler ran in the double point conversion. Kenesaw scored the next 42 points starting with that blocked punt score and that was the story of the ball game. For Woodman, it was his 3rd blocked punt of the year to go along with his 6 sacks, 4 recovered fumbles and 46 tackles for the year.

Keaton Harpham, who normally plays quarterback, did a marvelous job filling in for the injured Austin Schnitzler, ran for 148 yards on 21 carries. Harpham just simply got stronger as the game went along and made 1st down yardage when the Devils needed it most on 3rd down conversions. Harpham did score on a 27 yard run in the 3rd quarter.

Most impressive was Meridian running back Brandon Jackson. Jackson, who has run for over a 1000 yards two consecutive seasons, is one of the best 8-Man backs I have seen this year and is certainly a small college prospect. On this night, the 180 pound senior rushed for 27 times for 221 yards and scored on runs of 54 and 64 yards and added a sparkling 71 yard highlight reel TD reception that covered 71 yards. Meridian ended their season 4-5 and really have a nice, hard hitting football team that played a brutal schedule.

Kenesaw will stay at home next Wednesday to face a powerful Randolph team who beat Bancroft-Rosalie 54-14. Randolph has a Division 1 running back in Dylan Loberg who has rushed for 1,511 yards this season, including 202 yards on 22 carries and 3 Tds Thursday against Bancroft-Rosalie. Kenesaw is expected to have Austin Schnitzler back for the Randolph game.