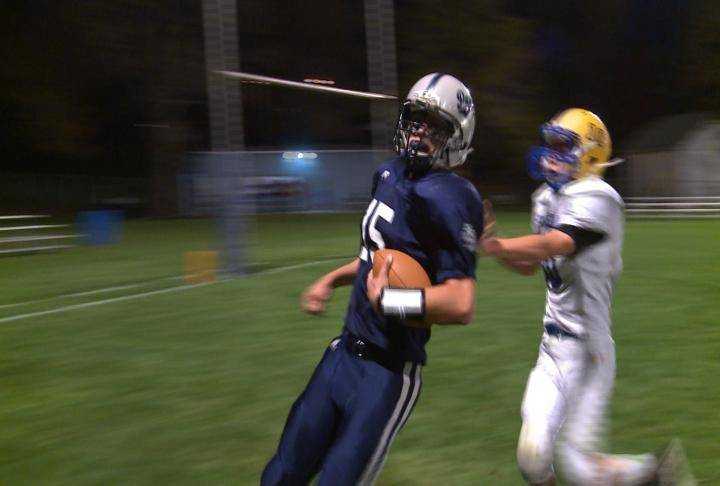 Bancroft-Rosalie quarterback, Carsten Tietz (#15) runs for one of his 8 Tds in the Panther's 106-70 win over Allen.

Last week of the regular season and we will have a bit of a shorter salute to our heroes. We'll concentrate on giving you some 1st round playoff capsules in the coming days instead. And.....awaaaaaay we go with our heroes list.................

*Garrett Sonderup-Fullerton - Saying the senior RB came up huge Thursday against High Plains is a gross understatement. In the Warrior's 60-46 regular season finale victory, Sonderup literally short-circuited the scoreboard by rushing 40 times for an eye-popping 484 yards and 7 touchdowns. The 187 pound Darren Sproles-type runner scored on runs of 65, 59, 62, 16, 65, 11, and 3 yards. Fullerton needed all of Sonderup's heroics to overcome High Plains explosive offense last Thursday night. The rushing explosion elevated Garrett Sonderup into the 5,000 Yard Career Rushing Club. The 484 yards also increased his season rushing total to 1,919 yards. By the way, Sonderup's 5,278 career rushing yards is the 17th most in the history of Nebraska high school football. Fullerton will host Sutherland this Thursday, October 30th in the 1st round of the Class D-1 playoffs.

*Jessup "Horse" Workman-Beatrice - Workman was a "work horse" in the Orangeman's 49-17 pounding of Lincoln Pius X. Workman rambled for 209 yards on 15 tries and scored running touchdowns of 53, 80, and 3 yards in the win. Jessup increased his season rushing total to 1,102 yards and now has run for 3,645 yards in his sparkling career at Beatrice. The Orange will travel to Elkhorn Friday to face Elkhorn South in the 1st round of the Class B playoffs. The game will be part of a double-header in Elkhorn. Game time is 7:30 and will follow Elkhorn and York, who will kick it off at 4:00.

*Ian Mertik-Blair - Carried only 10 times but rushed for 146 yards and scored on TD dashes of 61, 9, and 44 yards in the Bears 62-21 blasting of Elkhorn Mt. Michael. Mertik increased his season total to 827 yards rushing and 16 touchdowns. The rugged 180 senior also has 93 tackles on defense along with 9 tackles for loss, 3 recovered fumbles, and an interception. Mertik's backfield buddy Lucas Vopnford ran for 108 yards and 3 Tds in that EMM game and has run for 588 for the season. After dropping their first 3 games this fall, the Blair raced through the next 6 contests undefeated, earning a playoff berth with a Friday match-up at Crete.

*Moses Bryant-Elkhorn South - Became only the second Freshman in Nebraska 11-Man football history to reach the 1000 yard rushing plateau. Bryant rallied his Elkhorn South team to 21 straight points to upset then number one Gretna 42-35. The fabulous freshman rushed for 178 yards on 17 carries and 2 touchdowns, the last one coming on a spectacular 76 yard TD reception with 2 minutes remaining in the game. Bryant caught a 10 yard crossing pass pattern and highlight reeled the final 66 yards to break the Dragons back in the game. Bryant now has 1,022 yards and 16 touchdowns as the Storm charges into the playoffs with a home game against Beatrice Friday.

*Jordan Redler and Austin Bridges-Malcolm - The dynamic duo once again led Malcolm as the Clippers nailed down a C-2 playoff spot with a 32-0 win over Thayer Central. Redler blasted his way to 217 yards on 29 carries and 2 Tds, while QB Bridges scored 2 first half scores on runs of 53 and 23 yards on his way to 126 yards only 9 carries. Bridges finishes the regular season with 958 yards and 9 rushing scores, plus another 589 yards and 9 Tds passing. Jordan is not far back in the rushing department with 928 yards and 8 Tds. Malcolm (8-1) will travel to Fremont Friday to face Archbishop Bergan in a C-2 playoffs 1st round game. This is a dangerous, determined football team.

*Jacob Matthew-Millard North - 230 pound junior fullback with speed and power to spare, bolted for 307 yards on 31 carries and 2 touchdowns as the Mustangs rallied to beat stubborn Papillion La Vista 49-29. Matthew scored on runs of 15 and 73 yards and probably stamped himself as the least favorite back to tackle in Class A in the process. Teammate Adrell Taylor added 193 yards on only 9 carries. Check this out, Taylor only had carries in 6 games, but has rushed for 607 yards and averaged 18.3 yards a pop. That's not a misprint. So, Matthew increased his season rushing total to 1,156 yards but has only 6 Tds. Figure that one out. Fred Petito's undefeated Millard North team will be the #2 seed in the Class A playoffs and will face Bellevue East (4-5) Friday in an afternoon match-up at Buell. The 2 teams have not met this season.

*John Pfeifer-Grand Island Central Catholic - Tough running senior ran for a season high 221 yards on 27 carries and scored on a 7 yard run in the Crusaders crazy 45-34 win over rival St. Paul. Teammate Nate Boon added 144 yards on 21 carries in the win as GICC nailed down a #9 seed and road match-up with undefeated Wilber-Clatonia in the C-1 playoffs 1st round. Pfeifer has 747 this fall and will try to help the surging Crusaders to some playoff success.

*Alex Kowalski-York - (5-10, 158, RB/MLB/Kicker, Sophomore) #44 - Fumbled and lost the ball late in the game against Aurora in the District title game but made amends two plays later by intercepting a Jake Kittle pass and returning it 78 yards for a Duke score. That gave York a 21-6 lead at the time and the Dukes went on to win 21-12. York will enter this week's Class B playoffs as the number 10 seed and will travel to play Elkhorn High Friday in a 4:00 kick-off.

*Carson Huenefeld-Nebraska Christian - 185 senior rushed for 176 yards on 18 touches and scored Tds on runs of 30, 61, and 17 yards. Carson also added 2 more scores on pass receptions of 17 and 60 yards in the Eagles wild 67-42 win over playoff bound Clarkson-Leigh. Huenefeld, who runs very hard, swelled his final 2014 rushing total to 1,264 yards (16Tds). Christian is not eligible for the D-1 playoffs due to being over the number of allowed students to play 8-Man football. The Eagles finish the season with a 5-3 record.

In that 67-42 loss to NC, Clarkson-Leigh QB Kobe Paprocki threw for 397 yards and 4 Tds. Senior Chris Konicek caught 11 passes for 231 yards and 3 scores for Clarkson-Leigh, who will play at Hartington-Newcastle Thursday in the 1st round of the D-1 playoffs.

*Lincoln East defensive secondary - Did it again by intercepting 4 passes in a 49-7 pounding of Omaha Bryan. Nathan Netz picked off 2 of those passes and returned one for a 36 yard touchdown. Lincoln East will host Omaha Central Friday in Round 1 of the Class A playoffs at Seacrest Field. Dangerous ball club who has picked off 19 passes in 9 games.

*Jon Murray-Waverly - Ran for 209 yards on 27 carries and scored on runs of 19, 66, and 61 yards to lead the Vikings in their 27-24 win over Plattsmouth. Murray's explosion increased his season running total to 956 yards and 9 Tds. With the Plattsmouth victory, Waverly sneaks it's way into the Class B playoffs after losing their first FIVE games. The 4-5 Vikings will face Omaha Skutt on the road in the Class B 1st round contest.

*Mitch Schenkelberg-Omaha Westside - Was a shining star in the Warriors 60-27 win over Fremont. Schenkelberg scored 5 touchdowns on runs of 7, 14, 12, 10, and 13 yards as Westside earned a 12 seed and the right to face Millard West Friday in the 2nd game of a DH at Buell Field. Mitch Schenkelberg is a great success story this fall. After rushing for ZERO yards in game one, 14 and 85 in games 2 and 3 respectively, the rugged senior has reached the 916 mark filling in for injured junior starter Logan Duyree. Nearly every carry for this guy is into the heart of the defensive line. Very nice player indeed.

*Wyatt Mazour and Joseph Brugger-Boone Central/Newman Grove - In the Battle Royale between the Cardinals and Norfolk Catholic, the all-state Mazour ran for 100 yards on 22 carries and was 12 of 21 passing for 221 yards. Brugger carried the pig for a season high 29 times and responded with a well earned 109 yards and TD runs of 1 and 10 yards. Entering the playoffs, the incomparable Wyatt Mazour has rushed for 1,107 yards (9.8/carry) and 17 touchdowns, passed for another 1,481 yards (58% completion rate) and 19 Tds and is also one of the most feared kick and punt returners in C-1. Boone Central/NG earns the Number 1 seed in the Class C-1 playoffs and will have a Friday home game vs. Milford-Dorchester (6-3). Will anyone be able to derail the Arnie Johnson Farewell Train in C-1? Makes you wonder after watching the Cardinals play Norfolk Catholic.

*Tony Meusch-David City - The tough running senior ended his high school football career by rushing 182 yards on 37 carries and 2 Tds in the Scouts 22-14 loss to Wahoo Neumann. Meusch scored on 1 and 2 yard runs and ended the season with an unofficial 871 yards in only 6 games.

*Gabe Haney-Hyannis - In a gut wrenching loss to Minatare, Haney bolted for 275 yards on 23 carries and scored 5 touchdowns. Haney, an amazing 165 junior, logged his 5th straight 200+ rushing game for coach Lance Braun's Longhorns. For the 8 game season, Gabe Haney has rushed for 1,583 yards (11.8/carry) and 29 Tds. He also has 96 tackles, 2 interceptions and 2 recovered fumbles for the 2014 season. The 4-4 'Horns will only have to wait a week to get even with Minatare as they host a 1st round playoff game and a repeat meeting with the 5-3 Indians. Quite an accomplishment for young head coach Lance Braun.....nice job, my friend!

First of all, let's make one thing clear here. The two coaches involved in this baby are top notch high school 8-Man football head coaches. Bancroft-Rosalie Dr. Jon Cerny has won 2 state championships with his team and has led the Panthers to 11 straight playoff appearances. Allen coach Dave Ulrich has guided his team to 5 playoff appearances in the past 12 seasons, often fighting for those spots against brutal competition. These aren't beginners and these teams are sad sacks ending the season with nothing to lose. Well respected programs with respected coaches here. With that in mind, here are some details.

Amazingly enough, there was only one non-rushing or passing touchdown in the game. That one was listed under "misc. Tds" by Allen 1000 yard rusher Brian Boese. So, for Bancroft-Rosalie, QB Carsten Tietz rushed 22 times for 313 yards and 8 Tds. He also completed 3 of 5 passes and a score. B/R running back Zeb Greve ran for 330 yards on 22 carries and 4 Tds. For Allen, Boese rushed 33 times for 222 yards a 4 Tds. Five Bancroft-Rosalie defenders had double digit tackles along with 4 from Allen.

My question is this.....how would you feel as an Allen player that you scored 70 points and still had a running clock slapped on you late in the 4th quarter because you trailed by 35 points? The Eagles probably wonder what you have to do to win. Yeah I know, play some defense but let's be nice. Allen misses out on the playoffs with a decent 4-4 record. Bancroft-Rosalie's 5-3 forces nail an 11th seed in the East bracket of Class D-2 and will travel to tough Randolph for a Thursday meeting.