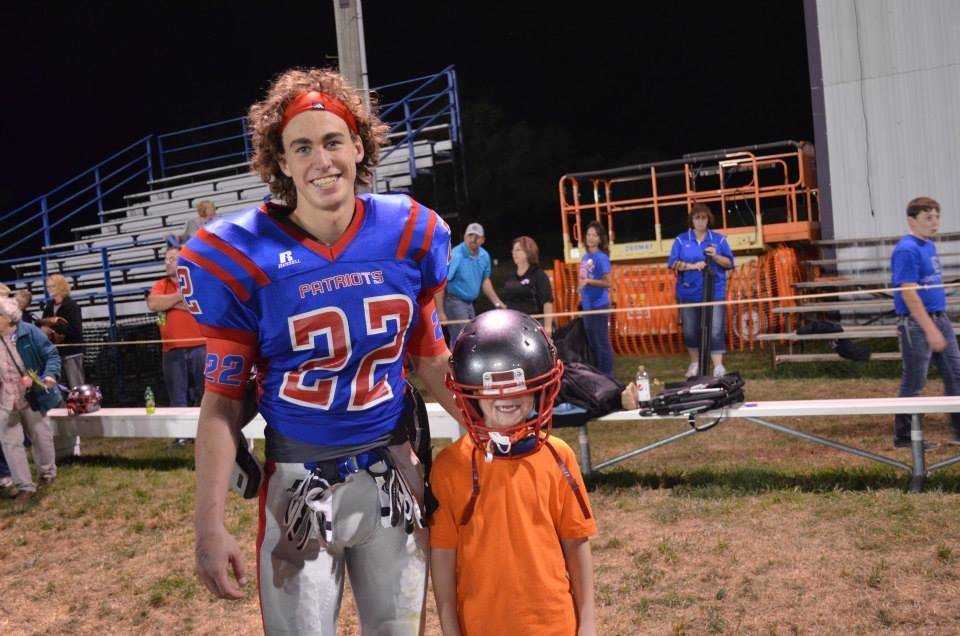 Clarkson-Leigh's Christopher Konicek and unidentified fan hiding under a much too large helmet.

These sparkling performances seem to rise in number each week as the season rolls along. Week 8 was a killer for these Friday (and Thursday) night high school heroes. Let's face it, when it takes three installments to spotlight them all, these football stars are headed toward a Class of 2014 that sets all kinds of records.

As Jackie Gleason used to say back in the day......Awaaaaaaay we go!

*Noah Johnson-Sutton - Did what I said he couldn't do.....rush for over 300 yards against unbeaten Hastings St. Cecilia. I never felt so good about being wrong about something in all my entire life. Johnson carried the ball a State 11-Man record 57 times in the Mustang's 30-24 victory over the Bluehawks. The amazing senior rushed for 350 yards, including a mind boggling 79 yards on 14 totes in the winning drive that consumed 6 minutes and left St. Cecilia only 38 ticks to answer. And of course they couldn't and didn't as the final count would indicate. It was also Noah Johnson's punting that pinned St. C's deep in their own territory in the 2nd half that aided Sutton's triumph. For the season, Johnson has rushed for 2,385 yards in only 7 games. The 6-0, 195 pound senior has carried the ball an average of 34 times a game and has scored 34 rushing touchdowns. Johnson is averaging 298 per game in 2014 and just might break the single season rushing record before it's all over. I have my fingers crossed so that this amazing young man may stay healthy for the remainder of the season and not suffer the fate Columbus RB Dillon Loschen did back in 2010. Most all of Noah's carries are right into the heart of the defense and makes my heart stop sometimes. I've watched football for over 50 years and still cannot fathom how he made it through that St. Cecilia game while still looking fresh. You are amazing, son.

*Garrett Sonderup-Fullerton - Put on a performance for the ages Thursday night as the Warriors battled to a 52-46 overtime win over the mighty Howells-Dodge Jaguars. Sonderup ran for 325 yards 34 carries and scored 8 Touchdowns on runs of 7, 3, 5, 53, 36, 75, and 10 yards plus a 33 yard reception for another. The 180 pound senior whiz increased his season rushing total to 1,441 yards and his outstanding career rushing total to 4,750 yards. Garrett Sonderup is something else with his low pad level, elusiveness, power, vision and speed. 'Bout has it covered, doesn't he?

*Jaydn Kowalski-Bellevue West - (6-4, 195, QB/P, Junior) - Kowalski is probably wondering what he has to do to get a win. Kowalski set the Class A State Single Game Passing record Friday night by completing 30 of 54 passes for 599 yards. He had already broken Millard North's Alex Ditoro's 2012 record of 484 before the 3rd quarter had ended in the Thunderbird's game vs. Creighton Prep. His 5 Td tosses and 599 yards weren't enough as Bell West went down to the Junior Jays 47-43. Just a week ago, the T-Bird sharpshooter threw for 445 yards in a 47-42 loss to Millard North. So, the past 2 weeks Jaydn Kowalski has passed for 1,044 yards and 10 Tds. That's a full season for many quarterbacks. For 2014, Kowalski has passed for 2,484 yards and 32 touchdowns with 7 interceptions. He is connecting on 60% of his tosses, so the kid is pretty accurate.

*Baeley Pelster-Columbus Scotus - Slippery junior gets better with each game. In the Shamrock's 56-6 shelling of North Bend, Pelster carried the ball only 7 times but scored on 5 of those touches. Pelster rushed for 136 yards and scored on runs of 7, 11, 86, and 2 yards and also caught a 26 yard scoring pass. The 'Rocks are unbeaten and are apparently headed for a 1st round playoff game at home.

*Christopher Konicek-Clarkson/Leigh - In a wild 86-46 windswept victory over Cross County Friday afternoon, the 6-2, 185 pound senior rushed for 265 yards on only 13 carries and scored 8 touchdowns on runs of 56, 26, 7, 10, 31, 50 and 59 yards. Konicek also returned the opening kick-off 78 yards for a score. For the season, Chris has 845 yards rushing and 13 Tds., 23 receptions for 385 yards and 7 more scores. He has 365 yards in kick returns, 153 yards on punt returns and 1,768 yards of total offense in 2014. 3 of his kick returns have been returned to the house along with 1 punt return. You just have to be happy for this young man who has suffered a dislocated shoulder, open heart surgery, a broken hand and goodness knows how many other injuries that would make most players throw in the towel. What a competitor. I like this kid......and don't you dare cut that hair, man.

*Turner Bowman and Kelly Cliffords-Cross County - In that 86-46 loss to Clarkson-Leigh, QB Bowman completed 17 of 26 passes (including his first 9) for 250 yards and 5 Tds. Bowman also rushed 19 times for 114 yards and scored on a 43 yard run while taking a frightful beating but kept on ticking. Burly 210 pound TE Kelly Cliffords caught 11 passes for 187 yards and 4 touchdowns. His scoring receptions covered 11, 8, 3 and 7 yards. Cliffords was also a demon on defense all day

for Cross County. For the season, Cliffords has 77 total tackles and 10 tackles for losses. The Cougars only trailed 46-38 at halftime in this game but just couldn't keep up in the 2nd half. So neat to see Cross County compete so well in this football game. This hard luck team only scored 8 touchdowns all of last year while going 0-8. This season the Cougars are 2-5 and things are looking up. Not that long ago, Cross County was Class C-2. Sad sign of the times, plus you won't find a neater football/softball facility than this school has. Top notch. Where else do you go where, as you park your vehicle, a golf cart rolls up next to you and asks if you want a ride to the school for a bite to eat. Most Country Clubs don't even do that! 1st Class, baby.

*Taylor Murph-Ralston - Junior RB edged ever so close to that thousand yard mark by running for 133 yards on 23 totes and a touchdown in the Rams 24-19 loss to Omaha Gross. Murph needs only need 6 more yards to hit the 1000 yard plateau and has scored 11 TDs and picked off 3 passes on defense this year.

*Jeff Hall-Gibbon - Bolted for 168 yards on 25 tries in Gibbon's 41-28 win over pesky Ravenna. Hall has run for 1,105 yards and 10 Tds in 2014 for super coach Mark McLaughlin's Buffaloes. On defense, Hall has made 50 tackles and 30 of those stops were solos. Jeff has also recovered a fumble, pirated 3 passes and is one of the top kick return men in C-2. In just 24 returns, Hall has accumulated 1,125 yards. You do the math. You Do Not want to kick to #12. Duuhhh. It appears the Buffs are headed for a playoff spot, currently sitting 13th in Class C-2. Gibbon has lost only to Cambridge this season.

*Ty Johnson-Grand Island Northwest - 5-11, 185 pound senior rushed for 170 yards on 35 carries in yet another heartbreaking 36-34 loss, this time to bitter rival Aurora. The tough running Johnson hit pay dirt on runs of 4, 5 and 24 yards in the loss. Ty Johnson, son of top notch thoroughbred horse trainer Marvin Johnson, has rushed for 913 yards and has one game to go against tough Seward to get 87 yards to reach that magic 1000 yard mark.

*Nick Arlt-Oakland-Craig - In a 50-14 win over Homer, the 3 time 1000 yard rusher blasted his way to 362 yards on just 14 touches and scooted for 6 Tds. That's 22.6 yards a pop, folks. This year, Arlt has run for 1,477 yards and 23 touchdowns. This 362 yards against Homer raises his career rushing total to 4,905 yards. Remember, there have been only 28 backs in Nebraska high school football history that have hit that elusive 5000 yard career mark. We have FOUR on the verge this season.

Jonathan Withrow-Kimball and Gaige Marshall-Hershey - In a head-to-head battle between these two returning 1000 Yard rushing stars, Withrow took that rushing honor and his Longhorn team won the game 24-21. The Kimball junior ran for 193 yards on 30 carries and scored a TD. Withrow went over the 1000 yard mark in that Hershey game and raised his season total to 1,156 yards with 12 TDs to go along with it. The hard rushing Marshall wasn't far off Withrow's pace with 173 yards on 17 carries and a score. Gaige Marshall raised his season total to 1,133 yards and also eclipsed the 1000 yard mark in the game. Kimball kept their playoff hopes alive with the win but playoff chances look dim for the Panthers, which is a shame.

*Trevor Nickelson-Ashland-Greenwood - Sophomore sensation ran for 176 yards on 33 carries and scored twice in A/G's 35-14 win over a good Boys Town team. Nickleson raised his season running total to 990 yards with 14 TDs. On defense, Trevor has been in on 36 stops. This kid started on defense as a freshman and played a ton on offense. Another one of my favorite high school football players.

*Grand Island Central Catholic football team - Snared the District C-1, District 6 title with a dominating 42-7 trouncing of the Holdrege Dusters. One week after knocking 4th rated Kearney Catholic for the unbeaten ranks, the Crusaders continued their complete football game on both sides of the ball in the Holdrege win. GICC compiled 382 yards of total offense, while the suffocating defense, led by D-1 Wyomng recruit Youhanna Ghaifan, turned in yet another oustanding performance by holding the Dusters to a paltry 39 yards. This GICC bunch will be a unfortunate 1st round draw for somebody when the playoffs commence on Halloween night. There may not be a better defender below Class A than Ghaifan. Incredible strength and lightening fast footwork. You'd be a fool to run his way on offense.