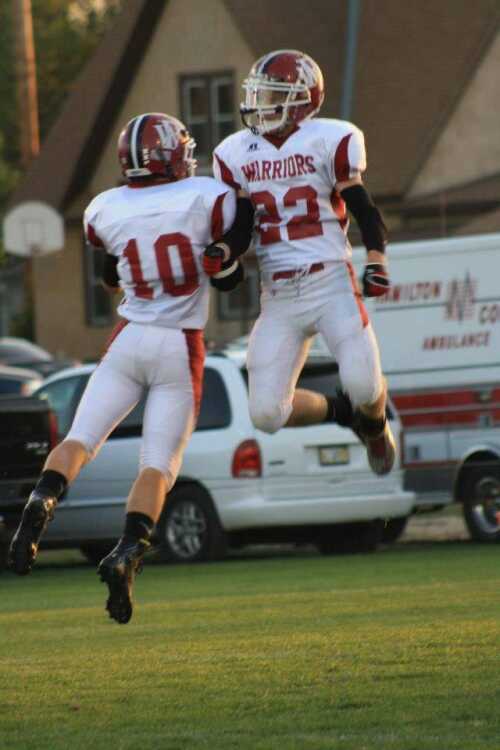 Senior All-State running back and 3 time 1000 yard rusher Garrett Sonderup exploded for 325 yards and 8 touchdowns to lead 6th rated (D-1) Fullerton to a high energy, nail biting 52-46 overtime win over the D-1, 9th rated Howells-Dodge Jaguars Thursday night in Fullerton. On a picture perfect evening for high school football, the 180 pound Sonderup picked the perfect night to showcase his immense talents against one of the toughest 8-Man football programs in Nebraska high school football history. It was a night when that saw the undefeated Warriors jump out to a 32-14 lead, then have to hang on for dear life when Coach Mike Speirs turned to the bread and butter play that defines Howells-Dodge football. Three unanswered touchdowns by the white and green clad Jags turned this Class D-1, District 6 Championship game into a game for the ages.

Sonderup, an all-state RB a year ago, was in high gear from the get-go. On Fullerton's 1st possession, junior QB Will Meyer sprinted 39 yards on a bootleg play to the Howells-Dodge 6 yard line. One the very next play, and Sonderup's 1st carry of the game, he bolted 6 yards for the score. The Jaguars answered quickly with a Tyler Polacek 1 yard run, but it was Sonderup that reeled off the next 3 touchdowns on runs of 4, 48 and a 33 yard TD reception, that set the Warriors up with a 26-14 halftime advantage.

On the opening possession of the 3rd quarter, Fullerton would start from their own 27 yard line. It was #22 (Sonderup) for 14 yards, then 2, then off to the house on a 36 yard TD beauty. Things looked pretty rosey for the Warriors with that 32-14 lead and 10:49 left in the 3rd, but Howells-Dodge caught fire and did what Howells-Dodge usually does, and has for years......run the toss sweep and just mow defenders down.

The Jag defense really caught fire after 205 pound Jesse Faltys scored on a 24 yard run to close to with 32-22. They stuffed Fullerton, then added another Faltys touchdown and 2 point conversion run to close the gap to 32-30.....2:57 left in the 3rd.

Three minutes into the 4th quarter, Howells-Dodge took their first lead of the game when nimble junior QB Tyler Polacek ran 6 yards for a score. Faltys blasted in for the double conversion and the visitors had a 38-32 lead.

On the very next possession, Fullerton QB Will Meyer went to the air and nailed FB Seth Wetovick for a 31 yard gain that carried to the Jaguar 20 yard line. 4 plays later Sonderup cruised in from 12 yards out for his 5th score of the Thursday night game to tie it at 38-38. Howells-Dodge came right back on the ensuing possesion, aided by a late hit call on the kick-off that put the Jags in great shaped at the Fullerton 33. But on the 5th play of the drive, the Warriors created the only turnover of the evening. As Jesse Faltys appeared to be on his way to a twisting, turning, tackle busting touchdown, a couple of Warrior defenders jarred the ball loose and recovered it at the Fullerton 3 yard line. What transpired next was an sparkling display of the greatness that defines Garrett Sonderup and that Warrior offensive line.

Sonderup carried Every Single play of a 7 play drive that stretched 77 yards, culminating with his 5 yard TD run. It was as though #22 had been transformed into Darren Sproles with his low pad level, twisting, powerful running that had perfect blocking lanes set up. Bouncing off defenders like a high powered shining sliver pin ball, Sonderup refused to go down many times on the sparkling 77 yard drive. Fullerton had regained the lead 46-38 after Sonderup went in from the 5 yard line. The all important 2 point conversion was executed by........you guessed it....Garrett Sonderup.

Howells-Dodge had 2 minutes, 10 seconds to answer.

The Jags did just that by once again riding Faltys. After runs of 14, 13 and 4 yards by Faltys, Tyler Polacek did the scoring honors with a 3 yard run and a 2 yard TD run. Faltys added the critical 2 point conversion and things were all square at 46 with only :21.8 ticks left in regulation.

The Warriors couldn't convert, even with an untimed down after a Jaguar pass interference call and the two rated teams went to OT.

Howells-Dodge had the ball first at the Fullerton 10 and Faltys gained 4, then 2. On the 3rd and 4 play, the Warrior "D" had great pursuit and forced Faltys to stop in the backfield which enabled the aggressive Fullerton onslaught, led by Sonderup, to spill the Jag back for a 3 yard loss. On 4th down from the 7, the Warriors sacked QB Polacek for another loss and that was that.

It took only one play for the left side of that Fullerton to bulldoze a 10 yard path for Sonderup to the promised land. The Warriors had withstood the furious Howells-Dodge comeback to take the 52-46 win. What a gem.

It was an evening to remember for Garrett Sonderup, as he rushed 34 times for a game high 325 yards and 8 touchdowns. QB Will Meyer added 63 yards on 12 carries. For Howells-Dodge, the powerhouse, steamrolling Jesse Faltys led the way with 205 yards on 30 touches. Hard running quarterback Tyler Polacek chipped in with 119 yards on 20 carries. Freshman RB Jordan Brichacek looked good with his 31 yards on 9 tries.

Fullerton wins their 1st district championship in a decade and moves to 8-0. The Warriors will face High Plains next Thursday to close the regular season and must prepare for a night of football filling the airways.

Howells-Dodge falls to 4-3 and will finish at home next Friday with Humphrey/Lindsay Holy Family.*