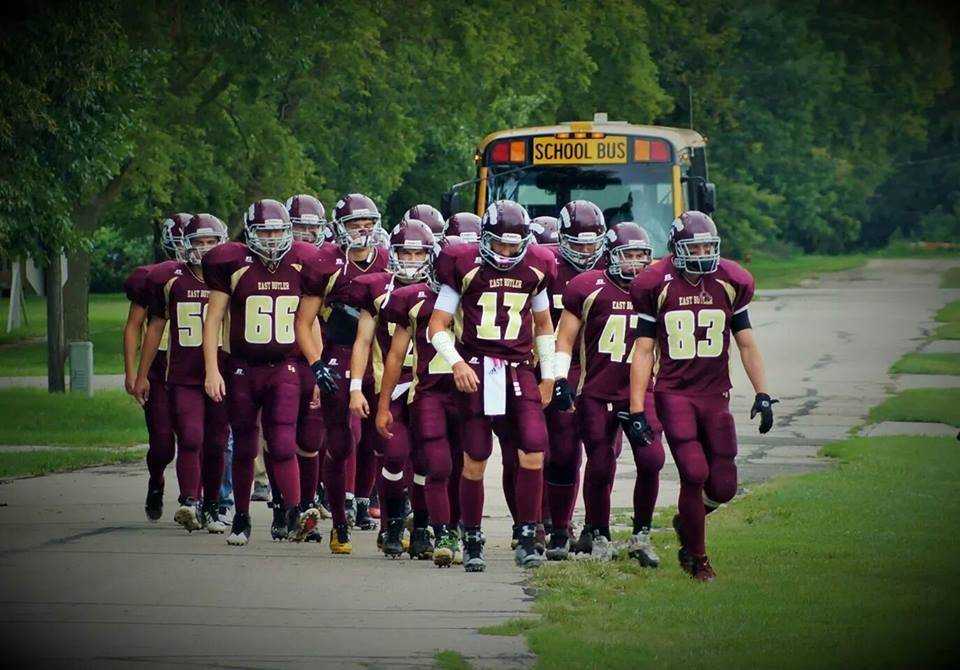 *Blake Chramosta-Ravenna - Slick quarterback ran for 137 yards on 14 carries and scored on runs of 70 and 9 yards as the Bluejays held off Twin River 28-24. Hasn't Ravenna had some terrific quarterbacks over the years to go along with their terrific coach, Mark Hudson.

*Ethan Skinner-Hemingford - Tough running Skinner bolted for 274 yards on only 14 touches and scored 6 Tds in the Bobcat's 79-20 win over Dundy County/Stratton. The outburst increased Skinner's season total to 1,262 yards and raised his career rushing yards to 4,716 along with 77 career touchdowns. Barring injury, the splendid Hemingford star should reached the coveted 5,000 Yard Career Rushing Club before the 2014 season comes to a close. What a player.

*Cody Robinson-Alliance - Senior RB rushed for 151 yards and scored on a 49 yard run late in the 1st quarter to lead Alliance to a 39-21 win over Gering.

*Lincoln East "D" - Pirated 4 second half Lincoln Southeast passes which led to a 21-10 victory over the Knights. Ric Dawson rushed for 100 yards, while Branden Carpenter added 96 in the big win. Nearly 3,900 fans witnessed the Spartan win at Seacrest Field. Lincoln East is sitting a pretty 6th in the Class A wild card standings this week and are a very good football team right now.

*Jeremiah Stovall-Creighton Prep - (6-0, 180, FS) #20 - Once in a while Stovall, who normally plays free safety on defense, gets to carry the pig when the Junior Jays have the ball. In Prep's 58-0 romp against South Sioux City, Stovall carried a season high 10 times and ran for 112 yards and scored on runs of 7, 16 and 43 yards. Stovall has now gained 446 yards rushing this season on only 36 touches and has scored 7 times on the ground. That's a slouchy 12.39 yards per folks. Jeremiah has also pirated 3 passes from his safety spot.

*Tony Muesch-David City - Piled up 248 yards on 27 carries in the Scouts 35-6 over winless North Bend. Meusch scored on runs of 4 and 8 yards in the win and increased his season rushing total to 754 yards against a tough 8 game schedule. Mr. Meusch runs awful tough for a 160 pounder and has taken a beating this season but kept on truckin'.

*Skyler Ratovek-East Butler - In an exciting 46-42 shootout win over Scribner-Snyder, Ratovek threw for 260 yards and ran for another 133. Tell you something, this Tiger football team is pretty salty and have played well against a tough schedule. Only losses are to Nebraska Christian and Friend. If you will recall, Friend just beat BDS, and East Butler only lost to BDS by a 42-30 count. This is a team you don't want to draw in the 1st round of the playoffs.

*Kyle Jensen-Exeter-Milligan - Mr. Everything ran for 225 yards on 23 carries in a shocking (or was it?) 46-20 win over Falls City Sacred Heart in a battle of last year's defending 8-Man state champions. Sacred Heart has moved down to D-2 this season and led at the half but couldn't keep up with the Timberwolves after that. Jensen scored on a 71 yard kick return and 11 yard run in the first half, then added runs of 1 and 64 yards in the 2nd half to seal the win. Jensen has now gained 1,247 yards this season and scored 26 touchdowns. Add on the gazillion tackles he's had on defense and you pretty much have the complete football player.

*Austin Malone-Falls City Sacred Heart - Ran for 131 yards on 19 carries in the loss to Exeter-Milligan. The Irish QB also ran 9 yards for a score and had a 44 yard Pic-6 in the first half as Sacred Heart sprinted to a 20-16 halftime lead. Goltz's boys ran out of gas a little in that 2nd half which you probably will not see again, since his lifetime coaching record is 262-45. Seems like that lifetime coaching record at FCSH is 18 million and 12.

*Trevor Polivka-Lincoln Parkview Christian - (5-11, 170, QB/LB/ATH) #20 - Ok, here's the deal with Polivka. He was absolutely the only thing coming back for Parkview this fall. Terrific, terrific quarterback and ball carrier that he is, you still need blocking. I feel sorry for this kid because of the roller coaster ride he and his teammates have experienced this season. One week they get clocked by 62-30 by Osceola, then the next 2 weeks Parkview buries Hampton and Sterling and scores 68 and 62 points respectively. Then Kenesaw comes in and bolts to an 80-8 HALFTIME lead before keeping things vanilla for most plays on offense in the 2nd half. And just a week later, last Friday, Trevor Polivka straps on the pads and runs for 185 yards on 15 carries and scores 4 times in a 66-64 basketball score-type win over Johnson-Brock. For the season Polivka has rushed for 1,011 yards on only 98 carries and gets the Bravado Award for just suiting up and taking the good with the bad. Put this kid on a good team and he is a shining star, as if he isn't already. I saw Trevor play a year ago in Osceola and he could play on my team any day of the week.........if I coached one.

*Carson Tietz-Bancroft-Roslaie - Fired up the wheels for 186 yards on 23 totes in a 50-6 win against a good Emerson-Hubbard squad. Tietz scored 4 times in the game and increased his season ground game total to 1,126 yards.

*Christian Best-Elm Creek - In a face-off with Blue Hill, Best rushed for 139 yards on 25 carries and scored both TDs for Elm Creek in the 20-13 loss. Best now has 1,269 yards for the season and still leads D-1 in rushing despite the closing Ethan Skinner of Hemingford.

*Wes LaBelle-Fremont Bergan - (6-2, 170 WR/DB) #22 - Holy smokes, LaBelle returned 2 punts for touchdowns (78, 54 yards) and ran for 2 more (5, 59 yards) in the Knights 58-2 win against Omaha Brownell-Talbot. Thus far this season, LaBelle has returned 3 punts for touchdowns, 2 kick-offs for scores, caught 26 passes for 439 yards and 6 more Tds, made 11 tackles on defense and intercepted a pass and recovered a fumble. Other than that it's been a so-so year for Wes LaBelle. How dare we forget Bergan visits Aquinas a week from Friday. That baby has State Championship overtones.

*Tyler Brown-Henderson Heartland - Rushed for 200 yards on only 6 touches and scored on half of those carries, hitting pay dirt form 57, 69, and 40 yards out. Huskies torched Cross County 68-14 as Brown raised his 2014 rushing total to 934 yards.

*Trey Taubenheim-Amherst - (5-10, 175, QB/DB, Junior) #3 - Taubenheim, who usually can either opt to throw or run, kept it grounded to the tune of 188 yards and 2 Tds in a 41-17 win over Twin Loup. Coming into the Twin Loup game, the junior sharpshooter had completed 19 of his 36 passes for 664 yards and 16 touchdowns and NO Interceptions. That's an 80% completion rate and 23 yards every time he nails a receiver. Question of the day is: When will Amherst ever run out of Taubenheims? Never saw a Class D school with so few kids be good in both Basketball and Wrestling at the same time. Think about that one.

*Kyler Wormstadt-Adams Central - Came up huge (again) in the Patriot's 22-15 win over Hastings High. Wormstadt ran for 257 yards on a grueling 48 carries in the win. This kid ran for only 119 yards in A/C's 1st three games and has exploded since the Patriots went back to former head coach Bill Carlin's Maryland-I. Wormstadt now has 843 yards for the season and I'll just betcha he hits that 1000 yard mark before it's over......and he's only a junior. By the way, it's alright to go back to something Bill Carlin ran during his years, fellas. His teams missed the playoffs only ONE TIME in his gazillion years at Adams Central and that's with jumping back and forth from Class B to C-1. Carlin was, and always will be The Master, just like his high school coach, the late and venerable Ed Colleran from Spalding Academy. Coach Colleran's football teams were 169-84-8 during his illustrious career. His basketball teams were 648-169. Mr. Colleran wasn't even a teacher when he coached for years and finally became one in later life when the NSAA required it. Best rural mailman/coach ever in history in Nebraska. They just don't make them like Coach Colleran any longer and Bill Carlin is a chip off the old block.

and....in the peak of all your successes, acknowledge a compliment.