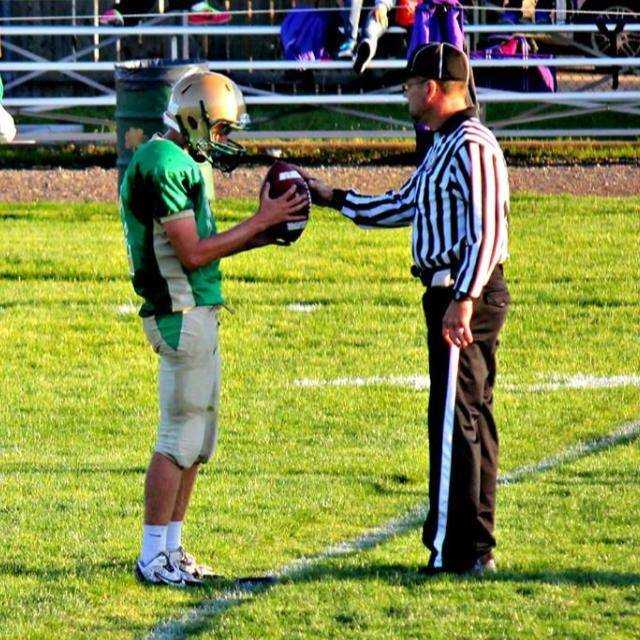 *Wyatt Tremayne-Homer - Class C-2's most versatile football player was outstanding last Friday as he led his Knights to a convincing 49-12 win over Laurel-Concord-Coleridge. Tremayne bolted for 302 yards on 27 carries and 4 touchdowns. Tremayne was also a standout on defense, recording 14 unassisted tackles. For the season, Tremayne has run for 885 yards on 99 carries, completed 61 of 96 passes for 592 yards, made 66 tackles (48 all by himself) and averaged 40 yards every time he punts the football. And all this while directing a 2-3 Homer team. One of my favorite players of 2014.

*Payton Nelson, Calvin Strong, Tavion Seals, and the Omaha North O-Line - Top rated Vikings turned the highly anticipated battle with Creighton Prep into a laugher during the opening quarter by laying 26 points of the Junior Jays. QB Payton Nelson shredded the Prep defense with 3 touchdowns in that 1st quarter and ended up throwing only 6 times, but connecting on 5 of the tosses for 190 yards and scoring passes of 30, 41 and 74 yards. Strong, who ran for a state record 3,008 yards a year ago, scooted for 135 yards on 17 carries and scored on 10 and 11 yard runs. Backup Tavion Seals had only 4 rushes in the game but gained 118 yards which included a 3rd quarter 80 yard TD jaunt.

And that Omaha North offensive line? May be none better in Class A.

*Marcus Eichmann-Diller-Odell - 6-0, 190 pound RB/LB ran for 126 yards on only 9 carries in the Griffons 58-16 pounding of Pawnee City. Eichmann scored on 58 and 6 yard runs and returned a kick-off 70 yards for another as Diller-Odell bolted to a 44-0 halftime advantage.

*Sean Lambert-Fremont - Junior RB sped to 201 yards on 27 carries in a 35-3 win over Lincoln NE. Lambert, who has rushed for 530 yards and a 7.2 average per tote this fall, scored on 62 and 3 yard runs in the game last Friday. The Tigers improved their season record to 3-2 and host Grand Island this week with a chance to make some noise.

*Dylan Price-Millard North - Seemed to appear out of the nowhere to rush for 189 yards on 23 carries in the Mustangs 38-3 win over Lincoln North Star. Prior to the win, Price had run for only 22 yards in Millard North's previous 4 games. Jacob Matthew, the 230 pound battering ram, added 135 additional yards on 12 carries and had TD jaunts of 10 and 75 yards in the contest. Matthew's 2014 rushing total stands at 565 yards at the moment.

*Dan Harden-Hastings St. Cecilia - Ran for 127 yards on 27 carries and scored on runs of 2 and 3 yards in the Bluehawks 21-0 win over Doniphan-Trumbull. Holy cow it seems like somebody different comes up big for Carl Tesmer's St. Cecilia team each week. Suppose that's why Carl has won over 300 games in his career? And to think that I had the pleasure of playing in the backfield with him at GICC for two years. Thank you, Lord.

*Thomas Spilinek-Arcadia/Loup City - Left Guard was converted to fullback and responded for 124 yards on 18 carries in a 29-14 win over Ravenna. The 5-10, 165 pound Splilinek, only a junior, has made 36 tackles and recorded 5 sacks on defense in 2014 to increase his value to A/LC. Speedster Jordan Hovie added 119 yards on 8 carries and scored on 55 and 32 runs for the new co-op. Ravenna's outstanding Blake Chromosta was his usual self, running for 177 yards on 24 carries in the loss. Chromosta scored both Bluejay TDs on 16 and 14 runs.

*Riley Dorch-Lincoln Pius X - 160 RB rushed for 134 yards on 21 carries and scored on a 39 yard sprint in the 'Bolts 20-8 win over Omaha Gross. The "W" was very special as it marked the 200 career win for Thunderbolt coach Tim Aylward.

Kyle Jensen-Exeter-Milligan - Twice an all-state man, Jensen scorched the Giltner defense for 357 big ones on 35 carries as the Timberwolves outscored Giltner 76-62. Yeah, that's right. Giltner's QB Ben Hinrichs brought the Hornets back in the second half and finished the night by completing 34 of 42 passes for a whopping 535 yards. For good measure, Hinrichs rushed for 101 yards. Giltner's Nick Preissler had 13 receptions for 242 yards and teammate Brett Good added 10 catches for 164 yards. The 2 teams combined for over 1,200 yards of offense......a defensive coordinator's nightmare.

Ethan Cox-Blair - (5-10, 160 QB/LB) #2 Sophomore - The ice water veined kid calmly completed 16 of 25 passes for 323 yards and 3 scores against an Omaha Skutt defense nobody imagined could be penetrated. Also made 6 tackles on defense in the stunning upset. The Bears leaned on RB Ian Mertick to pound the Sky Hawk defense in the 2nd half, as he ran for 96 yards on 20 touches and scored 3 times. Blair is just 2-3 this fall but you have to take your hat off to Coach Brian Soukup and his staff for orchestrating this shocker. Unbelievable.

*Jalon Sturdivant-Maxwell - (5-9, 180, RB/LB/K) #25 - Call him the Renaissance Man. In a huge 56-42 win over arch-rival Brady, Sturdivant rushed for 281 yards on 34 totes and had 55 yards in receptions totaling 4 Tds in all. The splendid senior also intercepted 2 passes, kicked a 32 yard field goal, booted 4 extra points, and drove the bus home, cleaned it out, parked it and called it a night.

For the season, Jaylon Sturdivant has run for 530 yards, 9 touchdowns, hauled in 5 passes for 118 yards, made 39 tackles, averaged 32 yards per kick return, kicked 7 of 9 point after attempts and simply been amazing for 3-1 Maxwell.

*Gaige Marshall-Hershey and Drew McClellen-North Platte St. Pats - In a Battle Royal of two the the West's best C-2 runners, Marshall ran for 157 yards on 19 carries and scored on 24 and 4 yard runs. Gaige also electrified the crowd and shocked the Irish with a 99 yard kick return, which is rare against St. Pats considering the fact Drew McClellen usually boots every kick-off into the opponent's end zone. On this one though, the opportunistic Marshall just reached out and grabbed the ball before it skipped into the end zone, followed his wedge and went the distance. Drew McClellen wasn't far off Marshall's pace, rushing for 157 yards on 20 touches. The all-stater scored on a 91 yard run, caught a 24 yard pass for another TD, and kicked field goals of 42 and 29 yards in the 50-20 win over Hershey.