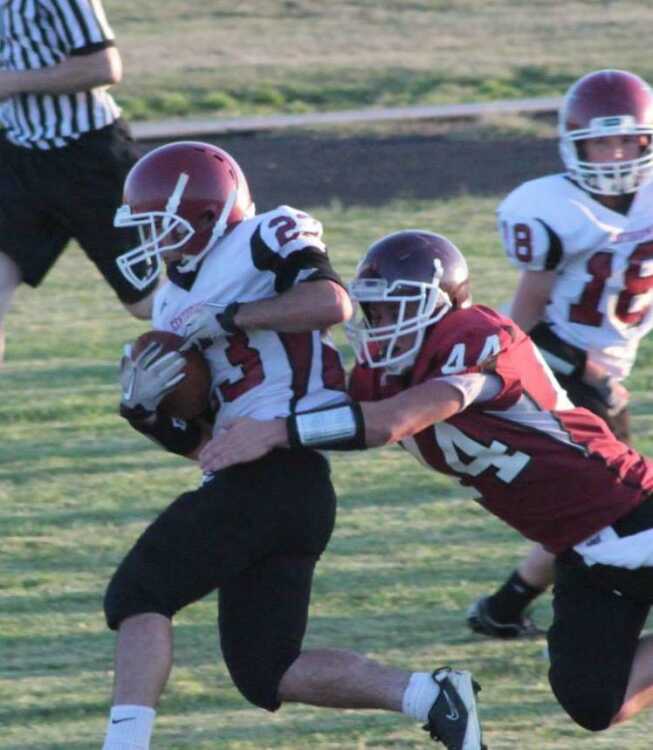 Not only are players performances continuing to amaze and astound football fans throughout the state, but crazy happenings are popping up every week (see Blair 45-28 over Omaha Skutt) that make it nearly impossible to predict a state champion in any class. And those who think they have a formula in place to make these prognostications are, as of right now, considered in the genius category.

Isn't that just one of so many things that make high school football such a kick. Only problem is deciding where to go and who to watch. So many great match-ups every week it seems.

Now on to the Heroes of Week 5 and they are so numerous, we need 2 parts to cover 'em all.

*Kyler Wormstadt-Adams Central - (5-11, 175 RB/LB) #21 - Tough running junior beginning to round into form the past 2 weeks for the Patriots. After being raised to the Class B ranks this season, A/C had a rough go the 1st three outings, coming up empty in the win column. But after rushing for only 122 yards the 1st 3 games of the season, Wormstadt shook loose for 167 yards against Scottsbluff 2 weeks ago, and followed it up with a 251 yard/30 carry performance in Gering this week. The Patriots frolicked in a 41-12 win over the winless Bulldogs as the talented junior increased his season total to 540 yards, 418 the past 2 games. Adams Central will try and extend the wins to a second week when another West opponent, Alliance comes to town this Friday.

Jordan Heinrichs, Keshawn Camacho, Tyler Brown-Henderson Heartland - The Three Horseman were at their best in a 82-36 blasting of a good High Plains team last Friday in Henderson. Heinrichs, the senior QB, rushed for 243 yards and scored 2 Tds in the huge win. Camacho the Fb, ran for 189 yards on 15 touches and scored 3 times. Ty Brown, the IB, was right of Camacho's pace with 183 yards on 13 totes and a touchdown in the route. Brown now has 600 rushing yards on the button, Heinrichs-525, and Camacho 369. The Huskies rushed for 634 yards in the High Plains win. Heinrichs had an amazing 26 tackles in the game and has been a starter at the QB position since his freshman season. Think he knows the system? What a player.

*John Pfeifer-GICC - 5-10, 180 pound senior rushed for 138 yards on 16 carries and pirated 2 passes in a 22-19 Crusader win over Central City at GINW Friday. Pfeifer is faster than you think and seems to be improving each and every week. Central City's Brady Bamesberger caught 8 passes for 127 yards and an 11 yard score in the loss. Sharpshooting Bison QB Mitch Carlson, only a junior, connected on 16 of his 34 passes for 213 yards in the loss. Carlson, who puts up 32 passes a game, has already thrown for 1,239 yards in 2014.

*Jake Kittle-Aurora - (6-0, 180 QB) #10 - Went over the 1000 yard passing mark and was one of the main reasons the Huskies were able to pull off an incredible 20-19 comeback win over 3rd rated McCook at the Aurora homecoming Friday. Kittle ran 32 times for 160 yards and scored on runs of 1 and 12 yards. The slick signal caller also completed 20 of 36 passes for 227 yards and threw a 2 yard TD strike to Austin Allen with 20 seconds remaining in the game. Huskies had to go for two trailing 19-18 as Kittle calmly hit Trey Cox for the 2 point conversion and the 20-19 advantage. McCook all-state kicker Bryce Lyons missed a 58 yard field goal that had the distance, but was wide, to end the game. Aurora basketball whiz and speedster Todd Honas latched on to 8 of those Kittle passes for 105 yards for the night. Kittle now has thrown for 1,175 yards and 9 Tds, while adding an additional 348 rushing yards. Honas, the 180 pound junior, has hauled in 31 receptions for the year thus far for 582 big ones.

*NOAH JOHNSON*-Sutton - Continued on his 2014 rushing rampage by rolling for 275 yards on 33 carries and 5 TDs in the Mustangs 32-0 whitewashing of Sandy Creek. Johnson now has an incredible 1,463 yards in 5 outings and is averaging 12.9 a touch. Throw in 24 touchdowns and this guy make a case for one of the state's best running backs in 11-man football. Johnson and Sutton might get their 1st test of the year when they visit Doniphan-Trumbull this Friday. Payback time for the Sutton team when they hit the field against the Cardinals this week. I saw one 11-Man state rushing record on that same football field a few years back.

*Millard West Bench - How 'bout these apples? In the Wildcat's 44-24 win over rival Millard South at Buell Friday, Millard West had 2 rushing touchdowns from backup quarterbacks, and three more from reserve running backs. Not kidding. As far as the QBs, starter Logan Anderjaska goes down with an injury early and is replaced by Dylan Hike. Hike then is injured and in comes Jake Kistaitis who scores on a 2 yard run to give West a 9-6 halftime advantage. Hike then feels good enough to start the 3rd quarter and finds the end zone from 2 yards out to extend their lead to 16-6. Hike then scored on another 2 yarder, running behind that huge 'Cat line.

As far as the RBs. Hard running Thomas Russell exits in the first half with a knee injury and is replaced by reserve Dylan Hughes. Hughes scores in the 4th quarter on a 14 yard run, then HE LATER EXITS WITH AN INJURY. Enter junior Cody Janke, who ended up rushing for 119-13 carries. Janke scores on a 23 yard dash with 2:30 left in the 4th to ice the 44-24 win.

One could say Kurt Peterson has a deep bench this season.

*Trevor Polivka-Lincoln Parkview Christian - Quarterback decided to put on a 1st half passing clinic, then switch gears to display his running talents after halftime in a 62-34 win over Sterling. Polivka, a slick senior, threw TD strikes of 20, 7 47, and 20 yards in the first half. Trevor decided to keep it on the ground in the 2nd half and scored on runs of 4, 32, 46, and 64 yards while rushing for for an astounding 376 yards on 32 carries. For the game Polivka completed 14 of 29 tosses for 146 yards and those 4 TDs. That's 8 touchdowns if my math is correct. He also had 10 tackles, intercepted 2 passes and recovered 2 fumbles. No, I'm not fabricating this one. During this 2-2 season as the only returning starter, Polivka has completed 30 of 60 passes for 375 yards and 6 scores. The 144 pound senior has also rushed for 748 yards on only 70 carries and scored 11 TDs and made 33 tackles from his linebacker slot. On the roster he listed listed as a QB, LB and ATHLETE. Gee I wonder why?

*Levi Rosenquist-Centura - (5-8, 175 RB Sr.) #23 - Try this one on for size. This splendid, pure football man plays for a team that not won a game in 5 tries and only scored 6 TDs all season. Yet Rosenquist has rushed for 730 yards and scored twice. Last week in a 12-6 double overtime loss to a hard hitting Twin River squad, Rosenquist ran an unthinkable 47 times and gained 270 yards. This young man with the heart of a lion, is ranked 5th in rushing in C-2, ahead of backs like Bridgeport's Wyatt Pankowski, Kimball's Jonathan Withrow, Battle Creek's Jordan Zautke, North Platte St. Pat's Drew McClellen and Fremont Bergan's Tristin Logemann. Unbelieveable. I call him Mr. Rosenquist!

*Spencer Humphrey-Columbus - QB completed 15 of 26 passes for 230 yards and 2 TDs. Both scoring receptions were hauled in by Blake Buback and covered 8 and 25 yards. Discoverers beat Omaha Burke 21-17 and scored all their points in the 2nd half. My son, Coach Rob Micek, reports that Blake Buback is a very good player for Columbus.

*Jesse Faltys-Howells-Dodge - (6-1, 205, RB/LB) #9 - Against rival Clarkson-Leigh, the punishing Faltys blasted through the C/L defense for 226 yards on 29 totes and 5 TDs. Scoring runs of 19, 10 and 16 yards came in the 1st half while Faltys hit paydirt for 47 and 9 yards out in the 2nd half in the Jaguar's 54-32 win. Faltys, who didn't carry in the opener against Cross County, has rushed for 589 yards and 13 TDs in the last 3 contests for Mike Spiers forces. Jesse is also a beast on defense, recording 41 tackles and also averages 17 yards per kick-off return. Just another in a long, long line of Howells-Dodge football standouts.

*Carson Huenefeld-Nebraska Christian - 185 pounder exploded for 305 yards and 4 Tds in a 60-34 win over Cedar Bluffs. Huenefeld had run for 272 yards in 3 games before the outburst.

*Cody Cassidy-Burwell - In a 46-14 blasting of South Loup, Cassidy rushed for 186 yards on only 13 touches. That's 14.3 a tote friends. The Longhorn RB has rushed for 460 yards thus far in '14. Have you noticed that Burwell Always has a great running back? Their head coach, Luke Gideon is one of the best in the biz.

*J J Oltmer-Humphrey St. Francis - 195 pound, 2 year all-state/1000 yard runner was back and after 'em in the Flyers 76-6 pasting of Palmer. After sitting out most of last week's game, Oltmer rushed for 163 yards in 13 carries and scored 4 times in the easy win.

*Wyatt Mazour-Boone Central/Newman Grove - All-State player continued his sizzling pace by bolting for 190 yards on 16 touches in a 30-6 win over an improving West Point-Beemer team. Wyatt is already up to 644 rushing yards in 5 games. Cardinals host Pierce Friday.

*Noah Valasek-Riverside - In a 6-Man, 75-33 win over St. Edward, Valasek ran for TDs of 17 and 4 yards, threw TD passes of 45 and 46 yards to Collin Martensen, and an 8 yarder to Jake Kennedy. Valasek also caught 13 and 28 yard TD pass from Martensen and returned an intercepted pass 15 yards for another score in the win. Riverside is a new co-op comprising Cedar Rapids and Spalding High and has an outstanding head coach in Joey Imus, a former all-state football AND basketball player form Albion. Imus is also one of the best small school basketball coaches you'll find anywhere and had one of the most thunderous dunking skills around as a prepster.

*Jake Palensky-Raymond Central - (5-10, 190, RB/LB) #9 - Despite his team losing to Lincoln Christian 41-21, Class C-1's top running back rushed for 330 yards on a tiring 45 carries and scored on runs of 12 and 67 yards. Palensky's 738 yards in 5 games leads C-1 in rushing. Lincoln Christian's Nate Bubak, a Husker recruit and a junior, rushed for 128yards on 17 carries in the game as the Crusaders totaled three runners over the hundred yard mark in the win. Noah Free ran for 107 yards on 14 tries and Tanner Schwaninger added 100 yards on 12 totes as Christian tore up Raymond with 502 rushing yards. The Crusaders also had zero turnovers and didn't punt once in the game. By the way, Palensky's 330 ground yards eclipsed the old school single game rushing record of 310 yards as the talented senior touched the ball on 45 of Raymond Central's 68 plays in the contest. I'll bet Jake slept well Friday night.

***I want to say farewell to one of the finest broadcasters in Nebraska, Brad Fossberg. Brad lost his battle to cancer Saturday and was one of the most unbiased and talented sports, as well as news men in Central Nebraska and far beyond. Not many like Brad Fossberg and his superb talent and professionalism will be sorely missed. A truly genuine human being, Brad left a mark and his legacy will live on forever. RIP, my friend.***