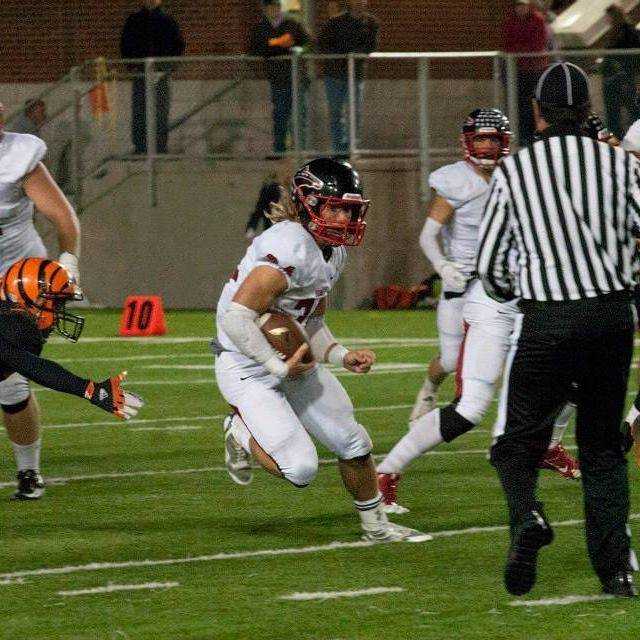 Sidney's Chance Anglin runs for daylight. The Red Raiders will be in McCook Friday.

*Chance Anglin-Sidney - Watched this marvel up close last Friday against Hastings and went away impressed to say the least. The 5-8, 175 pound Anglin, who ran for 1,296 yards a year ago, broke loose for runs of 77 and 71 yards on his way to 249 yards on 21 carries and 5 touchdowns. Anglin also intercepted a pass as the Red Raiders improved to 3-0 with the 40-20 win. His other scoring runs were of 5, 4, and 5 yards. Chance Anglin, along with McCook's Trevor Matson and Scottsbluff's Ty Benson, combine to make a Class B trio of RB's that are pretty scary out West. Remember Sidney visits McCook this Friday.

*Wyatt Tremayne-Homer - Oh well, just another day at the office for the curly haired whiz that can do it all. In a 54-27 beating of Logan View, Tremayne ran the ball 22 times for 269 yards and SEVEN Touchdowns. Now hold on. The QB also completed 15-21 passes for 153 yards and a TD. So, after only 3 games, Wyatt the Riot has 583 yards rushing (12 TDs), 549 yards passing and 27 solo tackles and 36 total stops.....that's 63 tackle points already. I suggested that Homer move one of their games to the field I used to take care of here in Senior High here in GI. Haven't heard back yet.

*Brandon Stevens-Spalding Academy - Blitzed Hyannis with 13 of 15 passing accuracy that was good for 261 yards and 5 TDs. Backfield buddy Joe Glaser rushed for 102 yards on 12 carries in the 57-14 route of the Longhorns. Shamrocks led 44-0 at the half in the 6-man afternoon contest. So now the #1 and #2 teams in 6-man have been riddled by Spalding Academy on successive weeks. If you knew head coach Troy Kleffner, this entire "shocking" deal may not be such a surprise. The man knows the game of high school football and obviously the 6-man variety.

*Jake Kadow-Hastings St. Cecilia - Good grief, could the 6-1, 180 pound senior have done anything else in the Bluehawk's 42-7 win over Fillmore Central? Kadow returned a punt 60 yards for a score with 1:13 left in the opening quarter. Prior to that he caught a 59 yard TD pass from Grant Schmidt. In the 2nd quarter, Kadow hauled in a 60 yard scoring pass from Schmidt, then escaped on a 64 yard run to the house. A week ago Kadow returned a punt 85 yards for a score against Hershey. How many other ways are there for this kid to score? I'm sure we'll find out.

*Tristin Logemann-Fremont Bergan - Getting to be a regular in this blog. Last week in the Knight's 59-20 triumph over Palmyra, Logemann rushed for 166 yards and scored 5 TDs, tying the one game record co-held by his own had coach Seth Mruz, a bruising 1000 yard runner not so long ago. The 6-0, 185 pound senior, who stepped in the QB role a year ago when Luke Kerkaert went down, scored on runs of 10, 15 and 66 yards in the Palmyra game and also blocked a punt and scored. Oh, almost forgot, he also hauled in a 47 yard TD pass too.

*Noah Johnson-Sutton - Nebraska's leading prep rusher, Johnson added 210 yards on 21 carries as the Mustangs destroyed another opponent. This time it was Tri-County 44-6. Noah Johnson now has 845 yards in three games, an average 11.9/carry. A stellar line in addition to a blockbusting, ferocious blocking 220 fullback named Tristen Sheridian help pave the way for Johnson. 3 of the mainstays in that Sutton line are the "Garretts", juniors Garrett Stone (6-0, 200) and Garrett Clark (5-11, 260) another junior, 6-0, 180 pound Jared Lemkau.

*Trent Geiser-Anselmo-Merna - 5-6, 160 back, who missed most of last season with a horrible elbow injury, rushed for 225 yards on 28 touches and scored 4 TDs in the Coyotes impressive 64-40 win over a fine Bertrand team. Geiger had rushed for 1,626 yards and scored 22 touchdowns as a sophomore for A-M. 140 pound QB Troy Gilligan, who ran for 1.329 yards a year ago, completed 6 of 12 passes for 154 yards and a score and ran for 131 yards on 21 carries with 3 TD runs in the Bertrand game. So good to see Geiser healthy and now you know why Anselmo-Merna has one of the most feared backfields in 8-Man football along with one of the top coaches around in Matt McGinn. The Coyotes have a big game this Friday at Elwood.

*Grant Norder-B D S - Oh MY! Nobody, I repeat, nobody could have predicted that BDS would break a 36-36 halftime tie with Giltner by scoring 46 second half points while blanking the Hornets for an 82-36 win. That's 18 away from a 100 folks. Norder, a big, tough, extremely bright quarterback and defender, rushed for 179 yards on 24 carries and scored on runs of 1, 14, and 18 yards and returned an interception 52 yards for a score to open the 2nd half and open the proverbial flood gates. Norder, an all-state selection a year ago, also completed 10 of 12 passes for 183 yards in the route. Riley Tegtmeier added 118 yards on only 9 carries and reached the end zone on 4 of those touches with runs of 43, 8, 45 and 22 yards. Can anybody beat this BDS bunch?

*Dylan Loberg-Randolph - Swift, powerful running back ran for 283 yards and scored on runs of 52, 51, 2 and 35 yards in an impressive 66-22 win over a good Bancroft-Rosalie team. Loberg has 512 yards in 2 outings and yes, Nebraska is interested in this young man.

*Noah Lazaro and Mitch Conklin-Lincoln SW - The Silver Hawk duo made good use of their sparse playing time against out manned Omaha Northwest. Lazaro touched the ball only 4 times but three went for TDs on runs of 32, 49, and 56 yards. Oh yeah, the other non-scoring, "boring" run was for a measly 11 yards. Conklin touched the ball only 3 times but had a 95 yard run and caught a simple 45 yard screen pass on the 1st scrimmage play that went the distance. Southwest led 49-7 at the half, on their way to the 56-21 win.

*Thomas Russell-Millard West - Russell is getting better every week for the 'Cats. In their 42-21 win over Lincoln East, Russell ran for 162 yards on 21 totes and scored on runs of 8, 69 and 7 yards. In addition, he caught a 32 yard scoring pass. Russell looks like maybe he will end up being the 1000 yard rusher Kurt Peterson wished he had a year ago.

*Grand Island Defense - Stymied the Omaha Burke offense in a 28-6 win. That staunch Islander defense limited the Burke running game to 99 yards and forced a 4-21 passing performance from Bulldog QB Huntore Monroe. Monroe was only able to throw for 66 yards and suffered 2 interceptions in the game. GI quarterback Pierce Almond threw for 210 yards and 2 TDs on 14 of 22 passing in the win.

*Tony Meusch-David City - 5-10, 160 pound two year backfield vet ran for 154 yards on 30 carries and scored the Scouts touchdown on a 55 yard dash in the heartbreaking 8-6 loss to Milford/Dorchester. David City has a brutal Thursday night home game against Norfolk Catholic this week. Meusch will have to take a double dose of his vitamins this week.

*Jake Mumby-Elkhorn Mt. Michael - On a magic night when the Knights unveiled their brand new football facility on the "Mount", Mumby rushed for 111 yards on 13 carries and scored runs of 17, 52 yards and had a TD reception of 67 yards from QB Jake Batenhorst. EMM is now 3-0 for the season and has won more games in three weeks than they have won the past 3 and half seasons. It's time for a round of applause for this program. I love it! Killer Kane is smiling from above.

*Kolton Carlyle and Cody Blackwell-Paxton - Runners teamed up to turn back Sutherland 46-20. Carlyle ran for 144-18 touches and scored twice. Blackwell rushed 14 times for 126 yards and also scored twice for the 1-1 Tigers. Mark that calender, Brady and Maxwell are on tap the 1st 2 weeks in October.

*Austin and Preston Schnitzler-Kenesaw - Here we go again and it couldn't happen to 2 more deserving young men who have had their sour luck with major injuries. The Blue Devils rolled a very potent Overton team 57-20 last Friday and Austin rushed for 156 yards on 20 touches and scored 5 times. The younger Preston (a junior) carried 18 times for 153 yards and scored twice in the win. For the year, Austin has run for 555 yards and 11 Tds, while Preston's 3 game total is 495 yards and 8 Tds. He also has 27 tackles to date. You can almost forgive the 52-26 opening game loss to powerful defending D-1 champ, Exeter-Milligan and keep in mind this Kenesaw team will be a force to be reckoned with the rest of the way in D-2.

*Gaige Marshall-Hershey - Powerful Hershey back ran for 127 yards on 14 touches and scored a TD in the heartbreaking 22-20 loss to Doniphan-Trumbull. Marshall has run for 488 yards in 3 games against tough competition. He's a good one to say the least.

*Tyler Brown, Keshawn Camacho, Ben Driewer, Jordan Heinrichs-Henderson Heartland - Huskies nearly had Four 100 yard rushers in a 60-38 win over a good Nebraska Christian squad. Heinrichs, Brown and Camacho, 8-Man's version of the 3 Horseman, could end up with a 1000 yards each when it's all said and done in 2014. In the Christian game, Brown ran for 151-13 carries and scored on 9 and 57 runs. Camacho, the FB, rushed 10 times for a 136 yards and scored on a 74 Run, plus hauled in a 17 yard TD pass. Driewer, a sub, carried 9 times for 113 yards and scored on runs of 34 and 54 yards for the Huskies. This Friday we will be on hand when Blue Hill takes on this Heartland team in Henderson.

*Spencer Powell-McCook - Came through when Scottsbluff keyed on 1000 yard back Trevor Matson. Powell rushed for 117 big ones and scored on runs of 2 and 10 yards in the comeback 24-14 win at Scottsbluff. The Bison are rolling.

*Hunter Smith-Omaha Skutt - 5-11, 190 pound RB is starting to heat up for the Sky Hawks, who steamroll everyone in their path it seems. In Skutt's 46-14 win over highly regarded Crete, Smith blasted for 182 yards on only 15 carries and scored touchdowns on runs of 31 and 47 yards. Hunter has 472 yards already this fall and the senior may just have a 13 game season the way it's shaping up. Man, Matt Turman is a great coach, wow!

*Carter Zlab-Wilber-Clatonia - Mr. Do-It-All ran for 126 yards on 9 carries and raced to the house on runs of 22 and 41 yards in the green and blacks 49-14 win over Johnson County Central. Wilber-Clatonia is good friends.

Garrett Sonderup and Seth Wetovick-Fullerton - Each ran for an identical 121 yards on 8 totes in the Warrior's 58-0 trouncing of Central Valley (Greeley-Wolbach/North Loup/Scotia). Sonderup, who has run for 382 yards in just 2 games, scored 3 TDs while FB Wetovick rushed for 2 scores.

*Dash Cameron-Tekamah-Herman - Had 150 yards on just 5 receptions in that loss to Oakland-Craig. This guy is really, really talented.

"We Wish You Well" Department - Was just broken hearted to hear the heart wrenching news about North Platte's splendid senior quarterback, Shane Mauch, one of the state's best. Mauch suffered a broken right hand and torn ligaments around his thumb on an 8 yard carry to open the game with Kearney last Friday. Mauch will miss the rest of the season. North Platte, who was winless a year ago, had opened 2014 with 2 straight wins and had high hopes for a successful campaign. Here is a quote form the very fine daily newspaper, the North Platte Telegram concerning the Mauch injury:

"The injury occurred on an 8-yard run by Mauch to open the game. The senior quarterback stayed in the game for two more plays after suffering the damage to his throwing hand.

"After it happened, I wasn't in any pain at all and then on the next play I went to grip the ball and I couldn't," Mauch said. "It felt like there was a hole in the ball, and then I looked at my hand and could see the bone."

We wish this outsanding young man and team leader a speedy recovery and hope we see him on the hardwoods this winter for the Bulldogs. Sometimes life just doesn't fair.