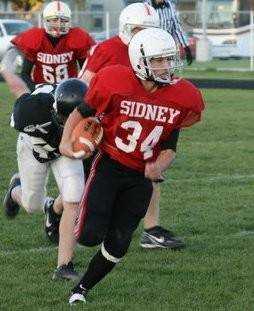 It took Sidney head coach Todd Ekhart only two plays into the 2nd half to put the ball in the hands of his bread and butter running back. After leading only 14-7 over a determined and rejuvenated Hastings high football squad at the half, 1000 yard rusher Chance Anglin took a pitch, ran right, and set sail on a 71 yard highlight reel touchdown run. The sweet, long distance run to the house by Anglin, his second of the game, seemed to pave the way for the Red Raiders taking control of the football game. The Red Raider invaders from west built a 34-7 lead early in the 4th quarter and seized control to post a 40-20 "W". The Raider defense chopped 150 yards off off Hastings quarterback Vinny Schmidt's passing total from a week ago, but the Tigers kept Sidney on their toes with the barrage of passes. Although Sidney did a nice job with the pass rush, recording 3 sacks and 6 QB hurries, the nimble, scrambling Schmidt, all 138 pounds of him, was difficult to reach in the backfield at times.

Sidney started their first 2 possessions in Tiger territory, driving to the Hastings 8 before being halted on a 4th and 2. But the second time around, QB Lane Harvery fired a completion to speedy Michael Muggli for a 22 yard gain that carried from the 42 to the Hastings 20. Three plays later, hard running Hunter Seacrest (175, Jr.) banged it in from the 5 yard line to give Sidney the opening lead. Chance Anglin ran it in for the double point conversion for the 8-0 advantage. That's the way the score ended after the first quarter.

The Tiger offense fashioned a nice offensive drive to open the 2nd stanza aided by some awful tough running by lightweight 145 pound RB, Philip Pedroza and some spot on passing by Vinny Schmidt. The Sidney defense seem to catch some extra fire when they were called for a roughing the passer penalty that moved the ball to their 11. The Red Raiders stuffed the drive at their own three then the blond bomber took over. After being stopped to a minus 2 yards on his first 3 touches, Chance Anglin dizzied the Tiger defense with a tackle breaking, cutback, turn on the jets 77 yard sprint to the North end zone. Sidney had the 14-0 lead with 6:12 left in the 2nd, but Hastings wasn't finished.

On the 3rd play of their ensuing drive, Tiger QB Vinny Schmidt suffered an interception when Garrett Deer picked off the errant throw. With a 1st and 10 on the Hastings 34, Sidney QB Lane Harvey returned the favor when he threw a pick to outstanding WR/CB Sam Reimer who was tackled at his own 5. The Tigers proceeded to take it 95 yards in 3:26 seconds to score a touchdown and pull within 7 points at the half. It was a crazy drive that had a few folks shaking their heads in the Sidney stands. On 1st down at their own 30, Hastings gunslinger Schmidt unleashed a sky scraper that was pirated by Chance Anglin and returned to the Tiger 5. But it was ruled that a Red Raider defender was called for pass interference on the play, nullifying the interception. On the very next play, Schmidt promptly nailed Jr. WR Bryant Menke on a 48 yard gain all the way to the Sidney 7. Two plays later Schmidt again found Schmidt for a 9 yard TD strike.

The teams went to the break with Sidney on top of Hastings 14-7.

On that pass interference call on the last Hastings drive, I'm not certain who the call was accessed against on the Sidney defense. It appeared that the call was made on a defender covering a receiver that had a pass clearly thrown over his head and seemed uncatchable.

Here is the rule concerning that situation:

"If the pass is deemed to be "uncatchable", pass interference rules do not apply

in American college football or the NFL, and starting with the 2010 season they

After the dazzling 71 yard Chance Anglin run to open the 3rd quarter, Sidney would add another touchdown on a Lane Harvey 4 yard scamper. Harvey aided his own cause with a slick 40 yard pass completion to the fleet wheeled Anglin. The was set up with an interception by....you guessed it, Chance Anglin.

With just 21 seconds gone to begin the 4th, Anglin scored his third TD of the damp, chilly evening on a 5 yard blast stretching the lead to 34-7.

Hastings, refusing to fold, bounced right back with a 7 play, 63 yard drive culminating with a 34 yard scoring pass from Schmidt to a streaking Bryant Menke. The following drive Sidney running back Jake Heeren appeared to be off on a nice run when the ball was poked out of his grasp from behind. The Tigers recovered at their own 32 and it was the Vinny Schmidt/Bryant Menke show from there. After an incomplete pass, Schmidt ran for 9, then 8 yards, then fired pass completions of 32 and 8 yards to Bryant Menke. After an offside penalty on the Tigers moved the ball back to the Raider 18, Schmidt calmly pulled the trigger on an 18 yard TD pass to Menke. The play pulled Hastings within 34-20 with 4:18 left in the contest.

Sidney's offense put the kibosh on anymore comeback ideas Hastings entertained by draining the Lloyd Wilson Field clock on a 12 play drive that saw Chance Anglin score the final TD of the night on a 5 yard burst. With 34 seconds left, the Red Raiders had secured the 40-20 victory.

The 175 pound Anglin certainly presents a strong case to laying claim to being the best running back in Class B. Operating out of the slick, misdirection Red Raider double-wing offensive formation, Anglin can get rolling on reverses in a hurry. #34 can plant and change directions in an instant and turn on the after burner jets in a one kick burst. His acceleration and speed with that ability to find a path to the end zone is uncanny. Chance Anglin also has tremendous leg strength and power for a 175 pound man and the pad level this young man has is a coaches dream. Anglin's Houdini stop and go game makes some defenders look silly. Not a good idea to tackle him high.

Anglin ran for 249 yards on just 21 carries and scored 5 times on the ground. Running mate Hunter Seacrest rushed 17 times for 71 yards to aid the Red Raider cause. Signal caller Lane Harvey completed 5 of 11 passes for 91 yards but was picked off twice by Bryant Menke. Sidney totalled 476 yards in the 40-20 win.

Hastings was led by sophomore quarterback Vinny Schmidt, who completed half his 42 passes for 287 yards and 3 touchdowns while suffering 2 interceptions. The Tigers tough running back Philip Pedroza gained 81 difficult yards on 21 carries but left the game on 2 different occasions with injuries. The Tigers ended up with 123 rushing yards for a total offense of 410 yards.

I like this Hastings football team. They never quit. This is Class B football and when you have a QB that weighs 138, RBs that weigh 136 and 145 respectively and a 135 pound safety (Josh Dycus) making plays, that tells you something about the heart of this Tiger team. In addition to Dycus on defense, I thought #10, Blayne Dreher, a 164 sophomore linebacker was excellent. #63 Jeff Keele was an unwelcome guest in the Sidney backfield more than once and LB Michael Collicott (162, JR) and of course WR/CB Sam Reimer (170 JR) was everywhere.

For the Red Raider defense, Kane Taylor, Jake Sager and Tyler Wintholz each sacked Schmidt one time while #55 Brian Rolls was in on 16 tackles and probably caused the Tigers unpleasant dreams last night. Hunter Seacrest recorded 8 solo tackles and can bring the wood and did.

Sidney moves to 3-0 and will face a 3-0 McCook team who rallied to beat Scottsbluff 24-14 last night. That game is in McCook. Hastings (1-2) will stay at home to face a 2-1 Aurora team who appeared to have struggled a bit in a 26-13 win over winless Adams Central.